At a rooftop cafe in the center of Athens, Eleni Myrivili stared up at the sky on Tuesday as white ash dropped from a thick, gray cloud of smoke that hung above her and covered much of the Greek capital’s skyline.

“It's very ominous,” Myrivili said as the ash fell on her hair and in her drink. “It feels like this might be a prequel to what the future of this city might be like.”

Southeastern Europe is experiencing one of its worst heat waves in decades. And officials are working to put out wildfires across the region in Greece, Italy, Croatia, Albania and Turkey. 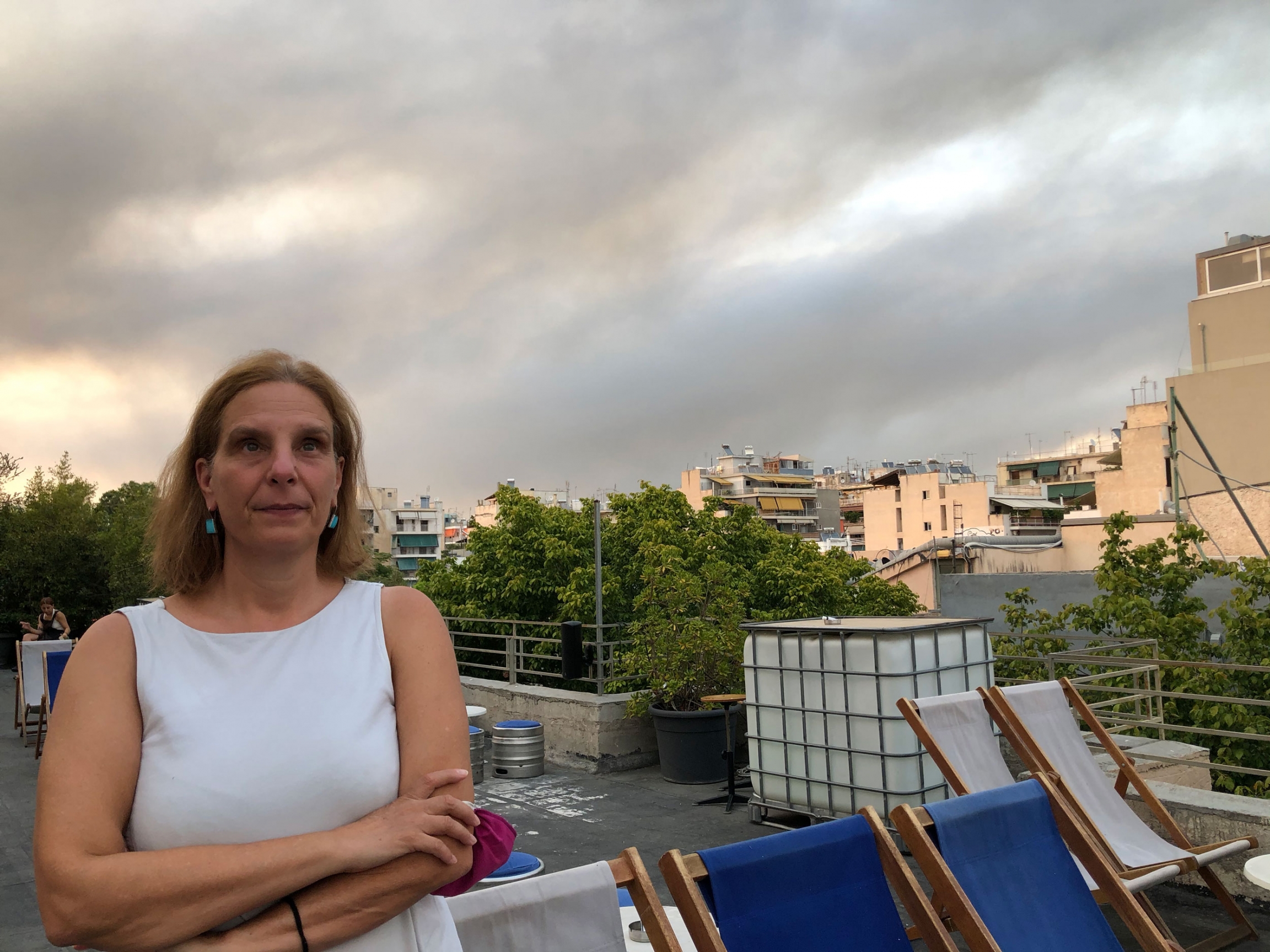 Eleni Myrivili stands on a rooftop in Athens as a smoke cloud from a fire approximately 15 miles north of the city covers the sky above, Aug. 3, 2021.

As dozens of fires rage around Greece and temperatures reach all-time record highs this week, Myrivili is stepping into her new role as Athens’ newly-appointed and first-ever chief heat officer.

Myrivili, who’s the former deputy mayor of Athens for urban nature and climate change resilience, is the first person in Europe to be granted the title and only the second in the world, as part of an initiative led by the Atlantic Council’s Adrienne Arsht-Rockefeller Foundation Resilience Center.

Miami-Dade county in Florida also appointed a chief heat officer earlier this year. Freetown, Sierra Leone is expected to appoint its own official later this year. 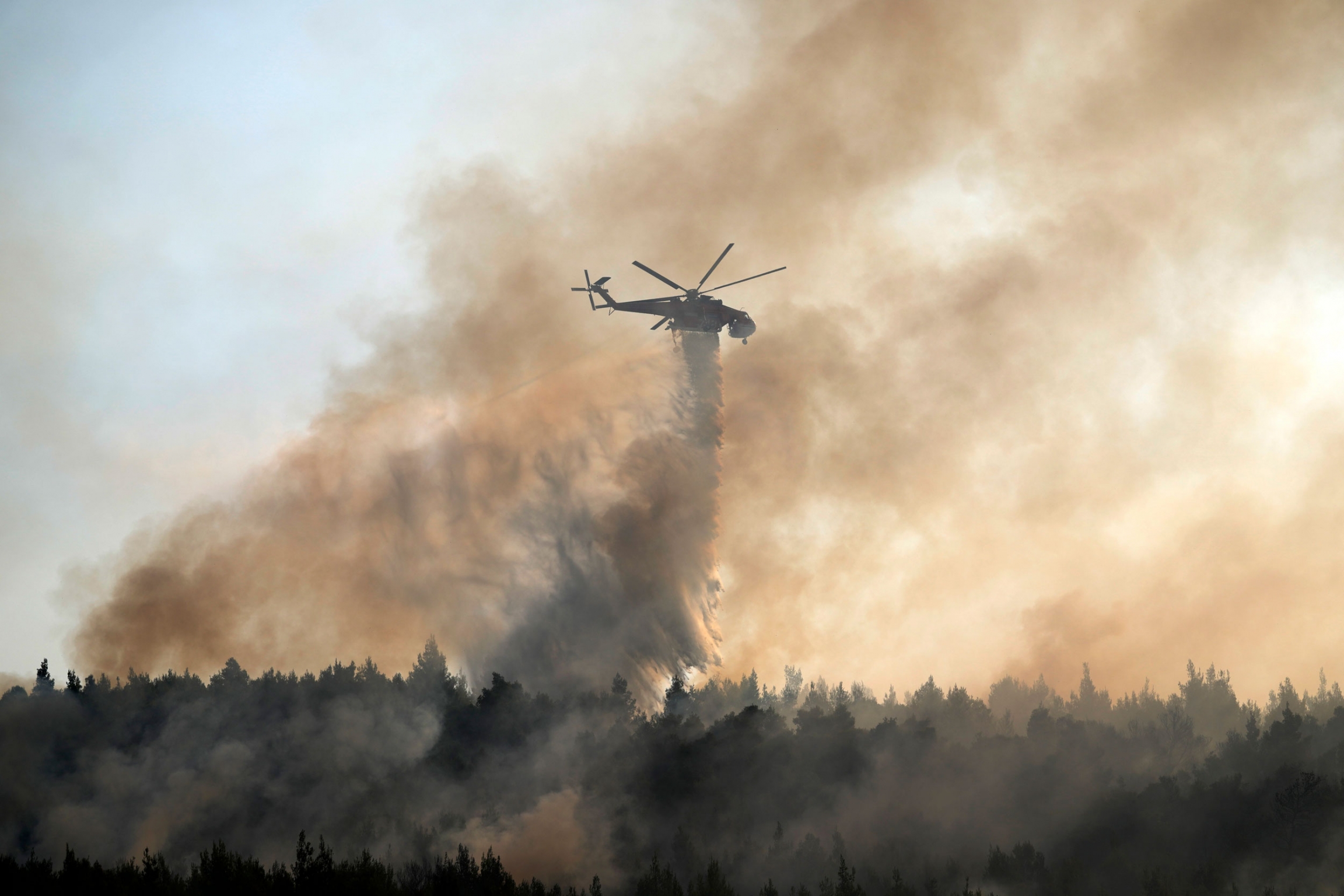 In Athens, Myrivili is tasked with finding ways to keep the city cool and its residents safe from extreme heat and heat waves, which researchers project will become longer and more common in future years due to climate change. Greece is currently in the midst of its worst heat wave in 30 years, with temperatures peaking at above a record-setting 115 degrees Fahrenheit on Monday.

Lydia Emmanouilidou: What does it mean to be a chief heat officer?
Eleni Myrivili: It means that I have to wake up every morning and worry about making the city more livable and making the vulnerable populations safer in relation to rising heat and heat waves. I think one of the main things that I have to do is to make sure that there is more nature brought into the city: green and blue and generally natural solutions. The second thing is, in the short-term, being prepared and making sure that we can protect the most vulnerable during extreme heat. And the third thing is raising awareness about the severity of heat waves and how dangerous they are. Of all the weather phenomena, this is the most deadly one. 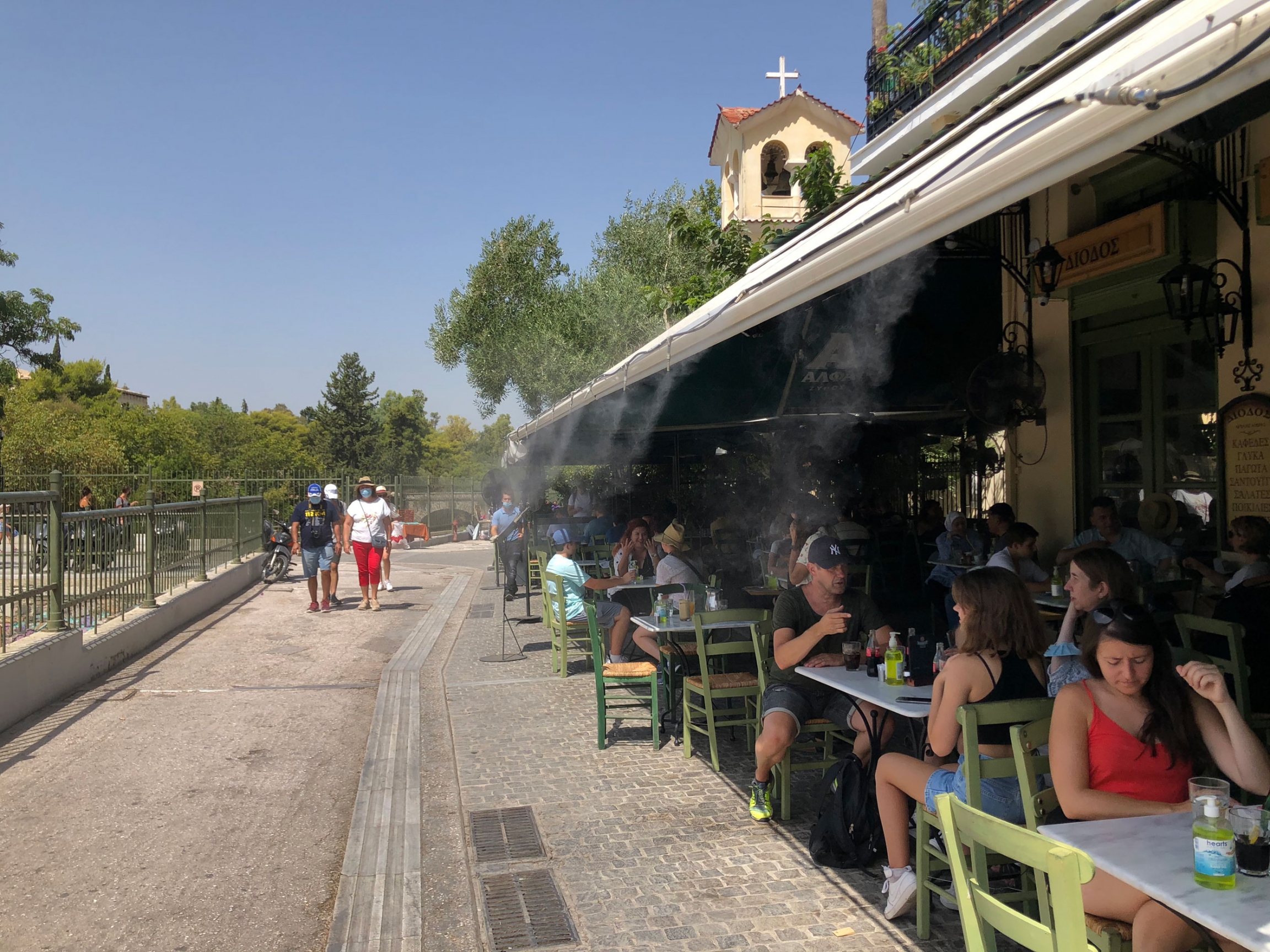 Restaurants in the Monastiraki area of Athens set up misting fans for people to cool off.

Athens is the hottest capital city in mainland Europe. What makes Athens so hot?
Athens is definitely the hottest capital because it's very densely built with not much green at all. And it has a lot of non-permeable surfaces that are dark — like asphalt and cement — and a lot of buildings that are built close to each other. So they have a high urban heat island effect, which means that they trap heat and radiate heat, even during the night, so it never really cools down. The western part of Athens is the hottest. It’s very densely built with not much green at all. And we know now — in almost every city around the world — low-income neighborhoods are usually the ones that have the smallest percentage of green. 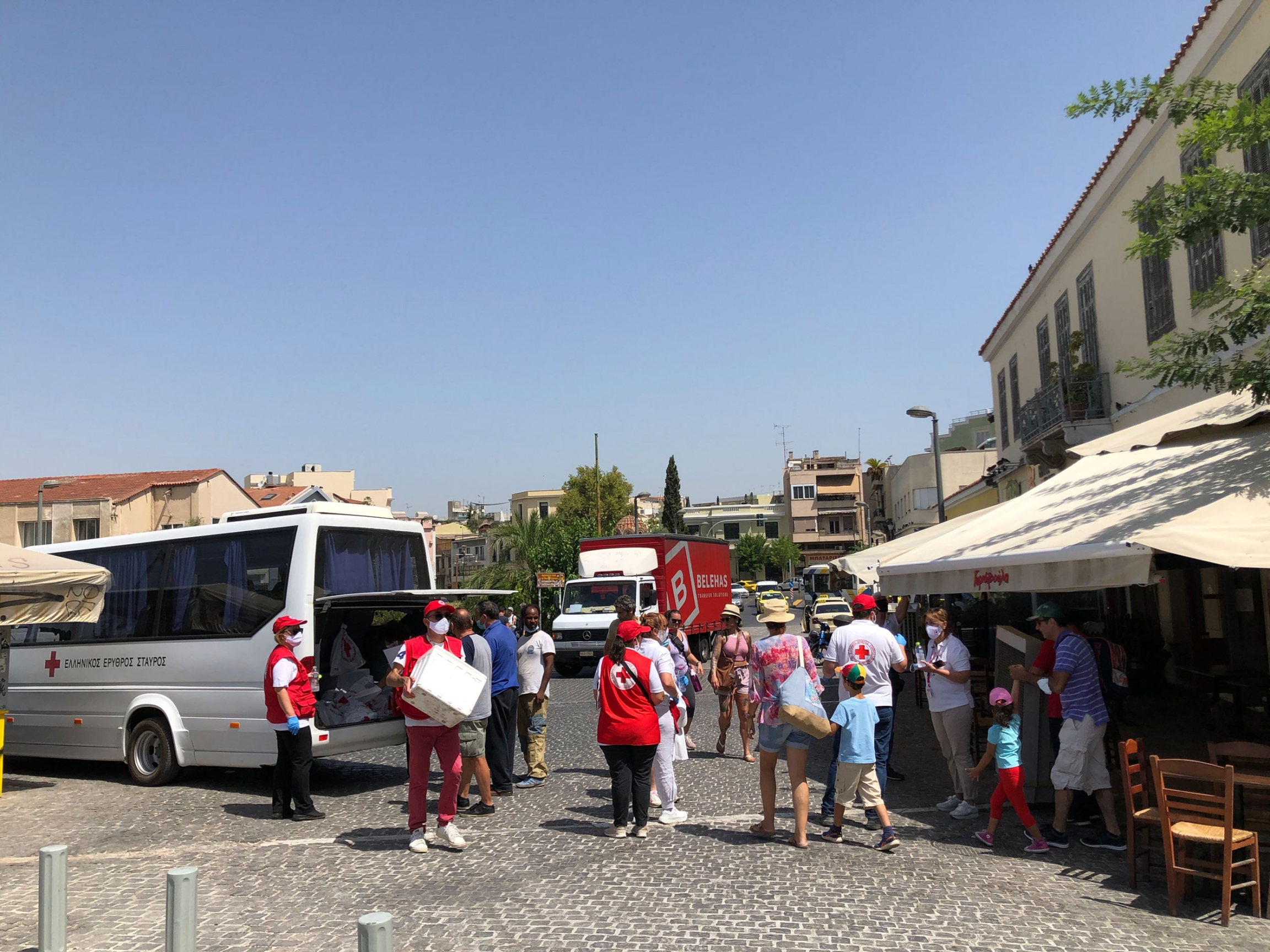 The Greek Red Cross was deployed on Tuesday to hand out water to homeless people in the area and to passersby, as temperatures reached 110 degrees Fahrenheit.

What are some of the vulnerable populations you want your initiatives to target?
The elderly, pregnant women, young kids, homeless people. Another vulnerable group is the refugees and the immigrants who are either living in large numbers together in apartments in Athens, [where], often, they don't have enough money to have air conditioning, or they live in refugee camps, in tents or in metal containers. There's a lot of energy poverty in the city and there are a lot of people who don’t have access to air conditioning. So, even though air conditioning is not a panacea, because, of course, as we know, it creates a lot of greenhouse gas emissions and creates more heat outdoors, it's something that we really need to protect people. So, when the heat waves are happening, we really need to have the people in cool places and we have to figure out how to make that possible and be really prepared for the next heat wave so that we reach more people and make sure that we keep them cool. 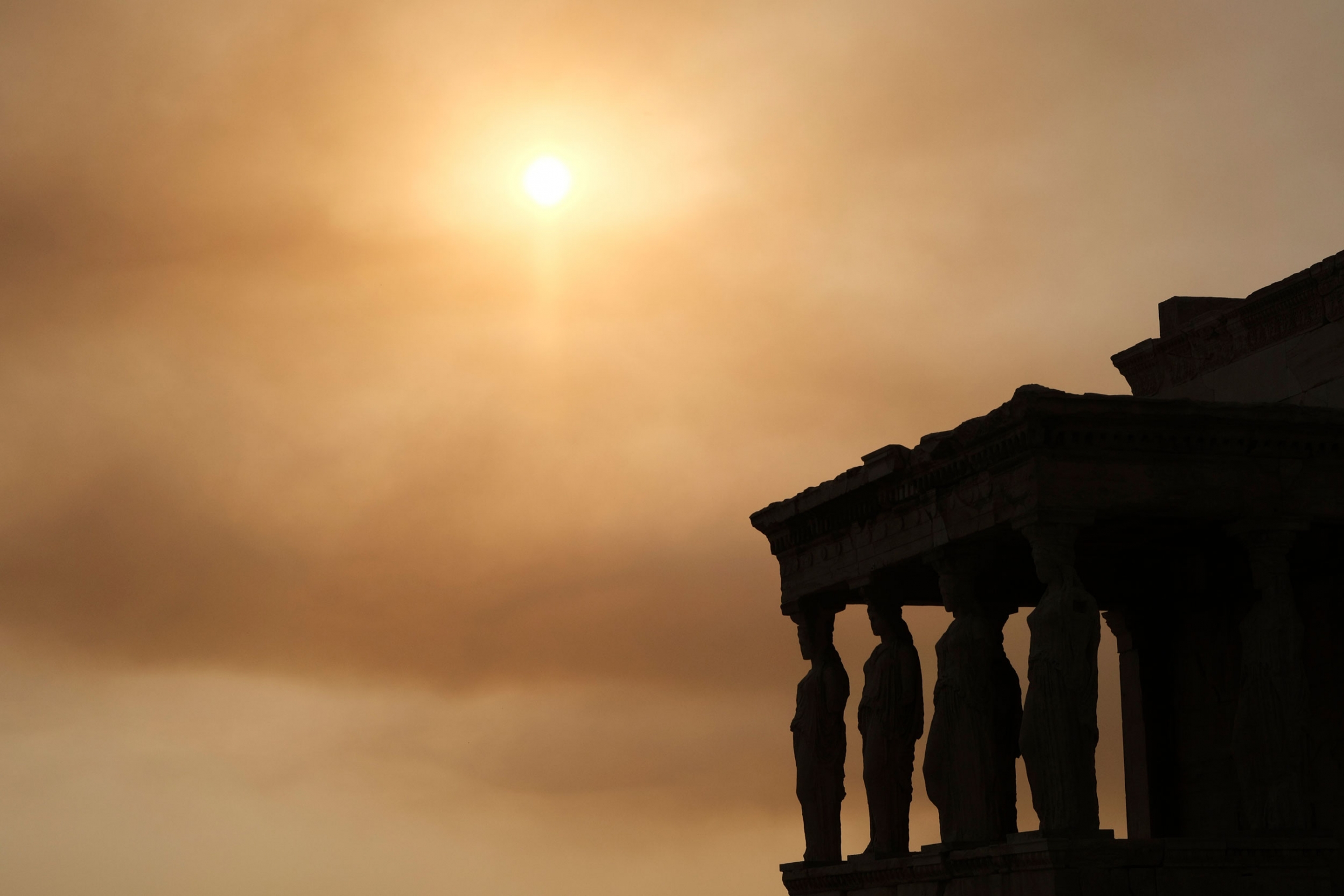 Smoke from a wildfire north of the Greek capital, spreads over Acropolis hill, in Athens, Greece, Aug. 3, 2021.

Are you tracking what other cities are doing to deal with climate change and rising temperatures?
Yes, of course. Milan is doing extraordinary work with urban gardening and urban farming, as well as creating pedestrian walks with a lot of thick green and trees and canopy. Los Angeles has put white sealer on the gray asphalt to lower temperatures. Phoenix has copied that. So, a lot of cities are trying to do things in relation to heat. Another issue has to do with blackouts and the fact that when everybody is using air conditioning and sucking a lot of energy, that could lead to blackouts, which we've seen. There could be an agreement with energy providers, as there is in Sydney. When the temperatures go high, they divert from the industrial sector to the residential sector, the energy loads. So, this is something that, again, has to be agreed [upon]. There must be provisions like that and there should be a general mobilization, which I don't see. And we have to set these things in motion. 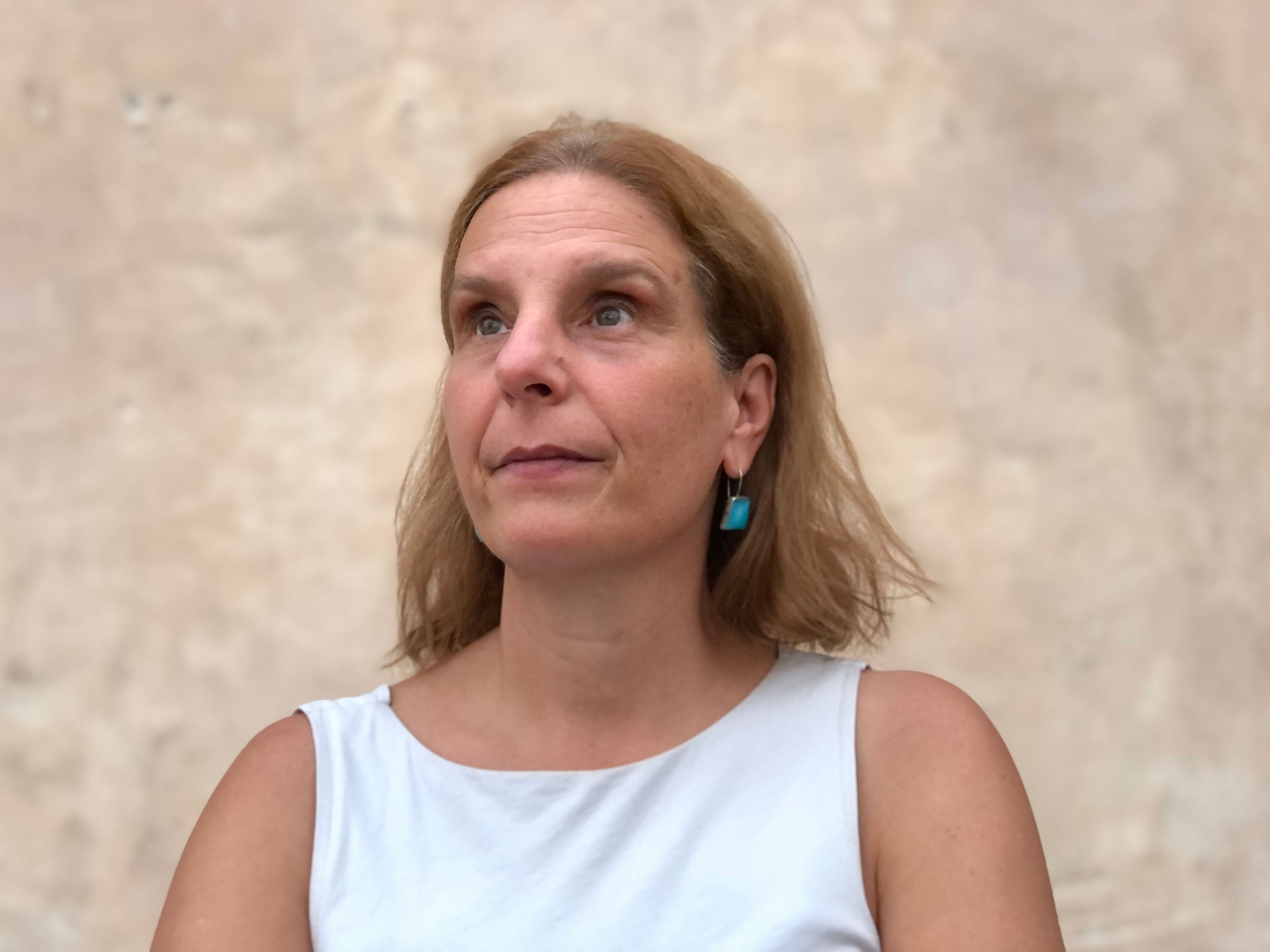 Eleni Myrivili is the first-ever chief heat officer in Athens, Greece, and in Europe

Researchers warn heat waves will become longer and more frequent. You’ve cited research that projects temperatures will rise in Greece by up to nearly 7 degrees Fahrenheit by 2050. How does that make you feel about the future of the city?
It makes me worry about my city and its livability. I'm afraid that if we don't move now, it's going to be too late. I think this is the last opportunity we have to change how we design this city and how we live in this city. And I feel a weight on my shoulders because now I have, at least partially, the responsibility to move things along and to help change this. And it's a big responsibility. It's just a matter of waking up to it and actually doing it. It's a matter of sustainability and viability of the city itself.

Questions and answers have been edited for clarity and length.