Bernadette Daw Gamayel shows a photo on her cell phone taken from her balcony on Aug. 4, 2020, a little after 6 p.m. Plumes of dark smoke rise above Beirut port in the distance.

In that moment, everything changed.

Gamayel’s whole family was together that day in their apartment facing the port. Her husband had come home early to meet with a carpenter to install their children’s new bedroom set. Gamayel also planned to put up a small inflatable pool for her two kids on the balcony.

“We wanted it to be a special day,” Gamayel said. “We were planning it to be ... the happiest day for the kids.” 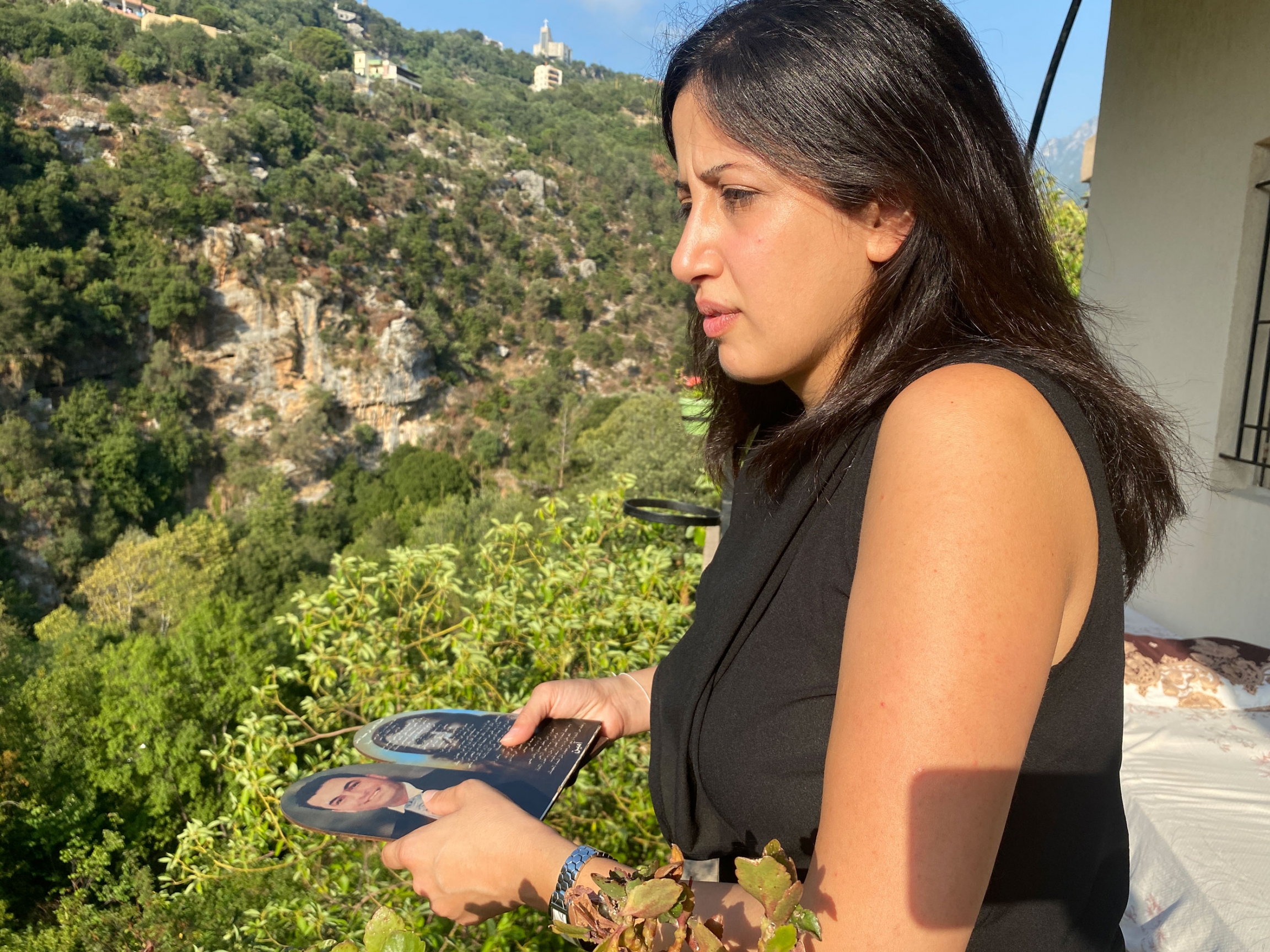 Bernadette Daw Gamayel looks out over the balcony.

Her husband went to the balcony to see the smoke. He told the children not to worry. “He told them ‘don’t be afraid,’” Gamayel said. Her husband returned inside to help the carpenter.

Seconds later, a blast ripped through the city and their apartment.

Gamayel lost almost everything — including her husband.

A year later, Gamayel and other families of the 200 victims still lack answers and are no closer to justice.

“All the government is responsible,” said Gamayel. “They all knew about the [ammonium]  nitrate. They all knew.” 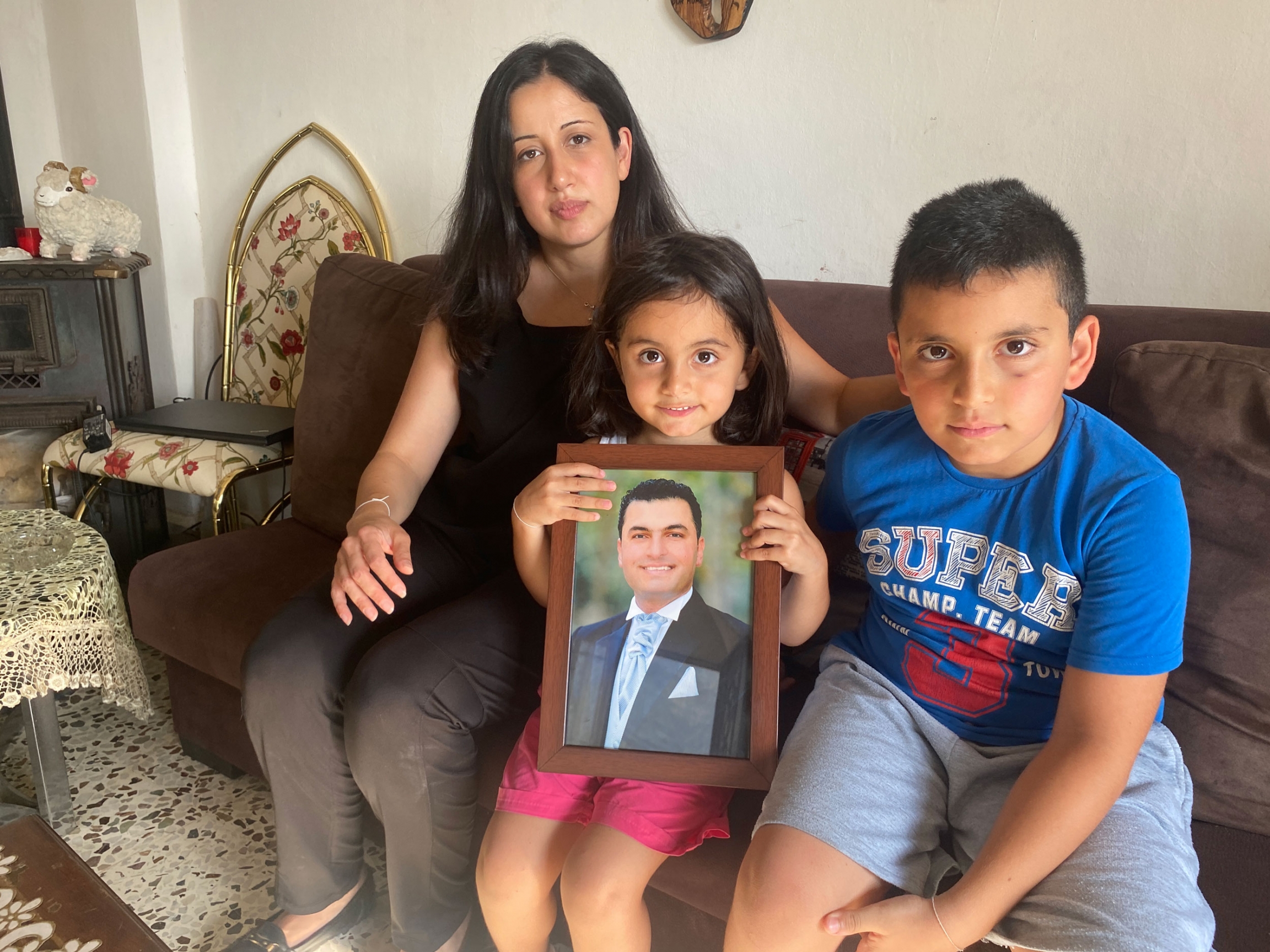 Bernadette Daw Gamayel with her two children and a photo of her husband, Jack, who died in the blast.

Many of Lebanon’s political elites — including the prime minister and president — knew that Beirut’s port stored thousands of tons of highly explosive ammonium nitrate, but did nothing about it.

Over the past year, victims’ families have been holding protests outside the homes of ministers, government buildings and judicial offices. They march holding photos of their deceased loved ones and demand justice.

Unanswered questions linger about how and why the chemicals were being stored at the civilian port, next to a densely populated residential neighborhood — and what exactly sparked the explosion.

Related: After explosion, Lebanon's doctors are leaving in droves

“It’s very clear to us that the ruling political parties in Lebanon are trying to sabotage the investigation and to derail efforts to find justice for the blast victims."

“It’s very clear to us that the ruling political parties in Lebanon are trying to sabotage the investigation and to derail efforts to find justice for the blast victims,” said Ghida Frangieh, a lawyer with Legal Agenda, a Lebanese rights organization.

Frangieh pointed out that Lebanon’s leaders have faced little accountability on all fronts, from war crimes during the 1980s, “to the widespread corruption and financial and economic collapse that we are now facing.”

Related: Lebanese take to the sea — risking their lives to reach Europe

'Everybody is needy now'

In the past year, the financial crisis has deepened.

In a church about a mile from Beirut’s port, a priest leads Sunday mass with just a few dozen worshipers in the massive hall.

The scars of the blast that destroyed this neighborhood one year ago are still visible — shattered marble plaques on the walls, cracked stone columns, and the church is still without windows.

More than 20 members of this parish died that day.

Father Elia was giving a sermon as the blast ripped through his church. In the days after, he held funeral after funeral.

“Every day for two weeks I had...three or four,” he recalled.

Many of the graves in the cemetery next to the church were also blasted open. A thick stench permeated the air as the bones of long-deceased bodies were exposed.

Father Elia had to bury the blast victims next to those open graves. Most of the graves have now been fixed, or at least closed, but tombs and headstones remain cracked. 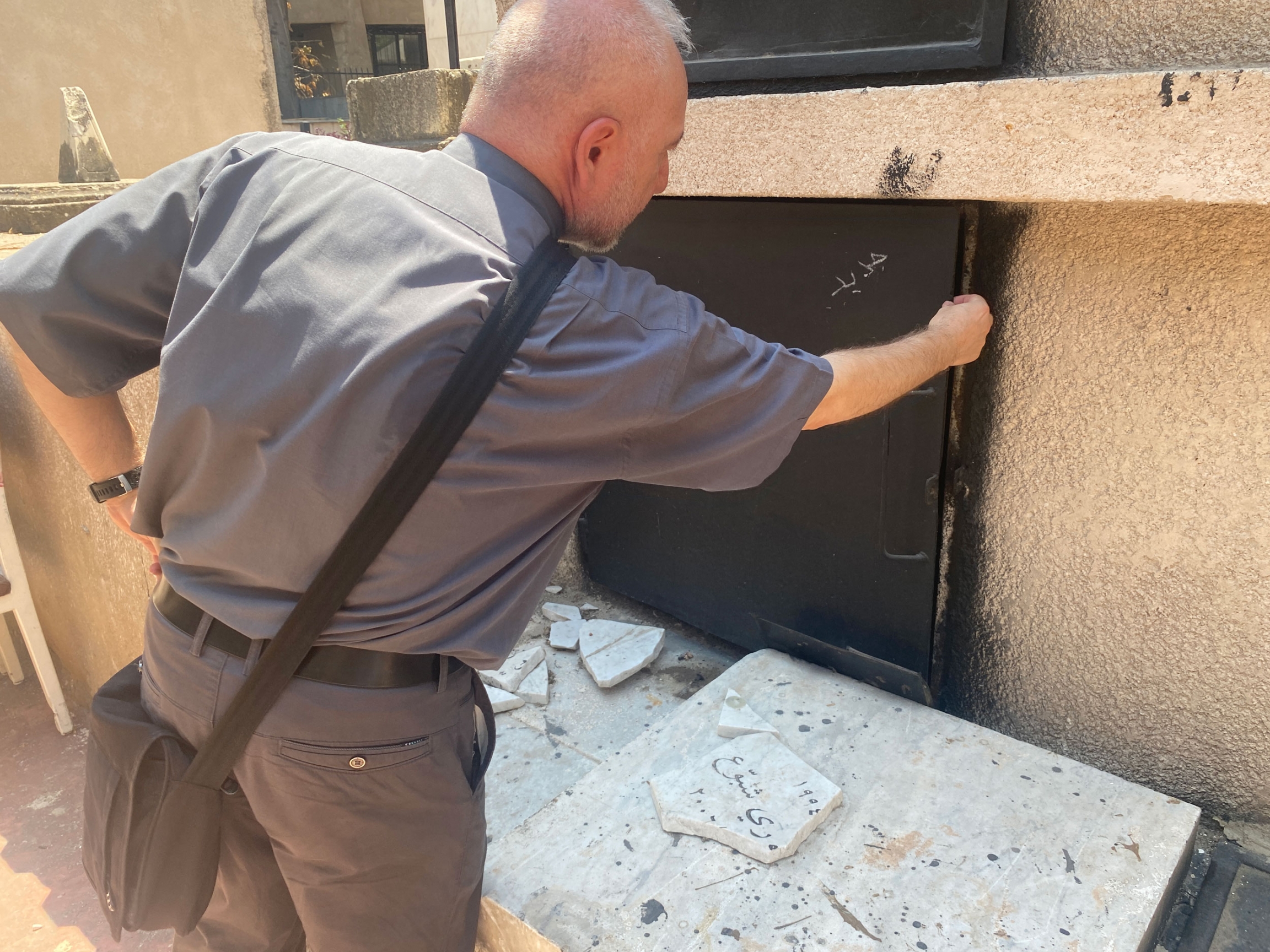 Father Elia had to bury the blast victims next to those open graves. Most of the graves have now been fixed, or at least closed, but tombs and headstones remain cracked.

As inflation skyrocketed and poverty among Father Elia’s congregation rose dramatically, he had to make tough choices. The smashed gravestones and empty windows took a back seat to feeding his congregants and assisting with medical costs.

The cost of basic foodstuffs has tripled, or even quadrupled, since the fall of 2019, but salaries have not kept up. And many people lost their jobs during the pandemic.

At a food bank in the church basement, volunteers hand out 100 meals a day. But half the Lebanese population now live below the poverty line, according to the UN.

“Everybody is needy now. ... We can’t [receive] more people and the demand is growing.”

“Everybody is needy now,” said church volunteer Raja Hadwane. “We can’t [receive] more people and the demand is growing.”

She said without the program, families would go hungry.

A block away, a dozen women gather with their children outside a free clinic. Medical costs have also risen and pharmacies are running out of basic medicine like pain killers.

Even those who can afford to fill prescriptions often can’t find the medication they need.

A few streets over, up four flights of stairs, lives Norma Irani. In the days after the blast, she refused to leave her windowless, doorless home. Most of Beirut is getting just three or four hours of government power a day and generators can’t keep up with the demand. In Beirut’s sweltering summer heat, Irani worries about food spoiling in the freezer.

The doors and windows of Irani’s apartment are back, but she said the government offered no financial aid. Instead, nongovernmental organizations assisted, along with keeping her fridge stocked.

She emphasized the international community needs to help the people of Lebanon, — and not give money to the government.

Many here don't want to see more money go into the hands of Lebanon’s ruling elite, who are accused of siphoning off and mismanaging tens of billions of dollars — part of Lebanon's $90 billion debt. 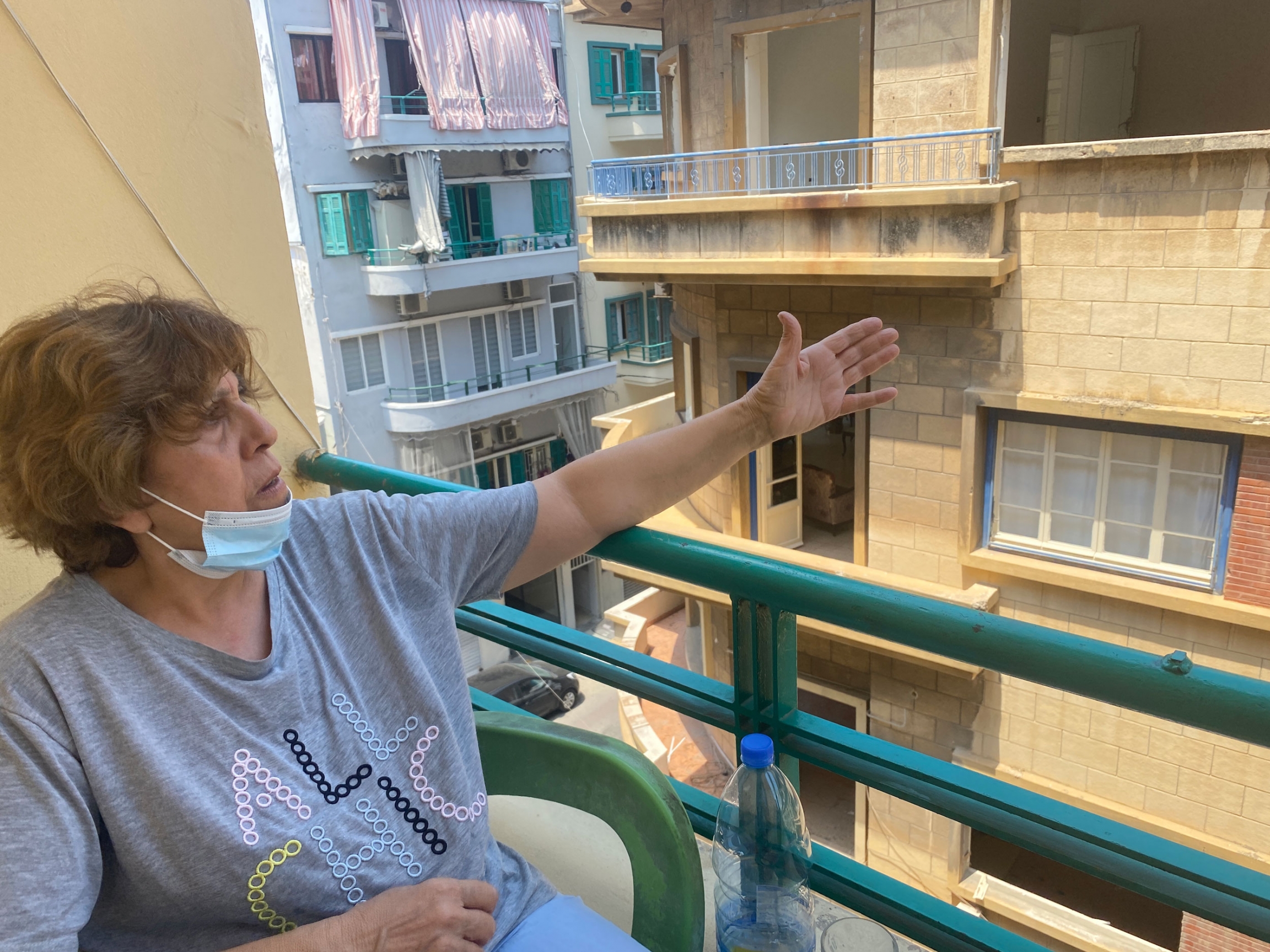 In the days after the blast, Norma Irani refused to leave her windowless, doorless home.

'There is no justice'

The aid isn’t coming anyway, because Lebanon has been without a government for almost a year.

Saad Hariri resigned as prime minister-designate last month, after eight months, unable to form a cabinet. A new government is needed to meet the conditions of the international community and unlock billions in aid and loans.

Irani said the most important thing now is justice. “All I want is justice,” she said.

But Gamayel, who lost her husband, laughs at the idea.

“Here in Lebanon? There is no justice,” she said.

But Frangieh, the lawyer, said she hopes this moment could be a turning point “toward building a more democratic and fair system where rulers are held accountable for their crimes.”

Gamayel doesn’t see how that’s possible when the government — whose alleged negligence caused the blast — is also in charge of the investigation.

Many have called on the United Nations Human Rights Council to intervene and initiate an international investigation.

A year ago, as families like Gamayel's watched the fire and smoke, so did Lebanon’s leaders. The fire burned for 40 minutes. Many leaders knew that thousands of tons of highly explosive chemicals were at the port. But nobody warned the families in the vicinity.

“My husband’s last sentence was: ‘Don’t be afraid, my kids. There is rice and wheat,’” Gamayel said. “We thought we were living near a storage of rice and wheat — not nitrate.”

Listen to Part II of this story here: A quest for justice one year after Beirut port explosion