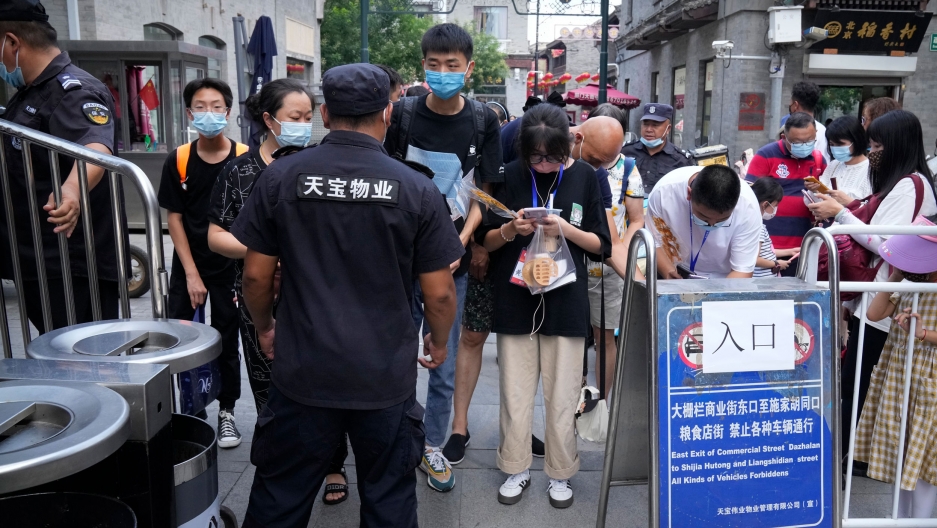 People scan health check codes with their smartphones to show to a security guard at a tourist shopping street in Beijing, Aug. 3, 2021. Chinese authorities announced Tuesday mass coronavirus testing in Wuhan as an unusually wide series of COVID-19 outbreaks reached the city.

Wuhan
China has announced mass coronavirus testing in Wuhan, the city of 11 million people where COVID-19 was first detected in 2019, after an increase in reported cases of the delta variant. The country has suspended flights and trains, and canceled professional sports. More than 1.6 billion vaccine doses developed by Chinese companies Sinovac and Sinopharm, have been administered across the country. Government-affiliated scientists say that although they offer some protection, they’re less effective against the new strains of COVID-19. Meanwhile, Germany says it plans to offer booster shots to certain groups. And while there is no scientific consensus on the need for a booster, Israel, Russia, Hungary and France are already offering them to specific populations, while other European countries plan to follow suit.

Belarus
The leader of a group helping those who’ve fled persecution in Belarus, Vitaly Shishov, has been hanged in a park in Kyiv, Ukraine. Police are investigating the death as a murder made to look like suicide. Shishov led the Belarusian House in Ukraine. International attention turned to Belarus earlier this year after opposition journalist Roman Protasevich’s flight was diverted to Belarus, and he was detained. Meanwhile, Belarusian sprinter Krystina Timanovskaya, who’s been competing in the Summer Olympic Games in Tokyo, has been granted a humanitarian visa by Poland, after refusing her team's order to fly back to Belarus for fear of her own safety.

Afghanistan
The Taliban have captured nine out of 10 districts of Afghanistan’s southern Helmand province and have taken over a TV station in Lashkar Gah, the regional capital. Local journalists say there’s nothing currently being broadcast over the station. The move comes as US airstrikes have targeted Taliban positions over the past 72 hours around the city, as well as in Herat and Kandahar. The US and UK have accused the Taliban of “massacring civilians” in Kandahar near the Pakistan border. And former US commander for Afghanistan, Gen. David Petraeus, has said the imminent withdrawal of US troops will lead to a “bloody, brutal civil war.” Afghan President Ashraf Ghani has blamed the worsening security situation on the US’ “sudden” decision to leave.

The Olympic trampoline tradition: Remembering the man who taught the world to bounce 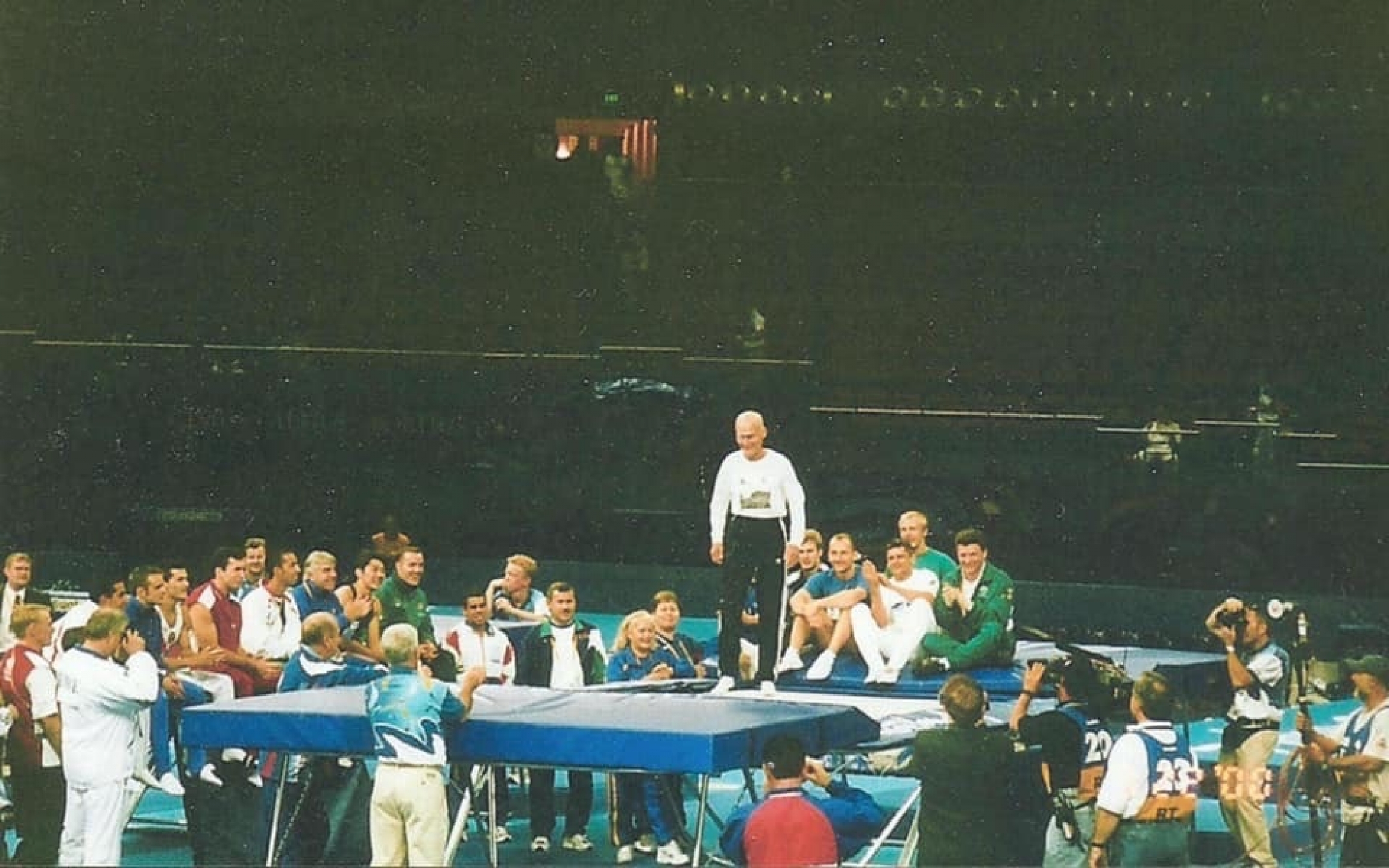 George Nissen appears on a trampoline at the 2000 Olympics.

George Nissen, an acrobat and tumbler from Iowa, invented what's known today as the modern trampoline. His daughter, Dian Nissen, a trampoline coach, said her father's joy of jumping stems from his past as a gymnast, a diver and an acrobat.

"[H]e became a national champion — he saw it first and foremost as a device to help him get better at doing those things and also as a way to perform,” she said.

Host Marco Werman has a little party — Cuban-style 🇨🇺 — to start your Tuesday. In Cuba’s Guantánamo region, changüí means party. The songs on a new box set called "Changüí: The Sound of Guantánamo" were recorded on location in Cuba's Guantánamo region by independent producer and music journalist Gianluca Tramontana. 🎧 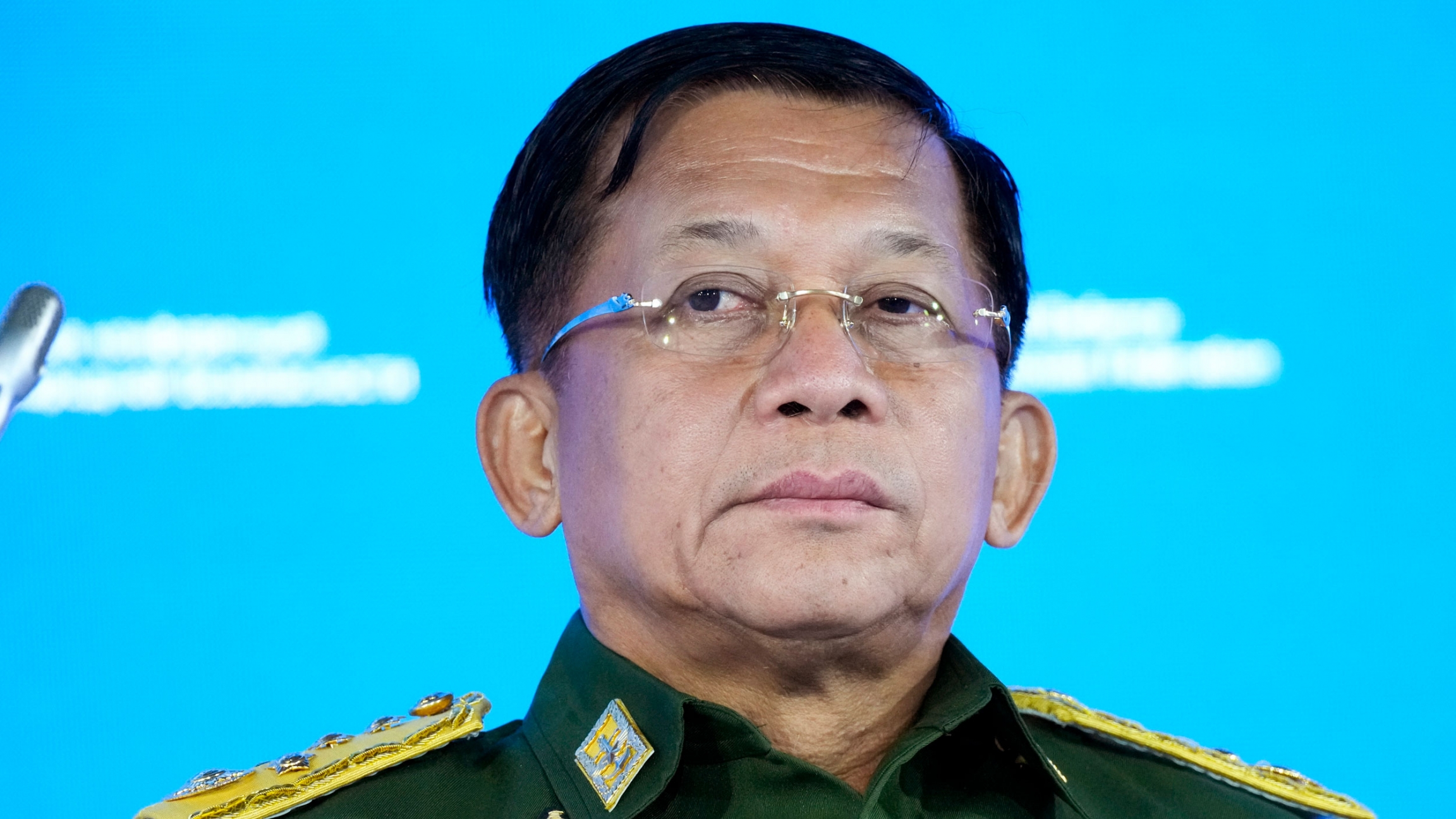 Six months after a military coup in Myanmar, the generals who seized power have announced the formation of a new government, promising “free and fair” elections in at least two years. But almost no one seems to believe them. Also, winemakers have been adjusting to warming temperatures for years, picking grapes earlier and earlier each season. But this year, freak frosts and searing high temperatures in Europe have had catastrophic effects on wine grapes. And in Israel today, the Supreme Court ruled that Palestinian residents in the contested Sheikh Jarrah neighborhood of East Jerusalem will receive protected status and will not face future evictions.