Since his childhood days in Iowa, George Nissen liked to jump.

He and his brother used to do tumbling and acrobatics together. A trip to the circus also inspired him — he liked how the flying acrobats would bounce off the safety net.

In college, he began trying in earnest to create what later became known as the modern trampoline.

“Because [George Nissen] was really a gymnast and a diver and an acrobat — he became a national champion — he saw [the trampoline] first and foremost as a device to help him get better at doing those things and also as a way to perform."

“Because he was really a gymnast and a diver and an acrobat — he became a national champion — he saw it first and foremost as a device to help him get better at doing those things and also as a way to perform,” she said. 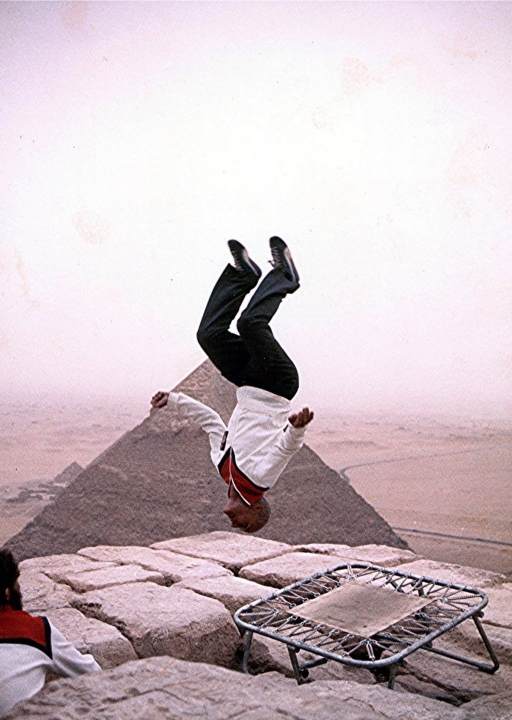 George Nissen, inventor of the trampoline, seen in his happy place, bouncing on a trampoline.

It took him and his coach Larry Griswold years of tinkering and testing to get the trampoline to actually work. At first, George Nissen used spare parts, scraps from the junkyard. He also took apart his own bed frame — to his father’s dismay.

“I think one of the first ones, they fixed it up and got it ready and they just fell through,” Dian Nissen said.

There were a lot of fails. Luckily, no one got hurt. Her dad would say, “We know not to do that — because just believe me we’ve tried it.”

Eventually, he created a prototype that he took to a summer camp and let the campers loose on it.

“He couldn’t get the kids off when it was time for them to quit and go to the pool and he thought, ‘I really am on to something,’” Dian Nissen said.

Jumping on the trampoline — or rebounding — had instant appeal. Film reels from 1964 documented the popularization of George Nissen’s invention. The military began using trampolines to train pilots, and NASA used it to prepare astronauts to go into space — to help them learn to orient themselves in flight.

But George Nissen wanted the trampoline to be a competitive sport.

The first Trampoline World Championships were held in 1964 in London. And well before TikTok and Instagram, George Nissen knew how to make trampolines go viral.

“They set up a trampoline in front of Big Ben, and got a nice photoshoot with that,” Dian Nissen said. “We went to Egypt, he was putting a trampoline on a pyramid.”

That’s not all. The one people are most likely to remember was the photo of George Nissen bouncing with a kangaroo. 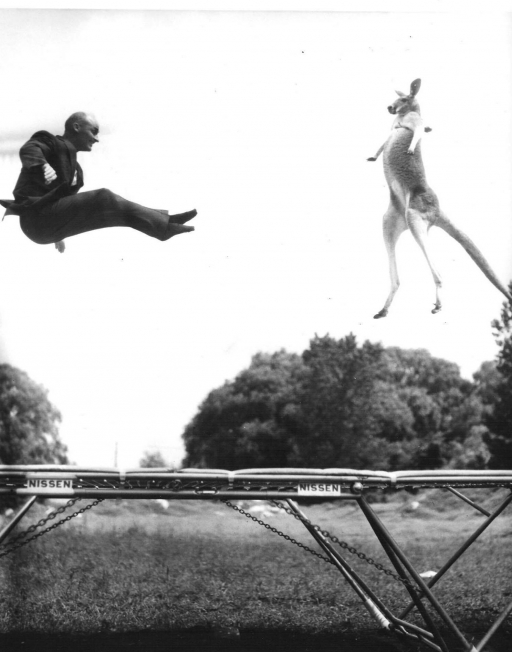 One of George Nissen’s publicity stunts — jumping on a trampoline with a kangaroo.

“We have to say no, it was not photoshopped, there was a real kangaroo involved and no one was hurt,” she said.

He even invented a whole other sports event involving the trampoline called spaceball, which incorporated basketball, volleyball and jumping. It never caught on as well as trampoline routines, though.

When George Nissen set his sights on the Olympic Games, he knew he’d have to popularize the sport in at least 40 countries.

But that didn’t deter him.

He and a group of athletes set out to show off what trampolinists could do. Dian Nissen, a rising young champion herself, went along for the ride.

“We went to South America, we went to Brazil, we went to Trinidad. There was South Africa, Australia, we went to Russia, the Soviet Union at the time,” she said. “The idea was to get it in as many countries as possible.”

George Nissen pinned his hopes on getting trampoline added as an event at the 1980 Olympics in Moscow, and for a time, it looked like there was a chance.

“He was really tirelessly trying for that with 1980. It fell through and he was very upset,” Dian Nissen said. “Someone had commented, ‘It’ll be the year 2000 before it happens.’”

Turns out, they were right. Nearly 20 years later, 86-year-old George Nissen and his daughter traveled to Sydney to watch the sport he invented join the 2000 Olympic Games. Canadian Olympic coach Dave Ross was there with his athletes.

“We marched into the stadium, it was full,” he remembered. “And that was mind-boggling. We were jet-lagged but we were like, what! We were part of something that was huge, it was like  —  you had no idea.”

Dian Nissen said her dad was a trampoline bouncer until his death at age 96. And his love for entertaining endured. Wherever he went, he liked to put on a show.

Ross said George Nissen’s backflip was always a highlight at the Nissen Cup — held every two years in Switzerland.

Dian Nissen passes on the lessons she learned from her dad to her students.

“The better you get at it, the more exhilarating it is. ... You hone the skills the way you do somersaults and the movements and the twisting and when you’re a top competitor, it’s a rush, but it is a controlled rush because you know what you’re doing —  there’s a focus, a mental acuity.”

“The better you get at it, the more exhilarating it is,” she said. “You hone the skills the way you do somersaults and the movements and the twisting and when you’re a top competitor, it’s a rush, but it is a controlled rush because you know what you’re doing — there’s a focus, a mental acuity.”

With the winners of the trampoline events heading home with their medals in this year's Summer Olympics in Tokyo, Dian Nissen said her father would be thrilled.

His dream came true. He taught the world to bounce.