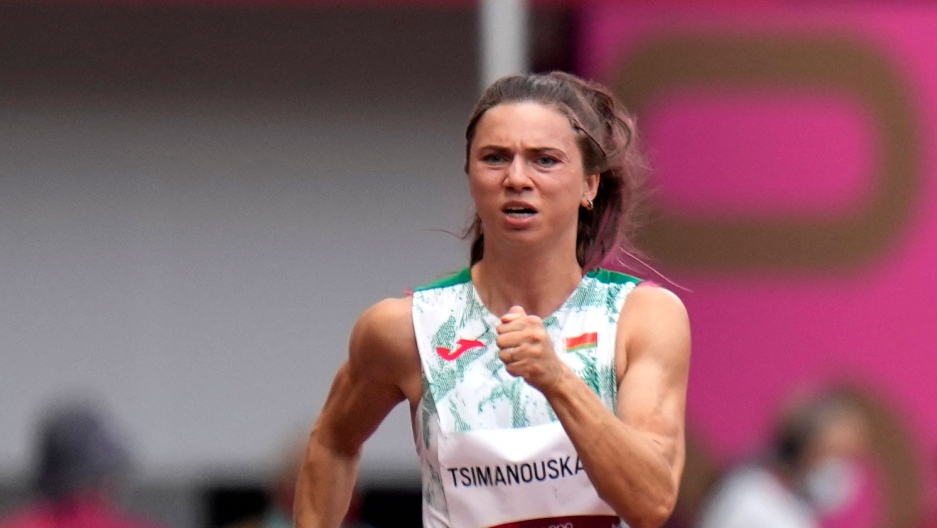 Krystsina Tsimanouskaya, of Belarus, runs in the women's 100-meter run at the 2020 Summer Olympics, July 30, 2021. Tsimanouskaya alleged her Olympic team tried to remove her from Japan in a dispute that led to a standoff on Sunrday at Tokyo’s main airport.

Athlete Krystsina Tsimanouskaya received a humanitarian visa from the Polish embassy in Tokyo on Monday, according to a Polish Foreign Ministry official after the Belarusian Olympic sprinter alleged that her team's officials tried to force her to fly home, where she feared she wouldn't be safe.

The Belarusian Sport Solidarity Foundation, an activist group that is helping the runner, told The Associated Press that the group bought her a plane ticket to Warsaw for the coming days.

The current standoff apparently began after Tsimanouskaya criticized how officials were managing her team — setting off a massive backlash in state-run media back home, where authorities relentlessly crack down on government critics. Tsimanouskaya said on her Instagram account that she was put in the 4x400 relay even though she has never raced in the event.

The runner was then apparently hustled to the airport but refused to board a flight for Istanbul and instead approached police for help. In a filmed message distributed on social media, she also asked the International Olympic Committee for assistance.

"I was put under pressure, and they are trying to forcibly take me out of the country without my consent," the 24-year-old said in the message.

The rapid-fire series of events brought international political intrigue to an Olympics that have been more focused on operational dramas, like maintaining safety during a pandemic and navigating widespread Japanese opposition to holding the event at all.

Belarus' authoritarian government has relentlessly targeted anyone even mildly expressing dissent since a presidential election a year ago triggered a wave of unprecedented mass protests. And it has also gone to extremes to stop its critics, including a recent plane diversion in order to arrest a dissident journalist that European officials called an act of air piracy.

In this context, Tsimanouskaya feared for her safety once she saw the campaign against her in state media, according to the sports foundation.

"The campaign was quite serious and that was a clear signal that her life would be in danger in Belarus," Alexander Opeikin, a spokesman for the foundation, told the AP in an interview.

State media have continued to come down hard on Tsimanouskaya. Presenters on state TV channel Belarus 1 called her decision to seek asylum "a cheap stunt" and "a disgusting act," and described her performance at the Olympics as a "failure."

Tsimanouskaya competed for Belarus on the first day of track events Friday at the National Stadium in Tokyo. She placed fourth in her first-round heat in the 100 meters, timing 11.47 seconds, and did not advance.

She was due to compete again in the Olympic 200-meter heats on Monday, but she said her team barred her from participating in a complaint filed with the Court of Arbitration for Sport. She asked the court to overturn that decision, but the body declined to intervene.

Tsimanouskaya's next steps were not clear. Szymon Szynkowski vel Sek, a Polish deputy foreign minister, said the runner asked for the humanitarian visa for now and can still seek refugee status once in Poland. Vadim Krivosheyev, of the activist sports foundation, said she planned to seek asylum.

Athletes seeking asylum at global sporting events is nothing new. It was especially frequent during the Cold War but has also happened occasionally in the decades since. As many as 117 athletes defected at the Munich Olympics in 1972, according to reports at the time. At least four Romanians and a Soviet associated with the Olympics defected at the Montreal Games in 1976. And Cuban athletes have frequently done so.

Underscoring the seriousness of the allegations, several groups and countries say they are helping the runner. Poland and the Czech Republic offered assistance, and Japan's Foreign Ministry said it was working with the International Olympic Committee and the Tokyo Olympics organizers.

The IOC, which has been in dispute with the Belarus National Olympic Committee ahead of the Tokyo Games, said it had intervened.

"The IOC … is looking into the situation and has asked the NOC for clarification," it said in a statement.

A spokeswoman for the Belarus Olympic team did not respond to a request for comment.

Many critics of Belarus' government have fled to Poland. A top Belarusian dissident in the country, Pavel Latushka, said Tsimanouskaya and those supporting her had sought assistance from various European governments, but Poland was the quickest to respond.

Marcin Przydacz, one of the country's deputy foreign ministers, said on Twitter that in addition to granting the humanitarian visa, Poland would also help the runner to continue her sports career. "Poland always stands for Solidarity," he said.

Several hours after she entered the Polish embassy, Tsimanouskaya was still believed to be inside.

The Belarus National Olympic Committee has been led for more than 25 years by authoritarian President Alexander Lukashenko and his son, Viktor.

Both Lukashenkos are banned from the Tokyo Olympics by the IOC, which investigated complaints from athletes that they faced reprisals and intimidation during the crackdown following the wave of anti-government protests over the last year.

"Lukashenko perceives all criticism as part of a plot by Western countries," said Valery Karbalevich, an independent Belarusian political analyst. "Tsimanouskaya's protest is viewed as part of a broader movement of hundreds of Belarusian athletes who stood against the beatings of peaceful demonstrators and for a year have been taking part in street rallies."

The standoff over Tsimanouskaya comes just months after the dramatic diversion of a passenger plane flying between two EU countries. Belarusian authorities ordered the plane to land in Minsk — and pulled journalist and activist Raman Pratasevich and his Russian girlfriend off the flight.

The elder Lukashenko maintained that there was a bomb threat against the plane and that's why a fighter jet was scrambled to force it to land, but the move was roundly criticized by Western leaders.

Pratasevich, who ran a channel on a messaging app used to organize demonstrations against Lukashenko's rule, left his homeland in 2019. He has been charged with fomenting mass unrest and is under house arrest while he awaits trial.

Associated Press journalists Daria Litvinova and Daniel Kozin in Moscow and Yuras Karmanau in Kyiv, Ukraine, contributed to this report.