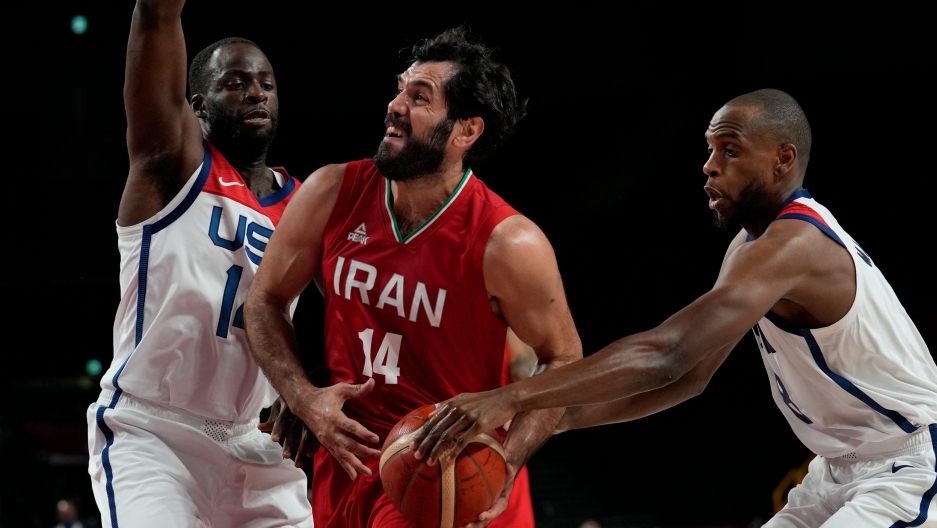 For two hours, it was basketball diplomacy.

It's still somewhat rare for the US and Iran — nations that haven't had diplomatic relations for more than four decades and often are at vastly different ends of the political spectrum — to get together in anything, from sporting events to nuclear talks. It happened Wednesday at the Tokyo Olympics, the US easily prevailing 120-66 in a result that might soon be forgotten but a scene that may be long remembered.

"In general, I think people in different countries get along a whole lot better than their governments do," US coach Gregg Popovich said.

That seemed to be the case Wednesday, anyway.

Popovich shook hands with Iran coach Mehran Shahintab and members of his staff both before and after the game, complimenting the way the overmatched Iranians — a group with one former NBA player against a team of 12 current NBA players — performed in his postgame remarks both on and off the floor. To him, there was nothing unusual about exchanging pleasantries.

"People are different," Shahintab said, "and separate from politics."

It's been 41 years since the US and Iran severed diplomatic relations, a move that came a few months following the Iranian takeover of the American Embassy in Tehran on Nov. 4, 1979 and sparking what became a 444-day hostage crisis. There have been crippling economic sanctions levied on Tehran by Washington and a unilateral withdrawal from the world powers nuclear deal by former President Donald Trump, US flags often being burned at rallies and protests in the streets of Tehran, and accusations in recent weeks that Iran has delayed a proposed prisoner swap to force a quick resumption of indirect nuclear talks.

"We continue to believe — and have never held back from noting — that Iran is a bad actor in the region," White House Press Secretary Jen Psaki said last month. "And they have taken part in and supported and participated in problematic, extremely problematic behavior, in our view."

But sports are often a unifying force.

Perhaps the most famous example is what is still known as "pingpong diplomacy" — when table tennis players from the US and China played in the early 1970s and essentially began a major mending of relations between the two countries.

The Olympics also tend to create moments that likely wouldn't happen in the political world. Earlier this week, Shahintab shook hands with the coach of the Czech Republic after a game; that coach, Ronen Ginzburg, is from Israel — a nation that Iran does not recognize.

If political leaders from Iran and Israel shook hands, it would be front-page news. At the Olympics, it happened without fanfare.

Even amid decades of political rhetoric, the US and Iran have shown that athletes from those nations can coexist.

Wrestlers from the US went to Iran in 1998, where they were surrounded in the streets — in a good way. Wrestling is extremely popular in Iran, so when that group of US wrestlers ventured out to shop they found themselves shaking hands and taking pictures. There have been other wrestling events involving the nations since, all with similar receptions from both sides.

"Once you get to the politicians, that sort of thing, it becomes much more complicated: self-interests, ideologies and personal agendas," Popovich said. "But the people generally get along, appreciate each other, no matter what country you're talking about. I really believe that. I've always believed that."

At least one expert on international sport relations was not surprised that the US-Iran basketball game occurred without incident.

"They are being good sports in a highly visible and lucrative sport," said Dr. Heather Dichter, an associate professor of sport management and sport history at De Montfort University in England. "Doing otherwise would likely have been more damaging reputationally in the second most popular sport globally."

Some of the players on the US team knew Haddadi, the Iranian center with past NBA experience. Many of the players hadn't met those on the other team before, and the Americans didn't spend any time before the game discussing how the meeting between the nations might be perceived in diplomatic circles.

"I guess that's political, right? We stay away from that," US forward Kevin Durant said, adding "for the most part we kept it at basketball."

Popovich lauded the system that the Iranian coaches had installed, complimented the way the opponents ran their offense, and wished Shahintab well after the game.

He couldn't have imagined the meeting going any differently.

"The Olympics, this is a venue and time where sports transcends all that petty crap between governments," Popovich said. "There's no surprise that the coaches enjoyed meeting each other and talking to each other, that the players showed sportsmanship. We just wish this happened in real life."