Not all heroes wear capes. In Latin America, some real-life icons wear Mexican wrestling masks or arm themselves with shields and herbicide to lead demonstrations and strong-arm government officials into protecting the people.

These superheroes aren’t traumatized billionaires like Ironman or aliens with modest alter egos like Superman. They are regular people from Mexico, Argentina and beyond who, with outlandish costumes — and, sometimes, social media accounts — galvanize their communities to defend themselves against everything from police brutality to corporate greed.

Mass demonstrations in the United States have yet to spawn this kind of real-life superhero. But as my research on Latin American cultural studies and history demonstrates, common citizens there regularly don outlandish outfits and adopt comic book-inspired personas to promote social change.

Perhaps the best-known character of this sort is Mexico’s Superbarrio, who in the late 1980s advocated for housing reform in Mexico City. The character was created by Marco Rascón, a social activist and occasional political candidate, who never actually wore the mask but who coordinated the character’s public appearances. 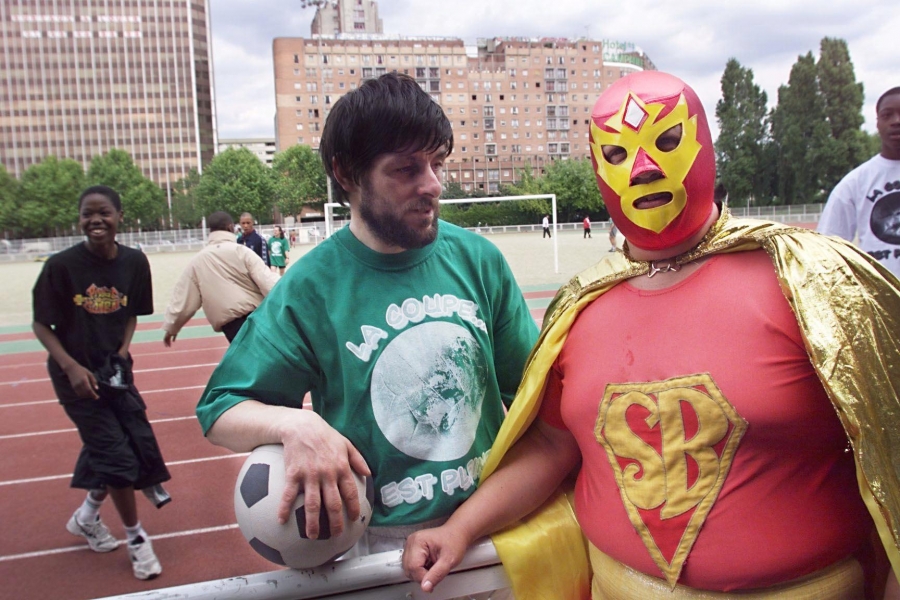 Superbarrio, seen here in 1998, was an early real-life Mexican superhero who became popular across Latin America.

In addition to organizing rallies for affordable housing and tenant protection programs, Superbarrio routinely met with politicians and housing officials as an advocate for the needs of the city’s poor, many of whom were rural migrants who came to the capital during Mexico’s mid-20th-century boom years.

In the 1990s, Superbarrio supported the Zapatistas — an Indigenous protest movement based in the southern state of Chiapas — in their grassroots challenge of the Mexican government and global capitalism.

The costume Rascón helped design for Superbarrio combined some elements of Mexican masked wrestlers like El Santo — a justice-seeking “luchador” who became a folk hero and movie character — with others recalling El Chapulín Colorado, perhaps the Spanish-speaking world’s best-known superhero. Superbarrio combined these influences with the stylized “S” chest emblem of Superman.

More citizen-superheroes have since emerged in other Latin American countries.

One is Menganno, a middle-aged Argentine crime fighter who patrols the streets of the city of Lanús on a motorbike, dressed in a full costume with mask and shield. Menganno alerts authorities and city residents whenever he comes upon petty crime, from robberies to drug deals. He also helps aid agencies in identifying people who need food or shelter.

A 2018 Menganno movie has languished in post-production due to the COVID-19 crisis, but Netflix Latin America may be picking up his story.

Like Menganno, the Honduran masked figure Súper H – born Elmer Ramos – informs his neighbors about such issues as homelessness, gang violence and corruption. He has plenty of problems to identify: Súper H works in San Pedro Sula — once infamously known as the murder capital of the world.

Active on social media and in the streets since 2016, Super H wears a Mexican-style luchador mask and the jersey of the Honduran national soccer team.

Increasing pesticide use is one of his targets. Another is Honduras’ semi-authoritarian president, Juan Orlando Hernández. Several Hernández administration officials have been convicted in US courts for drug trafficking; in their trials Hernández himself was accused of participating in those operations.

Back in South America, Chile has seen several iconic figures arise from recent national protests there against a public transit fare hike and a starkly unequal economy.

Some of them are accidental heroes, like Pareman or “Stopman” — a protester who was captured by journalists holding a stop sign while being hosed down by the police in October 2019.

Other notable homegrown Chilean protest heroes include the Stupid and Sensual Spiderman, a street performer in a Spiderman costume who twerks in front of police while chanting protest slogans, and a climate activist dressed as Mexico’s Chapulín Colorado but armed with a gas mask and a sprayer of Round-Up herbicide.

Chile’s modern-day protest heroes follow in the footsteps of Negro Matapacos, a street dog wearing a red bandanna who electrified protesters almost a decade ago. Though he died in 2017, Negro Matapacos is still depicted as a sort of super sidekick in Chilean graffiti and print.

Dressed in black gym clothes, ski goggles and a gas mask, Capitán Colombia is a visible figure on the front lines of his country’s ongoing protests against political corruption, economic difficulties and health care privatization.

Capitán Colombia, who carries a tri-colored shield in the colors of the Colombian flag, adorned with a drawn heart, is a comic book-like muscular superhero. His toned arms and expansive chest are an exception to generally rounded physiques of Latin America’s other real-life icons. 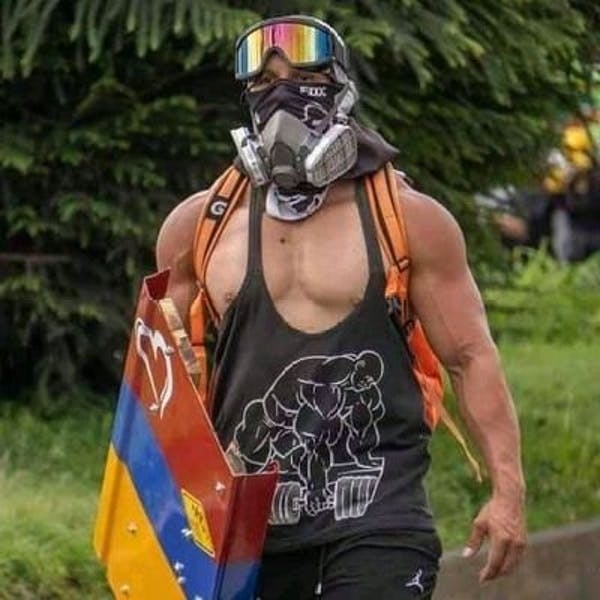 Capitán Colombia has a comic book hero’s physique and an activist’s social critique.

Like his Latin American peers, though, Capitán Colombia has no actual superpower. Still, his participation in marches draws local and international attention to the demands of his fellow protesters. So does his Instagram account, which has 11,000 followers.

While Latin America’s mass demonstrations draw all genders — and some are women-led — nearly all its citizen-superhero protesters are male. In Chile, women activists have donned creative masks and outfits, sometimes going topless at protests against gender violence and police abuse. They have not, however, adopted a superhero persona.

The all-male street superhero cast may reflect Latin America’s broader issues with gender inequity, and it mirrors the sparsity of women superheroes in both Latin American and US comic franchises. Only recently have Marvel and DC put out female-led films.

In Mexico — which has seen several recent feminist uprisings against rape and other forms of gender violence — the government recently created a coronavirus-fighting superheroine named Susana Distancia. Perhaps officials consciously sought to add a female-identified character into the mix of national superheroes. But their choice may have to do more with the rhyme of distancia — distance, as in social distancing.

Latin America’s activist superheroes skip the big screen to fight not aliens or supervillains but real-world injustices. Might gender equality be a future target?

This story has been updated to correct an error, introduced during editing, about the Mexican state in which the Zapatista movement originated.

This article is republished from The Conversation under a Creative Commons license.