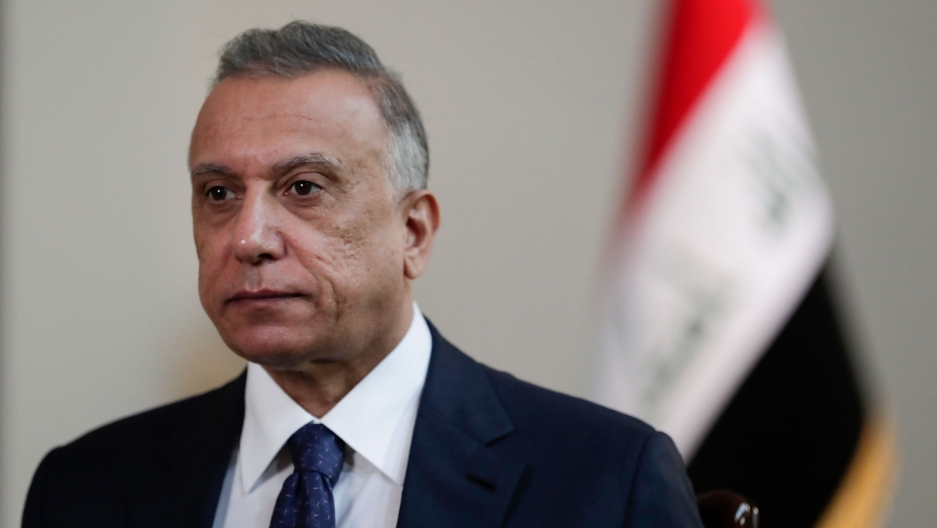 Iraqi Prime Minister Mustafa al-Kadhimi poses in his office during an interview with The Associated Press in Baghdad, Iraq, July 23, 2021.

The change of the American military mission, whose stated purpose is to help Iraq defeat ISIS, would shift the role to a strictly advisory and training capacity by year's end — with no US troops in a combat role — will be spelled out in a broader communique to be issued by the two leaders following their White House meeting on Monday afternoon, said the official, who spoke on the condition of anonymity to discuss the yet to be announced plan.

The announcement to end the US combat mission in Iraq, while it may not result in a substantial troop reduction, comes on the heels of Biden's decision to fully withdraw from Afghanistan nearly 20 years after President George W. Bush launched that war in response to the Sept. 11, 2001 attacks. Less than two years later, Bush started the war in Iraq. Biden has vowed to continue counterterrorism efforts in the Middle East but shift more attention to China as a long-term security challenge.

The senior administration official said Iraqi security forces are "battle tested" and have proved themselves "capable" of protecting their country. Still, the Biden administration recognizes that ISIS remains a considerable threat, the official said.

Indeed, the ISIS terror organization is a shell of its former self since it was largely routed on the battlefield in 2017. Still, it has shown it can carry out high-casualty attacks. Last week, the group claimed responsibility for a roadside bombing that killed at least 30 people and wounded dozens in a busy suburban Baghdad market.

The US and Iraq agreed in April that the US transition to a train-and-advise mission meant the US combat role would end, but they didn't settle on a timetable for completing that transition. The announcement comes less than three months before parliamentary elections slated for Oct. 10.

Al-Kadhimi faces no shortage of problems. Iranian-backed militias operating inside Iraq have stepped up attacks against US forces in recent months, and a series of devastating hospital fires that left dozens of people dead and soaring coronavirus infections have added fresh layers of frustration for the nation.

For al-Kadhimi, the ability to offer the Iraqi public a date for the end of the US combat presence could be a feather in his cap ahead of the election.

Last month, King Abdullah II of Jordan and Egyptian President Abdel Fattah al-Sisi visited Baghdad for joint meetings — the first time an Egyptian president has made an official visit since the 1990s, when ties were severed after Saddam Hussein invaded Kuwait.

In March, Pope Francis made an historic visit to Iraq, praying among ruined churches in Mosul, a former ISIS stronghold, and meeting with the influential Shiite cleric Grand Ayatollah Ali al-Sistani in the holy city of Najaf.

The US and Iraq have been widely expected to use the face-to-face meeting to announce plans for the end of the combat mission, and al-Kadhimi before his trip to Washington made clear that he believes it's time for the US to wind down the combat mission.

"There is no need for any foreign combat forces on Iraqi soil," al-Kadhimi told The Associated Press.

The US troop presence has stood at about 2,500 since late last year when former President Donald Trump ordered a reduction from 3,000.

The US mission of training and advising Iraqi forces has its most recent origins in former President Barack Obama's decision in 2014 to send troops back to Iraq. The move was made in response to ISIS' takeover of large portions of western and northern Iraq and a collapse of Iraqi security forces that appeared to threaten Baghdad. Obama had fully withdrawn US forces from Iraq in 2011, eight years after the US invasion.

The distinction between combat troops and those involved in training and advising can be blurry, given that the US troops are under threat of attack. But it is clear that US ground forces have not been on the offensive in Iraq in years, other than largely unpublicized special operations missions aimed at ISIS group militants.

Pentagon officials for years have tried to balance what they see as a necessary military presence to support the Iraqi government's fight against ISIS with domestic political sensitivities in Iraq to a foreign troop presence. A major complication for both sides is the periodic attacks on bases housing US and coalition troops by Iraqi militia groups aligned with Iran.

The vulnerability of US troops was demonstrated most dramatically in January 2020 when Iran launched a ballistic missile attack on al-Asad air base in western Iraq. No Americans were killed, but dozens suffered traumatic brain injury from the blasts. That attack came shortly after a US drone strike killed Iranian military commander Qassim Soleimani and senior Iraqi militia commander Abu Mahdi al-Muhandis at Baghdad International Airport.

The US military mission since 2014 has been largely focused on training and advising Iraqi forces. In April, in a joint statement following a US-Iraqi meeting in Washington, they declared, "the mission of US and coalition forces has now transitioned to one focused on training and advisory tasks, thereby allowing for the redeployment of any remaining combat forces from Iraq" at a time to be determined later.