When temperatures get this high, there’s no better time to do research on China’s hottest — or, shall we say, coolest — new trend: ice cream that has everyone posting on social media. Tourist spots around the country are featuring specialty destination popsicles. In Beijing, there’s one shaped like the Great Wall of China, and in Xi’an, you can find popsicles shaped like Terracotta Warriors.

At a local 24-hour convenience store, there are the traditional chocolate and vanilla-flavored popsicles in the freezer. But then there are also milk flavors, along with red adzuki bean and green mung bean-flavored popsicles. Most Chinese people grew up with these flavors, and they still remain popular today. 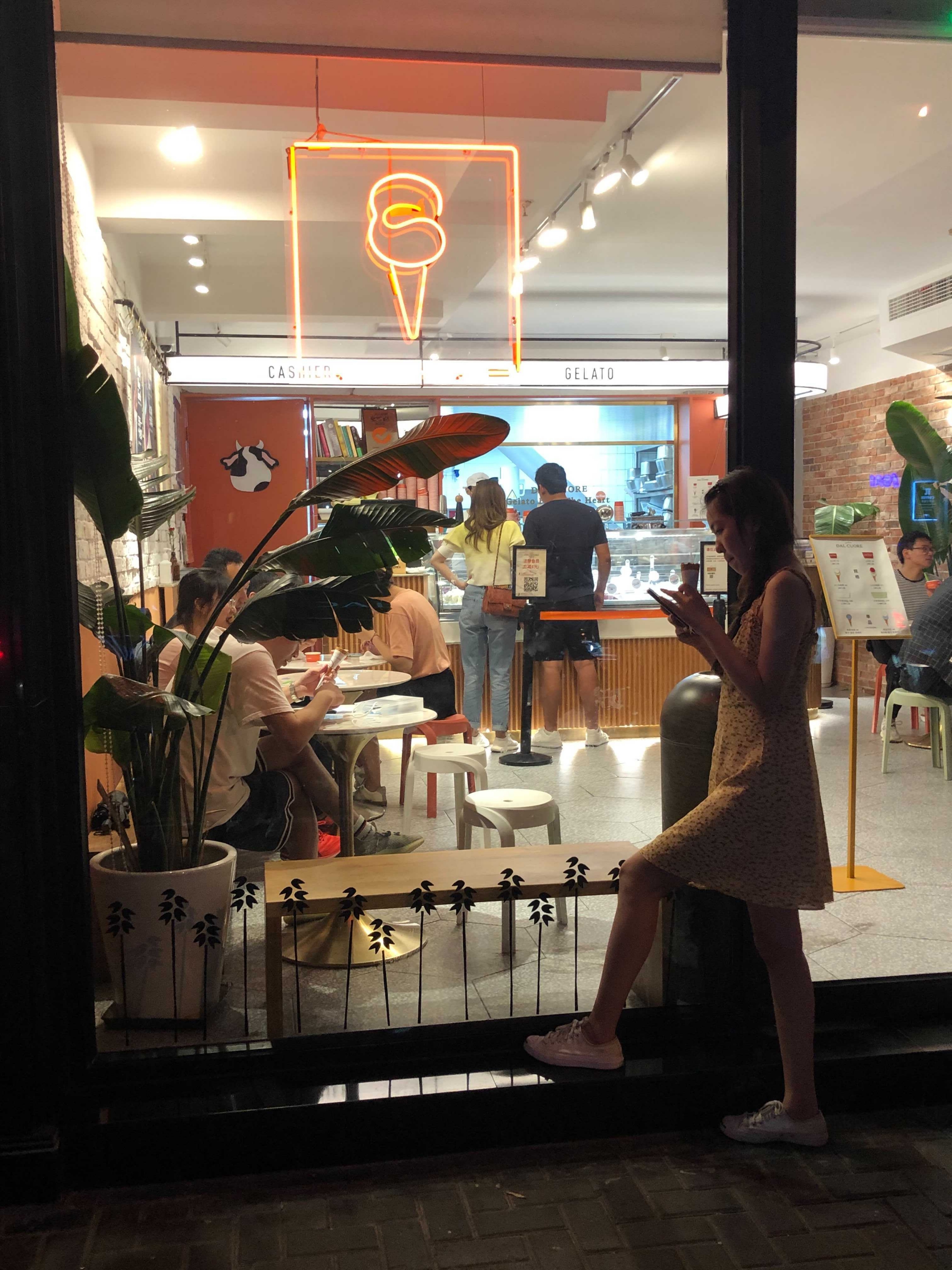 Other new flavors are also gaining ground — there’s boba tea-flavored ice pops with frozen tapioca pearls. And a newer addition: the White Rabbit. It tastes like a nostalgic Chinese candy that everybody eats when they were kids.

In China, Shanghai is the main place for trendy ice cream. There are numerous gelato shops. And it seems like each one tries to outdo the rest.

Bonus Gelato was one of the first in town to explore flavors more familiar to Chinese customers. People will wait in long lines for ice cream with names like salted egg yolk, Chinese pecan and yellow rice wine. This summer, it’s serving up full-bodied flavors like blue cheese with cashews — it’s not their most popular offering but it’s extremely rich and flavorful.

The owner is Lu Xiaoxun. Like many young Chinese, he has traveled the world. He said innovative ice cream shops like his are now tourist attractions for people who can’t go abroad because of pandemic travel restrictions. He said that his gelato is gaining fans among Chinese people who can’t stomach Western styles.

"I make my gelato maybe 30% less sweet than American or European style[s].”

“Whatever can make you fat … that’s what Americans want in their ice cream,” he said. “Chinese people want a less sweeter flavor. I make my gelato maybe 30% less sweet than American or European style[s].” 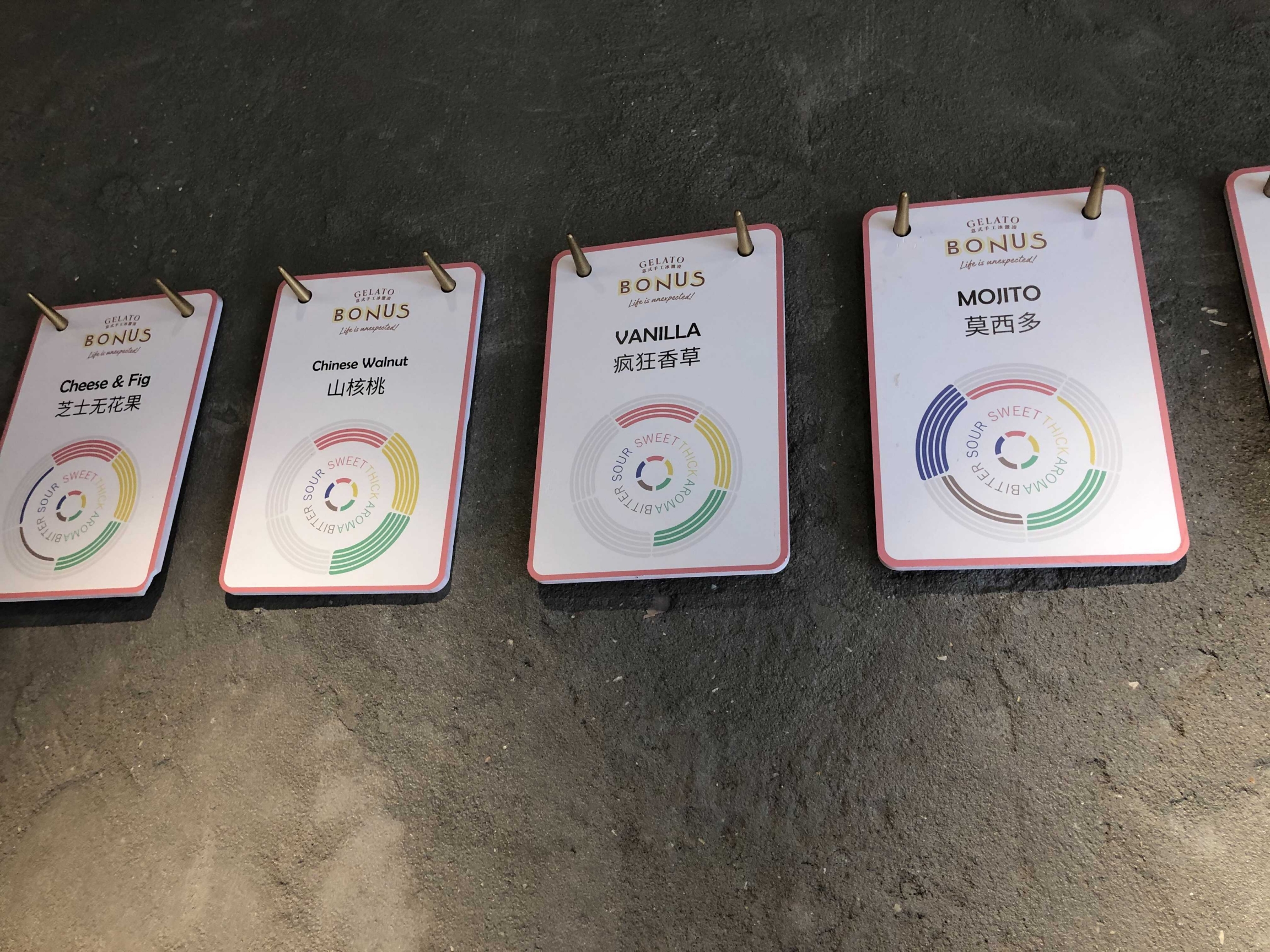 On the wall, placards describe each flavor’s taste profile — like a fine wine.

He said, “This one, the jasmine tea flavor, is aromatic and light, with very little sour or bitter notes and only slightly sweet.”

Next stop: Gelato Dal Cuore. It was opened by a Chinese and Singaporean couple.

The most popular flavor is simply called Earth. Nearly everyone in the shop is taking photos of themselves eating it. It’s vegan, made with oat milk, and it has blue and green swirls — so it really does look like Earth. 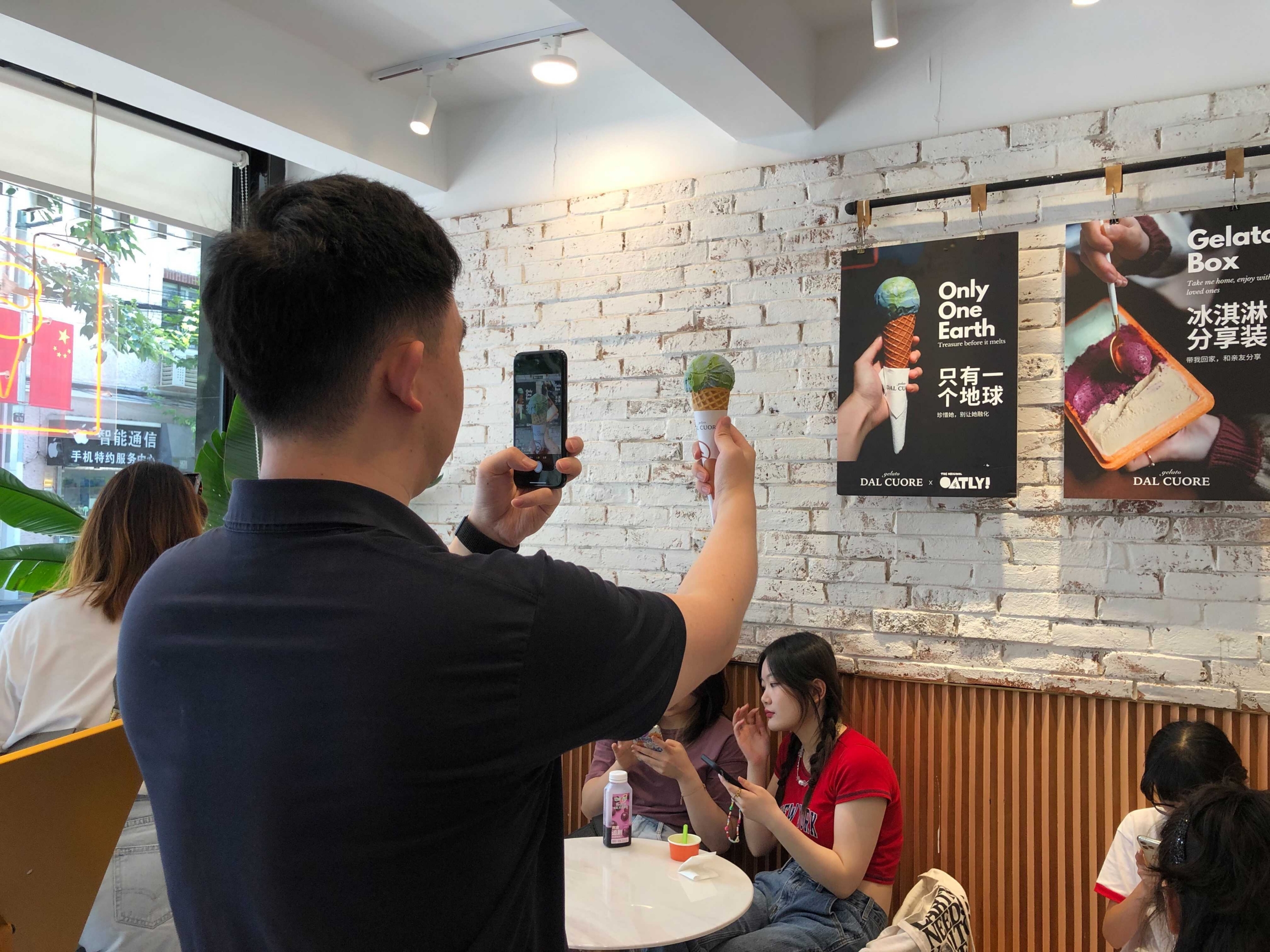 The Earth cone is popular at Gelato Dal Cuore in Shanghai, China.

There are 16 flavors in the display case, and they change daily. Some of the samples include pistachio and watermelon, but also passion fruit beer, black sesame, and pineapple with Sichuan peppercorn.

Co-owner Gerard Low is in charge of developing the flavors. He trained in the US, at Penn State — where the founders of Ben and Jerry’s got their start — and also in Italy, where gelato originated. But he says the future of ice cream is here — in China.

“Because we come up with all these crazy flavors,” he said, “and, yet, it's still very well-received. They’re always looking out for new things, new things especially that they can post on social media.”

Related: China now allows 3 kids per family, but many couples say they can’t afford it

That’s what CC Cao is here for.  She’s spending the summer traveling around China before heading back to the US for graduate school. 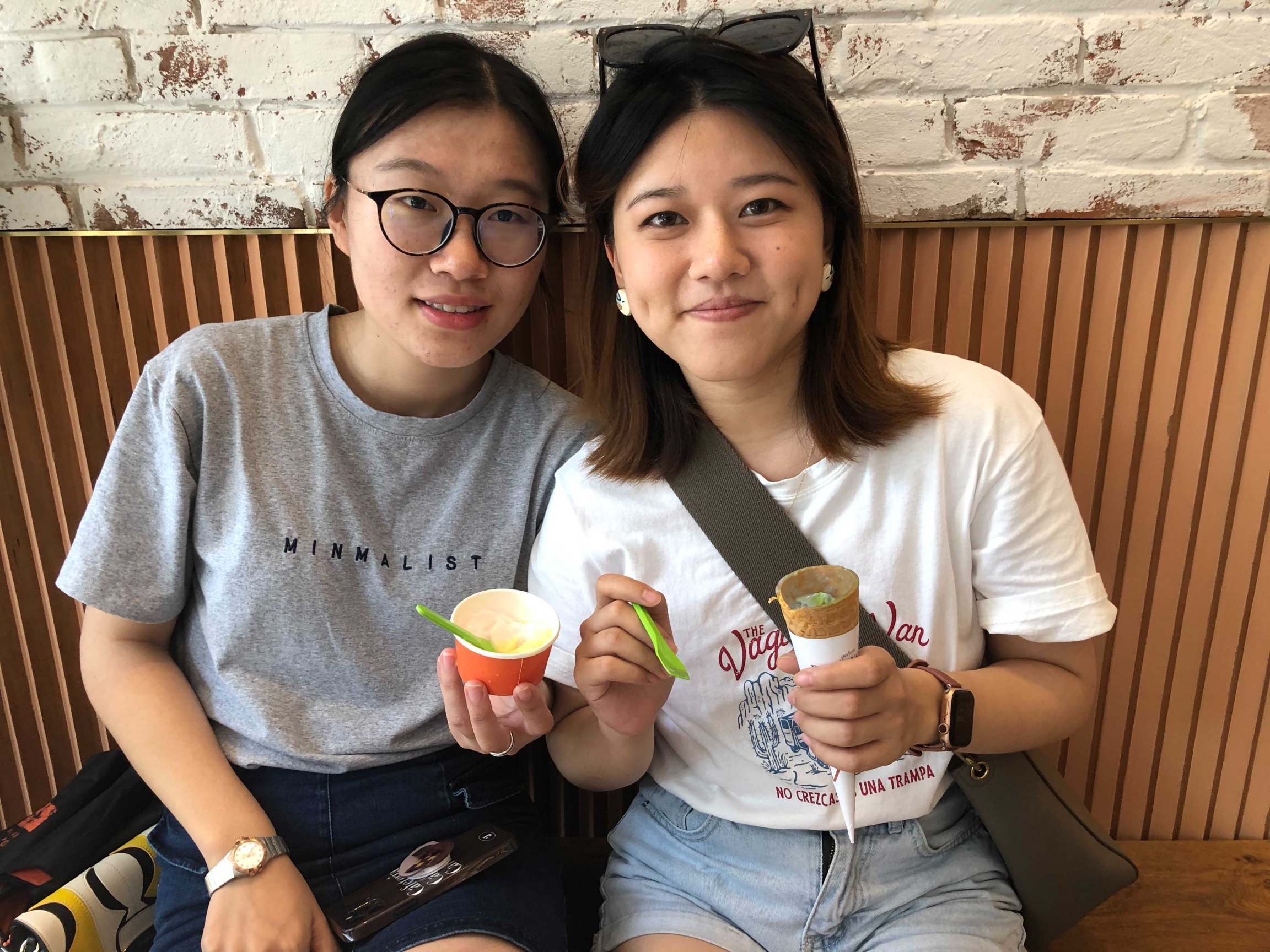 “I think the Earth got the win,” she said, “because it looks good, and it tastes not bad, you know, you’re eating our Earth, so it doesn’t minus any points from it.”

A few tables down, Qian Feng is with two friends. They decided he’s the adventurous one, so they got him to order the Shanghai scallion noodle gelato.

Cao said she also tried the scallion noodle flavor. “So we tried that and it wasn’t, it wasn’t so good. I mean … ew."

Related: Massive celebrations planned for 100th anniversary of the Communist Party of China

Gelato Dal Cuore owner Gerard Low said it’s actually not so unusual when you think about the ingredients of scallion noodle gelato. It’s basically sweet and savory — with sweetness from sugar and umami from soy sauce. But, he said, you need to take a few licks to let it grow on you. 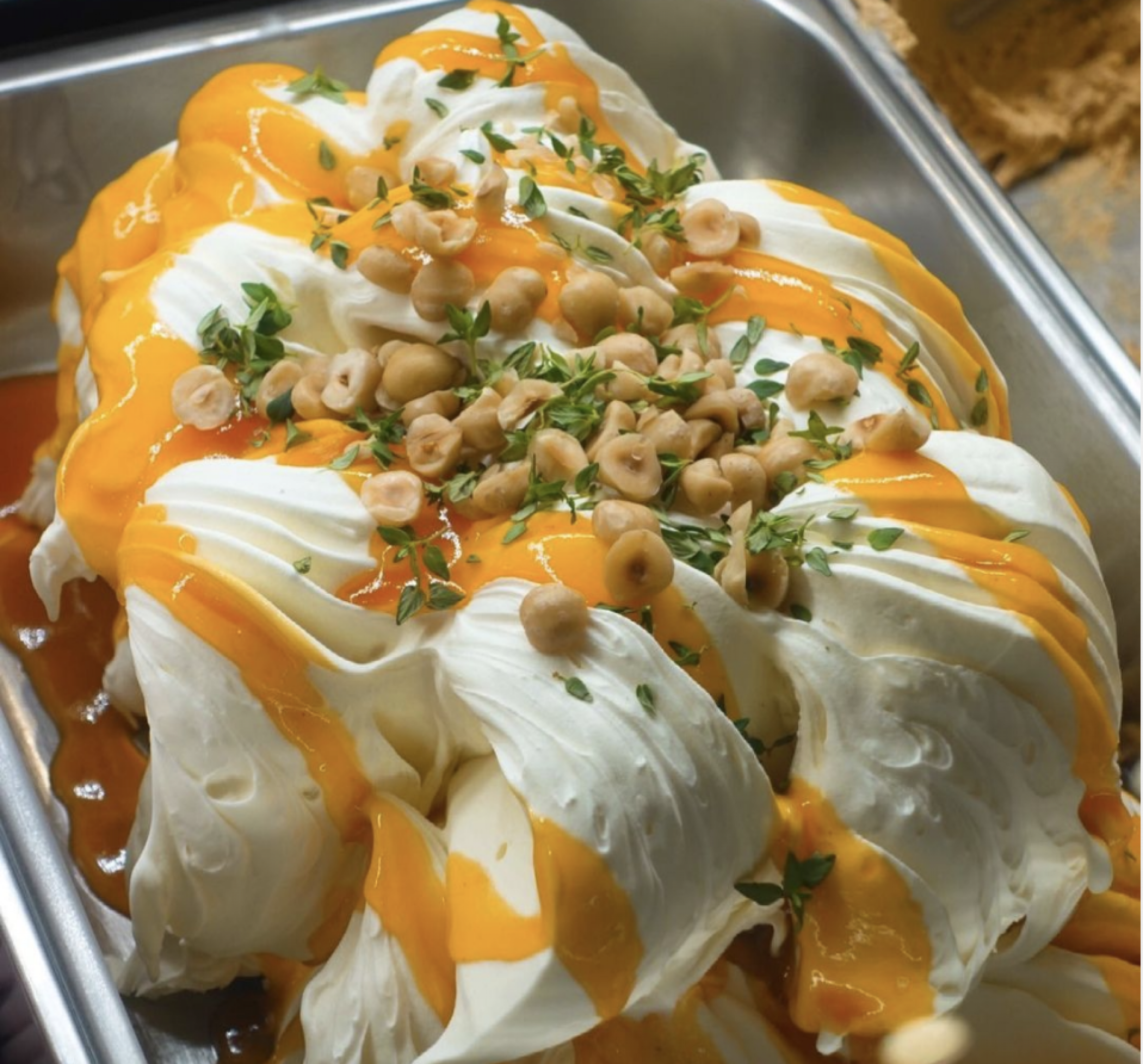 Low and Lu Xiaoxun, the owner of Bonus Gelato shop, both said China’s ice cream market is just taking off, the way coffee was in the country 30 years ago. If that’s the case, then perhaps we’re in for a treat.