Corks popped, beats boomed out and giddy revelers rushed onto dancefloors when England's nightclubs reopened Monday as the country lifted most remaining coronavirus restrictions after more than a year of lockdowns, mask mandates and other pandemic-related curbs on freedom.

For clubbers and nightclub owners, the moment lived up to its media-given moniker, "Freedom Day." But the big step out of lockdown was met with nervousness by many Britons and concern from scientists, who say the UK is entering uncharted waters by opening up when confirmed cases are not falling but soaring.

As of Monday, face masks were no longer legally required in England, work-from-home guidance ended and, with social distancing rules shelved, no limits existed on the number of people attending theater performances or big events.

For nightclubs, it is the first time they have been allowed to open in almost 18 months, and from London to Liverpool, thousands of people danced the night away at "Freedom Day" parties starting at midnight.

"I'm absolutely ecstatic," clubgoer Lorna Feeney said at Bar Fibre in the northern England city of Leeds. "That's my life, my soul — I love dancing. It bonds me,. It's amazing. It makes me feel so good."

At The Piano Works in London, patrons packed the area around the cordoned-off dance floor on Sunday night as a host led a countdown to midnight.

Once a ceremonial ribbon was cut, the crowd ran toward the dance floor as confetti canons went off and a disco ball spun above. Soon, unmasked clubgoers dancing to a live band's rendition of Whitney Houston's "I Wanna Dance With Somebody" filled the floor.

One of the people attending The Piano Works party, Mark Troy, called the return of nightclubs "a most joyous occasion." 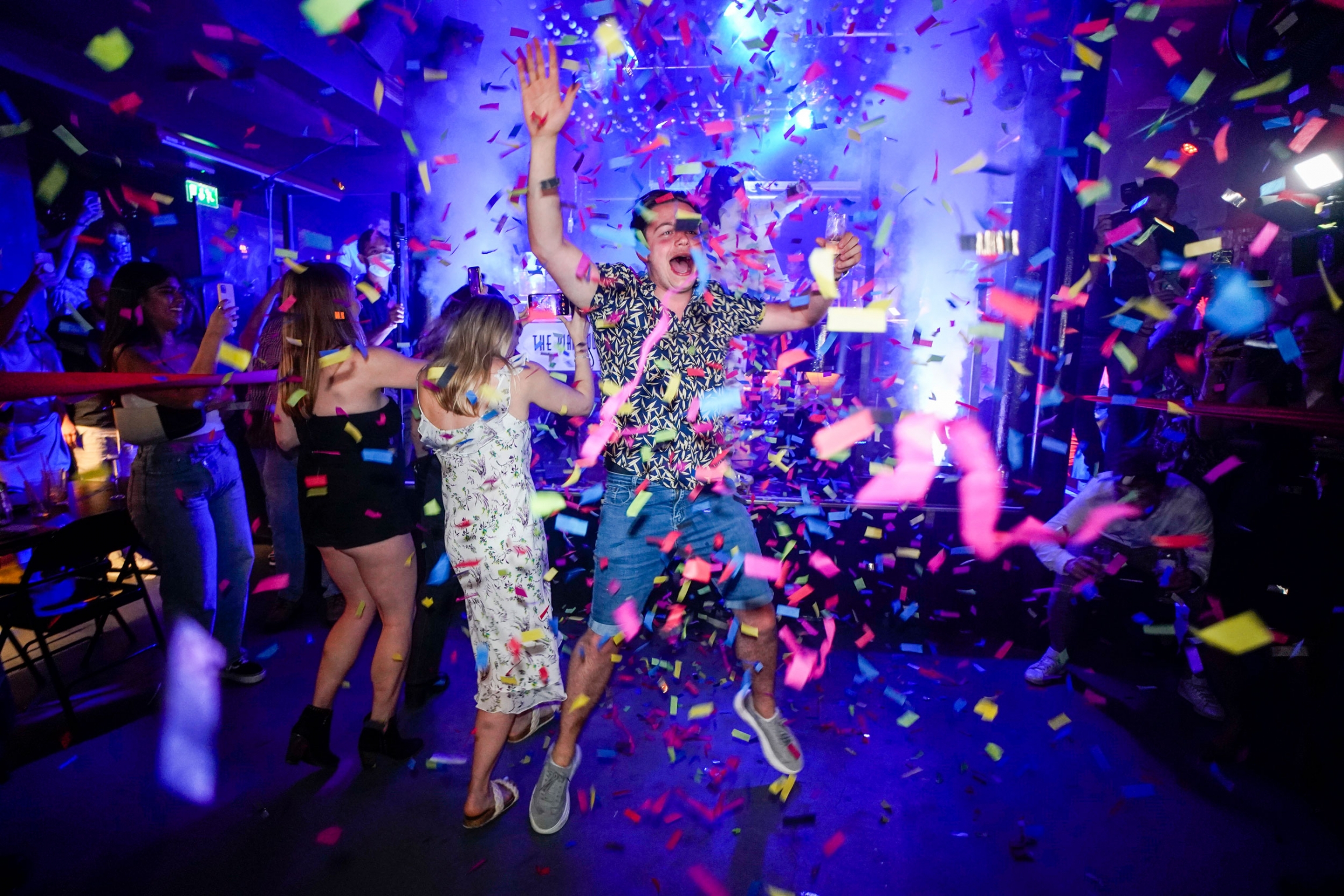 A man jumps on the dance floor shortly after the reopening, at The Piano Works in Farringdon, in London, July 19, 2021. The country's nightclubs are reopening for the first time in 17 months as almost all coronavirus rules are set to be scrapped.

But while entertainment businesses and ravers are jubilant, many others are deeply worried about the British government's decision to scrap restrictions at a time when COVID-19 cases are on a rapid upswing due to the highly infectious delta variant first identified in India. Cases topped 50,000 per day last week for the first time since January, although virus deaths remain comparatively low so far.

Prime Minister Boris Johnson, who has dialed down talk of freedom in recent weeks, urged the public to exercise "prudence and respect for other people and the risks that the disease continues to present."

In a reminder of how volatile the situation is, the prime minister was spending "Freedom Day" in quarantine. Johnson and Treasury chief Rishi Sunak are both self-isolating for 10 days after contact with Health Secretary Sajid Javid, who tested positive for COVID-19 on Saturday.

Johnson initially said he would take daily tests instead of self-isolating — an option not offered to most people — but U-turned amid widespread public outrage.

The prime minister is among hundreds of thousands of Britons who have been told to quarantine because they have been near someone who tested positive. The situation is causing staff shortages for businesses including restaurants, car manufacturers and public transport.

Globally, the World Health Organization says cases and deaths are climbing after a period of decline, spurred by the delta variant. Like the UK, Israel and the Netherlands both opened up widely after vaccinating most of their people, but had to reimpose some restrictions after new infection surges. The Dutch prime minister admitted that lifting restrictions too early "was a mistake."

In the US, many areas abandoned face coverings when the Centers for Disease Control and Prevention said fully vaccinated people didn't need to wear them in most settings. Some states and cities are now trying to decide what to do as cases rise again.

British officials have repeatedly expressed confidence that the UK's country's vaccine rollout — 68.3% of adults, or just over half of the total population, has received two doses — will keep the threat to public health at bay. But leading international scientists described England's "Freedom Day" as a threat to the whole world, and 1,200 scientists backed a letter to British medical journal The Lancet that criticized the Conservative government's decision.

"I can't think of any realistic good scenario to come out of this strategy, I'm afraid," said Julian Tang, a clinical virologist at the University of Leicester. "I think it's really a degree of how bad it's going to be."

Tang said nightclubs in particular are potent spreading grounds, because they increase close physical contact among a core customer base — people 18 to 25 — that has not yet been fully vaccinated.

"That's the perfect mixing vessel for the virus to spread and to even generate new variants," he said.

The government wants nightclubs and other crowded venues to check whether customers have been vaccinated, have a negative test result or have recovered from the disease.

There is no legal requirement for them to do so, however, and most say they won't. Michael Kill, chief executive of the Night Time Industries Association, said many owners see the passes as a huge turn-off for customers and accuse the government of "passing the buck" to businesses.

"Either mandate it or don't mandate it," Kill said. "This is putting an inordinate amount of pressure on us."

Johnson's decision to scrap the legal requirement for face masks in indoor public spaces — while recommending people keep them on — has also sowed confusion.

London Mayor Sadiq Khan has said they will remain mandatory on the capital's subways and buses, and some retailers said they would encourage customers to keep their masks on. But many believe implementing such policies will be tricky without the backing of the law.

Psychologist Robert West, who sits on a science panel that advises the government, said telling people to be careful without giving them thorough knowledge of risks was "like putting someone out on the road without having taught them to drive."

The end of restrictions in England is a critical moment in Britain's handling of the pandemic, which has killed more than 128,000 people nationwide, the highest death toll in Europe after Russia. Other parts of the UK — Scotland, Wales and Northern Ireland — are taking slightly more cautious steps out of lockdown and keeping mask requirements for now.

At the Egg nightclub in London, clubber Alex Clark acknowledged feeling "a bit of apprehension and uncertainty."

"There's zero concern," he said. "The only concern is why we haven't been here for a year and a half. It's been a very long time since we've been out.

Sylvia Hui and Jo Kearney in London contributed to this story.