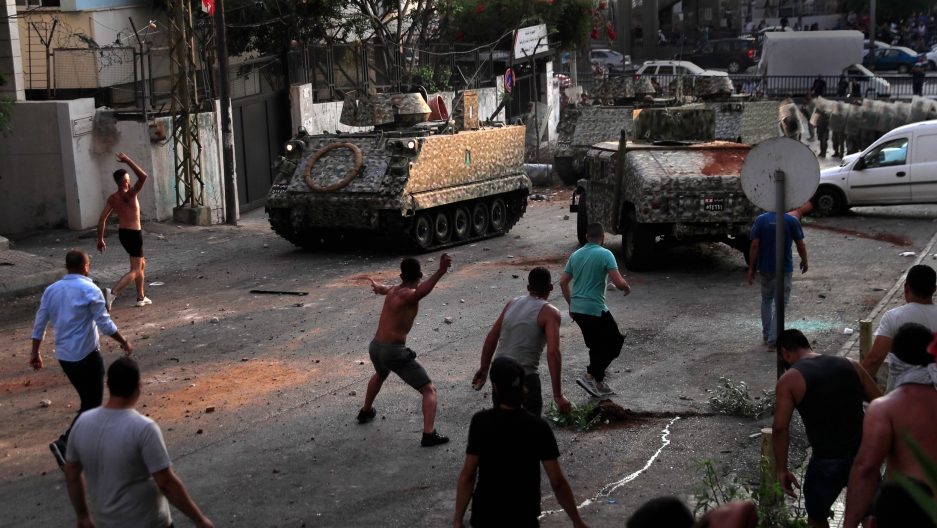 Supporters of Prime Minister-designate Saad Hariri who stepped down on Thursday, clashes with Lebanese soldiers as they throw stones against their armored personnel carriers, in Beirut, Lebanon, July 15, 2021.

Riots erupted on Friday in Lebanon leaving more than two dozen people injured in the northern city of Tripoli, including five soldiers who were attacked with a hand grenade.

France, the European Union and the United States in the meantime called on Lebanese politicians to urgently form a Cabinet and planned an international conference to help stabilize Lebanon after a series of crises.

"All concerned parties need to work with urgency to put in place a government that's able to implement reforms immediately," tweeted US Secretary of State Antony Blinken.

The announcements came at a moment of great uncertainty for Lebanon after Prime Minister-designate Saad Hariri stepped down on Thursday over disagreements with the president on the shape of the Cabinet. Hariri did not endorse anyone else to take the post. Hundreds of his supporters rioted in the streets, blocked major roads and hurled stones.

On Friday morning, the Lebanese pound hit a new low, reaching 23,400 to the dollar on the black market.

President Michel Aoun was expected to call for consultations with heads of parliamentary blocs; the person who gets the most support will be asked to work on forming a new Cabinet.

In the northern city of Tripoli, Lebanon's second largest and most impoverished, residents angry over rising prices, electricity cuts that last for most of the day and severe shortages in diesel and medicine, rioted in the streets and attacked Lebanese troops.

The Lebanese Red Cross said its paramedics took 19 injured to hospital. The Lebanese army said 10 soldiers were injured by stones hurled by protesters while five others were wounded when attacked with a hand grenade. It was not immediately clear who threw the grenade.

The Biden administration expressed disappointment that Lebanese political leaders have squandered the last nine months since Hariri was named premier-designate.

The EU's foreign policy chief, Josep Borrell, said Lebanese leaders are responsible for solving "the current domestic, self-made crisis," adding that it is urgent to form a new Cabinet quickly. He said that an agreement with the International Monetary Fund remains essential to rescue Lebanon from financial collapse.

"Lebanon's stability and prosperity are crucial for the whole region and for Europe," Borrell said in a statement.

France, once Lebanon's colonial ruler, has been urging Lebanese political leaders to quickly form a government tasked with implementing badly needed reforms and fighting corruption that has brought Lebanon to near bankruptcy.

France's Foreign Affairs Ministry said the latest development confirms the political deadlock in which "Lebanese leaders have deliberately held the country back for months, even as it sinks into an unprecedented economic and social crisis."

The ministry said that there is now "an absolute urgency to come out of this organized and unacceptable obstruction." France, with the support of the United Nations, was calling an international conference for Aug. 4, it added.

The date marks the first anniversary of a massive explosion at Beirut's port that killed more than 200 people, injured over 6,000 and damaged entire neighborhoods in the city. The blast was caused by the ignition of hundreds of tons of ammonium nitrate, a highly explosive fertilizer that had been stored for years at the port with the knowledge of top government officials.

Lebanon has been without a full-functioning government since the Cabinet of Prime Minister Hassan Diab resigned days after the blast.

France hosted an economic conference for Lebanon in April 2018 that promised investments and loans worth billions in return for reforms. The funds were never released as Lebanon's political class, which has been blamed for decades of corruption and mismanagement, continued with business as usual.