The motorcycle riders are providing a key service weave through the jammed vehicles, honking their horns as they flank ambulances trying to find their way through the traffic-choked streets of Indonesia's capital region. 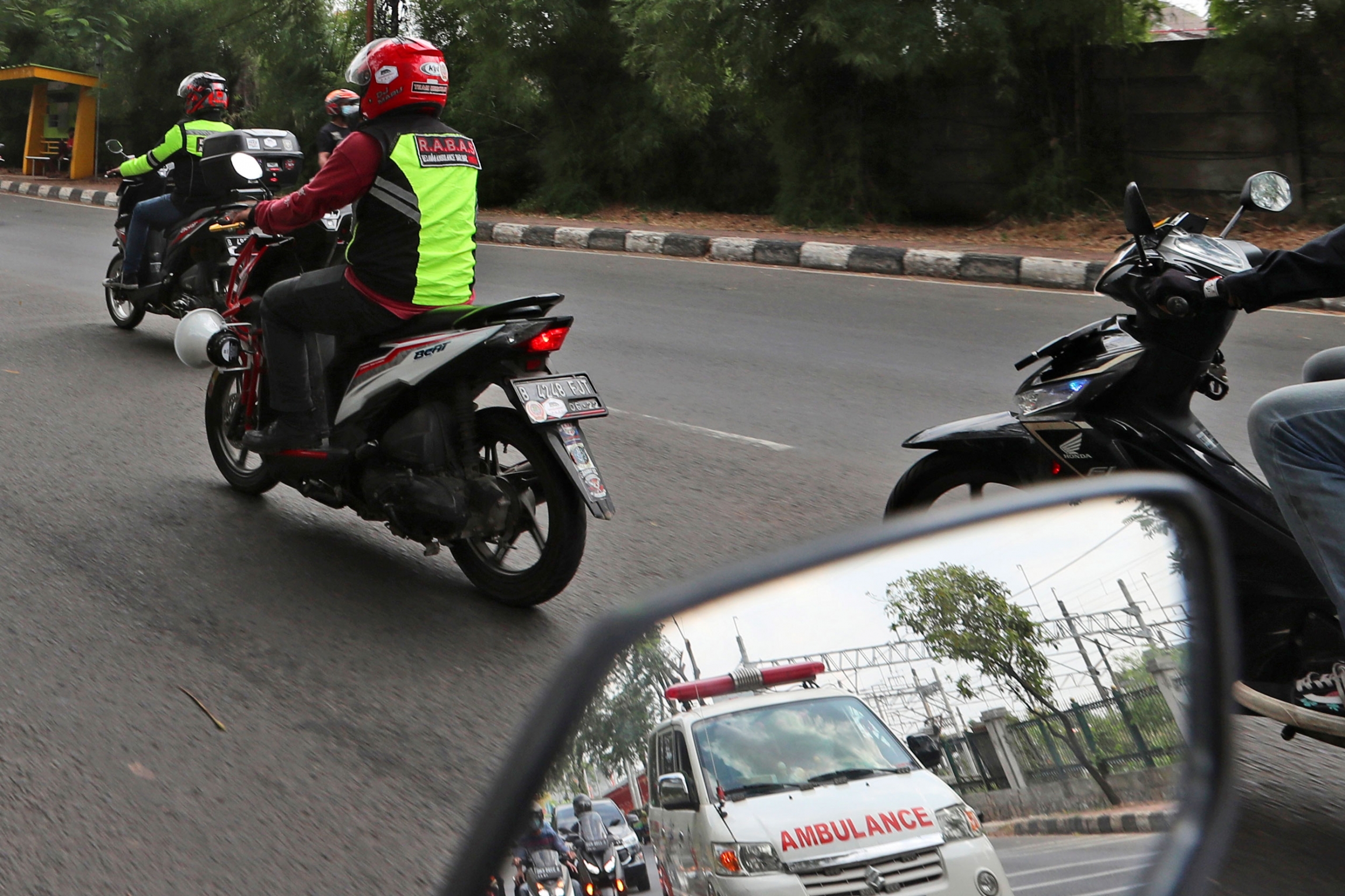 Motorcycle volunteers escort an ambulance on the outskirts of Jakarta, Indonesia.

The two-wheeled volunteers are needed more than ever as ambulances struggle to serve all those in need because of a surge in coronavirus infections and deaths. 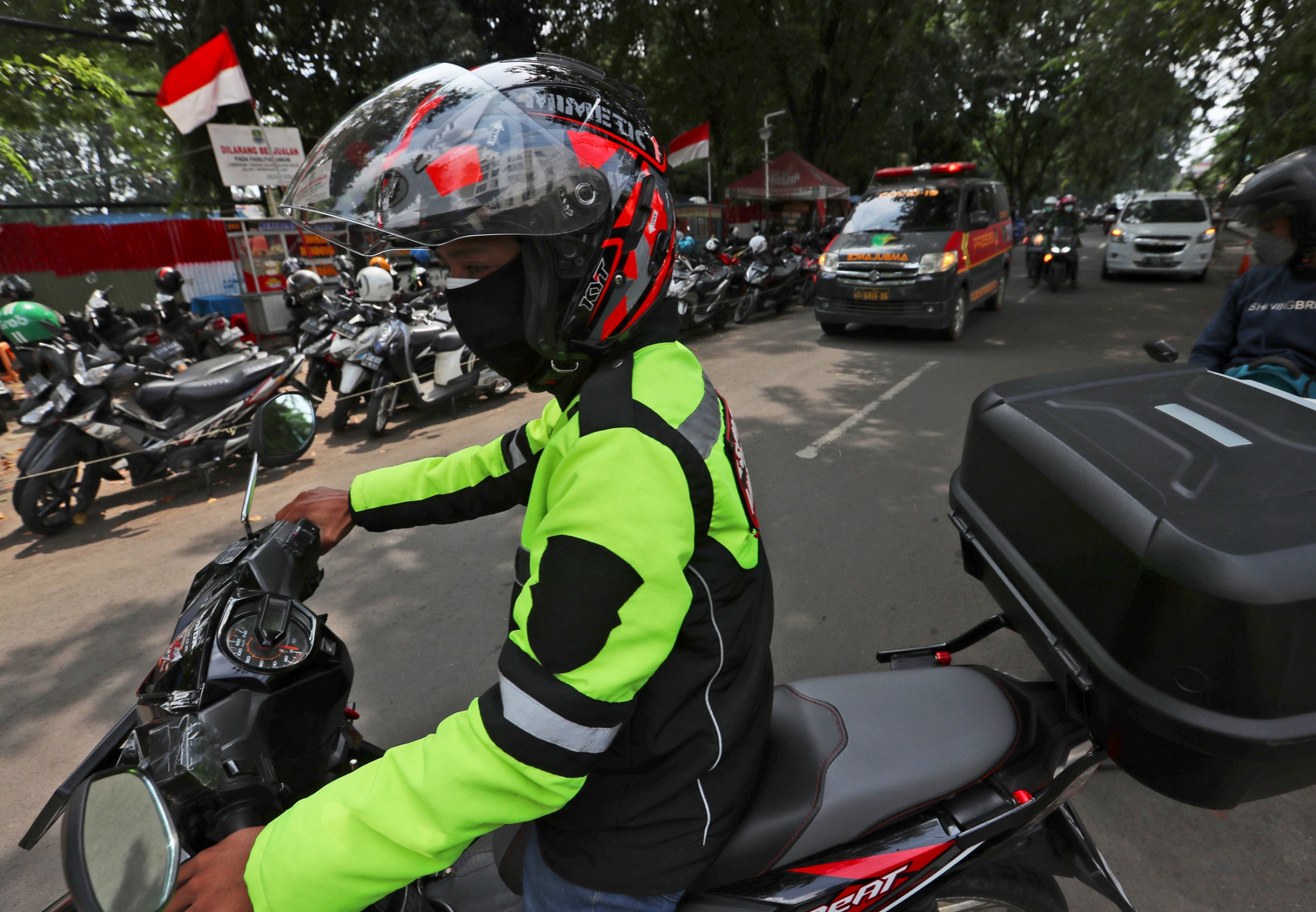 The two-wheeled volunteers like this provide a key service in the sprawling metropolis of Jakarta, Indonesia, where ambulances struggle to serve all those in need because of a surge in coronavirus infections.

The volunteers usually get a call from ambulance drivers asking them to stand by in case an escort is needed. If it is, up to four riders will head out to guide the ambulance through the congested roads and other obstacles of the Jakarta area. 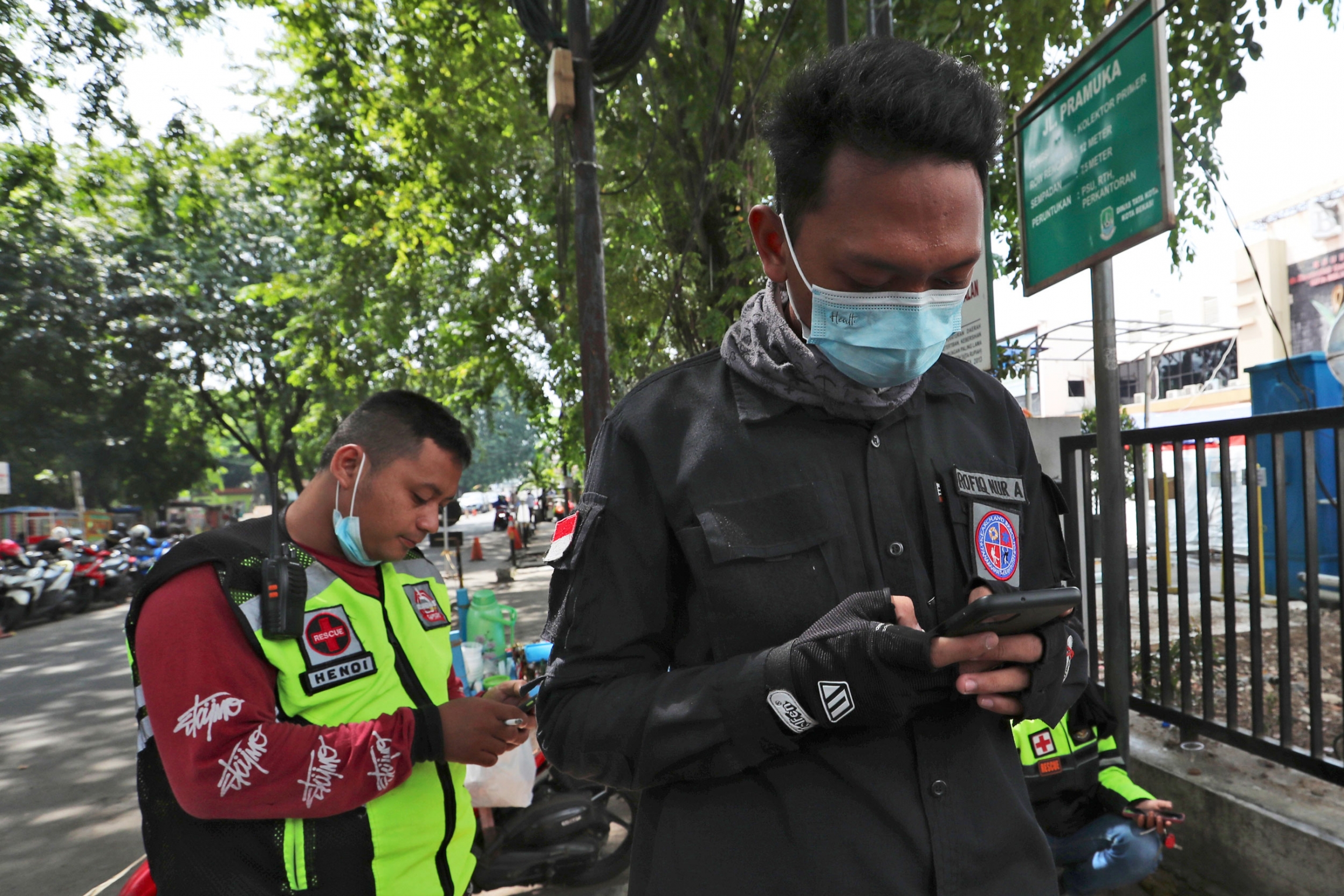 Motorcycle volunteers Hendi and Rofiq Nur check their mobile phone as they take a break in Bekasi on the outskirts of Jakarta, Indonesia.

"Not everyone on the road can accept it. Sometimes they get mad. Sometimes they just let us pass. But mostly the main problem is the traffic. So we have to open the ambulance path so the patients can survive," said volunteer Rofiq Nur Amrullah. 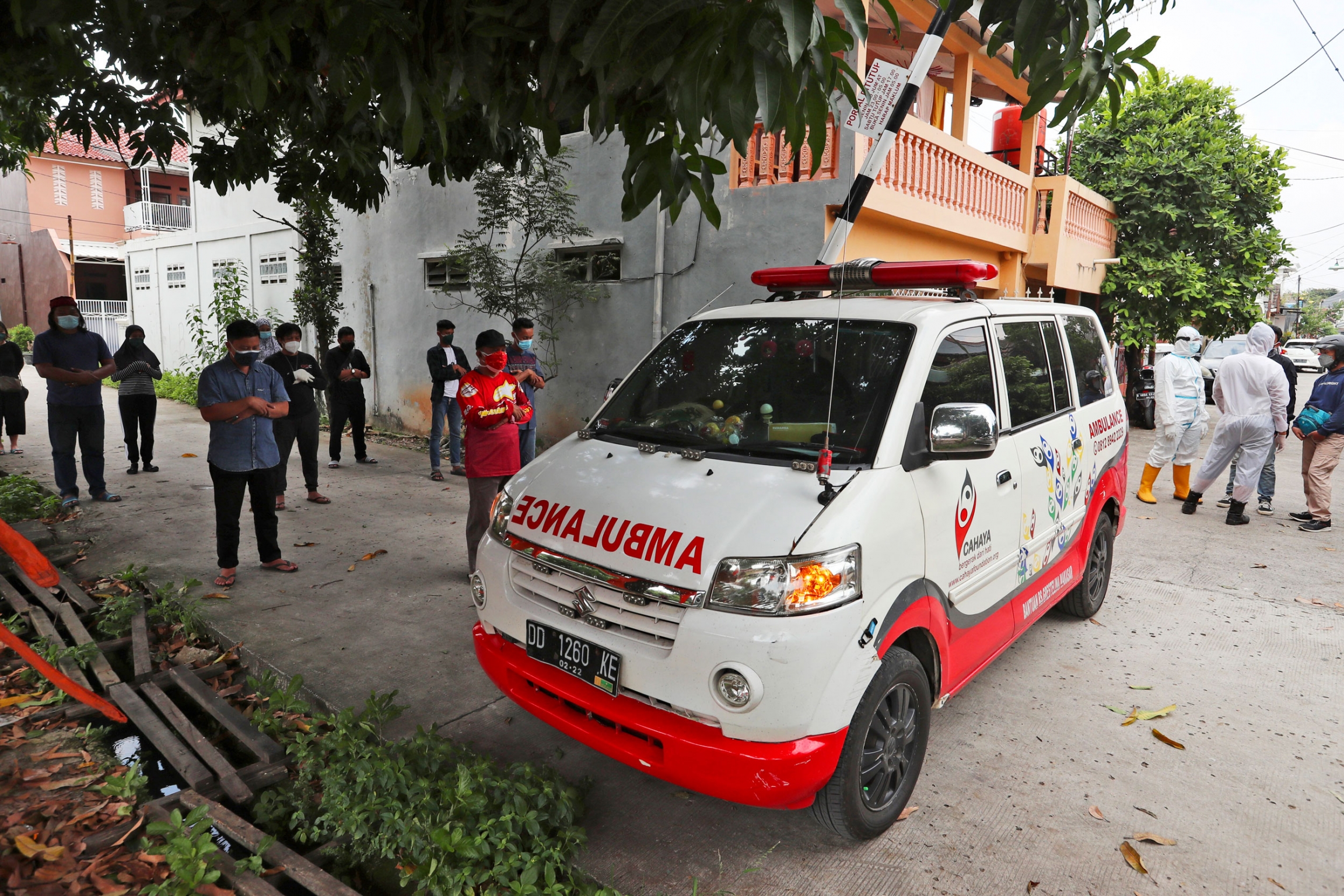 Volunteers join relatives to pray near an ambulance carrying the body of a COVID-19 victim prior to escorting it to a cemetery for burial, in Bekasi on the outskirts of Jakarta, Indonesia.

For Amrullah, who has been serving as a motorcycle escort since 2018, volunteering was spurred by personal tragedy. Years ago, Amrullah's aunt died in an ambulance stuck in a traffic jam while on the way to a hospital, even though she lived close by. 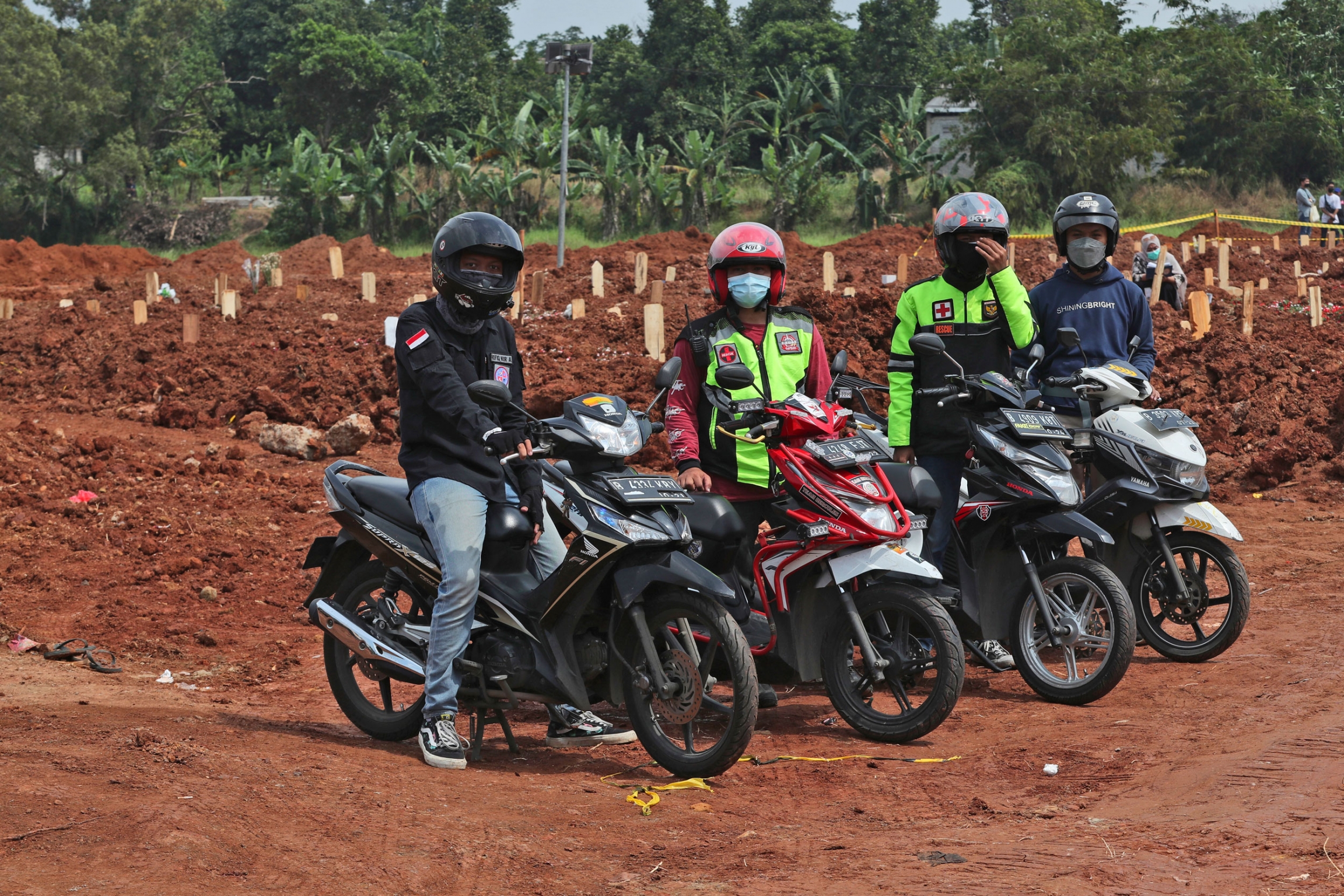 Motorcycle volunteers pose for a photo after escorting an ambulance carrying the body of a COVID-19 victim, at Pedurenan cemetery in Bekasi on the outskirts of Jakarta, Indonesia.

"There were not many bikers for the ambulance escort service that time," Amrullah said.

The escorts are busier than ever because of the deadly virus surge that has pushed many hospitals over capacity and caused shortages of oxygen. 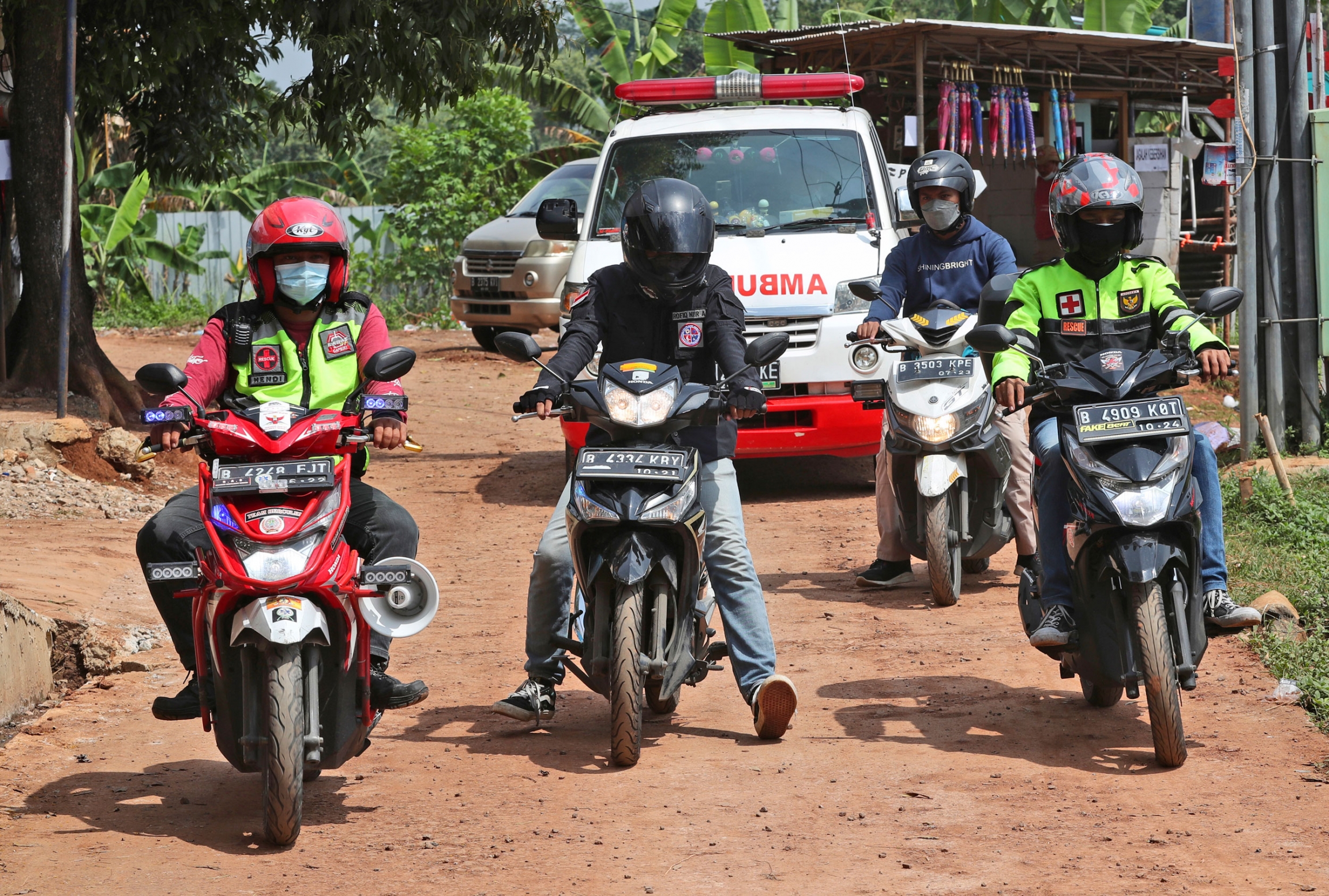 Motorcycle volunteers escort an ambulance to a cemetery in Bekasi, Indonesia.

And because of the surge, many volunteers are finding they're also being asked to escort hearses making their way to graveyards.

"I escorted not only the patients to the hospital but also the dead body to the burial place," said Hendi, a volunteer who only uses one name. "Wherever the destination, I will open the access." 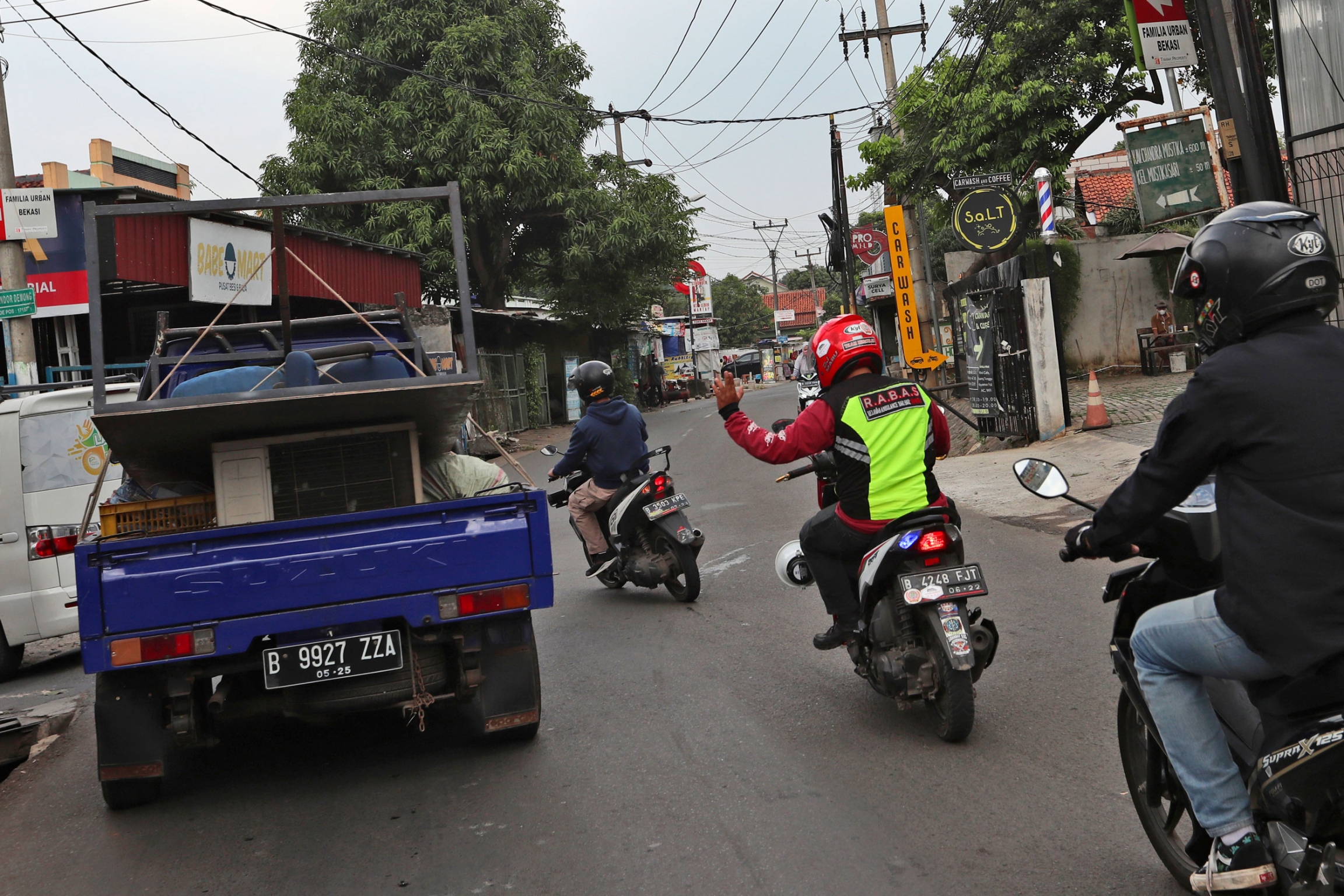 Motorcycle volunteers clear traffic for an ambulance carrying the body of a COVID-19 victim.