In the four-part National Geographic video series, “Secrets of the Whales,” one theme comes up again and again: Whales have distinct cultures — and not just between different species of whales, but between different pods, or families.

“That is the essence of ‘Secrets of the Whales,'” says Brian Skerry, a National Geographic photojournalist who spent three years filming the series. “When I created this, I saw this as a game changer — that the latest and greatest science was revealing that these charismatic ocean animals are showing behaviors that are really cultures, not unlike humans.”

Skerry's friend, Dr. Shane Gero, a sperm whale biologist, defines it this way: Behavior is what we do; culture is how we do it. “So, for example, most humans eat food with utensils. That would be behavior. But whether you use knives and forks, or chopsticks, that is culture,” Skerry explains. 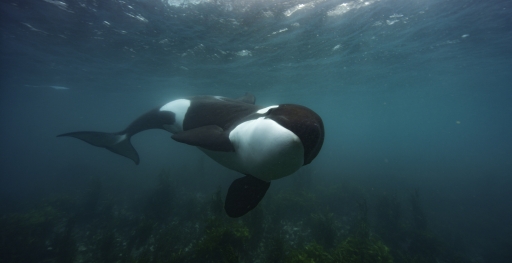 “They not only figured out this stuff, which is culture, but they pass it on to their children,” Skerry says. “So, they are not only teaching their offspring the skills that they will need to survive, but they're teaching them their ancestral traditions, the things that matter to them.”

Whales even have unique dialects, Skerry adds. Sperm whales that Dr. Gero studies in the eastern Caribbean all speak the same dialect and belong to a clan. And they don't intermingle with other sperm whales that might enter the same waters, but speak another language.

“I think we can look at culture from a number of perspectives, but it's clear that, like humans, they are doing things differently, and what they know about their regions, their geographic location, is unique to them, and that's what they celebrate."

“I think we can look at culture from a number of perspectives, but it's clear that, like humans, they are doing things differently, and what they know about their regions, their geographic location, is unique to them, and that's what they celebrate,” Skerry says.

The second part of the series is about humpback whales and it explores some fascinating traits that reveal the ways these whales maintain deep social bonds among themselves.

Males, for instance, make up a new song each year that can travel thousands of miles. Skerry calls it the "American Idol" of the sea.

“It's a bit of a singing competition. ... One tune gets to be the winning tune and they adopt it and everybody sings that same song, pretty much." 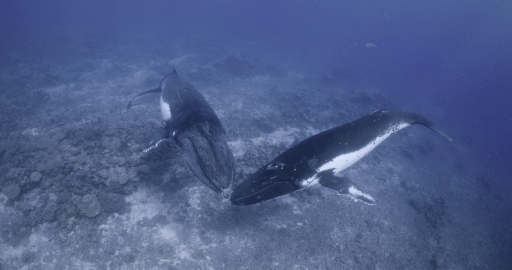 Only male humpbacks sing their famous songs - perhaps to attract a willing mate.

“It's a bit of a singing competition where…these males will compete every year at the beginning of the year, with a tune,” he explains. “One tune gets to be the winning tune and they adopt it and everybody sings that same song, pretty much. They might add little bits and pieces here and there, but they essentially pass it across the entire ocean. It's been described in scientific papers as the ‘horizontal transmission of culture.’”

Female Humpback whales invest a huge amount of time and energy into their calves. There is a year-long gestation period and then for the first year of its life, a calf learns everything it needs to know from its mother.

“It is joined at the hip. They’re up nuzzling next to its chin, and going along next to its eye, and then nursing underneath,” Skerry explains. “[Y]ou see this tenderness, this absolute love that's being shared by the mom and calf.”

Then they have to make an epic journey to the feeding grounds. Skerry says new science reveals that humpback whale mothers whisper to their babies when they're passing through areas that might have predators, so the whales won’t give away their location.

“I think there's just so much richness to these bonds, these relationships, and so much of that we don't fully understand, as well,” Skerry says.

There are stories of humpback whale mothers whose babies did not survive for some reason, pushing them through the water for days even weeks, unable to let go of their lost child. Skerry captured a similar phenomenon in the orca episode, when, in the Norwegian Arctic, he witnessed what could only be called a funeral procession.

“This mom, carrying its dead baby and all the other members of the family sort of protecting the mom and calf — and you see this grief. There’s no other way to interpret that, I think, than mourning."

“This mom, carrying its dead baby and all the other members of the family sort of protecting the mom and calf — and you see this grief,” he says. “There’s no other way to interpret that, I think, than mourning. It was very emotional for me to be able to see that.”

“Clearly, these animals have empathy and share grief and joy,” Skerry says. “And I think that's the message of 'Secrets of the Whales,' is that if we can see our planet, the ocean, through the lens of culture, through the lens of these animals that have rich societies, then maybe we [can] change our view of our connection to the natural world and maybe protect this beautiful planet on which we live.”

This article is based on an interview that aired on Living on Earth from PRX.