In a country known for its cuisine, there’s one fast-food item that locals can’t seem to get enough of: gyro.

Gyro consists of a warm pita stuffed with pieces of meat — usually pork or chicken — shaved off a vertical spit and served with tzatziki yogurt sauce, tomato, french fries, onion and other sauces.

Related: 'They want to make the Acropolis into Disneyland.' Site renovations face backlash.

“It’s like the holy grail for the Greeks. It’s the No. 1 thing. The meat, the sauces — we Greeks are kind of obsessed with this.”

“It’s like the holy grail for the Greeks. It’s the No. 1 thing. The meat, the sauces — we Greeks are kind of obsessed with this,” said Alexandros Alexandratos, a former marine engineer whose restaurant is spinning up an unconventional version of this quintessentially Greek fast food.

At Alexandratos' fast-food joint, Vegan Beat Athens, in the city's downtown area, gyro — or "space gyro," as they call it here — is the most popular menu item coming out of the kitchen. But you won’t find any spinning stacks of meat around. 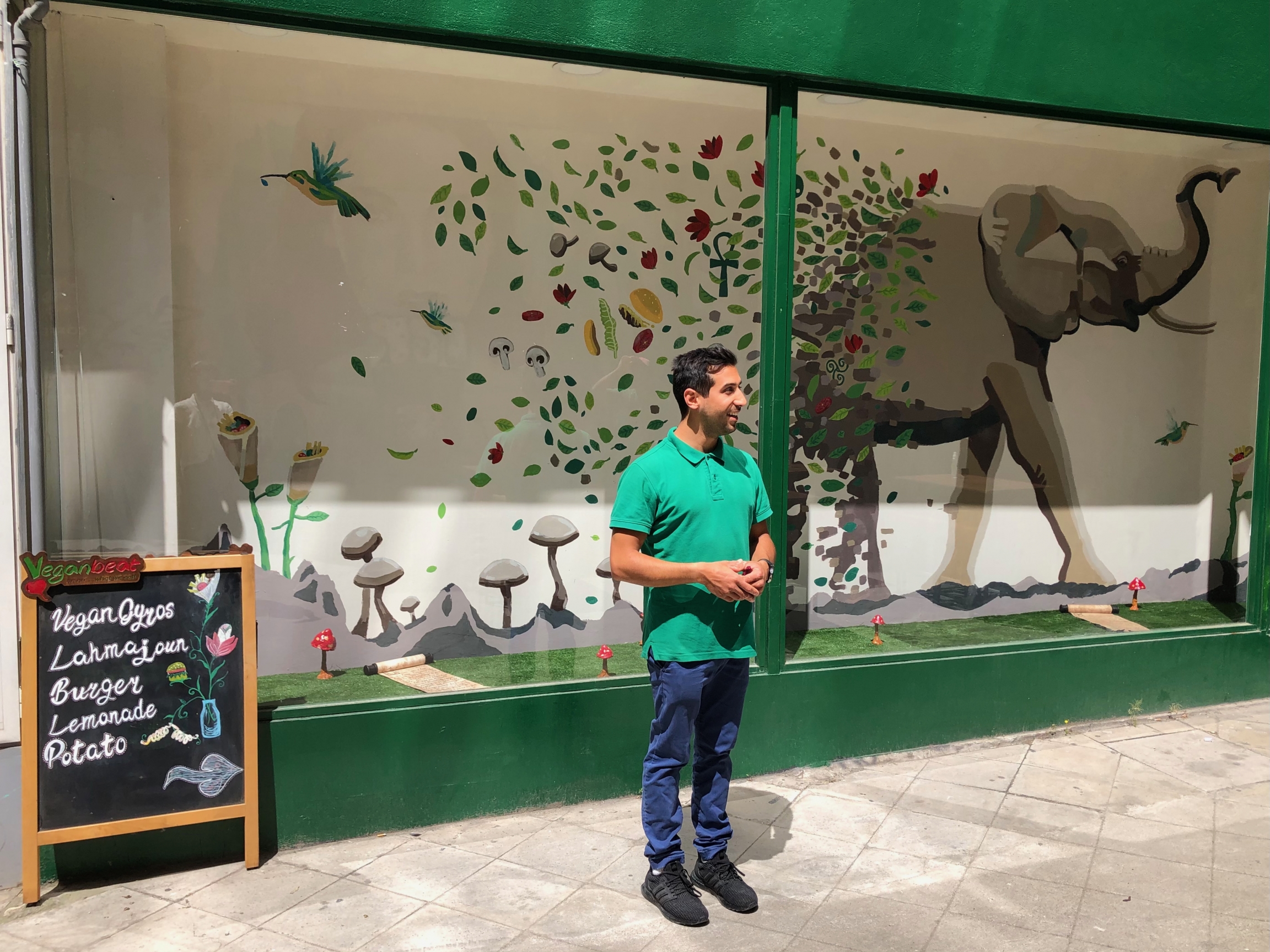 Alexandratos’ joint is vegan and so is the gyro.

Instead of meat, they use mushrooms — “from Greece, of course,” Alexandratos added.

Related: In Greece, thousands of asylum-seekers are waiting for the COVID-19 vaccine

The cooks chop up the mushrooms into thin slices, marinate them in a special spice blend and stick them in the oven. Once the mushrooms are browned up and tender, they stuff them in the pita — and add tomato, onion, greens, vegan tzatziki and mayonnaise.

“And kaboom! You’ve got the perfect vegan gyro,” Alexandratos said.

Alexandratos opened up Vegan Beat Athens a couple of years ago. After going vegan himself, he thought: What’s Athens missing? What’s Greece missing?

“Vegan fast-food businesses … [are places] you can go [if] you don’t eat meat, [and] you want to eat something healthy and fast and tasty.”

“Vegan fast-food businesses … [are places] you can go [if] you don’t eat meat, [and] you want to eat something healthy and fast and tasty,” he said.

Although most of Vegan Beat’s customers are tourists, some Greeks also frequent the spot.

“The gyro is [the] most delicious thing I’ve ever eaten,” said Father Chrisostomos, an Orthodox priest who serves at a church nearby and visits frequently in search of meatless and healthier options.

But in a country that loves its meat, and of course its gyro, there are also some haters. In response to a photo of the space gyro on Facebook, some have left disparaging comments.

“Keep your holier than [thou] attitude out of our gyro shops,” one commenter said.

“Gyro without meat. What’s next? Beer without alcohol?” another added.

Alexandratros laughs off the criticism from gyro purist trolls, but says he understands the hesitation.

Although meat consumption in Greece falls slightly below the European average, and far below the American average, according to the latest data from the UN Food and Agriculture Organization, many Greek dishes and entire holidays revolve around meat. 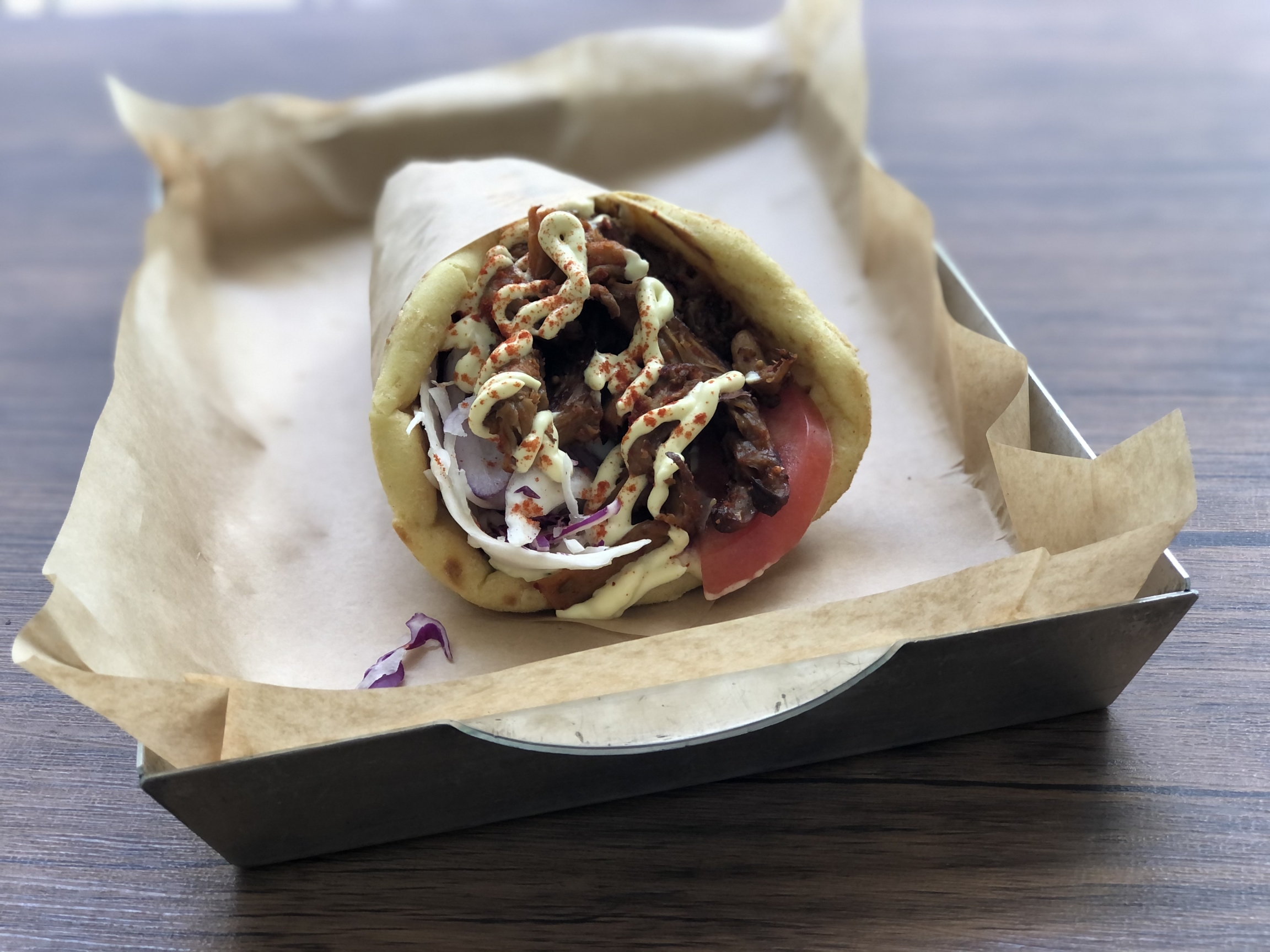 Like in many parts of the world, in Greece, too, meat consumption is often glorified, even fetishized, Alexandratos said.

Alexandratos said he grew up with messaging encouraging him to eat meat, some of which came from abroad.

“In Greece, we watch a lot of US movies. And I remember [the messages I got from them] as a little kid: strong men eat meat. Breakfast: bacon … Fat, juicy steaks — medium to rare. So, this kind of thing also passed to us,” he said.

But Alexandratos is also encouraged to see vegetarian and vegan options in the city and country growing. His restaurant is on a small, but growing, list of places offering vegan gyro.

People in the country, he said, are increasingly realizing the environmental, health and other benefits of turning vegan.

“Things are changing,” he said.