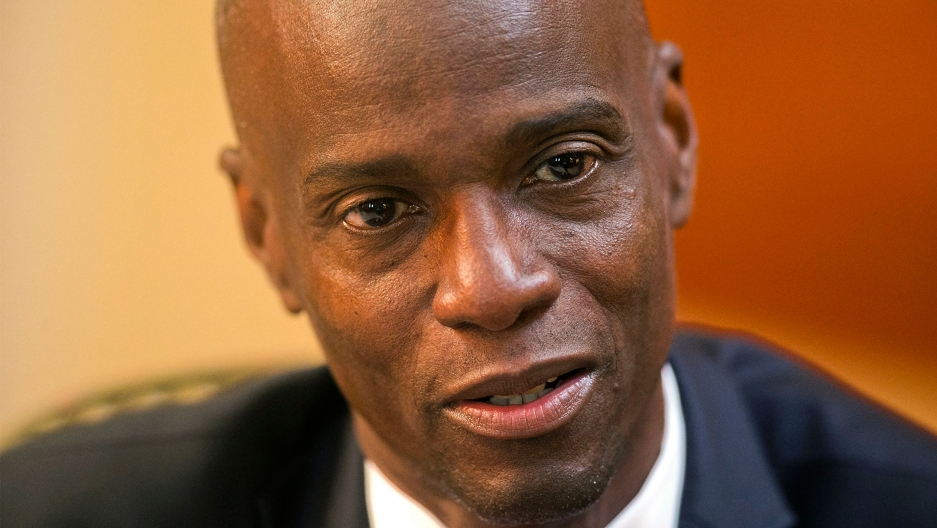 Haiti's President Jovenel Moise speaks during an interview at his home in Petion-Ville, a suburb of Port-au-Prince, Haiti, Feb. 7, 2020.

Gunmen assassinated Haitian President Jovenel Moïse and wounded his wife in their home early Wednesday, inflicting more chaos on the unstable Caribbean country that was already enduring an escalation of gang violence, anti-government protests and a recent surge in coronavirus infections.

Claude Joseph, the interim prime minister, confirmed the killing and said the police and military were in control of security in Haiti, where a history of dictatorship and political upheaval have long stymied the consolidation of democratic rule.

While the streets of the Haitian capital, Port-au-Prince, were quiet Wednesday morning, some people ransacked businesses in one area. Authorities closed the international airport and declared a “state of siege.” The country appeared to be heading for fresh volatility ahead of planned general elections later this year. Moïse, 53, had been ruling by decree for more than a year after the country failed to hold elections, and the opposition demanded he step down in recent months.

Joseph is likely to lead Haiti for now, though that could change in a nation where constitutional provisions have been erratically observed, said Alex Dupuy, a Haiti-born sociologist who teaches at Wesleyan University in the United States.

The best scenario would be for the acting prime minister and opposition parties to come together and hold elections, Dupuy said.

“But, in Haiti, nothing can be taken for granted. It depends how the current balance of forces in Haiti plays out,” said the academic, who described the situation as dangerous and volatile. Haiti's police force is already grappling with a recent spike in violence in Port-au-Prince that has displaced more than 14,700 people, he said.

Former President Michel Martelly, whom Moïse succeeded, said he was praying for first lady Martine Moïse, calling the assassination “a hard blow for our country and for Haitian democracy, which is struggling to find its way.”

Joseph said Martine Moïse, 47, was shot and in a hospital. He condemned the president's killing as a “hateful, inhumane and barbaric act.”

“The country’s security situation is under the control of the National Police of Haiti and the Armed Forces of Haiti," Joseph said in a statement from his office. “Democracy and the republic will win.”

In the statement, Joseph said some of the attackers spoke in Spanish, but offered no further explanation. In later statements, he said that they spoke Spanish or English and were highly trained and heavily armed.

A resident who lives near the president’s home said she heard the attack.

“I thought there was an earthquake, there was so much shooting,” said the woman who spoke on condition of anonymity because she fears for her life. “The president had problems with many people, but this is not how we expected him to die. This is something I wouldn’t wish on any Haitian.”

The US Embassy in Haiti said it was restricting US staff to its compounds and that the embassy would be closed on Wednesday because of ‘’an ongoing security situation.''

The White House described the attack as “horrific” and “tragic” and said it was still gathering information on what happened. President Joe Biden will be briefed later on Wednesday by his national security team, according to spokesperson Jen Psaki.

“The message to the people of Haiti is this is a tragic tragedy,” she said. “And we stand ready and stand by them to provide any assistance that’s needed.”

President Luis Abinader of the Dominican Republic met with his top military and police commanders to discuss plans to reinforce security along the border with Haiti following the assassination.

Moïse was killed a day after he nominated Ariel Henry, a neurosurgeon, as Haiti’s new prime minister. Joseph took over the job of interim prime minister in April following the resignation of the previous premier, Joseph Jouthe.

Haiti's economic, political and social woes have deepened recently, with gang violence spiking heavily in Port-au-Prince, inflation spiraling and food and fuel becoming scarcer at times in a country where 60% of the population makes less than $2 a day. These troubles come as Haiti still tries to recover from the devastating 2010 earthquake and Hurricane Matthew that struck in 2016.

Opposition leaders accused Moïse of seeking to increase his power, including by approving a decree that limited the powers of a court that audits government contracts and another that created an intelligence agency that answers only to the president.

The president faced large protests in recent months that turned violent as opposition leaders and their supporters rejected his plans to hold a constitutional referendum with proposals that would strengthen the presidency.

In recent months, opposition leaders demanded that he step down, arguing that his term legally ended in February 2021. Moïse and supporters maintained that his term began when he took office in early 2017, following a chaotic election that forced the appointment of a provisional president to serve during a year-long gap.