This past spring, Fatih Polat Timur, Istanbul’s municipal director of waterway cleanup, realized he was grappling with an unprecedented outbreak of “sea snot.”

The slimy secretions resemble human mucus and often have a foul smell.

Sea snot results from buildups of phytoplankton, also known as “marine mucilage.” As the sludge floats on the water’s surface, it forms a spongy crust that cuts off oxygen and sunlight to the fish and plants below.

The recent outbreak in Turkey’s Marmara Sea is believed to be the largest on record, worldwide. Since the spring, sea snot buildups have been spotted from Istanbul’s southern coast to as far away as the Greek island of Lemnos.

The Turkish government, fearing a hit to the summer tourist season, went on alert, launching what it called the largest cleanup campaign in the country’s history. 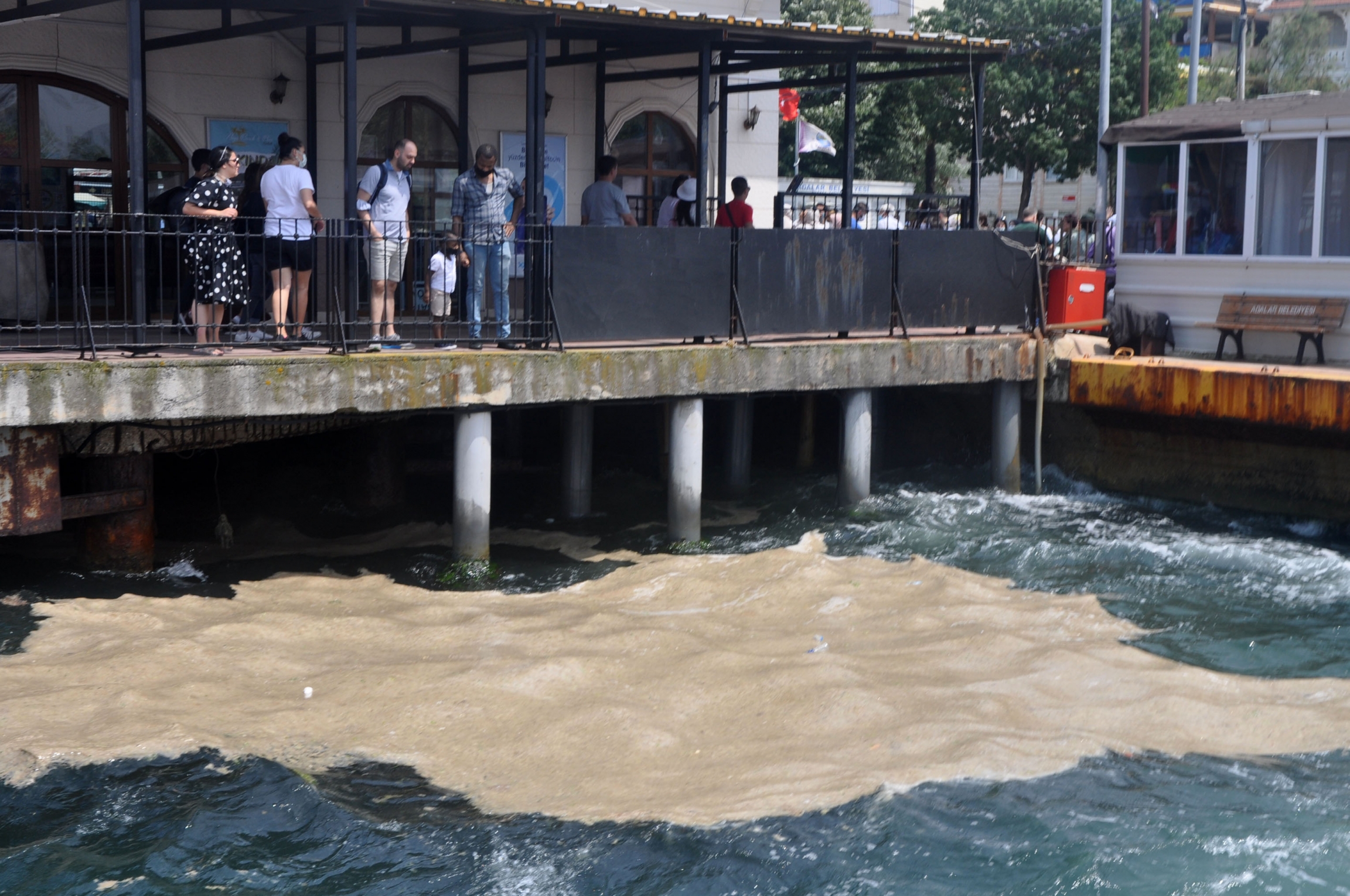 Tourists on Büyükada look at a small patch of sea snot that has been pushed towards the shore.

Some experts say that partially treated wastewater (dumped into the sea), coupled with climate change, is to blame for the outbreak. They warn that action must be taken immediately to curb the problem.

One report by Turkey’s Chamber of Environmental Engineers claimed 70% of wastewater discharged into the Marmara Sea is only pretreated.

That contaminates the water with nutrients like nitrogen and phosphorus, which then leads to more buildups of sea snot, particularly during an unseasonably warm spring. Overfishing has reduced the number of fish keeping plankton levels at bay, says Bayram Ozturk, director of the Turkish Marine Research Foundation.

“We will see more outbreaks of sea snot, all over the world ... there is no magic solution.”

Though the Marmara basin saw a large sea snot outbreak in 2007, this case is “incomparable,” Ozturk said. “We will see more outbreaks of sea snot, all over the world ... there is no magic solution.”

Sucking up the snot

After tinkering with different pieces of equipment in storage, Timur remembered a set of brand new vacuums with long hoses, built to clear out clogged drainpipes.

He was surprised to find that the vacuums can suck up just about anything from the surface of the water.

“I was like oh, thank God,” he laughed in relief. 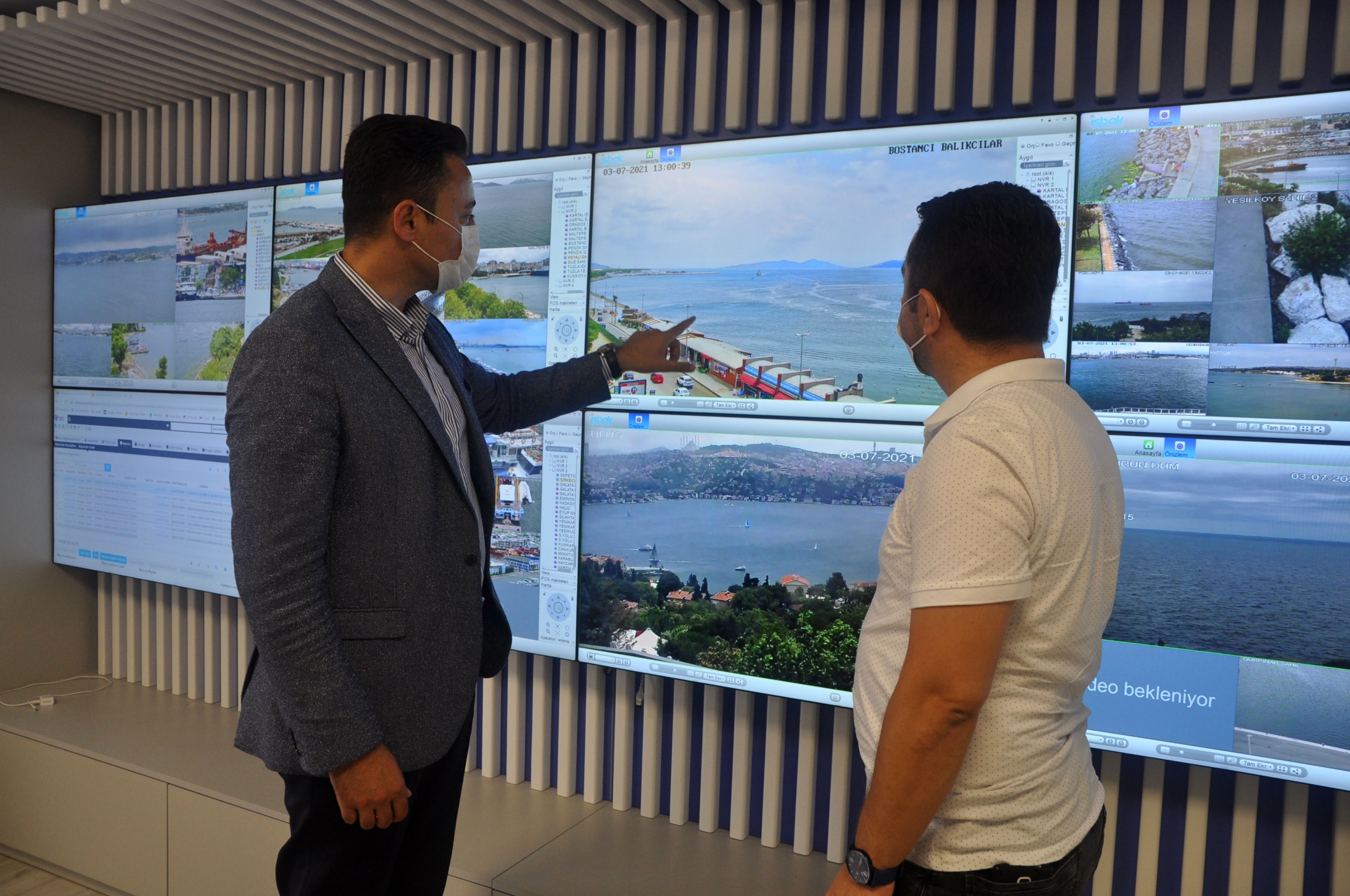 İlker Aslan (left) and Fatih Polat Timur identify a patch of sea snot near the district of Kadiköy, off Istanbul’s beach. The setup of monitors was designed by Timur to monitor litter and other pollutants emitted by ship traffic. Tips are radioed into the Coast Guard, so ships can be fined.

He and his team laid out floating barriers that gather the muck and push it toward the shore. There, they put to work the long-nosed vacuums, sucking up the slime.

Today, most of the surface of the Marmara Sea is fairly clear, following months of cleanup efforts by local authorities.

But, Timur insists, this cleanup is largely cosmetic. The real problem lies below.

Professional divers like Cumhur Ayar have photographed the impact of the outbreak on the seafloor, trying to prove to Turkey’s highest levels of government that they must deal with the source of the problem: untreated wastewater pumped into the sea by hotels, factories and residences.

“The Marmara is deeply sick,” Ayar said. “You could say it’s in a coma.”

In his videos, greenish, hazy plankton obscure the view, as white, billowy threads of sea snot tangle themselves around divers, coral and the seafloor. There are fish, but they move slowly, seeming to struggle.

Ayar’s team has also studied the currents that contribute to these phytoplankton blooms. The Marmara lies between the Black Sea and the Aegean Sea; their opposing currents lie at different depths.

“We’re at the point where we’ve lost the marine ecosystem, especially in the first 30 meters of water,” Ayar said.

“We’re at the point where we’ve lost the marine ecosystem, especially in the first 30 meters of water,” Ayar said.

And this, he added, won’t be fixed until the sea has time to recover. 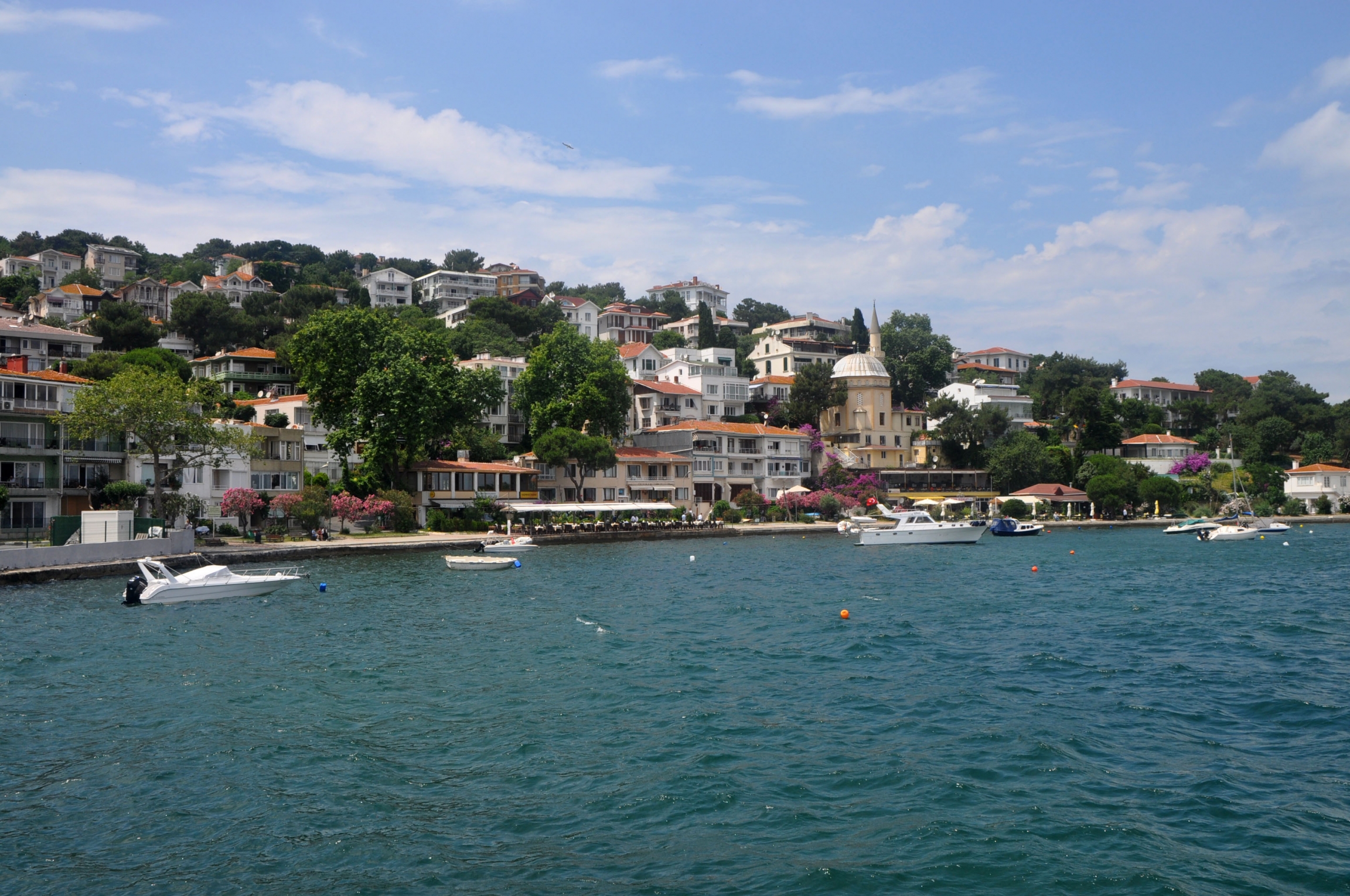 The island of Büyükada in the Marmara Sea, a popular summer destination for Turkish residents and tourists alike. The sea snot outbreak this summer closed beaches for swimming and turned many off from a local specialty, grilled fish.

“If you think of the Marmara as a human body — when a human body is stressed, it starts to sweat. Then it starts to vomit,” said İlker Aslan, the director of marine services for the city of Istanbul. “This is the situation we’re seeing now, the sea is throwing up.”

Aslan said that if a body continues to be stressed, it will die.

The same principle applies to the marine ecosystem — sea snot is actively killing aquatic life, and will likely continue if the outbreak continues unabated.

“This is what we’re trying to avoid,” Aslan said. “This is a big warning for us.”

‘The sea cannot clean itself’

Asutay Akbayır of PADI, the Professional Association of Diving Instructors, has seen this firsthand.

“It’s a chaotic environment because the sea cannot clean itself. The waters of the Marmara are blocked in the middle.”

“It’s a chaotic environment because the sea cannot clean itself,” he said. “The waters of the Marmara are blocked in the middle.” 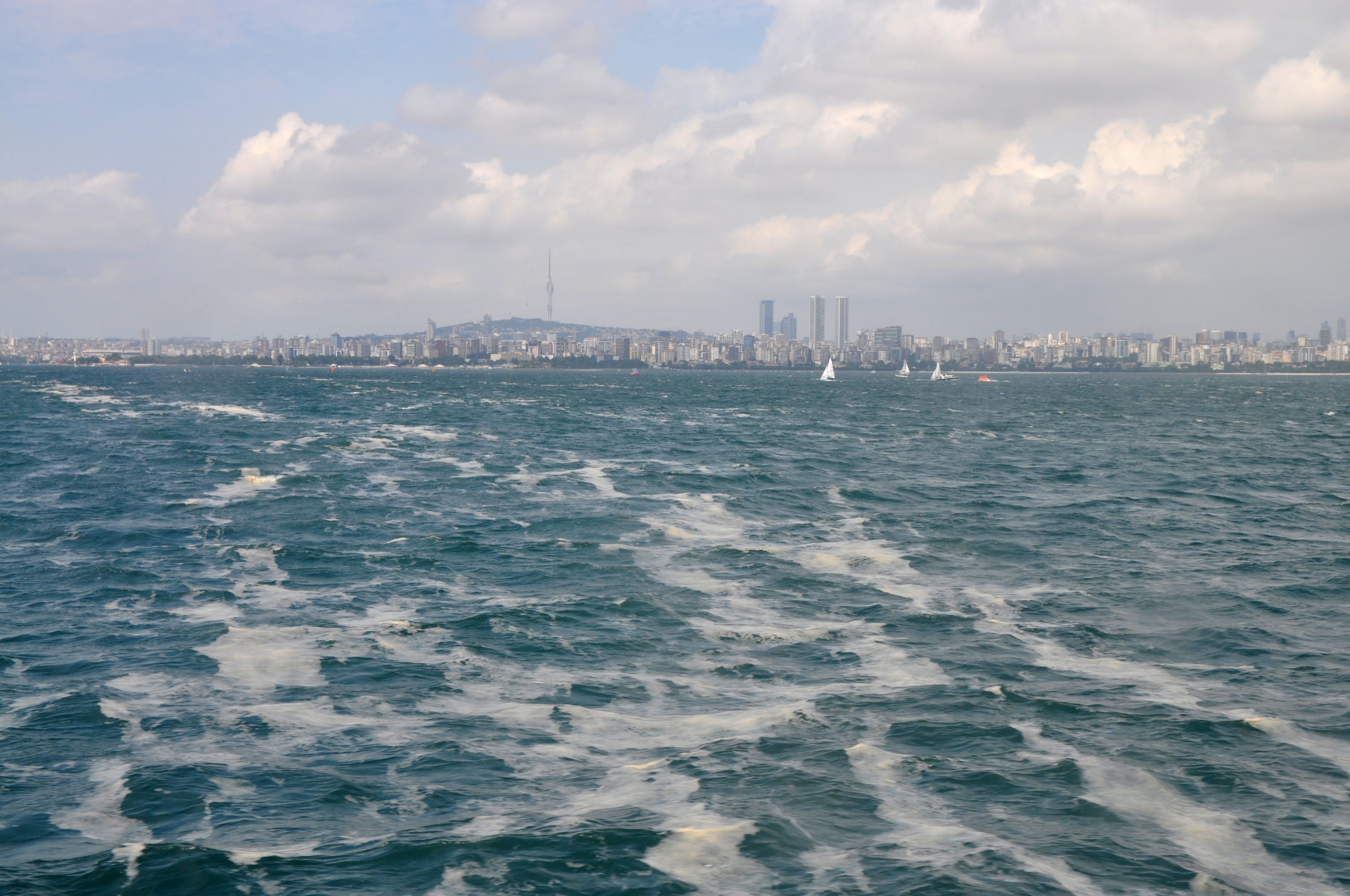 Threads of sea snot, pushed into open waters by the wind, float in front of the Istanbul skyline. Rapid industrialization around the Marmara Sea has led to the increased dumping of untreated wastewater and other pollutants. Blooms of phytoplankton feed on the excess nutrients and buildup, secreting the grayish foam.

Even though the underwater outbreaks of sea snot are a longtime phenomenon, higher temperatures can push the secretions to the top of the sea, Akbayır explained. When winter comes, the foam may disappear, but damaging levels of phytoplankton will remain.

If industrial waste, residential areas and hotel septic systems from the surrounding communities continue to uncontrollably pollute the sea, we can expect to see much more sea snot in our future.

“We’ve been diving for years, we know what’s going on — how the sea changes, how the corals changed, how the sponges died,” Akbayır said. “We’re the only ones who see the reality, and we are a few. You should listen to us.”