Hundreds of women gathered on Istanbul’s Istiklal (Independence) Avenue,  carrying banners, purple flags and signs in support of the Istanbul Convention — an international treaty to prevent violence against women.

Chants and slogans accompanied drums and whistles. The mood was somewhat festive, but the reason for gathering, somber: Turkey has formally withdrawn from the Istanbul Convention as of July 1. 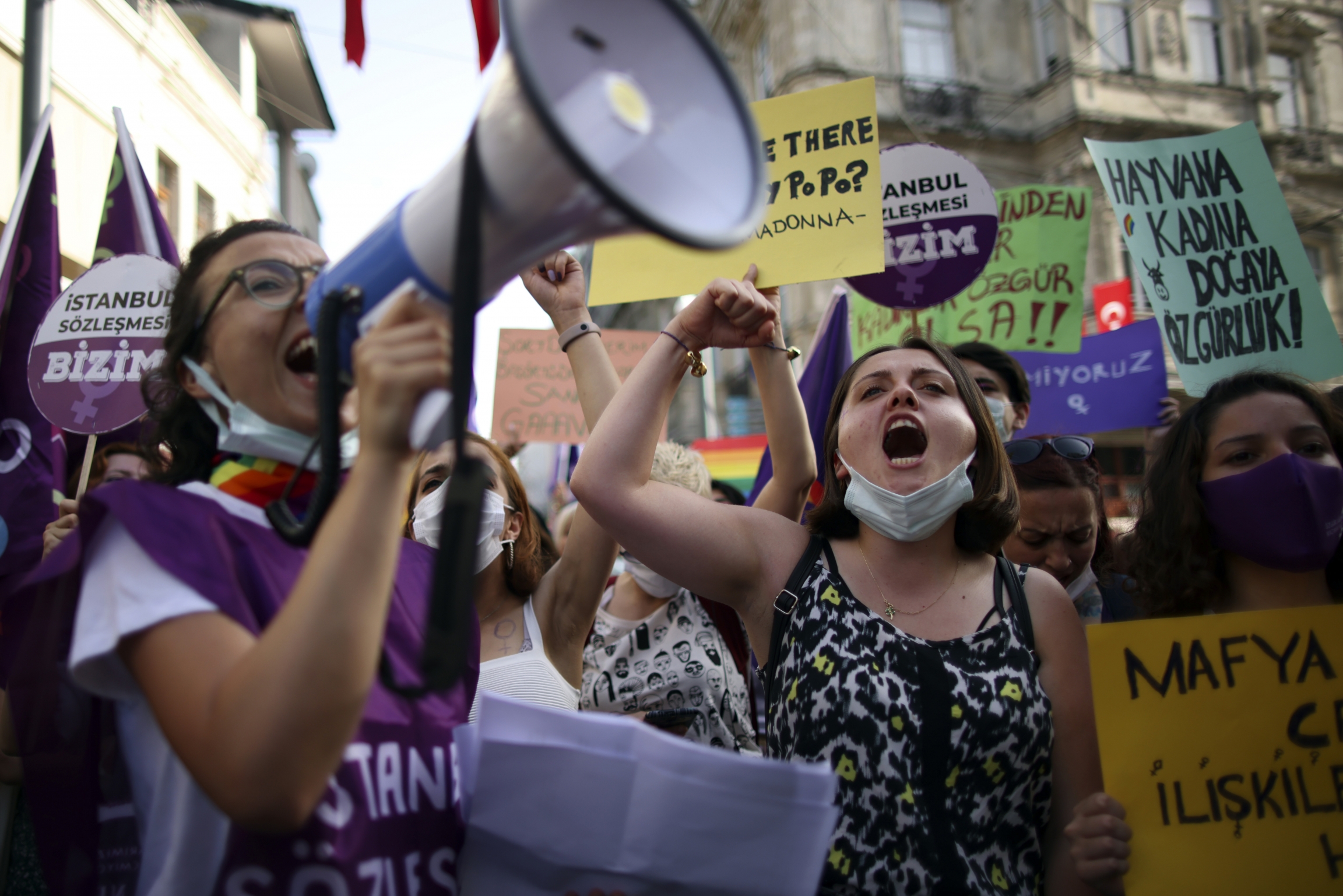 People chant slogans during a protest against the government's decision to withdraw from Istanbul Convention, in Istanbul, Thursday, July 1, 2021.

A few hours later, after several protesters tried to cross a police barricade, Turkish police dispersed the crowd with volleys of tear gas. Some continued to march in nearby neighborhoods. 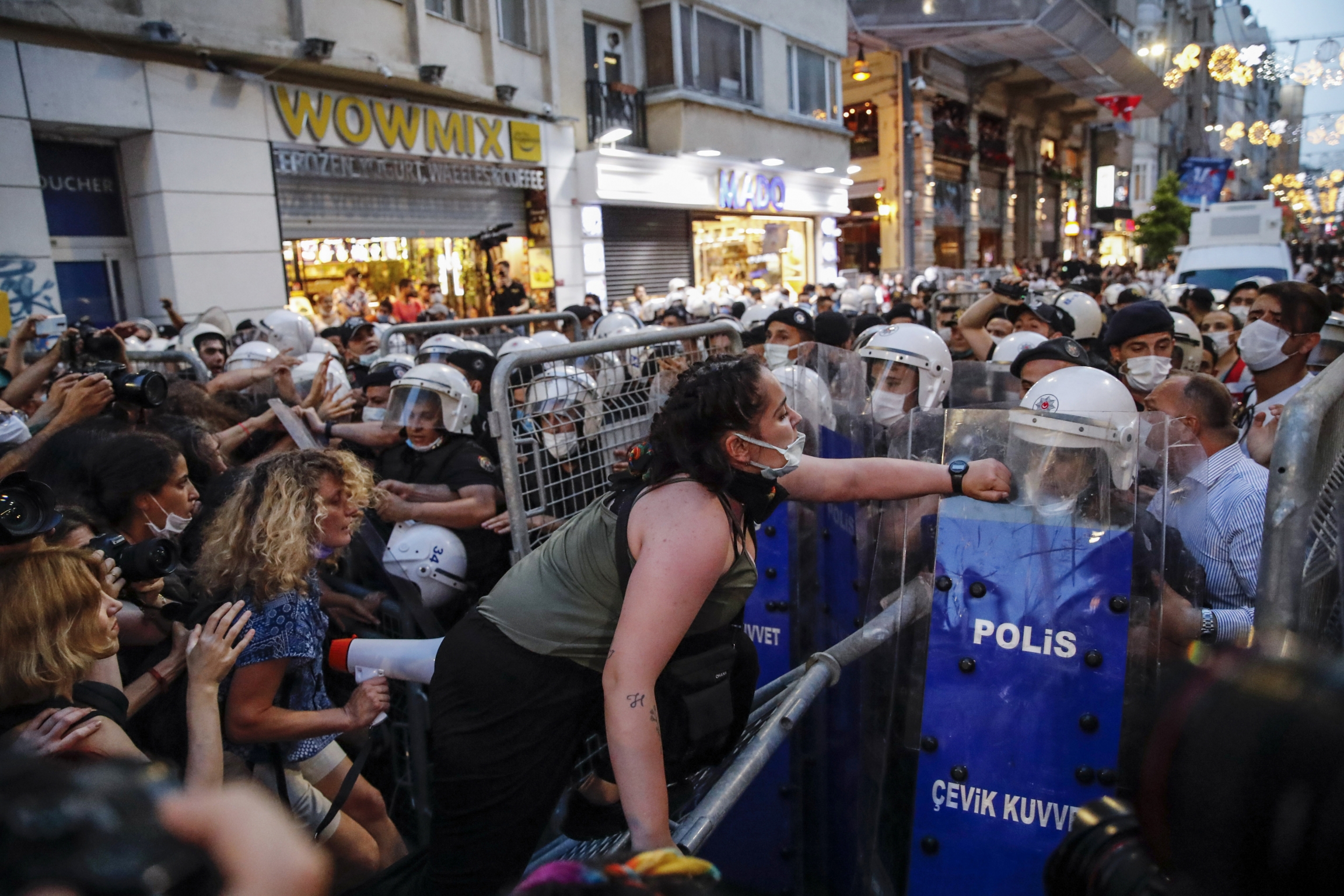 Protesters, left, clash with police officers preventing them from marching against the government's decision to withdraw from Istanbul Convention, in Istanbul, Thursday, July 1, 2021.

The 2011 Council of Europe treaty, originally opened for signature in Istanbul, requires participating governments to prosecute a slew of gender-based crimes, including domestic violence and forced marriage.

Turkish President Recep Tayyip Erdoğan’s decision to withdraw from the treaty — without debate or votes in Parliament — set off months of protests throughout the country.

“The number of femicides have increased since the day they said they would cancel the convention. ... The men who kill women are encouraged by this.”

“The number of femicides have increased since the day they said they would cancel the convention,” hotel worker Sevdi Aycil said. “The men who kill women are encouraged by this.”

Women’s rights activists in Turkey say the country is rife with intimate partner violence that goes unpunished. The We Will Stop Femicide Platform has documented 189 killings of women since the beginning of the year — many of them by boyfriends, former partners or family members.

In March, Erdoğan’s conservative government defended the decision to leave, by claiming that the document had been “hijacked by group of people attempting to normalize homosexuality, which is incompatible with Turkey’s social and family values.”

In a speech on the day of Turkey’s removal from the international agreement, Erdoğan outlined his own plan to prevent violence against women — which largely focused on raising awareness.

“The fight against violence against women is also the struggle to protect the rights, law and honor of our mother, wife and daughter,” Erdoğan said. “Each of whom is a part of our lives.”

Poland’s right-wing government, which is closely aligned with the Catholic Church, has also signaled an intention to leave the agreement, citing objections to the treaty’s “ideological nature.” A bill called “Yes to Family, No to Gender,” winds its way through the country’s Parliament.

The Turkish government’s rationale for exiting the Istanbul Convention — that it normalizes homosexuality — is part of what activists say is a growing effort on the part of the government to marginalize the LGBTQ community.

Protesters carrying rainbow flags or pro-LGBTQ signage are often forbidden from entering gatherings, or targeted by police for arrest.

“Why is it a crime to carry an LGBTI flag, it doesn’t make any sense. ... Being gay or lesbian or trans[gender], it isn’t a crime in Turkey. It’s not like Iran.”

“Why is it a crime to carry an LGBTI flag, it doesn’t make any sense,” said Burcu Karakaş, a Turkish journalist who covers the feminist movement. “Being gay or lesbian or trans[gender], it isn’t a crime in Turkey. It’s not like Iran.”

Related: An annual pageant is the one night a year trans women in Turkey can celebrate 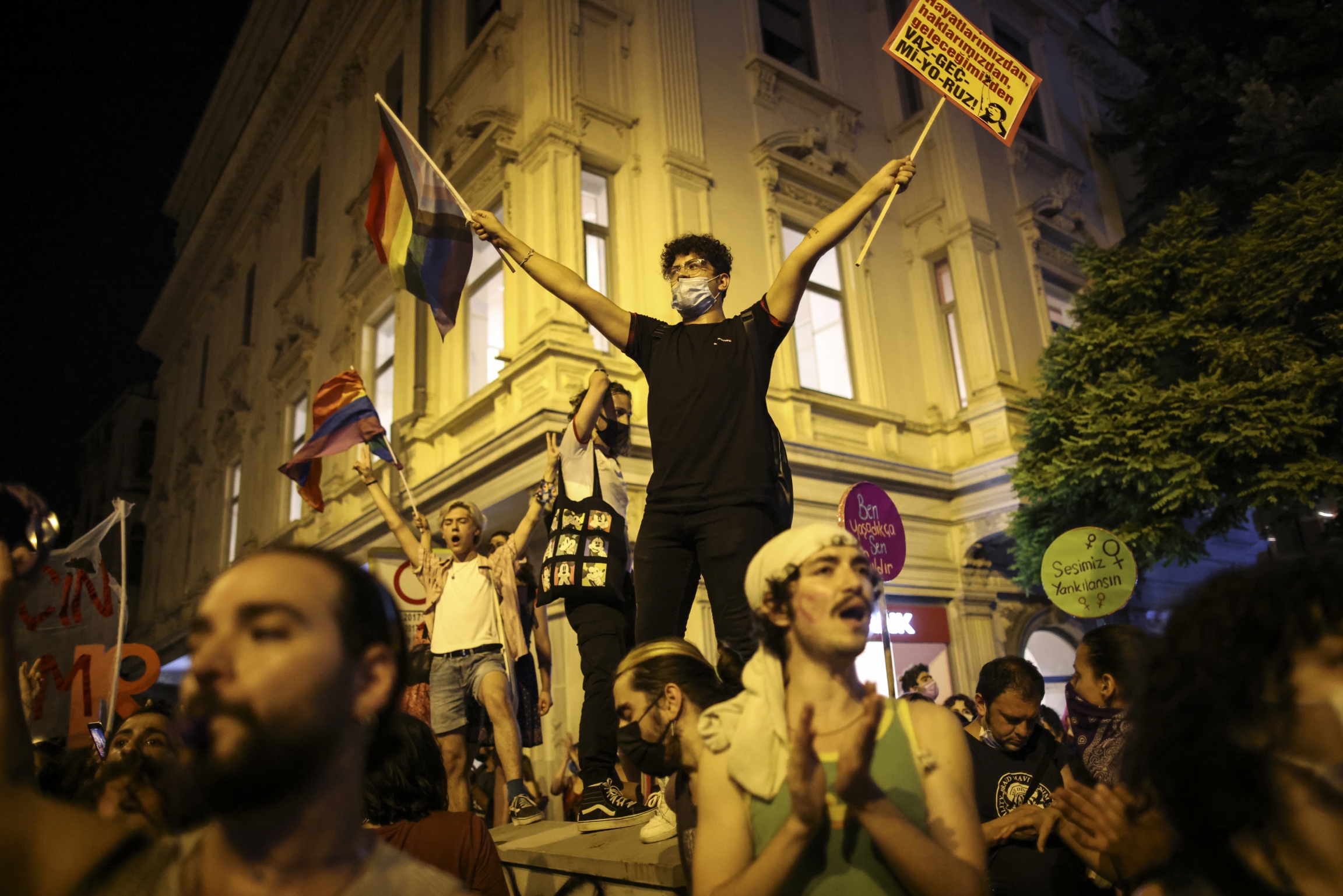 People chant slogans during a protest against the government's decision to withdraw from Istanbul Convention, in Istanbul, Thursday, July 1, 2021.

Government officials and loyalist media repeat these messages, Tar said. Even the head of Turkey’s directorate of religious affairs claimed last summer in a Ramadan sermon that homosexuality was to blame for the COVID-19 pandemic.

In some cases, these words translate to very real violence. According to Tar, hate crimes against members of the LGBTQ community are up in Turkey — with increasing impunity.

“Hate crimes are happening in public places, and there were eyewitnesses. ... Half of them remained silent. A quarter of them joined the attackers.”

“Hate crimes are happening in public places, and there were eyewitnesses,” Tar said. “Half of them remained silent. A quarter of them joined the attackers.”

But Tar remains hopeful and thinks Turkey’s population is more open-minded than its government. In Tar’s outreach work in recent years, even conservative, Muslim communities who often oppose homosexuality on religious grounds, welcomed Tar into their spaces. Some even requested Tar to share presentations in the evening, after Friday prayers, so they could join.

“It’s not about LGBT vs. religion in society,” Tar said. “In society, there’s a change. I think the government is trying to reverse that change — but that’s a hopeless effort.”

In June, local authorities banned Pride events and arrested dozens in unauthorized gatherings throughout the country.

When 22-year-old Lizge Biter tried to attend a small march in one Istanbul neighborhood, the group was tear gassed and 25 people were arrested, including an AFP photographer.

As recently as 2014, tens of thousands of people attended a Pride march down Istanbul’s longest pedestrian thoroughfare — the largest in the Muslim world. Today, that feels like a distant reality.

“The government is starting to attack [LGBTQ communities] more than usual. ... It was always unsafe, but it’s becoming more [visible].”

“The government is starting to attack more than usual,” Biter said. “It was always unsafe, but it’s becoming more [visible].”