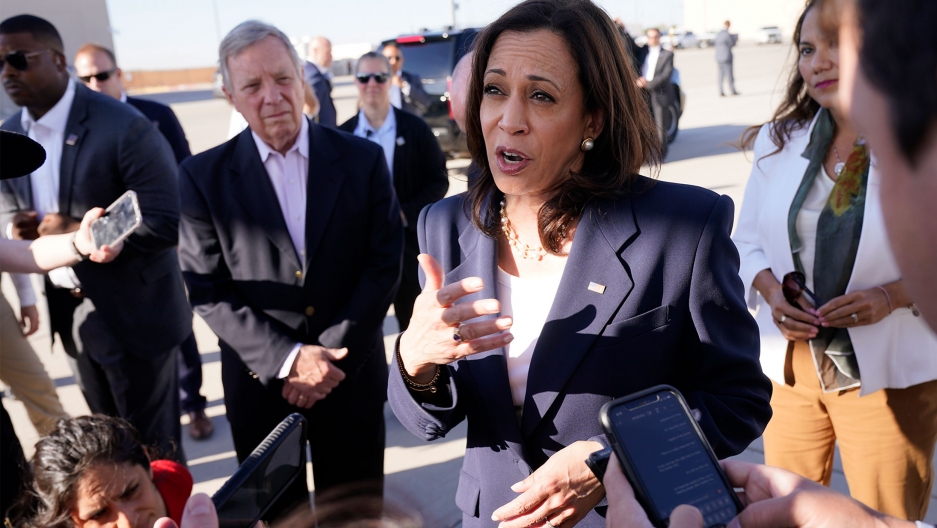 Vice President Kamala Harris talks to the media after stepping off Air Force Two, on arrival to El Paso, Texas, June 25, 2021. Harris will visit the US southern border as part of her role leading the Biden administration's response to a steep increase in migration.

Vice President Kamala Harris visited the US border with Mexico on Friday. While in El Paso, Texas, Harris called the situation at the border “tough” and said more work is needed, but anchored in a thorough understanding of why migrants leave their homes.

She also met with five young girls, ages 9-16, who had been held at a Customs and Border Protection processing center after crossing the border, the White House said, before visiting the border itself at the Paso del Norte Port of Entry.

Thus far, much of Harris' attention has been devoted to what she calls the “root causes” of migration, namely poverty, crime and corruption in Central America.

“The stories that I heard today reinforce the nature of those root causes,” she said, adding, “It is going to require, as we have been doing, a comprehensive approach that acknowledges each piece of this."

Related: A new generation of DACA youth depends on Biden for support

During a meeting with faith-based organizations, as well as shelter and legal service providers, Harris said she and Biden “inherited a tough situation.'”

The vice president has faced increasing criticism from members of both parties for deferring the trip until now, and for her muddied explanations as to why.

“It was always the plan to come here, and I think we’re gonna have a good productive day,” Harris said after arriving into El Paso.

Republicans have seized on the absence of both Harris and President Joe Biden from the border to paint the administration as weak on border security, seeking to revive a potent political weapon against Democrats for the 2022 midterm elections. With former President Donald Trump visiting the area less than a week after Harris, Republicans will be watching the vice president's visit closely for fodder that they can then use in political attacks.

Other administration officials have made multiple visits to the border, but the absence of Biden and Harris has left some Democrats worried that damage has already been done. There's concern that the Biden administration has ceded the border security debate to Republicans.

“The administration is making Democrats look weak,” said Texas Democratic Rep. Henry Cuellar. “I’ve heard, from Democrats and Republicans in my area, 'what the heck is going on with this administration?'”

Cuellar’s district spans from south of San Antonio to the US-Mexico border, and last year, he won reelection by the slimmest margin of his nearly two-decade-long career. While he says he’s not worried about his own reelection, he adds, “I worry about my colleagues.”

Biden’s first few months in office have seen record numbers of migrants attempting to cross the border. US Customs and Border Protection recorded more than 180,000 encounters on the Mexican border in May, the most since March of last year. The numbers were boosted by a coronavirus pandemic-related ban on seeking asylum, which encouraged repeated attempts to cross, because getting caught carried no legal consequences.

Republicans have seized on those figures to attack Biden and Harris as weak on border security, a message the GOP used with success during the 2020 campaign.

Administration officials, including Harris, have sought to refute the charge, with Harris repeatedly sending the message to migrants during her recent visit to Guatemala: “Do not come.”

But those comments drew fire from some progressives, most notably New York Rep. Alexandria Ocasio Cortez, who called the message “disappointing.”

It was an incident that underscored the political no-win situation for Harris, taking on an intractable problem that’s bedeviled past administrations, and been used by both parties to drive wedges and turnout during campaign season. If Biden chooses not to run for a second term, Harris will be seen as the leading contender to replace him, and the immigration issue could become either a chance to showcase her accomplishments or an albatross.

Indeed, Republicans preemptively hammered Harris over her border visit, with Trump claiming credit for her decision to go.

Harris' advisers have been careful to emphasize that her main focus is addressing the root causes of migration. She has been seeking economic and humanitarian solutions to improve conditions for residents of Central and North American countries who flee to the US. Her aides framed her trip to the border as part of an effort to better understand how to solve the problem.

Harris was being joined on the trip by Homeland Security Secretary Alejandro Mayorkas, Illinois Democratic Sen. Dick Durbin and Democratic Rep. Veronica Escobar, who represents the district there.

Mayorkas said the US faced “significant challenges” back in March in securing the border, but said “we’ve made extraordinary progress.”

Harris had no plans to visit the migrant detention facility at the Fort Bliss military post, which has drawn criticism from advocates who have described unsafe conditions and allegations of abuse toward some of the thousands of children housed there. Instead, Health and Human Services Secretary Xavier Becerra was set to travel there on Monday.

Related: 'I want to send more money home’: Remittances are a sign of sacrifice, resilience in immigrant communities during pandemic

Democratic Rep. Cuellar called the decision by Harris to visit El Paso “politically safe,” because, he said, most of the activity at the border happens farther south.

White House press secretary Jen Psaki said Harris chose El Paso because of that's where Trump announced some of his controversial immigration policies that Biden sought to roll back.

“It's a place that has a little bit of historic connection in that regard and it's an opportunity to draw a bit of a contrast with what we're trying to accomplish," she said.

Nonetheless, the head of a major Latino civil rights group expressed concerns that Harris' visit was “a day late and a dollar short.”

“It almost feels like they’re being kind of forced into it by the local communities, as well as the Republicans’ political attacks from the right," said Domingo Garcia, president of the League of United Latin American Citizens.

Still, Garcia also expressed optimism that her visit could help the Biden administration shift on immigration and show a contrast to Trump’s hardline stance.

“They should own this, and they should solve it, because it does need a bipartisan solution,” he said.