The president of the Inter-American Commission on Human Rights, Antonia Urrejola, told the Organization of American States this week that Nicaragua had entered a new phase of repression, with at least 20 opposition figures arrested in recent weeks and “constant human rights violations.”

Molina fled Nicaragua on Christmas Day 2018, during a government crackdown on the press.

Molina joined The World's Carol Hills to talk about his work and the struggle for fair elections in Nicaragua.

Carol Hills: Pedro, my first question is whether Confidencial is still publishing? I read a few days ago that the editor of Confidencial, Carlos Fernando Chamorro, has fled Nicaragua. Are you still able to post your cartoons?

Pedro X. Molina: Yeah, we are still working. You know, Confidencial newsroom has been raided by the police twice now. But, there is a new crackdown on journalists going on right now in Nicaragua. So he had to leave. So, he's outside of Nicaragua again. But we keep working. 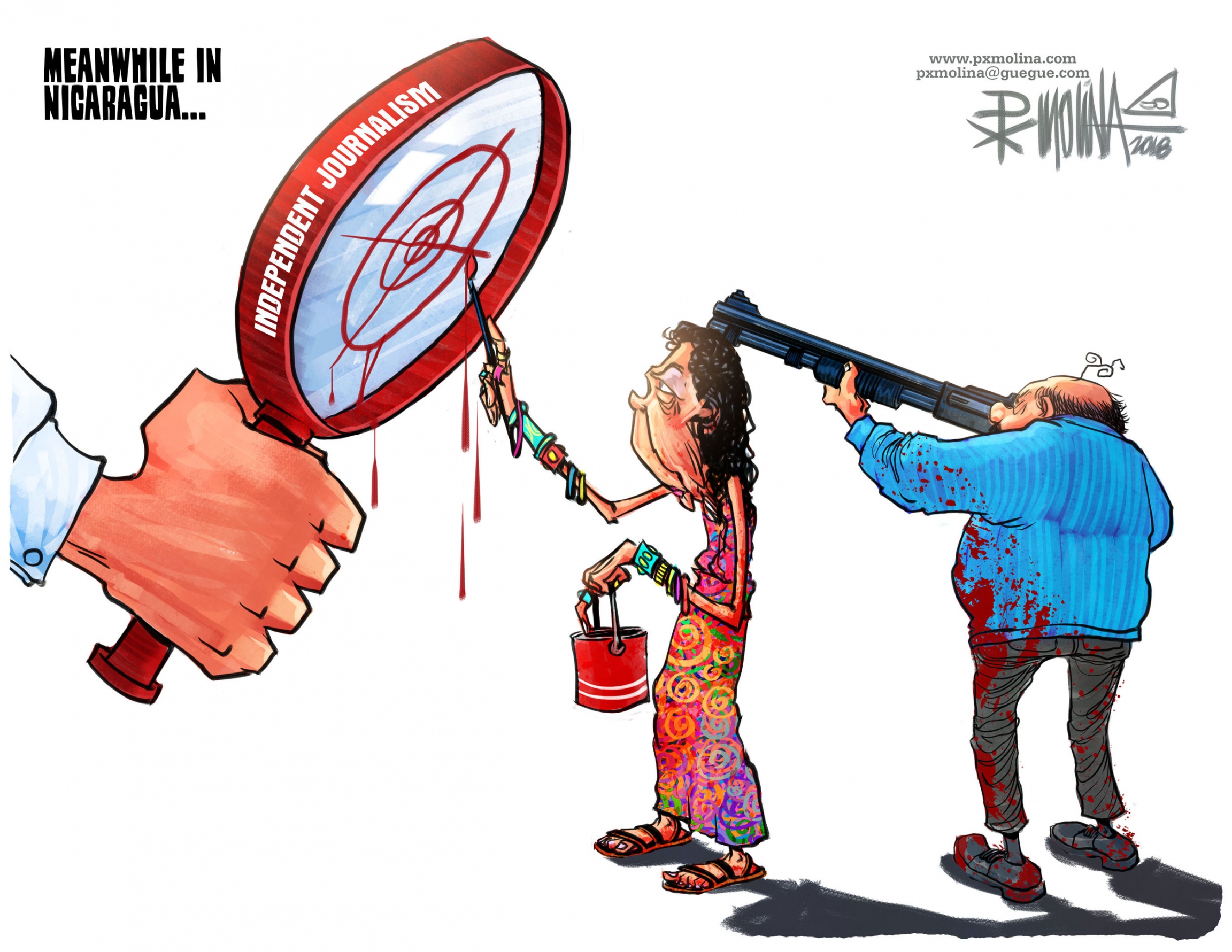 A comment on the crackdown on journalism by Nicaraguan President Daniel Ortega and his wife Rosaria Murillo, who is also vice president of the country.

So basically, Confidencial is running from exile?

Yeah, in some part, yeah. We still have a few journalists working inside Nicaragua, you know, working as reporters. But yeah, it's a mixed operation. Some of us are outside and there are still a few of us inside Nicaragua. 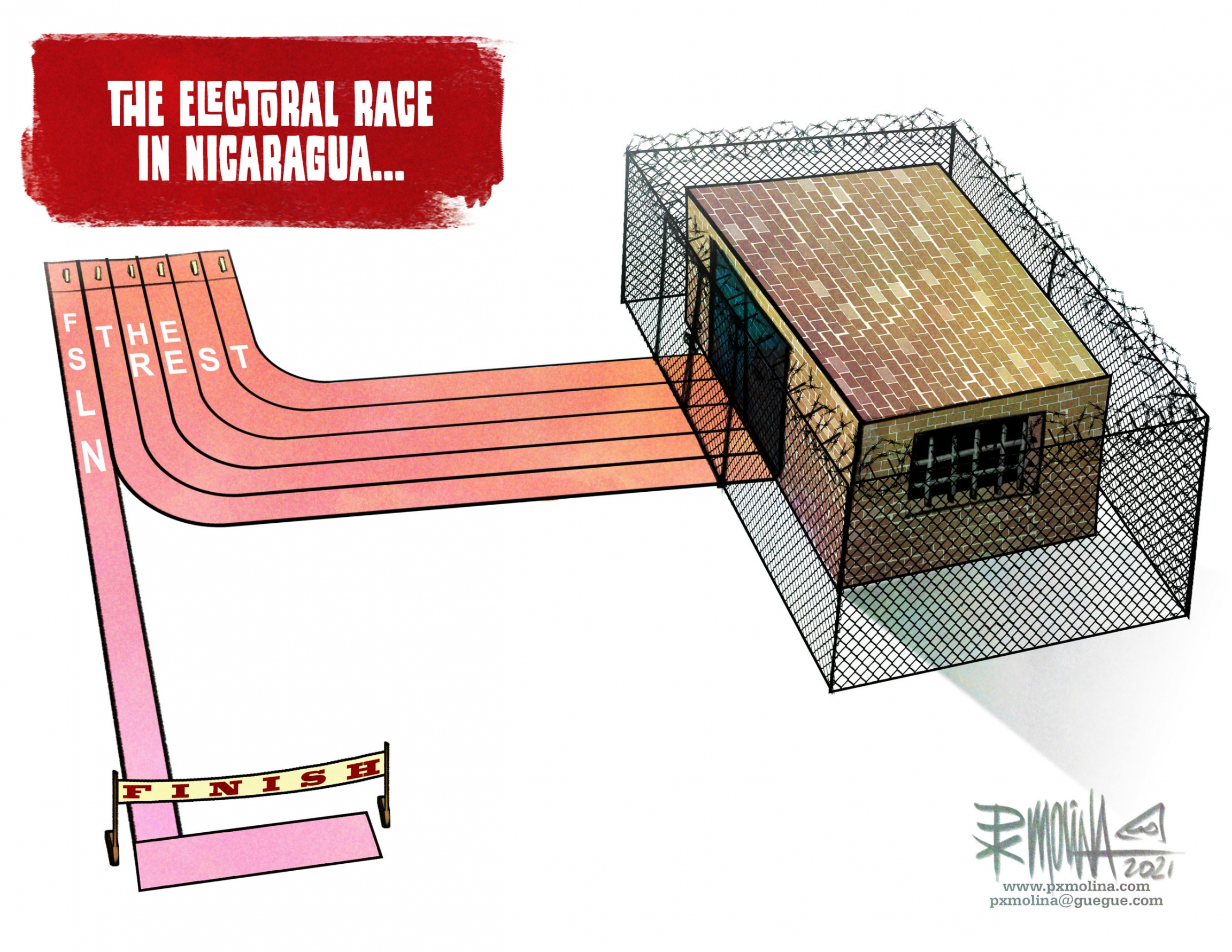 This cartoon is a comment on the number of presidential candidates running against Nicaraguan President Daniel Ortega who have been detained in recent months.

What have been your reactions to the news in recent weeks and months about the detentions of politicians, business people, people who are planning to run against Daniel Ortega in November?

Well, as a citizen of Nicaragua, this is very, very sad, because repression just keeps getting worse and worse. And this is something that has been going on since 2018. And we are desperate. We are trying to do the best we can in the way that we are still able to do it. But, we do need the attention and the help of the world. Why? Because the government, the dictatorship, has this feeling that they can do whatever they want and nothing will happen to them. They are not paying any cost for this, and they have to be held responsible for what they are doing to the Nicaraguan people. 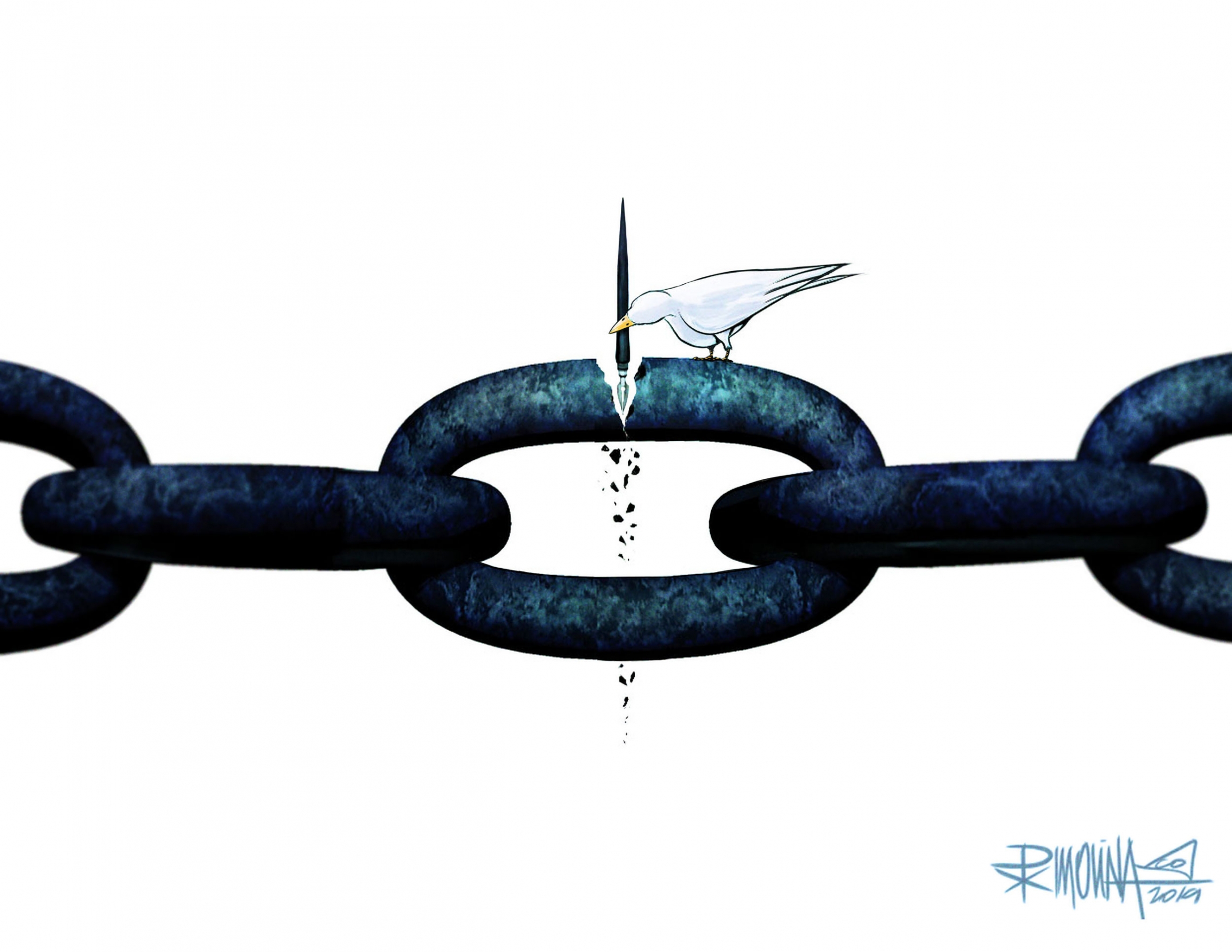 A comment on freedom of the press in Nicaragua and how it's necessary to fight political oppression.

It seems like the world is starting to take notice. Several human rights groups are condemning the arbitrary arrests. What do you want from the international community? What sort of help do you think Nicaragua needs?

You know, back in 2018, when they were also paying attention to what was happening in Nicaragua. And at that time, the people were on the streets protesting — even when they were killing people every day in all the protests. The snipers of the dictatorship were killing people and people were still protesting. So, the message for the international community was, 'well, we are listening. But you have, you know, to calm down, we are going to open a dialog with the government and we are going to try to solve this.' So, people listen, and the dialog didn't go anywhere, because the dictatorship, they sign everything they ask them to. But once everything was a little more calm, they went after everybody again and they started putting people in jail again. So the international community say, OK, let's guarantee that by 2021 we are going to try to fix this problem through the election and we are going to put pressure on the government to get a fair election. And that is not happening now either. So basically what people in Nicaragua are needing, is a way to solve this in a peaceful way, which is the elections. But there is no way that we are going to have fair elections if there is not enough pressure from inside the country, which is very hard to get right now, because people are being put in jail just by waving the national flag. But also the pressure that can come from outside Nicaragua, which is very important. 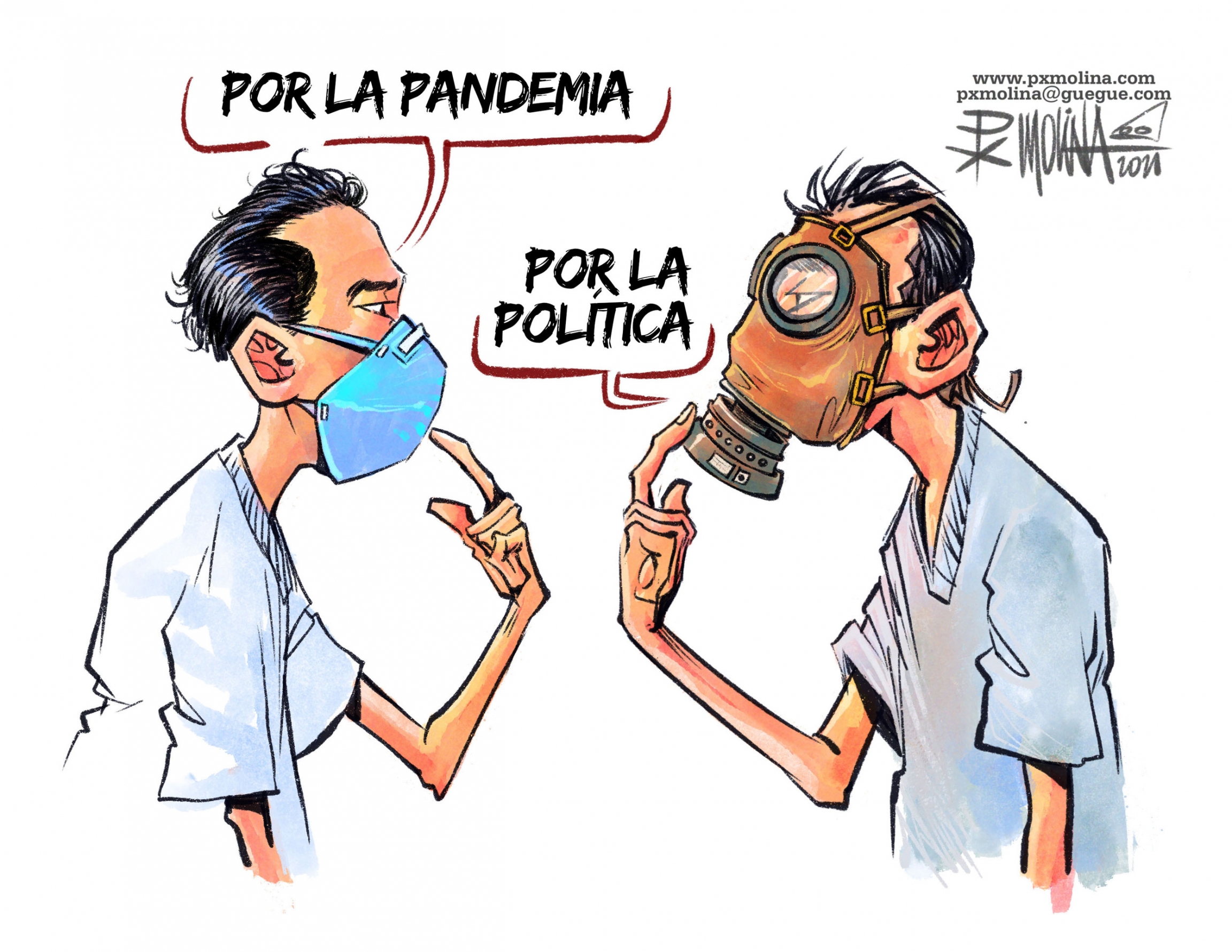 I want to move to what you do to express your opposition, which is cartooning. You're in exile, but you're still drawing. How effective do you feel you can be in calling attention to the repression of Daniel Ortega as a political cartoonist? What are you able to do?

Well, I am doing what I have been doing all my life, which is doing cartoons and giving my opinion about things that happened in my country. Inside Nicaragua, the kind of stuff that I do as a cartoonist, I do know that people care about it, they feel inspired by it, they are informed by it. We have to remember that in Nicaragua, the most prominent media outlets — the traditional ones — were all bought by the Ortega family. And each of their sons run one of these huge media outlets: TV stations, radio stations and all that kind of stuff. So in order to inform themselves, people have to have moved to the web to read independent journalism and follow independent journalists. Because there is no other place to find out what is happening. So it is very important what we do. 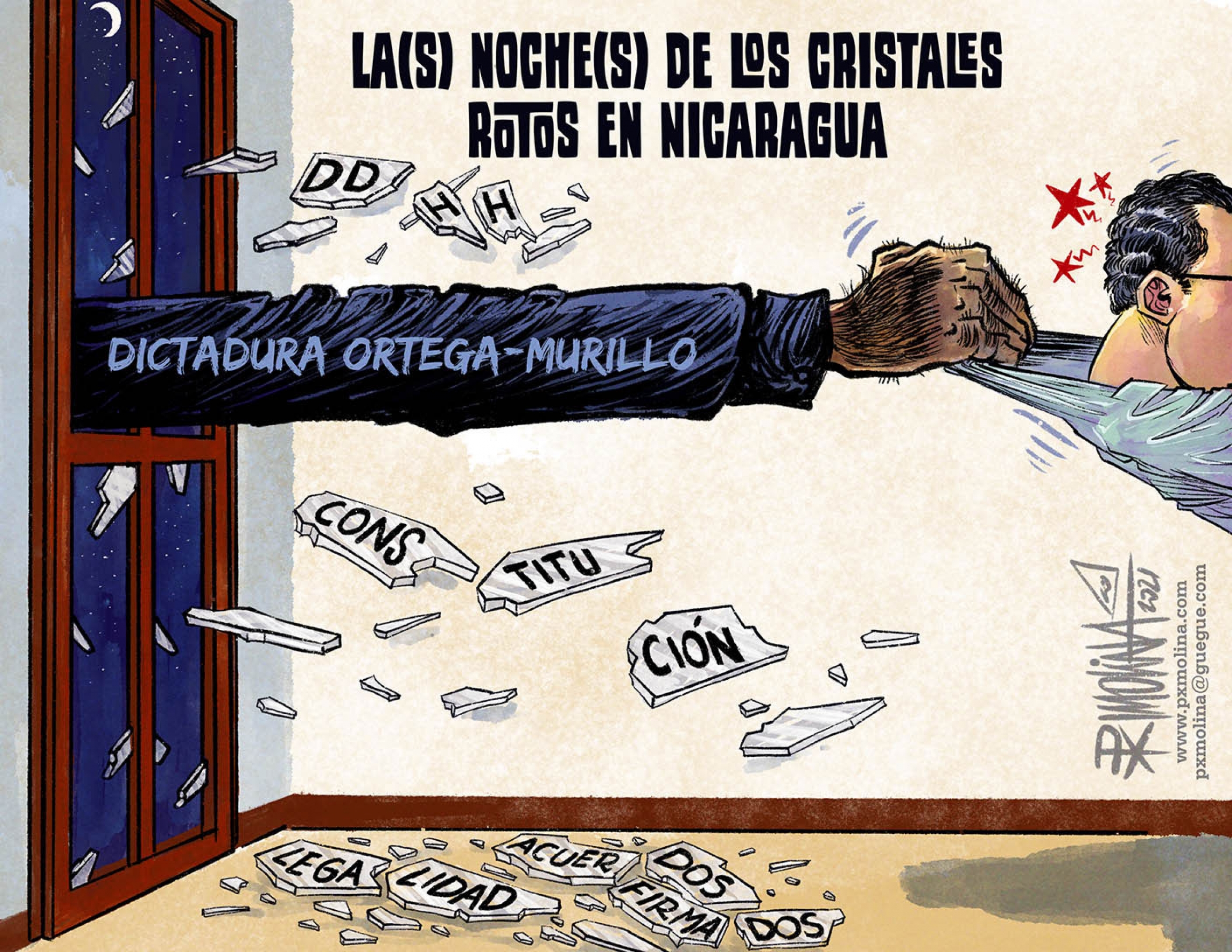 Kristallnacht in Nicaragua, a reference to the current crackdown on the press in Nicaragua. It was drawn yesterday, June 23, 2021.

Pedro, describe your latest cartoon for a Confidencial.

Well, the one that I published today is about these riots that the dictatorship is running against the journalist. You know how they are coming in, always in the night, inside their houses and taking them to nobody, knows where. Because, we assume that they are put in jail, but we don't even know how they are and where they are. Because they are not allowing family to see them. They are not giving information about their well-being. So they are technically being kidnaped. My cartoon today is about that, about how the dictatorship doesn't care anymore, about basic human rights, about the Constitution, about at least trying to sell the idea of some legal proceeding. They don't care about that anymore. So that's what my cartoon is about today. 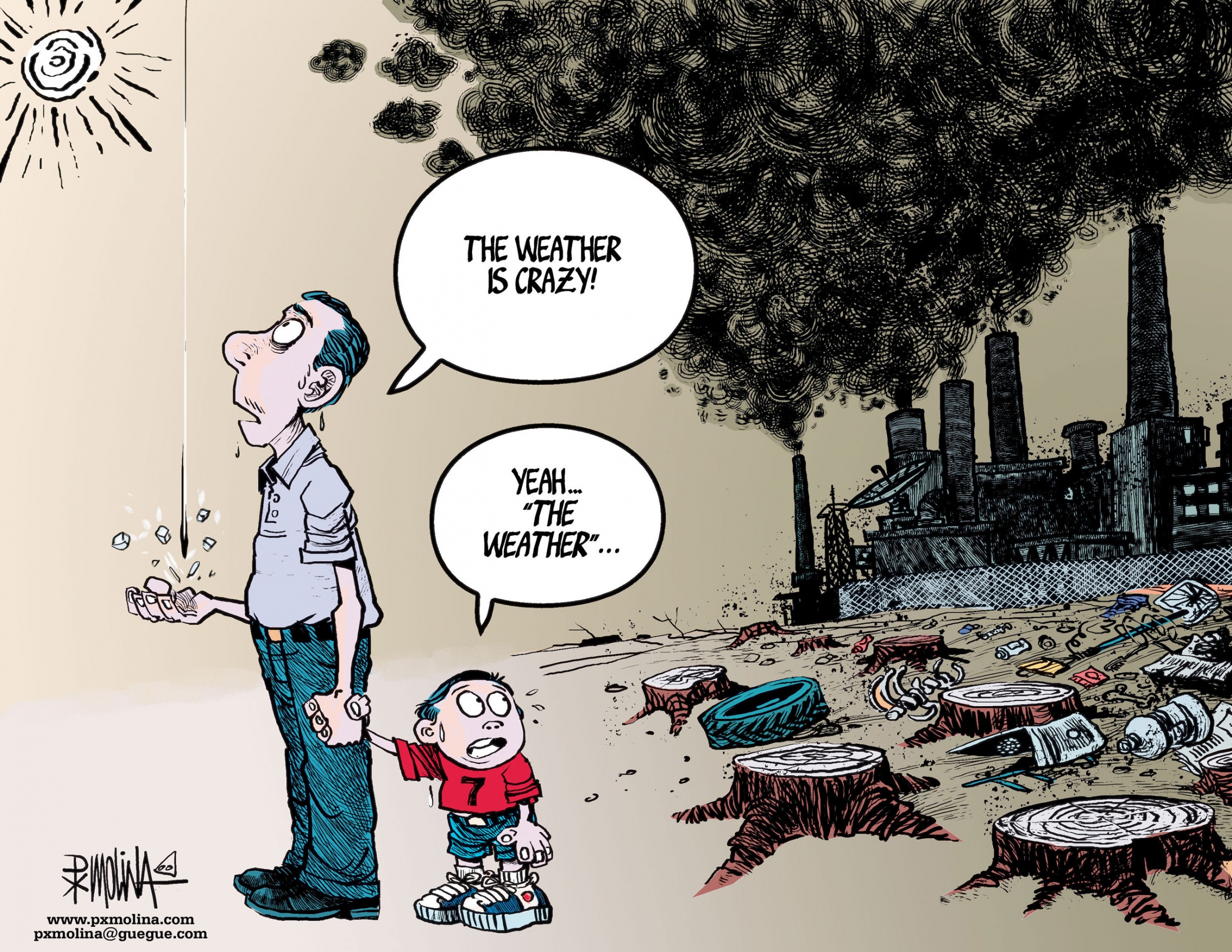 Pedro, what would you like the Biden administration to do about the situation in Nicaragua? What sort of role do you think the US can play? It's always a touchy subject.

Yeah, it's always a touchy subject. But because we have the most important part to play as Nicaraguans. It's our country. It's up to us to decide the future of our country. But we do need the Biden administration. And I will say European Union leadership also. And everybody in the world to help us get, at least the basic frame to achieve that. Which is once again, the chance to have fair elections. That's what people are asking. We are not asking for anything else but the chance to have a fair election. Because we do know that if we get that, we can kick this dictatorship out without violence. And that's what Nicaraguan people want. Because we are tired of these cycles of revolutions and violence in our country. That hasn't solved any of our problems. You know, the problem is that we can't accept as fair elections what the dictator is trying to say right now as the election in November, which is not going to be an election unless there is enough national and international pressure to get that.

This transcript has been lightly edited for clarity. AP contributed to this report.