Inside a Mexican-themed nightclub called Plaza MX, in Bogotá, Colombia, dozens of people sing along with a Mariachi band performing on a brightly lit stage.

Transparent plastic sheets divide the tables, but other than that, it's business as usual as young people dance and mingle. Some even drink out of the same tequila bottles.

The nightclub was forced to shut down for several months last year due to the COVID-19 pandemic, and then it reopened as a restaurant only.

Now, like the US and Europe, Colombia is lifting most restrictions in a bid to bring back jobs — even as COVID-19 death rates climb. 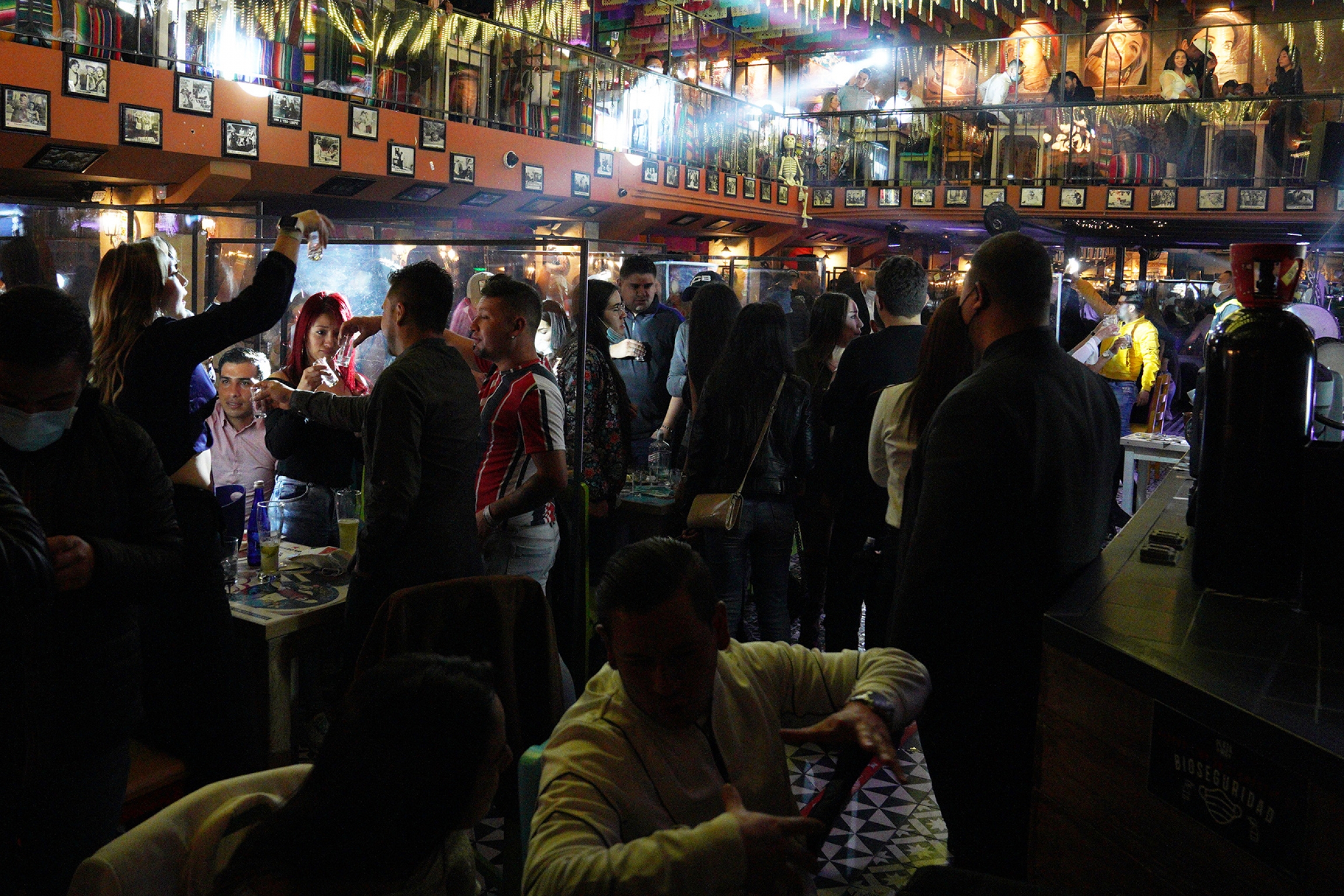 For nightclubs like Plaza MX, being able to open until late at night makes the difference between making profits or operating at a loss.

New virus variants have led to higher death rates and a growing number of daily cases: Colombia recorded more than 23,0000 new infections per day in June — about three times as many as in March.

Plaza MX had to lay off more than 50 of its workers since the pandemic started. In June, the government finally allowed nightclubs to keep late-night hours.

“We really needed this. ... Opening until one in the morning makes the difference between losing money and making a profit.”

“We really needed this,” said Andres Gutierrez, Plaza MX’s manager. “Opening until one in the morning makes the difference between losing money and making a profit.” 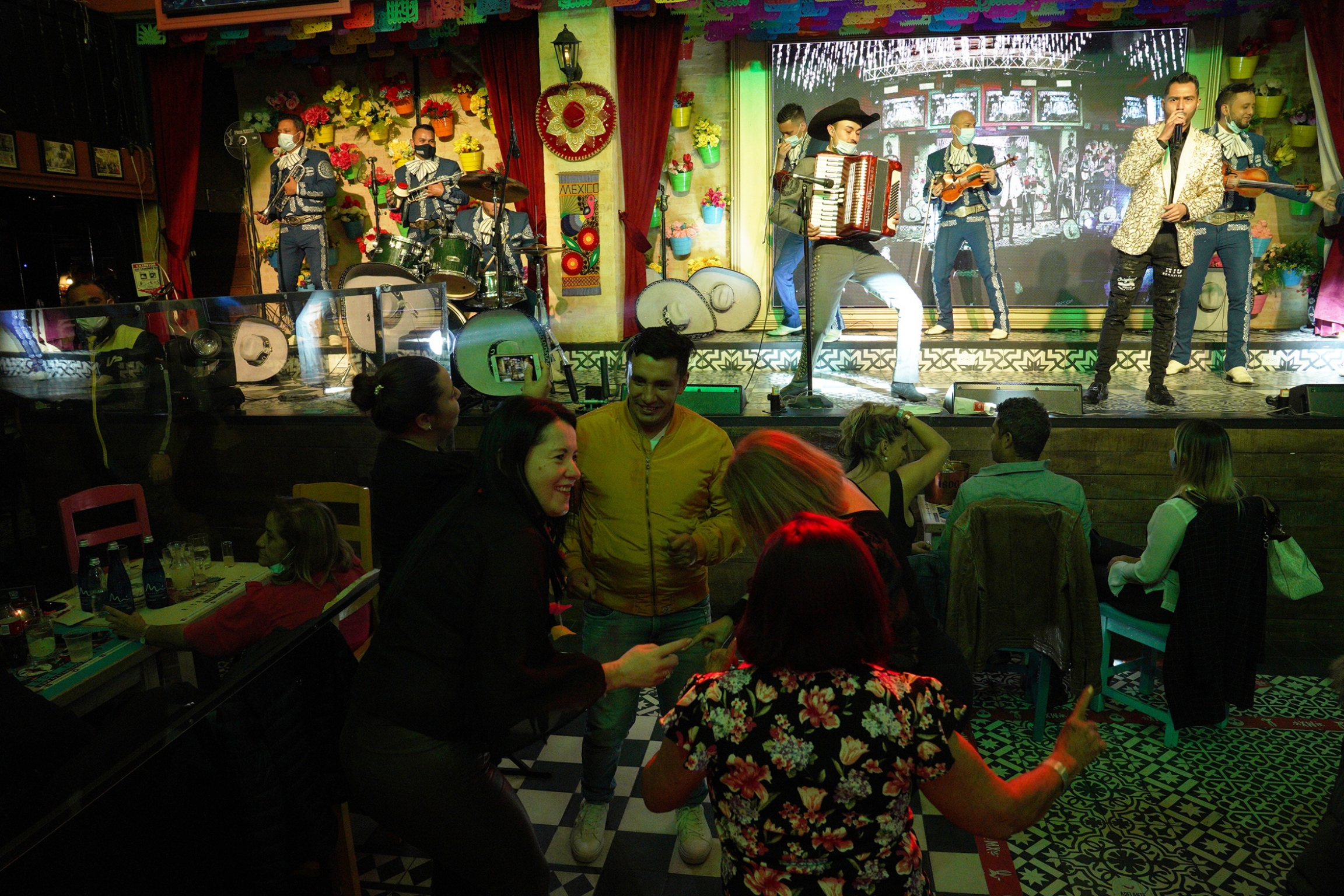 People mingle at the Plaza MX nightclub in Bogotá, Colombia.

Colombia and other South American countries are reopening economies, even as vaccine access remains limited: Just 10% of Colombia's population is fully vaccinated.

Opening the economy under these conditions is risky. But officials say they’ve run out of options.

“From the standpoint of epidemiology, it makes no sense to do this. ... But if you consider the context we are facing, the shocking levels of poverty and discontent, then it's a necessity."

“From the standpoint of epidemiology, it makes no sense to do this,” Bogotá Mayor Claudia Lopez said in a recent speech at the city’s chamber of commerce. “But if you consider the context we are facing, the shocking levels of poverty and discontent, then it's a necessity,” she said.

Related: The pandemic wiped out tourism on Pacific island nations

According to Colombia’s government, 3.5 million people were pushed into poverty in 2020 as lockdowns crippled the economy. Years of economic progress were wiped out.

In Bogotá, 88% of families could afford three meals a day before the pandemic, according to a survey conducted by the national statistics department. Now that’s down to 67%.

Given this context, the mayor’s decision to lift restrictions on businesses has been quite popular.

“At this point everyone just has to do the best they can to protect themselves." 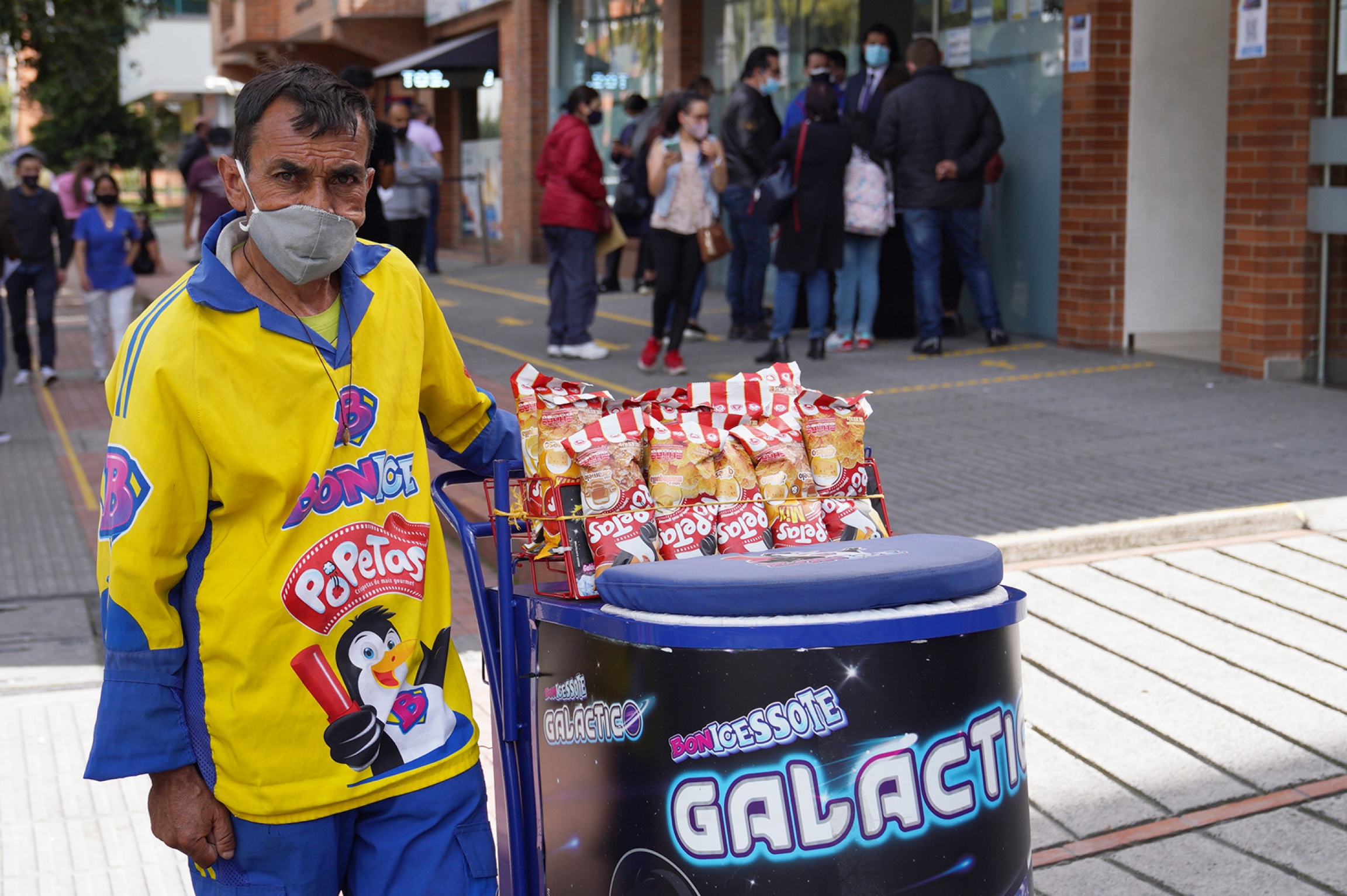 Luis Genaro said he agreed with the mayor's decision to reopen the economy, even as deaths from COVID-19 rise. Genaro said that lockdowns stopped him from working for several months last year.

“At this point everyone just has to do the best they can to protect themselves,” said Luis Genaro, a street vendor who sells popsicles outside a government office in Bogotá.

Genaro, who is in his 60s, adds that he’s already vaccinated. But most of the population hasn’t been that lucky. In fact, only 1 out of 5 Colombians have received a dose of the vaccine.

This lack of access to vaccines, combined with fewer social distancing measures, is taking a toll on hospitals.

At the Samaritana University Hospital in Bogotá, the emergency room fills up each day with patients showing COVID-19 symptoms.

So, emergency room doctors have had to take on extra tasks, like providing artificial ventilation to patients who are severely ill.

“It’s not the best place to do this,” said Dr. Elkin Molina, the ER’s deputy director. “In an intensive care unit, patients get regular attention from physical therapists and we don’t have that here.” 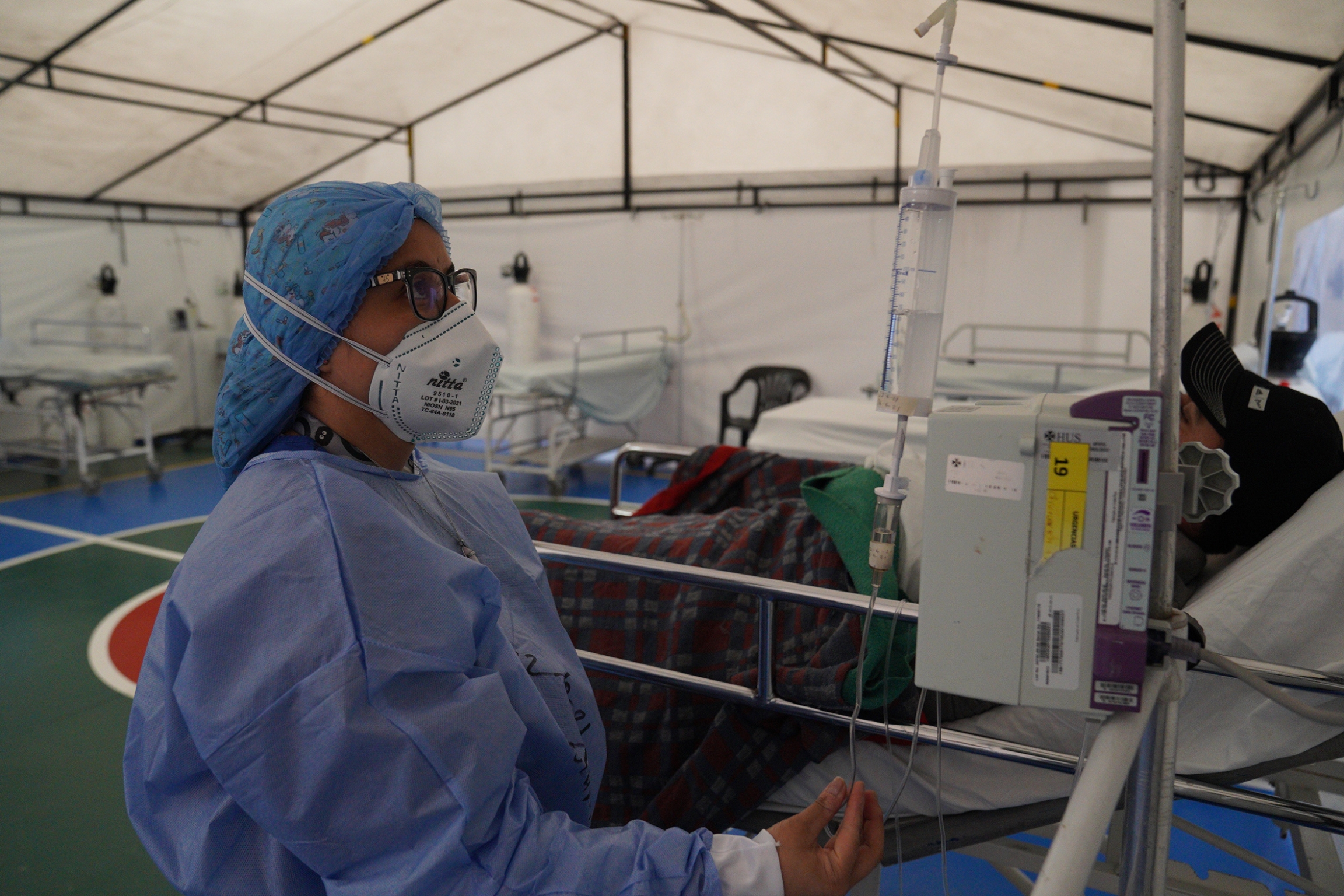 At the Samaritana hospital, the basketball court has been turned into a tent that can fit up to 12 patients. It's part of an effort to expand the ER's capacity as serious cases of COVID-19 rise.

As Colombia’s economy reopens, intensive care wards in cities like Bogotá, Cali and Medellin are 95% full.

More than 600 people are dying from COVID-19 in the country each day — twice as many as two months ago. And doctors say that the kinds of patients who are getting severely ill are changing. 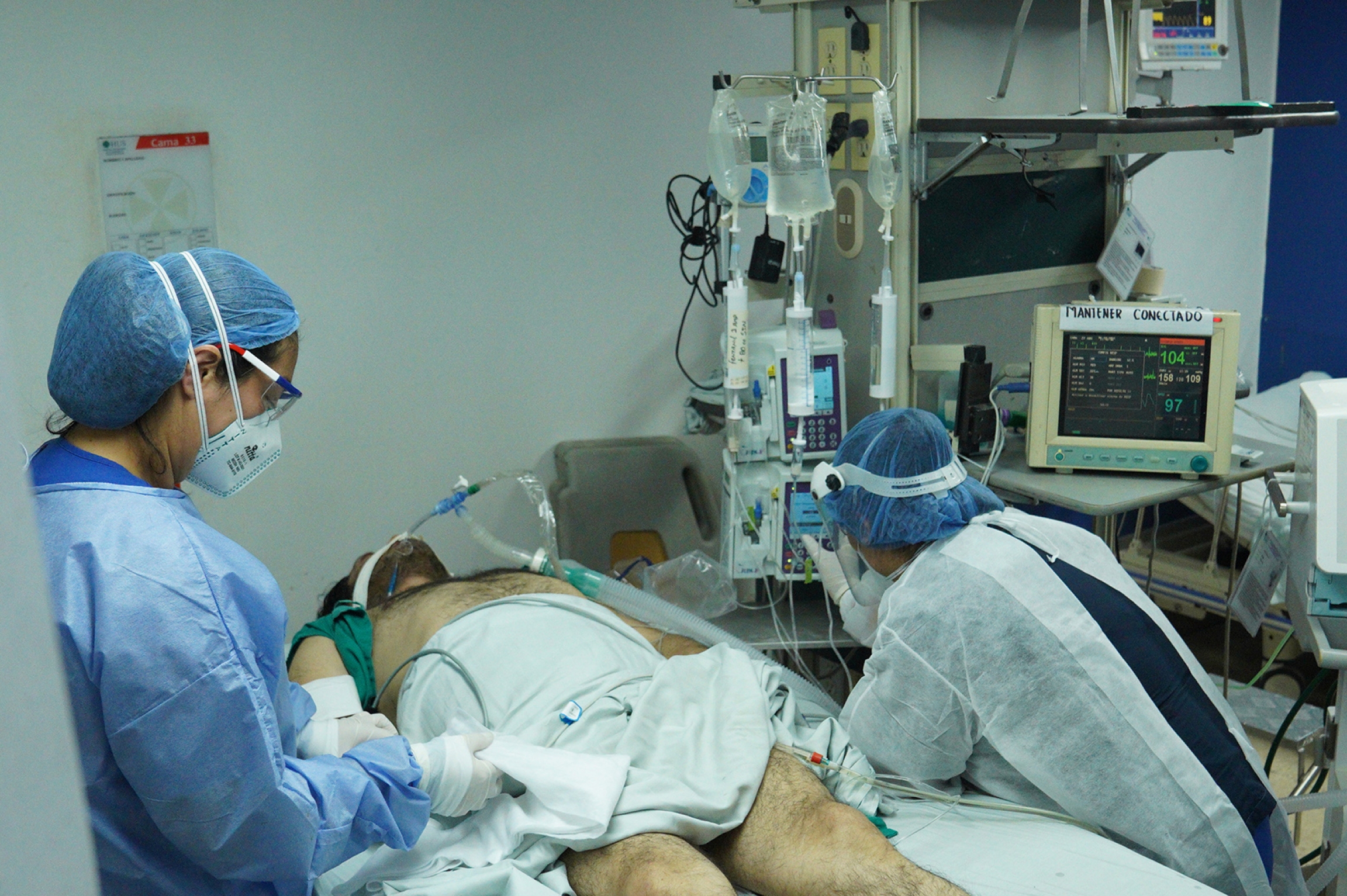 Nurses take care of a patient that is on artificial ventilation at the Samaritana hospital's ER room. Staff at the ER have had to take on new tasks as the hospital's ICU units remain full.

Dr. Cabra said that Colombia has been left with few choices as it struggles to get more vaccines.

“If we were a more developed country, perhaps we could pay people to stay at home, and contagion would slow down,” she said. “But here, people have no choice but to go out and work.”