Hambali has a rap sheet from hell.

Worst among his crimes, the US government alleges, is his plotting with al-Qaeda to pull off a sequel to the Sept. 11 attacks: another hijacked jet, this time crashing into a Los Angeles skyscraper.

Former US President George W. Bush called him “one of the world’s most lethal terrorists.”

Related: Indonesia outlaws one of the world’s largest vigilante groups

That was in 2003, after Hambali, an Indonesian who goes by only one name, was first captured and swept into a CIA dark site. He was later marched into the Guantánamo Bay detention center, notorious even among the other detainees in orange jumpsuits.

But nearly 18 years after his arrest, he is still awaiting his day in court. Only now is the US readying him for trial. 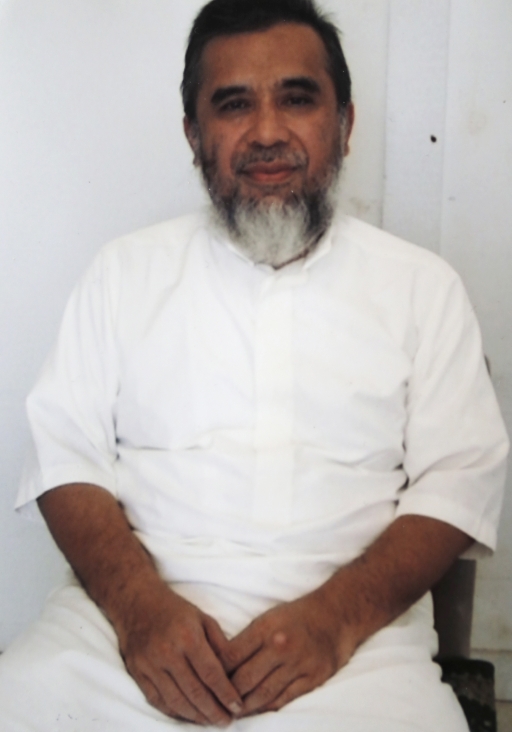 Hambali is shown in this undated photo provided by the Federal Public Defenders Office, at the US base in Guantanamo Bay, Cuba. Hambali is expected to face charges by the military commission in connection with the deadly 2002 Bali nightclub bombings in Indonesia and other attacks.

His case may double as a de facto trial of the American justice system at its most secretive. It hinges on claims, made at the height of the so-called global war on terror, that “enhanced interrogation techniques” (read: torture) were justified.

Hambali’s lawyers — high-end public defenders appointed by the Pentagon — believe this case is a “symbol of the fact that America can no longer claim the moral or ethical high ground. We’re no better than Russia or China or Iran.”

So says James Hodes, a Defense Department attorney. He is part of a legal team also led by Marine Corps attorney Maj. James Valentine, who says there has been “no greater breach of our own values and morals than what happened in Guantánamo and what’s happened as part of the CIA’s torture experiment.”

Hambali is at the core of America’s rationale for torturing terror suspects. Were al-Qaeda masterminds not interrogated in extreme fashion, they would not have given up Hambali and, as one Bush official insisted, “there would be a hole in the ground in Los Angeles to match the one in New York City.”

So goes their claim. Hambali’s attorneys say it is absurd — as is the often-repeated assertion, they add, that their client was the “Osama bin Laden of Southeast Asia.”

“A hyperbolic, gross mischaracterization, a fiction created in the aftermath of the CIA’s torture program. They had to do something to justify their actions.”

“A hyperbolic, gross mischaracterization, a fiction created in the aftermath of the CIA’s torture program,” Hodes said. “They had to do something to justify their actions.”

(The military attorneys prosecuting Hambali turned down interview requests with The World.)

But if Hambali is not some archvillain, who is he?

Hambali, born in an Indonesian village, was at times a kebab seller, an importer/exporter and a mujahideen soldier who fought the Soviet invasion of Afghanistan — an uprising armed, ironically, by the CIA.

From there, all sides agree: Hambali became an operator within Jemaah Islamiyah or JI. It is a militant organization hoping to found an Islamic state in the Southeast Asian tropics. Hambali was, as Hodes puts it, a preacher and a “person who cared very much about his faith. And I believe he wanted others to care about his faith the way he did.”

Many will see this as an understatement. JI has been convicted of attacks that include the 2002 bombing in Bali — a tropical Indonesian island popular with Western partygoers. The blasts left more than 200 people dead. (Hambali was not calling the shots when that tragedy occurred, his attorneys claim. Indonesia’s government has already executed the men deemed responsible.)

But Hambali was friendly with al-Qaeda and may have received funds from the organization, according to Dr. Ahmad El-Muhammady, a counterterrorism expert with Malaysia’s International Institute of Islamic Thought and Civilization.

Still, El-Muhammady’s extensive conversations with the region’s “jihadi community,” he said, suggest that Hambali was not the top actor in the area.

“If you really look at his influence … calling him the bin Laden of Southeast Asia? I would say we make a tiger out of a cat. That’s how I see it.”

“If you really look at his influence … calling him the bin Laden of Southeast Asia? I would say we make a tiger out of a cat,” El-Muhammady said. “That’s how I see it.”

So, how to explain the gulf between this supposed mid-tier operator and Bush’s proclamation that Hambali was among the world’s “most lethal” terrorists?

Anyone with ties to al-Qaeda was scooped up by the pervasive American manhunt following the 9/11 attacks, El-Muhammady said.

“The US went through such a painful experience,” he said, “and chasing down all these guys was a top priority” even if “their experience was not so direct.”

Hodes has a sharper diagnosis: “George Bush said a lot of really fantastically stupid things over his eight years as president. This might have been one of the bigger ones.”

What Hambali’s attorneys argue is that, after he was tortured, US officials were compelled to vindicate their cruelty by creating outsized personas for suspects — such as contriving evidence that Hambali was imminently preparing a second 9/11.

“They chose the path of the dark side,” Maj. Valentine said.

Just how brutal was Hambali’s torture?

“I’m not allowed to tell you anything because I am bound by a security agreement,” he said.

“I’ve met with Hambali. I can tell you, absolutely, he is a torture victim. In every way possible.”

“I’ve met with Hambali,” Maj. Valentine said. “I can tell you, absolutely, he is a torture victim. In every way possible.”

The contention of Hambali’s lawyers is that, in a more moral system, the CIA agents who directed this torture would face justice. But it is unlikely the public will ever know their names. No president, even Barack Obama, has seemed keen to air out the details of this case; Obama actually granted immunity to the CIA torturers.

Hambali’s case withered under former President Donald Trump. Only now is it being forwarded — and the cause certainly appears political.

Only when President Joe Biden was inaugurated did the commission overseeing the cases — led by a Trump appointee, Col. Jeffrey Wood — push Hambali’s case ahead as a military tribunal, not a civilian proceeding, which would have offered more transparency.

Maj. Valentine believes “the panic button” was hit before the new White House could get settled. Biden has signaled that Guantánamo should be closed.

There is no guarantee Hambali’s trial will be held in a speedy fashion — even though nearly 18 years have passed since his capture. Hambali is still innocent until proven guilty. He has been named worst among the world’s terrorists, and yet, the American justice system shows no urgency in bringing justice.

Hambali’s arraignment is set for Aug. 30. How long until a final judgment is rendered?

“We have no idea,” Hodes said. “Everything is fluid … at this military commission. I can’t really refer to it as a trial.”