Eight million people in China are blind, but opportunities for them remain limited.

This year, only 11 in the country took the college entrance exams. Many blind people, instead, find work as massage therapists or piano tuners. But one man in China recently became the first blind person in Asia to climb Mount Everest.

Zhang Hong grew up in the rural countryside, caring for his dad and uncle who were blinded by glaucoma. At the age of 21, he lost his sight, too. Then, a few years ago, he heard about Erik Weihanmayer, the first blind person to summit Everest 20 years prior, and Zhang was inspired to attempt it himself. 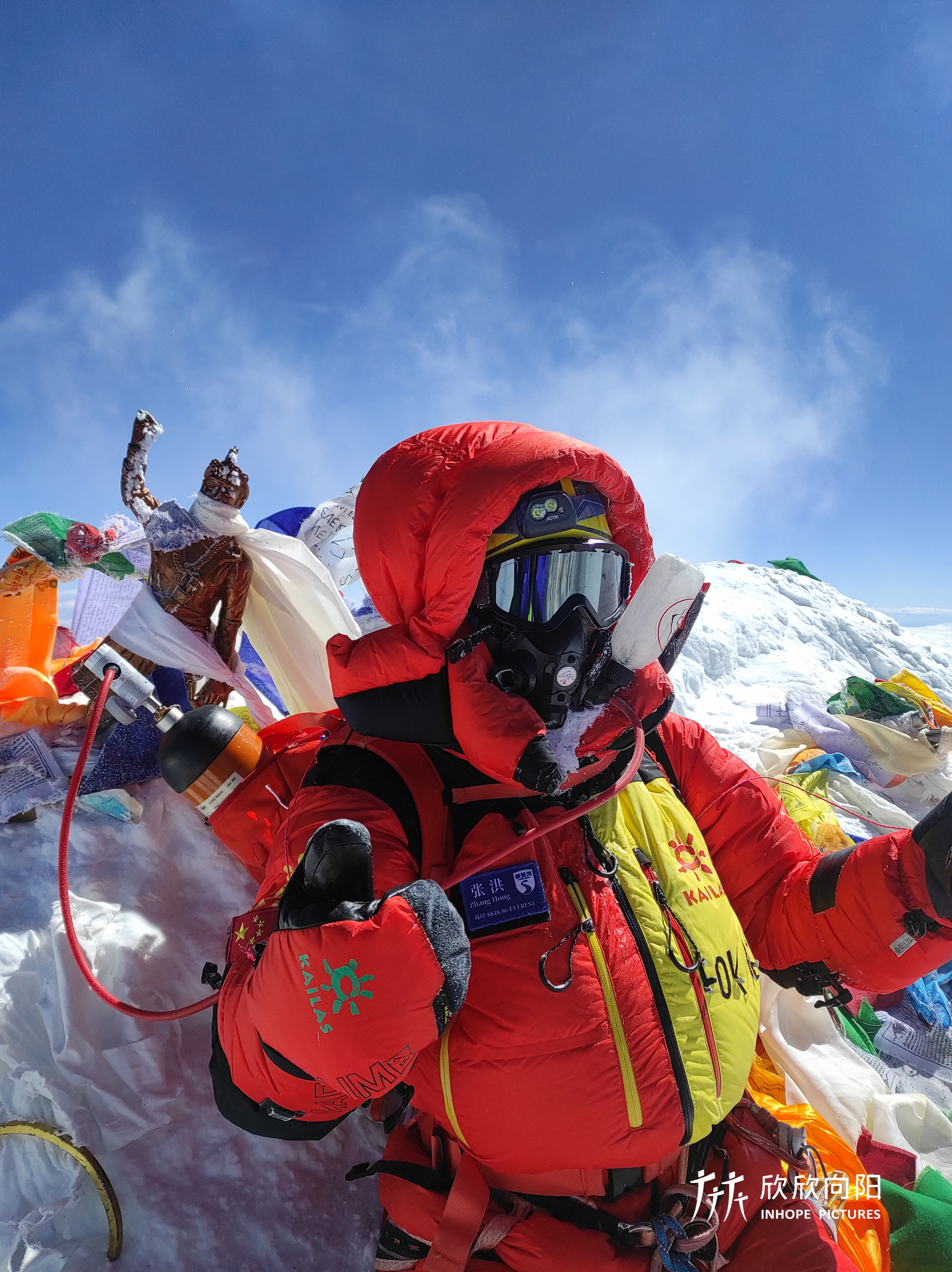 Zhang Hong, who is blind, after reaching the summit of Mount Everest.

He spent years training his body to prepare for the climb. Every day, he’d strap on a heavy bag and climb 100 flights of stairs at the hospital where he and his wife work as massage therapists.

But it couldn’t fully prepare him for the challenge of climbing Everest — during a pandemic — and at the age of 46. Once they started the ascent, Zhang said the biggest challenge was the weather.

"My guide kept telling me soon, soon, but all I felt was fear." 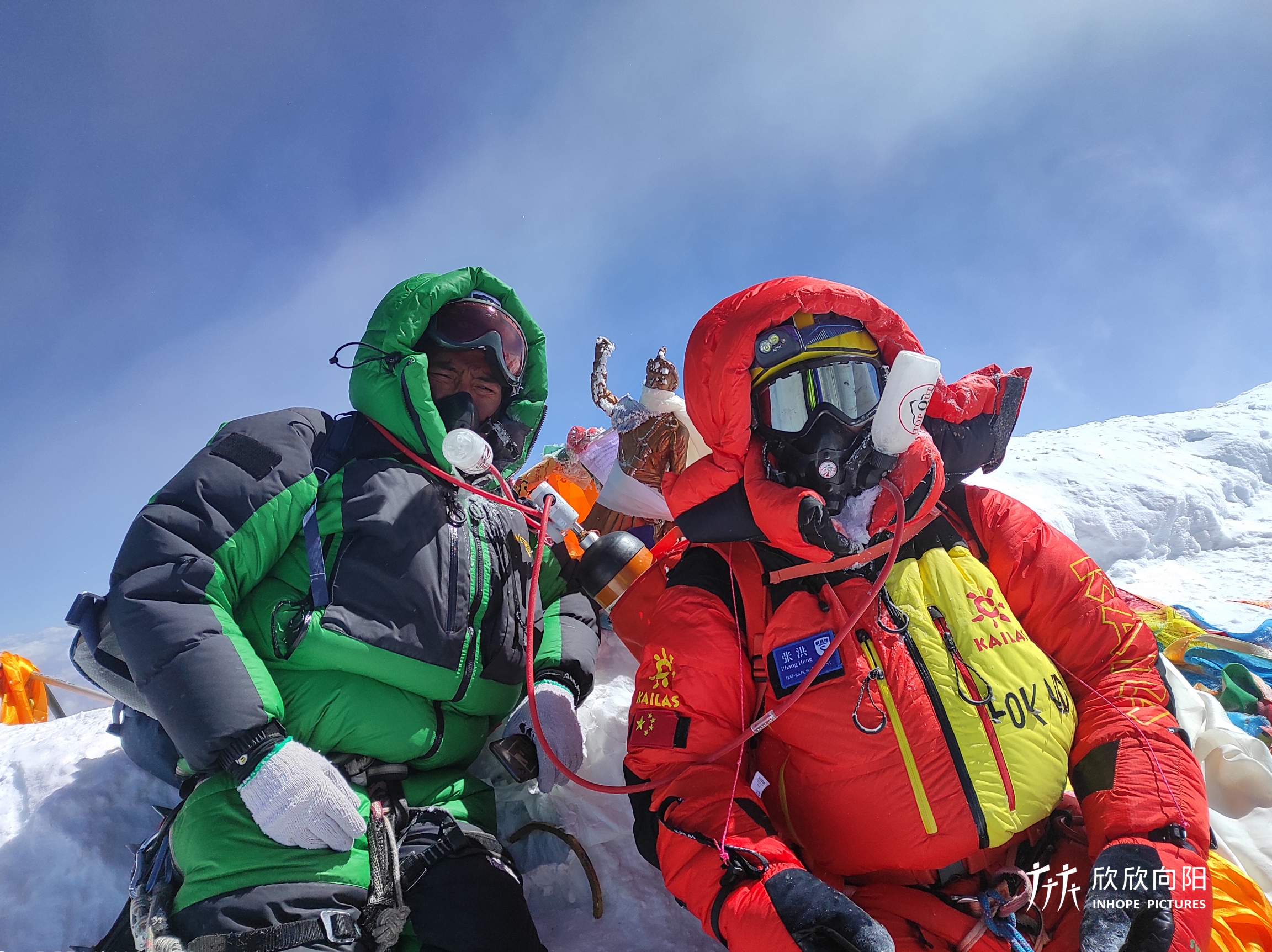 Zhang Hong (right) and his guide, Qiangzi, at the summit of Mount Everest.

His guide, Qiangzi, talked him through the entire final ascent, which took them more than 13 hours in low-oxygen conditions.

But, he said, climbing blind has one advantage — you can’t see the danger around you.

“Then my guide told me, you made it to the summit,” Zhang said. “I only believed him after he said it a few times.”

Most climbers describe reaching the summit by what they can see — the curve of the Earth, the mountain peaks, the wispy clouds below them.

Zhang said for him, that moment was totally different. A video captured him standing among the Tibetan prayer flags at the peak

There was none of the excitement I expected to feel. ... It was so stressful.”

“The wind was beating my head,” he said. “It was like a monster. I was absolutely terrified. There was none of the excitement I expected to feel. All I could feel was the wide-open space and the sound of the wind. It was so stressful.”

Over a walkie-talkie, he and his team shared congratulations with a documentary film crew that had been following him.

“I told my guide, let’s take a photo and quickly go down,” he said. “I was only at the top for about five minutes.”

But, he said, reaching the top of Mount Everest was never the goal.

“Reaching the peak, you’re only halfway there,” he said. “It’s not the way up to the top where most mountain climbers get into trouble, it’s on the way back down, so I knew I hadn’t succeeded yet.”

He said that sense of accomplishment only came days later when he made it off the mountain.

Climbing Mount Everest wasn’t just about testing his physical strength. It was also about facing up to his own fears, Zhang said.

It was an impossible dream, said Fan Lixin, who led the documentary team on the climb.

"We all need the same kind of courage to face the Mount Everest in every one of our lives.”

“I thought if I would be able to follow the process, the story would reflect something larger than life,” Fan said. “And it’s a story that would affect all of us. We all need the same kind of courage to face Mount Everest in every one of our lives.”

Even after facing his own Everest, Zhang said he’s only just begun. He hopes to complete an Explorers Grand Slam, reaching the seven tallest peaks in the world, along with the North and South Poles.