Since he was deported to Colombia, Mauricio Zuñiga has been learning a lot about coffee.

At a lab near Cali, he joins two women in white lab coats, who are professional tasters. Zuñiga slurps a spoonful of freshly brewed coffee, and swirls it in his mouth for a few seconds before spitting it back out.

The cupping sessions help him come up with ideas for the blends that he now makes in Colombia and exports to the United States. 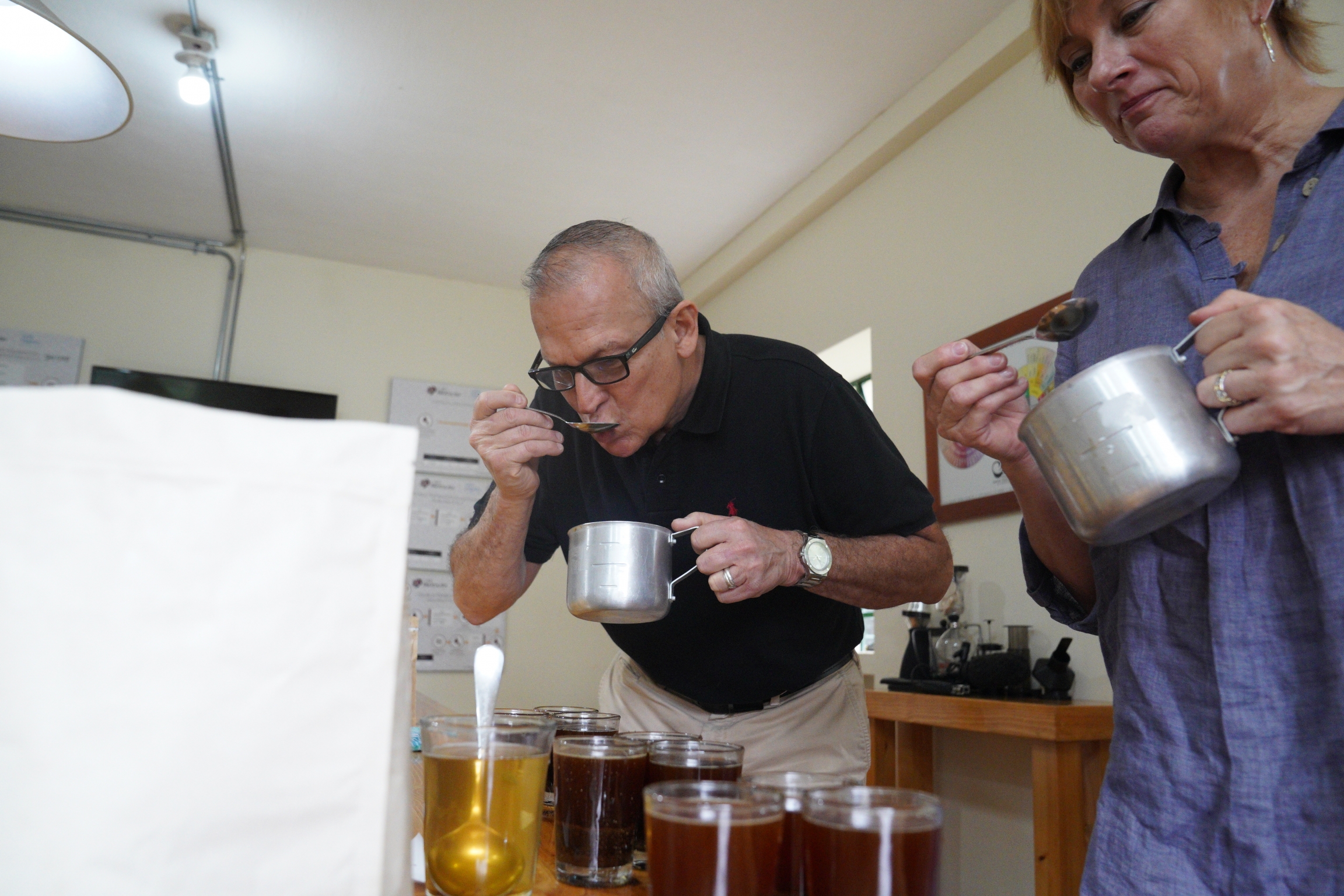 Mauricio Zuñiga tastes different kinds of coffee at a lab near Cali, Colombia on May 27, 2021. These cupping sessions help him to come up with ideas for the blends he exports to the United States.

Mauricio Zuñiga was deported to Colombia after living for four decades in Florida, where he got married, raised three daughters and ran a successful medical supplies company.

Related: Kickball builds bonds between migrants and locals in this Colombian border city

Now at the age of 62, he has been forced to reinvent himself. With the help of family and friends, the entrepreneur has set up a coffee brand called Deportado, which is Spanish for “deported.”

It’s not a name that you would expect to see on a bag of specialty coffee. But Mauricio Zuñiga is hoping it will spark conversations.

“In our minds, we had the idea that this was going to create awareness about the issues of deportation. And the unfairness of the system that leaves people like myself out of the country, instead of actually resolving the issue within the country.”

“In our minds, we had the idea that this was going to create awareness about the issues of deportation,” Mauricio Zuñiga said. “And the unfairness of the system that leaves people like myself out of the country, instead of actually resolving the issue within the country.”

Mauricio Zuñiga’s immigration nightmare started on Halloween of 2018, when Immigration and Customs Enforcement (ICE) agents carrying guns and badges arrived at his office in Miami, arrested him and whisked him to a detention center.

At the time, Mauricio Zuñiga owned a company that refurbished clinical beds for some of the biggest hospitals in South Florida. 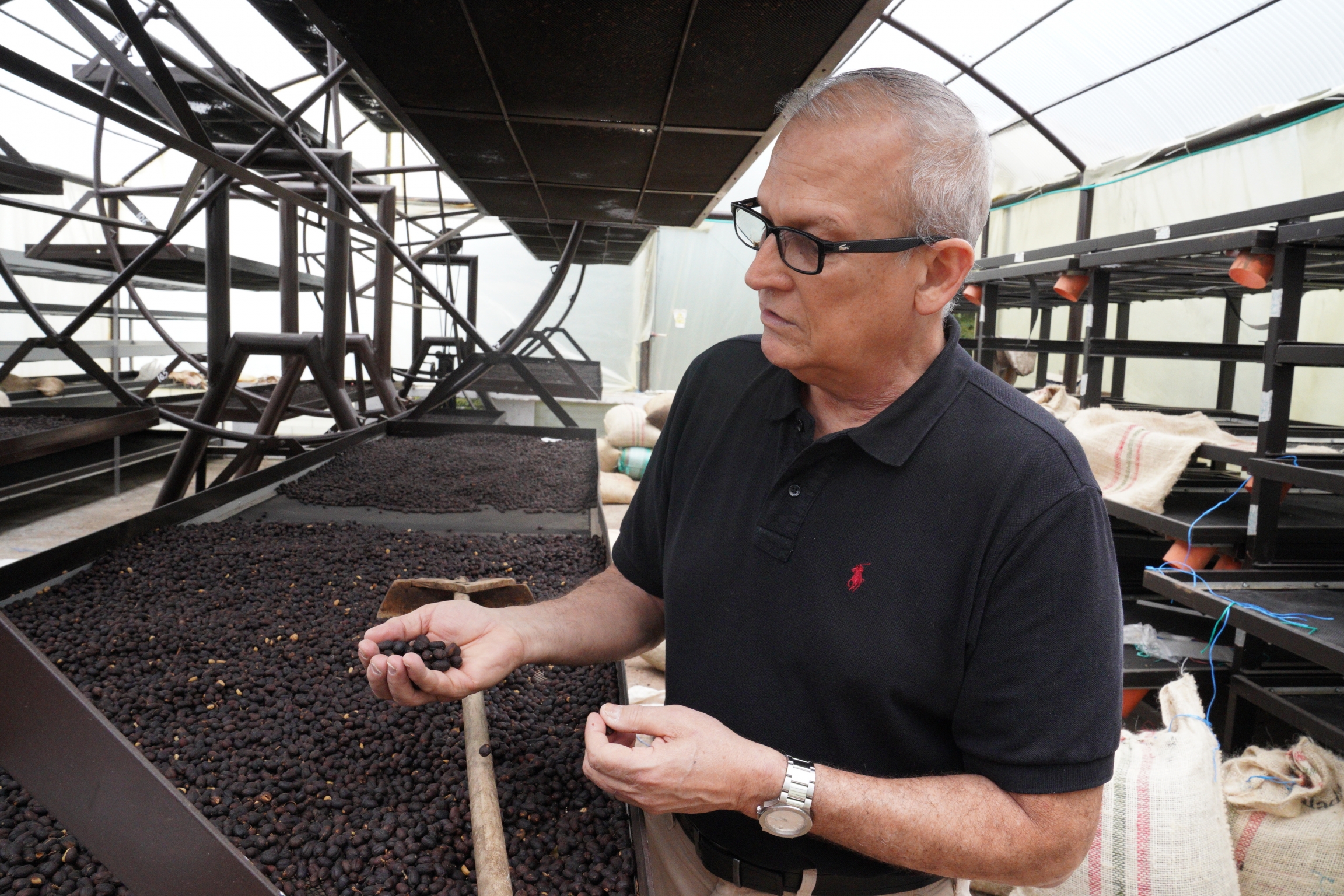 Mauricio Zuñiga checks out a batch of coffee beans that are being dried up at the Immaculada farm near Cali, Colombia, on May 27, 2021.

His wife, Roxanne Zuñiga, who was born in the United States, watched in astonishment as her husband was taken away in handcuffs.

“The whole thing was just very traumatic and very difficult. I had to turn around and face all of our employees and try to explain to them what was going on.”

“The whole thing was just very traumatic and very difficult,” she said. “I had to turn around and face all of our employees and try to explain to them what was going on.”

The business, which had 10 employees, quickly began to fall apart: “That happened on a Wednesday and on Friday, half of the guys quit,” Roxanne Zuñiga said. “The way things rolled, my husband went to work one day and never came back home.”

Related: Fishermen risk their lives to defend a vital lake in Colombia

Mauricio Zuñiga’s deportation stems from a banking crime he confessed to in 1998 when he worked in finance. He did some months in jail for that. But afterward, he was living in the US legally, and applying for permanent status.

Still, a judge refused to extend his visa. At the time, immigration officers were increasing deportations of immigrants with criminal records.

“No matter what we did and explained, the zero-tolerance policies that were enacted during the Trump administration, they just basically said that’s it,” Mauricio Zuñiga said. “You need to go take care of your immigration case outside of the country.”

Mauricio Zuñiga had worked as an informant for the Drug Enforcement Administration (DEA) in the late ’90s and early 2000s as part of a deal to reduce his sentence for banking fraud.

As an undercover informant, he met with bankers and other businessmen laundering money for drug cartels and supplied DEA agents with information that led to more than 50 arrests and $6 million in seizures, according to a 1998 memo written by David Tinsley, an agent at the DEA’s Miami office.

But that didn’t stop Mauricio Zuñiga from being deported. Instead, he was flown to Colombia. He had to start thinking about what to do next.

“I tried to do more of the medical stuff but it was a very closed environment. So, I did translations for quite some time and got paid for that.”

“I tried to do more of the medical stuff but it was a very closed environment,” Mauricio Zuñiga said. “So, I did translations for quite some time and got paid for that.”

His wife, Roxanne Zuñiga, managed to sell off their company’s assets and joined him in Colombia.

Related: This frog farm in Colombia is trying to put poachers out of business

During a visit to a friend’s coffee farm, the couple realized that they could build a new business, by exporting coffee.

“The idea came from a good friend of mine,” Mauricio Zuniga said.

In April of this year, Deportado exported its first batch of ground coffee to the United States, shipping about 400 pounds to a warehouse in Colorado.

The company makes three blends that are named, Amnesty, La Sombra, or “the shadow,” and La Fuerza, which means “strength.”

Mauricio Zuñiga says that his daughters Julia Zuñiga and Alaina Zuñiga came up with the names. 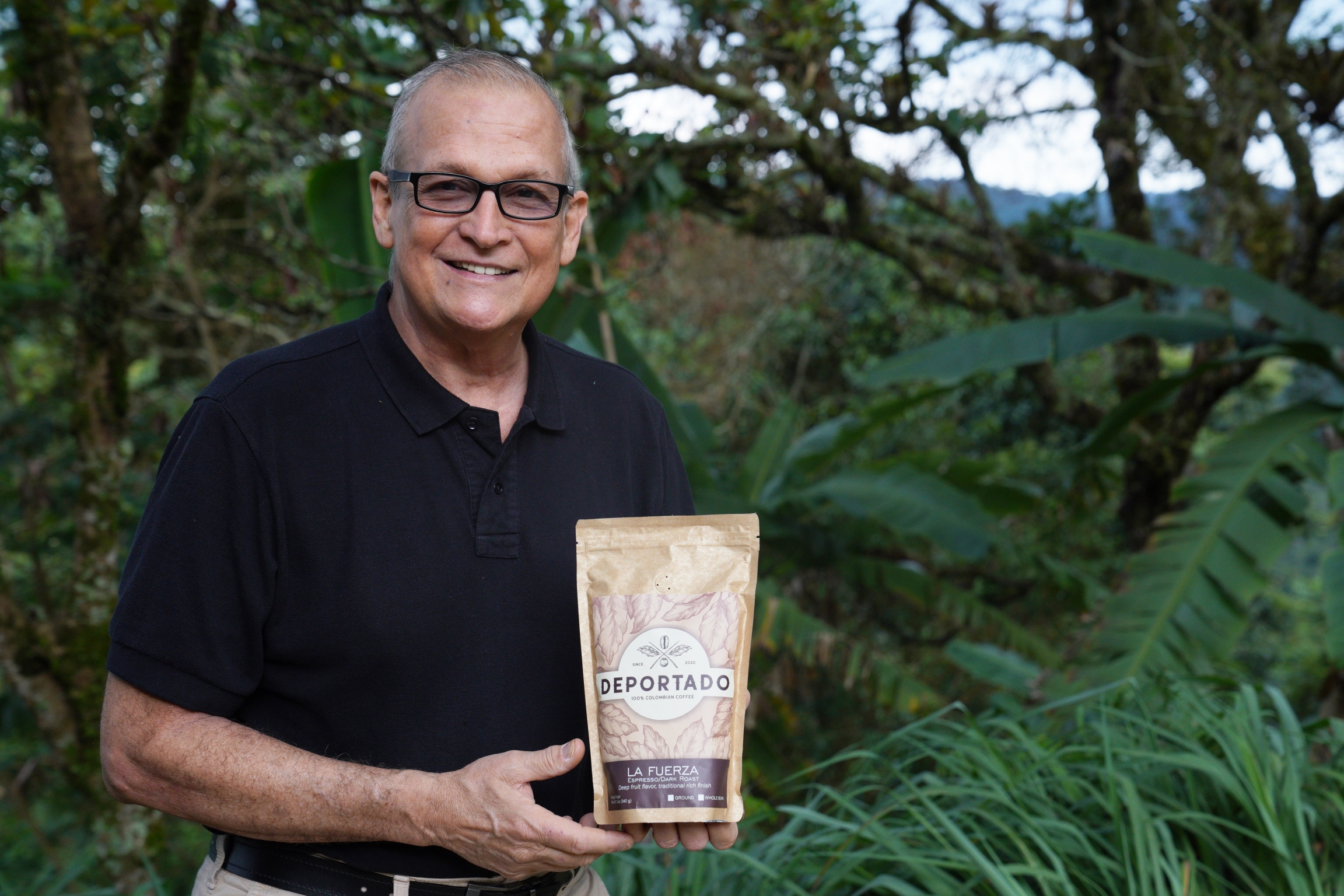 In April 2021, Deportado Coffee exported its first batch of coffee to the United States. Mauricio Zuñiga hopes the brand will spark conversations on immigration reform.

Julia Zuñiga, an art teacher in Colorado, says that at first, the family had doubts about making the brand so political. But eventually, everybody warmed up to the Deportado name.

“The reality is that this is happening not only to people in the United States, but to people all around the world from different types of backgrounds and I think it’s something that needs to be spoken about,” Julia Zuñiga said. “So many conversations are had around cups of coffee — and why not something as important as this one?”

For every bag it sells on its website, Deportado donates $1 to Families Belong Together, a group that helps immigrants going through deportation proceedings.

“We understand that we have been very privileged during this time to have access to resources and we also acknowledge that there are many people going through the same thing that don’t have the resources that we did.”

“We understand that we have been very privileged during this time to have access to resources and we also acknowledge that there are many people going through the same thing that don’t have the resources that we did,” Julia Zuñiga said.

Mauricio Zuñiga says that the coffee brand has given him something positive to do while he tries to get a new visa to return to the United States, where he plans to reunite with his family.

But setting up this business hasn’t been easy.

He’s been battling prostate cancer that resurfaced after he was deported. And the recent protests and roadblocks in Colombia have slowed down his plans to export more coffee.

Still, he says that all of this makes him more resilient. And it has taught him that it's never too late to get a fresh start.

“I tell my daughters that Colonel Sanders started Kentucky Fried Chicken when he was 66 years old,” Mauricio Zuñiga said. “So, we still have four more years.”