Shops remained shuttered, some government workers hadn’t been paid and the town’s main hospital was utterly laid to waste. But the Tigrayan fighters still claimed victory, swaggering through the streets of Hawzen with their guns.

Hawzen, a rural town in the Tigray region of northern Ethiopia, is a microcosm of the challenge facing Prime Minister Abiy Ahmed — and a warning that the war here is unlikely to end anytime soon. 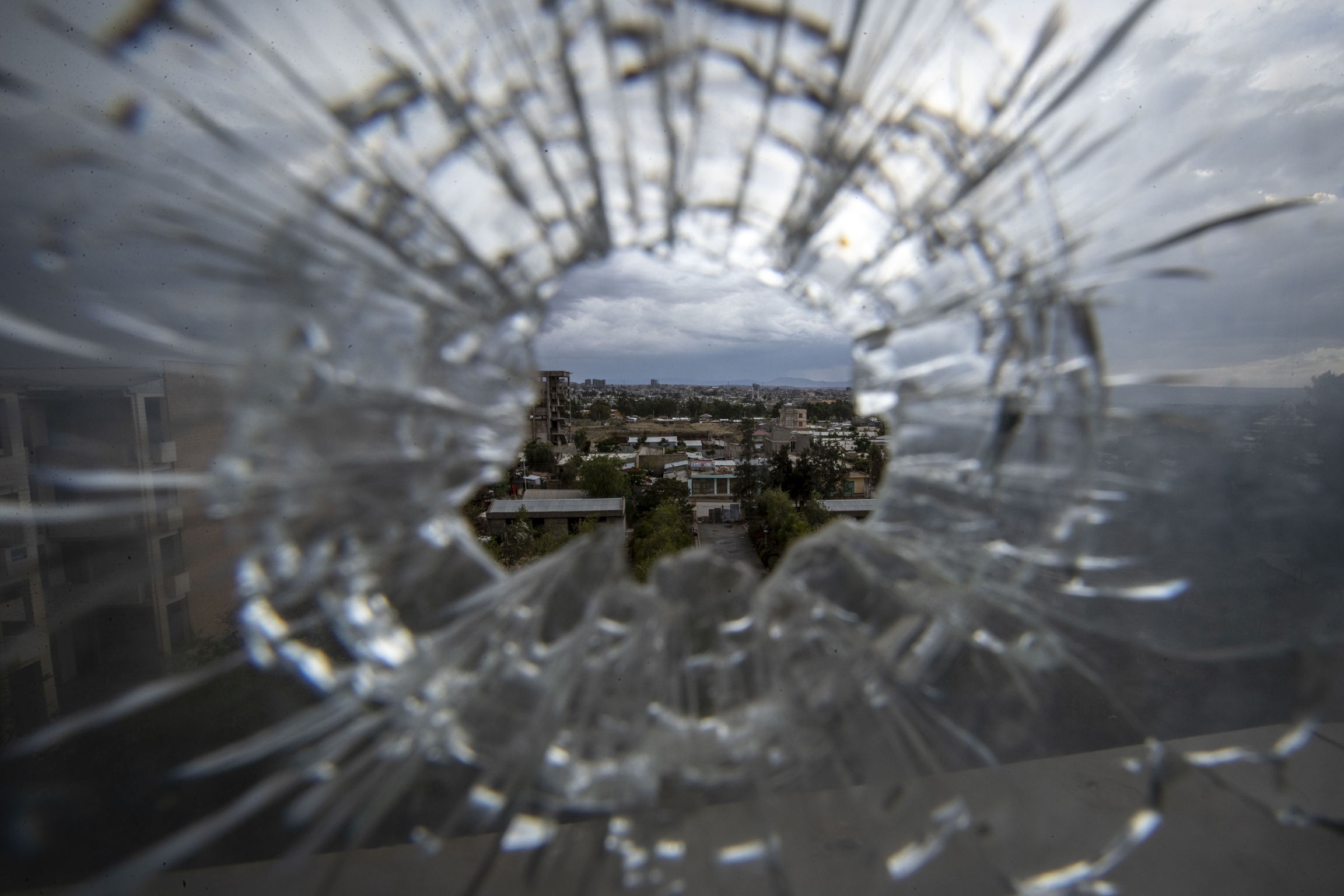 The city of Mekele is seen through a bullet hole in a stairway window of the Ayder Referral Hospital, in the Tigray region of northern Ethiopia, on Thursday, May 6, 2021. While the government now holds many urban centers, fierce fighting continues in remote rural towns.

When The Associated Press arrived in May, Tigrayan fighters had recently retaken Hawzen from Ethiopian government troops, laying claim once again to land that has switched control multiple times since the war began in November.

To the Ethiopian government, the fighters are terrorists who have defied the authority of Abiy in the federal capital, Addis Ababa. But almost everyone the AP spoke with in Hawzen supported them and the Tigray People’s Liberation Front, or TPLF, the party of the region’s ousted and now-fugitive leaders.

“The people elected us, so we are not terrorists."

“The people elected us, so we are not terrorists,” said fighter Nurhussein Abdulmajid, standing confidently in the middle of the road with a gun on his shoulder, as a crowd listened. “[Abiy]’s the one who is the terrorist. A terrorist is someone who massacres people.” 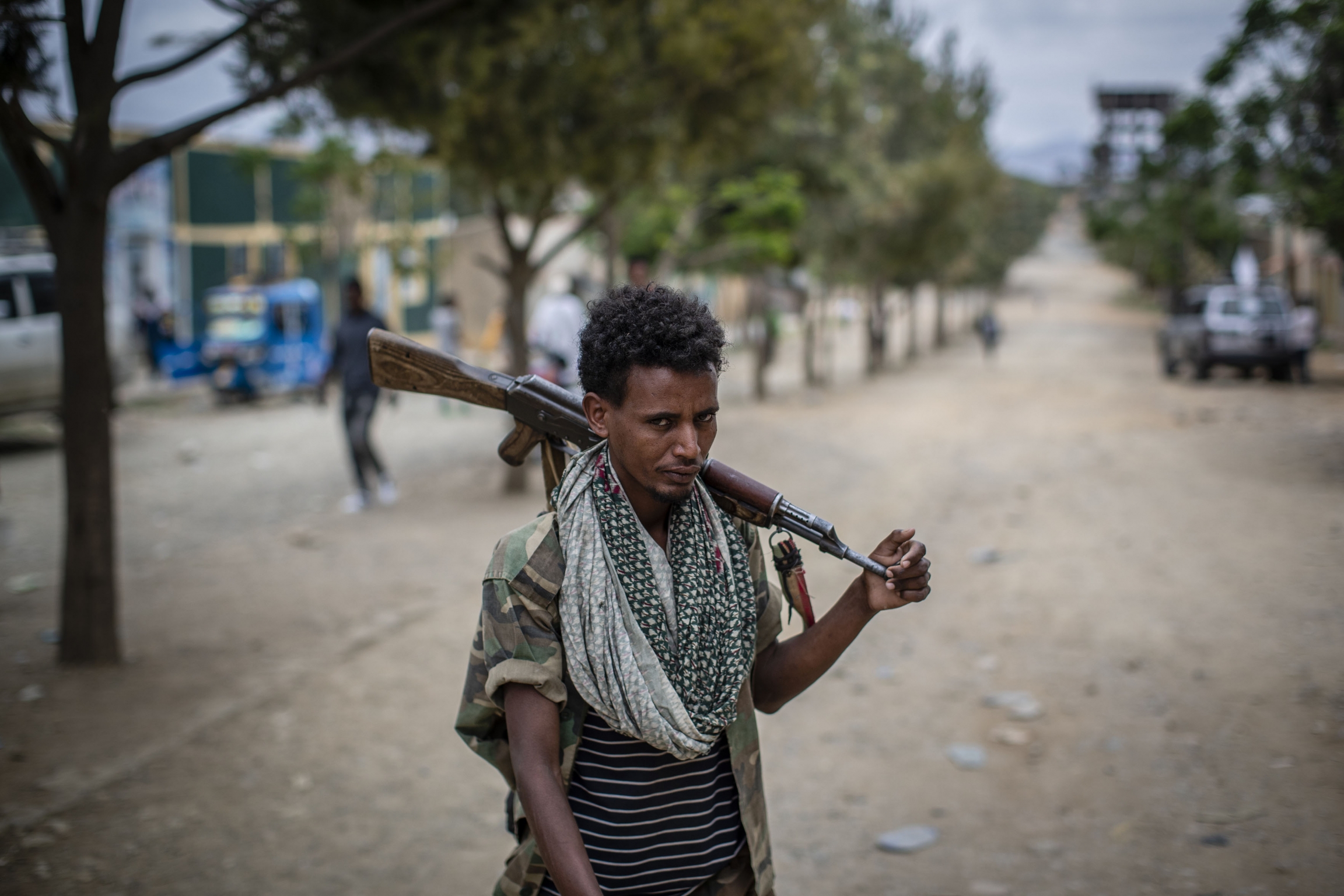 A fighter loyal to the Tigray People's Liberation Front (TPLF) walks along a street in the town of Hawzen, then-controlled by the group, in the Tigray region of northern Ethiopia, on Friday, May 7, 2021. While the government now holds many urban centers, fierce fighting continues in remote rural towns like Hawzen.

The battle for Hawzen is part of a larger war in Tigray between the Ethiopian government and the Tigrayan rebels that has led to massacres, gang rapes and the flight of more than 2 million of the region’s 6 million people.

The AP was able to get through an Ethiopian military roadblock and cross the front line to get a rare look at a town held by Tigrayan fighters, who carried light weapons they said they had seized from opponents. 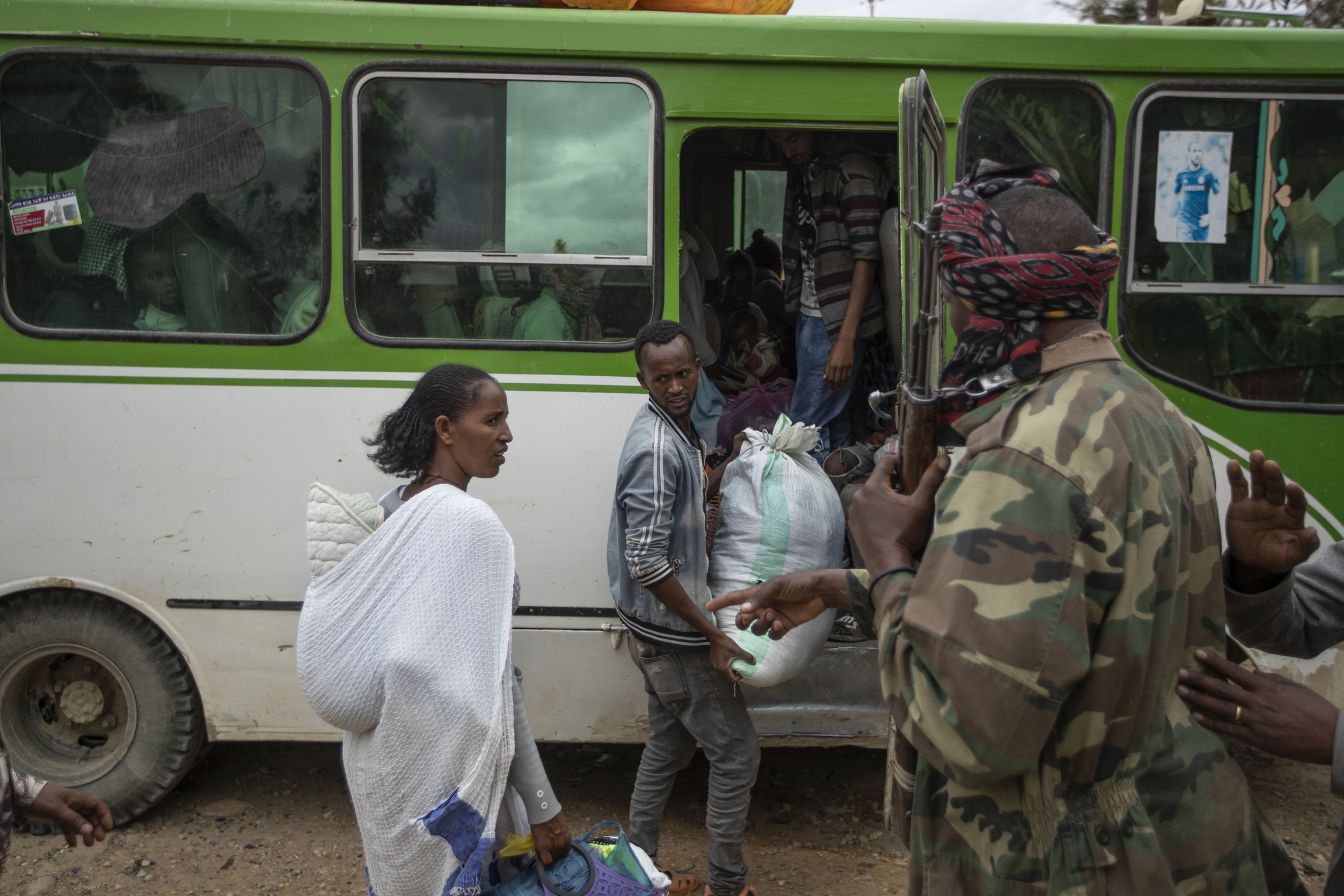 People prepare to depart on a bus as a fighter loyal to the Tigray People's Liberation Front (TPLF), right, stands guard in the town of Hawzen, then-controlled by the group, in the Tigray region of northern Ethiopia, on Friday, May 7, 2021. While the government now holds many urban centers, fierce fighting continues in remote rural towns like Hawzen.

If anything, recent atrocities appear to have increased support for the TPLF.

One 19-year-old said she was raped by an Ethiopian soldier and is now six months pregnant. After trying and failing to terminate the pregnancy herself, she is now desperately hoping someone in a local hospital will help her.

As soon as possible, she said, she wants to join the rebels.

The AP does not name victims of sexual abuse. 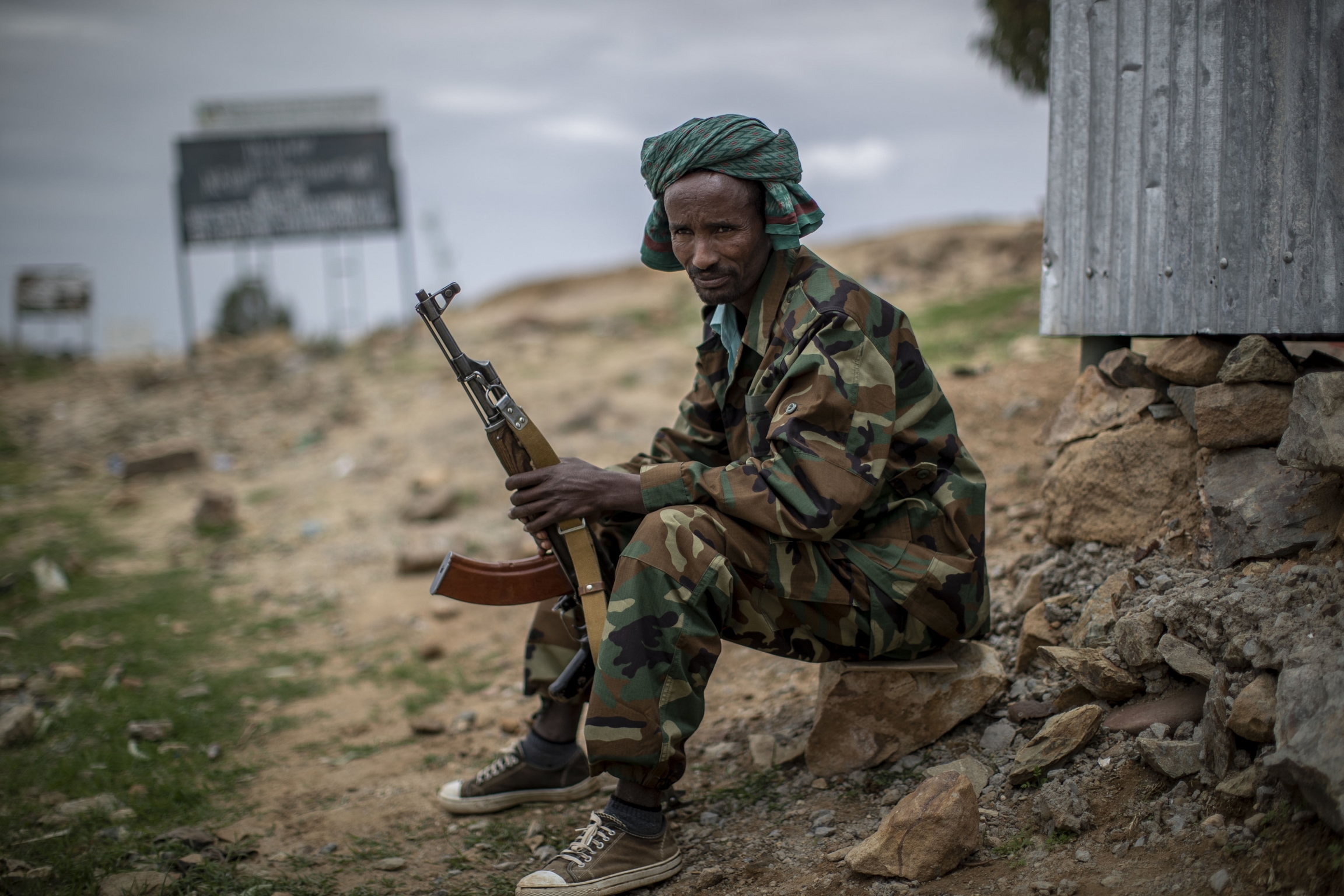 A fighter loyal to the Tigray People's Liberation Front mans a guard post on the outskirts of the town of Hawzen, then-controlled by the group, in the Tigray region of northern Ethiopia, on Friday, May 7, 2021. The battle for Hawzen is part of a larger war in Tigray between the Ethiopian government and the Tigrayan rebels that has led to massacres, gang rapes and the flight of more than 2 million of the region’s 6 million people.

The TPLF was on top of a coalition that ruled Ethiopia for nearly three decades. That changed in 2018, when Abiy rose to power as a reformist. Abiy alienated the TPLF with efforts to make peace with its archenemy, Eritrea, and rid the federal government of corruption.

Tigray’s leaders fought back. In 2020, after a national vote was suspended because of the pandemic, the TPLF went ahead with its own elections in the region.

Asserting that Tigrayan fighters had attacked a military base, Abiy sent federal troops into Tigray in November. Government forces are now allied with militias from the rival Amhara ethnic group as well as soldiers from neighboring Eritrea, who are blamed for many atrocities.

Abiy acknowledged recently that the highly mobile Tigrayan guerrillas were stretching the Ethiopian military, springing ambushes from the rugged highlands where they hide. And in April, the International Crisis Group predicted that entrenched resistance on both sides meant “the conflict could evolve into a protracted war.”

Abebe Gebrehiwot, a Tigrayan appointed by Abiy to serve as Tigray’s deputy chief executive officer, told the AP that he and others in the interim administration didn’t feel trusted by the people, making their work more difficult.

“We are not getting as much public support as we expect."

“We are not getting as much public support as we expect,” he said in his office in Mekele, the largely peaceful regional capital.

Representatives of the Ethiopian government didn’t respond to requests for comment.

But Billene Seyoum, a spokeswoman for Abiy’s office, told reporters Thursday that “the suffering of Ethiopians who are victims of a situation that is not of their choosing is a source of pain." Efforts to alleviate the suffering of Tigrayans "have been marred by various challenges given the complexity of any armed engagement,” she said.

Residents of Hawzen, a town of a few thousand people, said it had seen fighting four times since November. A Tigrayan sentry in military fatigues sat atop a hill leading into the town, on the lookout for trouble.

Yohanes Kidanemariam, a fighter in civilian clothes who held a gun between his legs, claimed they would eventually outlast their opponents.

“We don’t have any doubt. We have extreme public support and we have a straight and clear objective: Freedom.”

“We don’t have any doubt,” he said. “We have extreme public support and we have a straight and clear objective: Freedom.”

Many here spoke disapprovingly of Abiy, saying they no longer trust him to keep them safe. Gebremedhin Aregawi, a tour guide who helped manage civilian relations for the guerrillas, said the entry of federal troops into Mekele doesn’t mean Abiy won.

“If he won, how is fighting still going on up to now?” Gebremedhin asked.

Gebremichael Welay, a civics teacher at a primary school in Hawzen, said it was “difficult to live” amid the waves of fighting and bombardment that have rocked his hometown. He flees to a nearby forest when Ethiopian and Eritrean troops are in charge.

“They do not discriminate,” said the rheumy-eyed 40-year-old as he sat on a stool by the roadside. “If they find you, they kill you.” 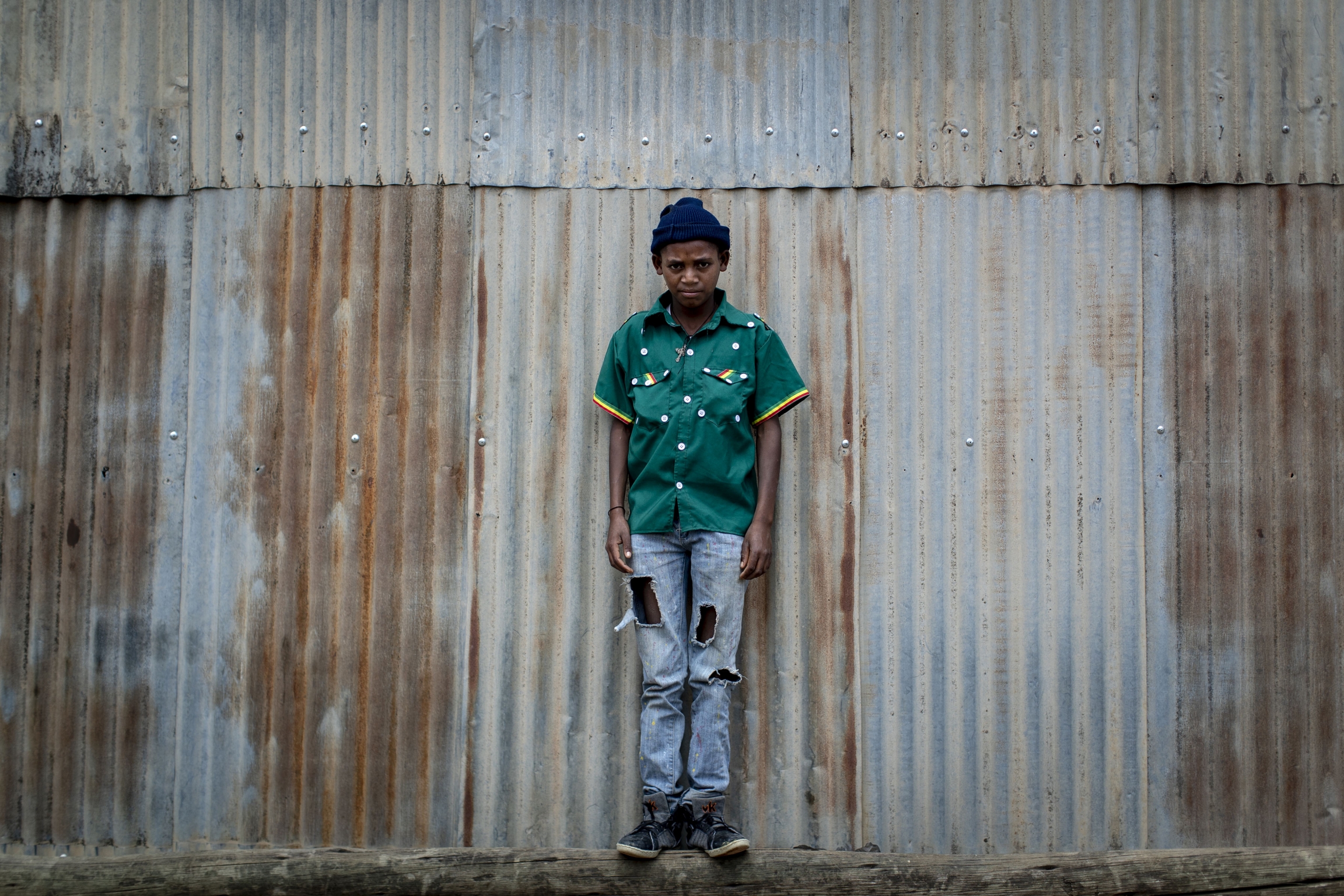 Gebremedhin Gebreslassie, 12, who fled from fighting in the town of Hawzen, stands next to a metal shack at a reception center for the internally displaced in Mekele, in the Tigray region of northern Ethiopia, on Sunday, May 9, 2021. Residents of Hawzen, a town of a few thousand people, said it had seen fighting four times since November.

As the two sides fight, civilians, and especially children, are suffering heavily.

More and more children are caught up in shelling in Hawzen and other nearby areas, with at least 32 admitted to the regional Ayder Hospital in Mekele for blast injuries from December to April.

Thirteen left with an amputated limb, according to official records.

Haftom Gebru, a 12-year-old boy from Hawzen, was wounded by shrapnel in fighting during Orthodox Easter. An artillery shell hit a pile of stones in the family’s compound that then ricocheted in the boy’s direction. When his 60-year-old father, Gebru Welde Abrha, saw the wound in the boy’s left hand, he knew it would have to be cut off.

“I am so sad I can’t explain it,” the father said in a hospital ward, as his son looked angrily into the distance. “I feel it deeply.”

Haftom Gebretsadik, a 17-year-old from Freweini near Hawzen, also was wounded by an artillery round that struck his home in March. He quietly looked at the stump on his right arm and shook his head. 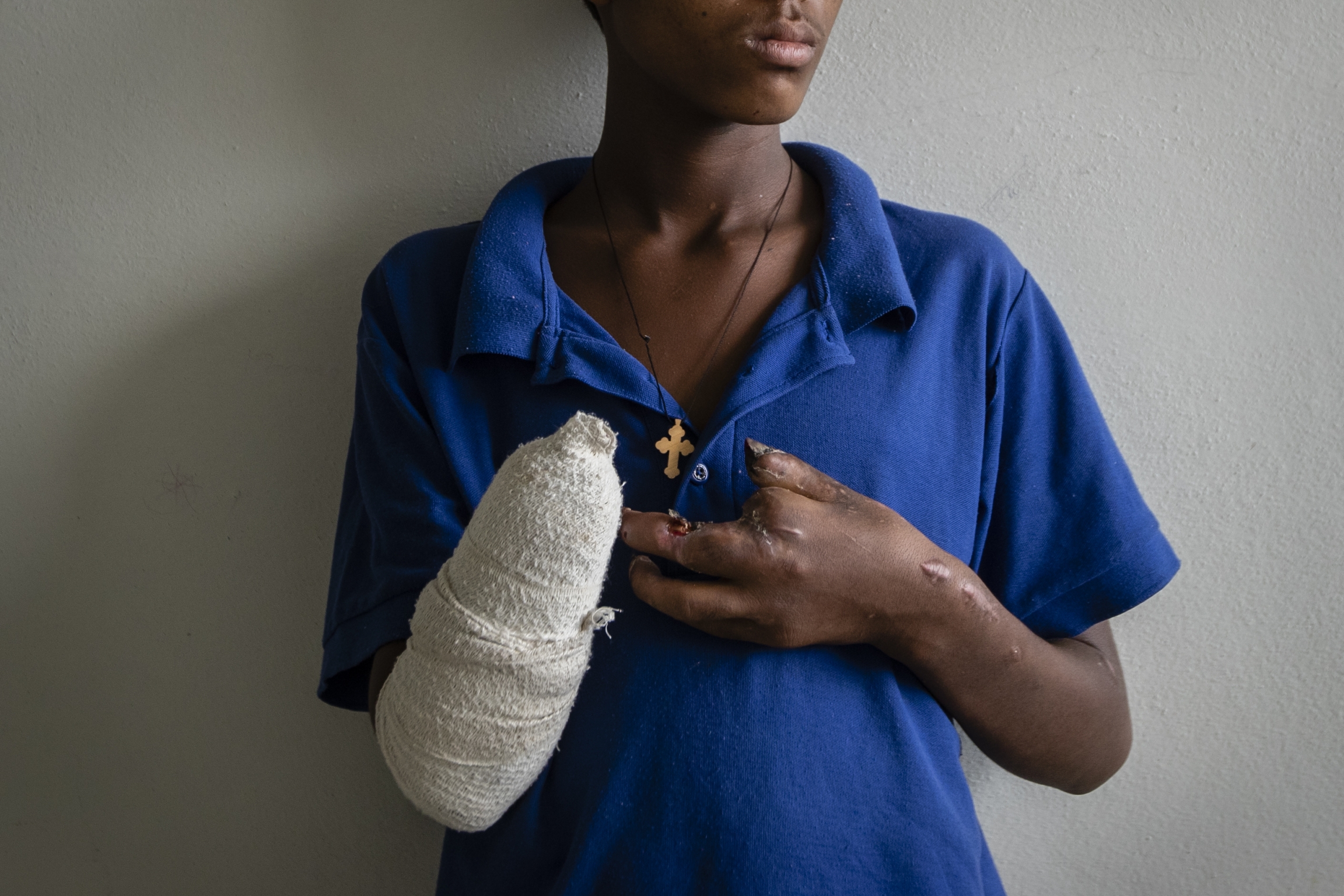 Haftom Gebretsadik, a 17-year-old from Freweini near Hawzen who had his right hand amputated and lost fingers on his left after an artillery round struck his home in March, sits on his bed at the Ayder Referral Hospital in Mekele, in the Tigray region of northern Ethiopia, on Thursday, May 6, 2021. “I am very worried,” he says. “How can I work?”

Some of the young victims of blast trauma may have kept their limbs if they had received first aid at the nearest health centers. But such facilities are shells right now — systematically looted, vandalized and turned upside down.

Eritrean soldiers set up camp in the Hawzen Primary Hospital, which once boasted of equipment ranging from X-ray machines to baby incubators. Now it is trashed and looted, and heaps of stones litter the compound where fighters had set up defensive positions.

“It’s a bad feeling I have as a Tigrayan,” said the now-jobless technician, 27-year-old Misigna Hagos. “This hospital used to serve thousands of people…. Now it’s destroyed.” 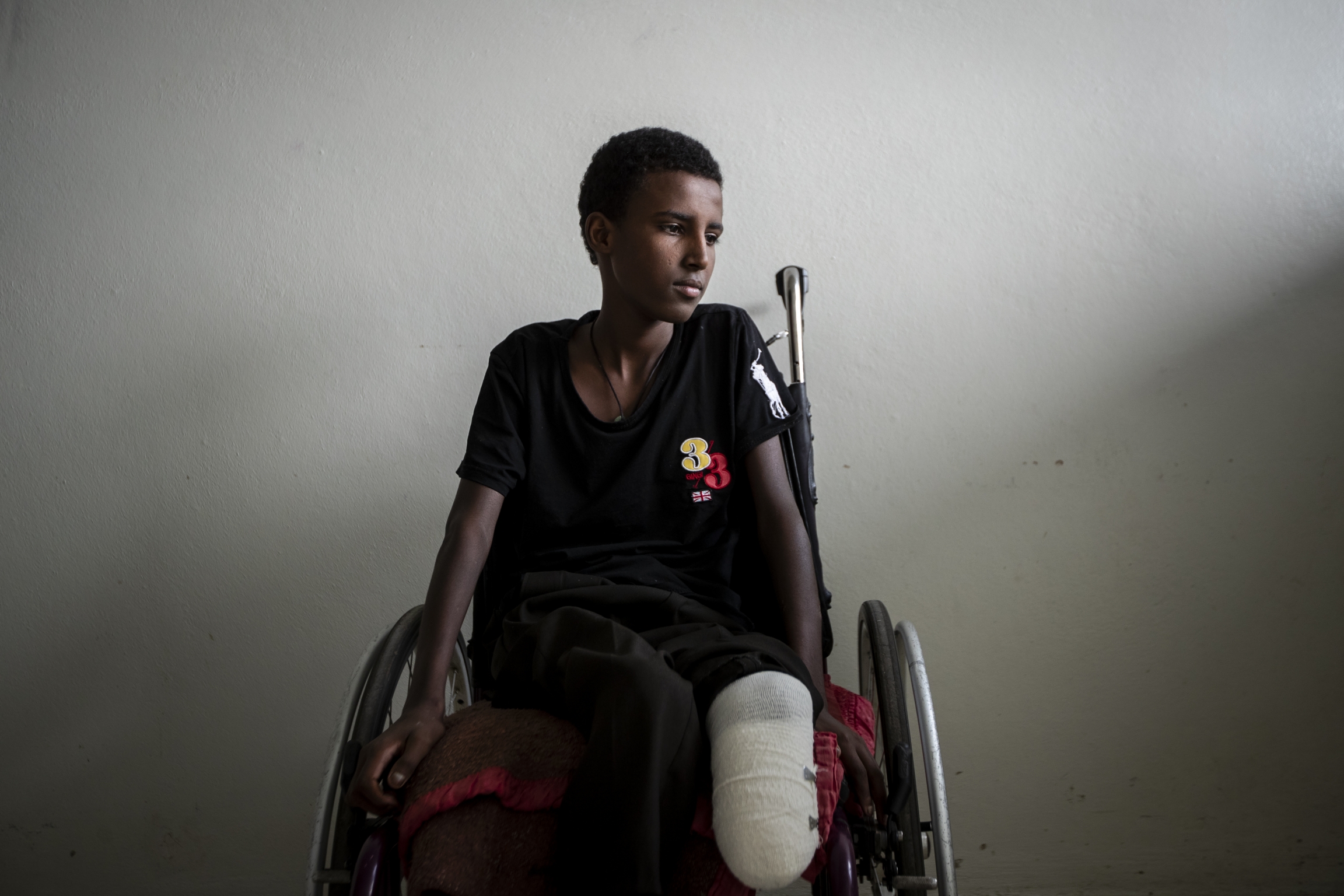 Mikiele Kahsay, 16, sits in a wheelchair at the Ayder Referral Hospital in Mekele, in the Tigray region of northern Ethiopia, on Thursday, May 6, 2021. The teenager was wounded when a shell landed near him as he was kicking a ball at a school field in Bizet. His leg had to be amputated because he was unable to get to hospital for four days, and gangrene set in.

Many Tigrayans from contested towns like Hawzen end up in camps for the internally displaced in Mekele, mostly women and children. Abriha Redae fled Hawzen in December along with a group of others. Her father had been killed in recent fighting in the town.

“In Hawzen every time the soldiers entered, we went out to go to other places and hide. ... Our life is changing and miserable now.”

“In Hawzen every time the soldiers entered, we went out to go to other places and hide,” she said. “Our life is changing and miserable now.”

Asked if she supported the Tigrayan fighters, her voice quickened. 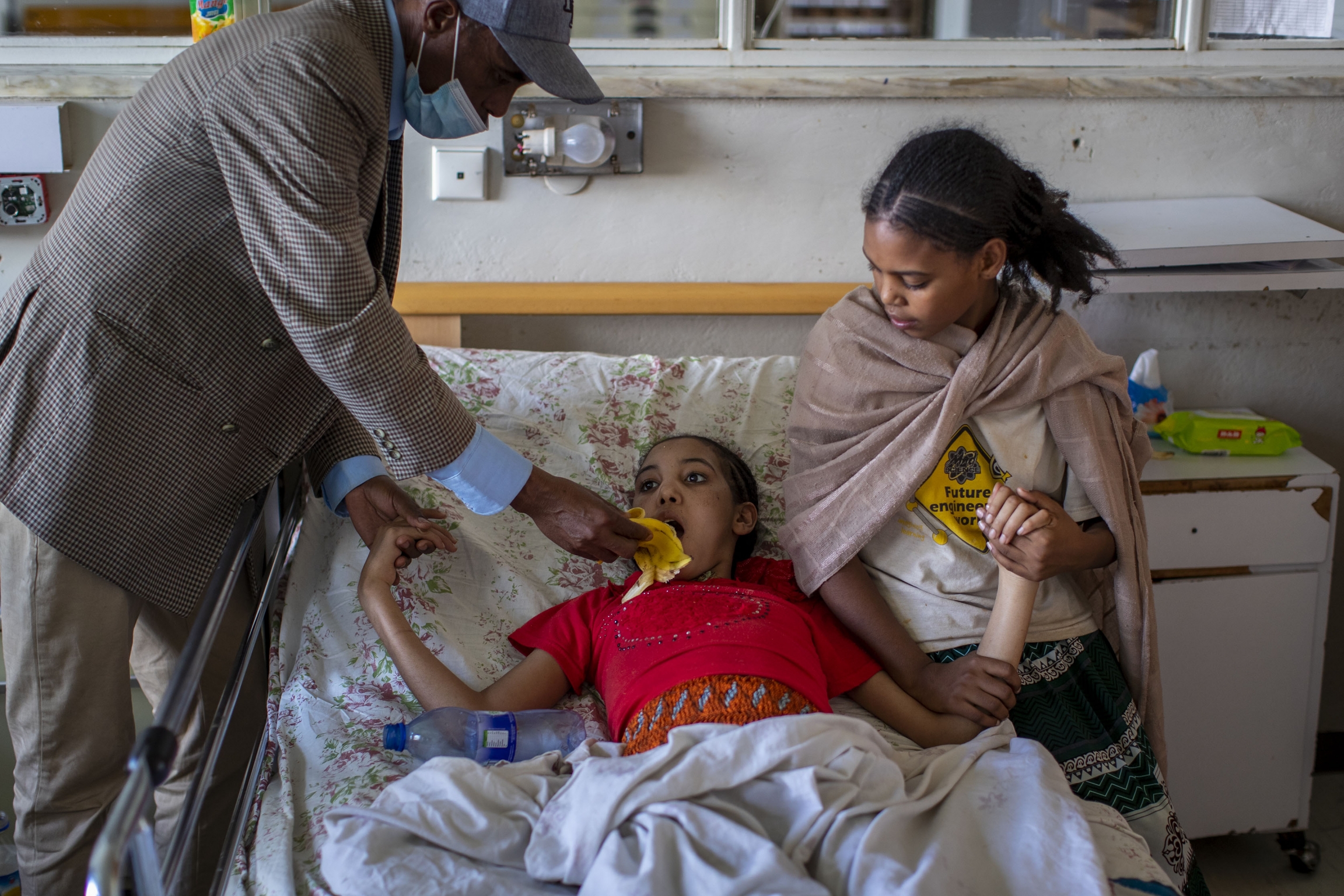 Akhberet Tadesa, 15, who is unable to feed herself and hasn't spoken or walked unaided since a shell exploding near her home left her in an apparent state of mental shock, is aided by her father Tadese Gebremedhin, left, and sister Fana, 13, right, at the Ayder Referral Hospital in Mekele, in the Tigray region of northern Ethiopia, on Thursday, May 6, 2021. As the Tigray People’s Liberation Front and the government forces fight, civilians, and especially children, are suffering heavily.

And so the fight continues. The day after visiting Hawzen, AP journalists driving north were told by an officer at a military checkpoint in the town of Agula to turn back for their own safety. Explosions from shelling could be heard in the distance.

It was Hawzen. Government troops were taking it back.

This story was funded by a grant from the Pulitzer Center on Crisis Reporting via Associated Press.