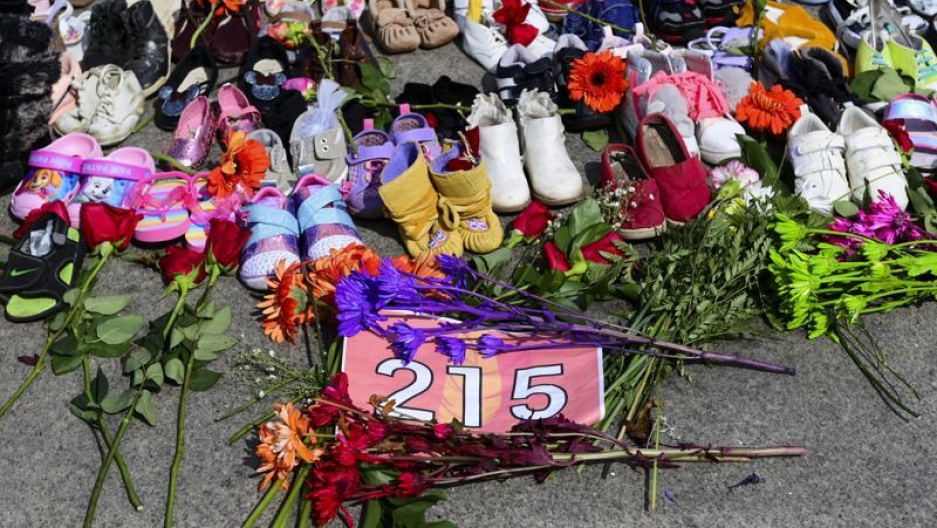 Flowers, children's shoes and other items rest at a memorial at the Eternal Flame on Parliament Hill in Ottawa on June 1, 2021, in recognition of the discovery of children's remains at the site of a former residential school in Kamloops, British Columbia.

Roberta Hill was just a child when she and five of her six siblings were forced to attend a residential school in Canada.

Now 70, Hill was shocked by the recent, gruesome discovery of the remains of 215 children buried on the grounds of the Kamloops Indian Residential School in British Columbia, according to a statement from Tk’emlúps te Secwépemc First Nation.

“How could you not know that 215 people are in the ground?”

“How could you not know that 215 people are in the ground?” Hill asked. “So, when the parents are saying, ‘I didn’t get my child back, I want to know where my kid is,’ OK — for 215 children, who’s accountable?”

Now, Hill and other advocates are calling for a mass investigation into other missing children from Canada’s residential schools as the nation reckons with its history of cultural genocide against Indigenous Peoples of Canada.

Recently, Canadian Prime Minister Justin Trudeau called for increased support for survivors of the nation’s residential school system and ordered flags to half-staff at all of Canada’s federal buildings.

Hundreds of pairs of shoes line the steps of those same buildings and cover monuments nationwide in honor of the children who perished at the Kamloops school. None of the deaths were ever documented.

“Sadly, this is not an exception or an isolated incident,” Trudeau said. “We have to acknowledge the truth. Residential schools were a reality.”

As a survivor, Hill shared her experiences with Canada’s Truth and Reconciliation Commission that convened in 2008, in part, to create a historic record of what Canada’s Indigenous children endured.

Hill and her siblings attended the Mohawk Institute, a residential school run by the Anglican Church of Canada in Brantford. She said she was sexually abused between the ages of 6 and 10.

“Even though it’s so sad and heartbreaking, it really isn’t surprising,” she said. “And I think there’ll be more if people go looking.”

Hill, and many First Nations, including the Six Nations of Grand River First Nation, are eager for a major investigation into missing children to begin.

The role of the church

It’s unclear when the recently discovered bodies in Kamloops were buried.

The Canadian government took over residential schools in 1969. The Kamloops school closed in 1978.

Before the government took over, most schools were operated by various churches. The Anglican Church of Canada issued an apology for its role in Canada’s residential school system in 1993. A year later, the Presbyterians apologized. So have the Methodists and the United Church of Canada.

“There’s no question that the church was involved with this."

“There’s no question that the church was involved with this,” said Rev. Larry Lynn, a priest with the Catholic Archdiocese of Vancouver. “The church was in charge of that institution.”

Prime Minister Trudeau requested an apology from Pope Francis during a visit to the Vatican in 2017. Among the 94 calls to action in the TRC’s final report is a request for an official apology from the head of the Catholic Church.

While local bishops have been apologetic, the pope has refused.

On June 2, Archbishop Michael Miller released a statement on behalf of the Vancouver Archdiocese, reflecting on a 2013 public apology he made before the TRC.

“If words of apology for such unspeakable deeds are to bring life and healing, they must be accompanied by tangible actions that foster the full disclosure of the truth,” Miller said.

The archbishop has also offered mental health and counseling support to families who lost children. The archdiocese is providing financial assistance and experts to help with an investigation to identify the deceased in Kamloops.

“They absolutely should be [identified] and even posthumously if necessary, and probably it is necessary,” Rev. Lynn said.

He said that any clergy members involved should be held accountable.

“In many respects, this is a crime scene,” said Mary Ellen Turpel-Lafond, a law professor at the University of British Columbia, and the director of the Residential School History and Dialogue Center.

Turpel-Lafond urged for the collection of proper evidence and underscored the importance of Canada’s willingness to confront these crimes head-on.

“Canada can’t just walk away and say we have nothing to do with it,” she said. “Canada has no choice but to respond.”

Eyes are also watching this case from the US. Between 1869 and the 1960s, the US funded more than 350 Indian boarding schools and allowed churches to run them.

Stories from American survivors are similar to those from Canada, including torture, sexual and phyiscal abuse and starvation.

“Here in the US, we absolutely need a truth commission — with an emphasis on truth."

“Here in the US, we absolutely need a truth commission — with an emphasis on truth,” said Christine McCleave, chief executive officer for the National Native American Boarding School Healing Coalition. “We absolutely need the federal government to step up and disclose the harm done.”

She said the US federal government and churches were not only complicit but participatory in the atrocities that took place at schools throughout the US and Canada.

McCleave’s organization is working toward an American version of Canada’s national TRC.

A bill was introduced in the US House last year, but it did not move forward.

Hill believes many secrets haven’t been revealed yet. With the truth from the Kamloops school now in plain view, she hopes it won’t take too long to find out.