Peace Arch, a six-story-high concrete monument straddling the 49th parallel that separates Blaine, Washington, from Surrey, British Columbia, stands as a symbol of the US and Canada's historically cooperative relationship — as evident by two iron gates swung open inside the arch.

“May these gates never be closed,” an engraving reads.

But that diplomatic sentiment rings hollow for many cross-border couples whose relationships have been stymied for more than a year because of tightened border restrictions imposed by the US and Canada in response to the COVID-19 pandemic. 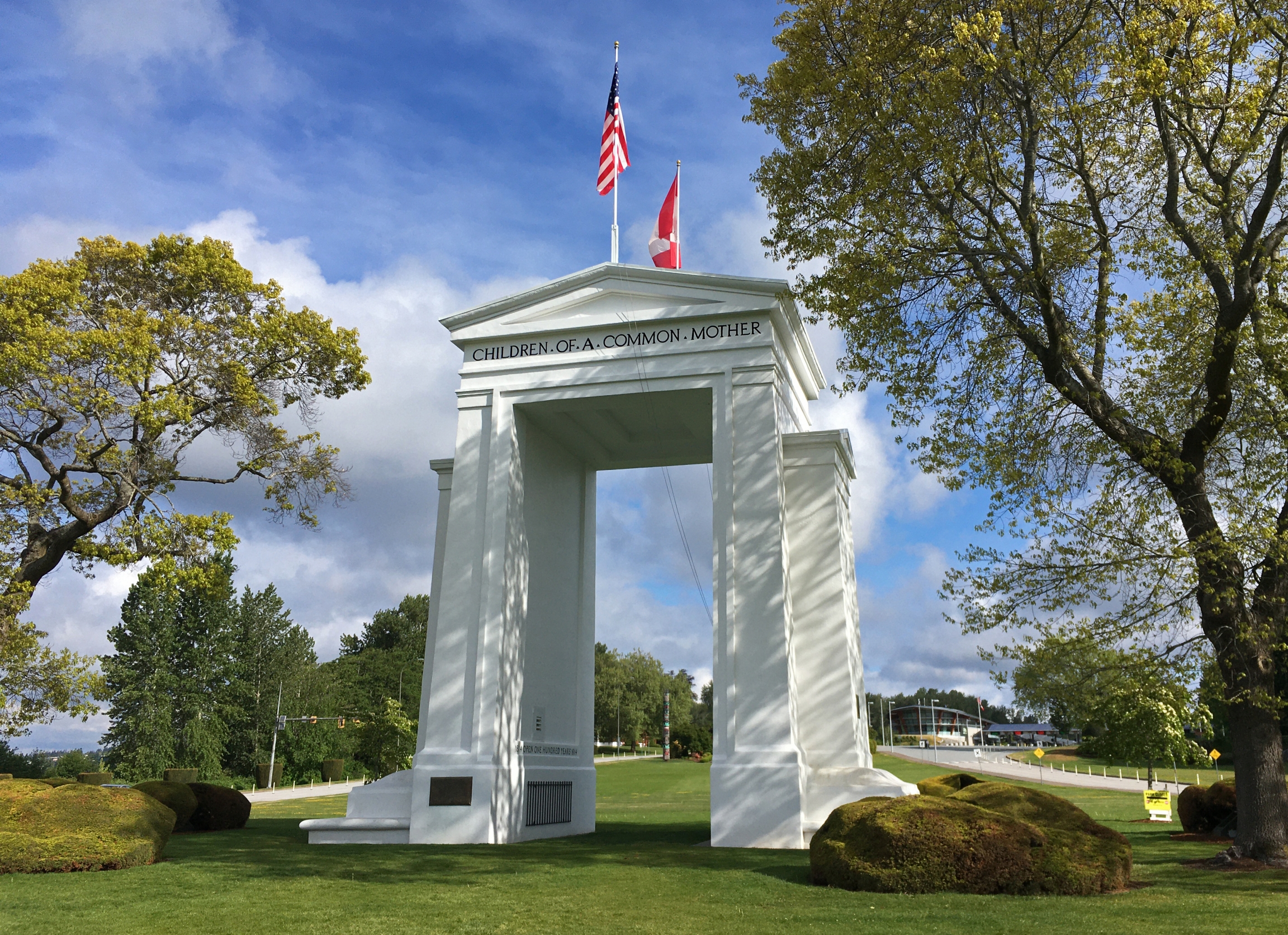 She and her wife, Katrina Gurr, of Port Moody, British Columbia, regularly visit each other at Peace Arch Park, owing to a long-standing agreement between the US and Canada that allows citizens of both countries to cross the border, so long as they stay inside the park. (However, the pandemic prompted Canada to close its side of the park, leaving only the US side open.)

Here, the normal rules don't apply: There is no border checkpoint to enter the park. And when Canadians return home, they don't have to follow their country's otherwise mandatory two-week quarantine.

Although Canada offers exemptions for noncitizen family members to visit their loved ones in Canada, the quarantine policy effectively keeps many out of the country.

“Who can take two weeks off work?” said Alexis Gurr, whose job as a hotel restaurant manager does not offer paid vacation time.

As a result, she has only driven to Canada once since the two got married last summer in Washington state: “I'd go up a lot more if I had the money and the resources to do so.”

“There's just no end in sight, which makes it difficult to plan our lives.”

“There's just no end in sight, which makes it difficult to plan our lives,” said Katrina Gurr, who is trying to get a green card to live in the US.

But the immigration process has slowed down during the pandemic. And so have talks between the two countries, said Western Washington University professor Edward Alden, who studies US-Canada relations.

“There's been no evidence of serious cross-border cooperation, cost-benefit calculations, the development of metrics to allow some sorts of gradual reopening,” Alden said. “I have been truly shocked by the lack of cooperation.”

Not since the War of 1812 has the border been this restricted, according to Alden.

“The United States and Canada have spent basically the last half-century building a closer and closer cross-border system of cooperation, from the Auto Pact to the free trade agreements to all sorts of arrangements to share information to protect against terrorism and criminal activity,” he said. 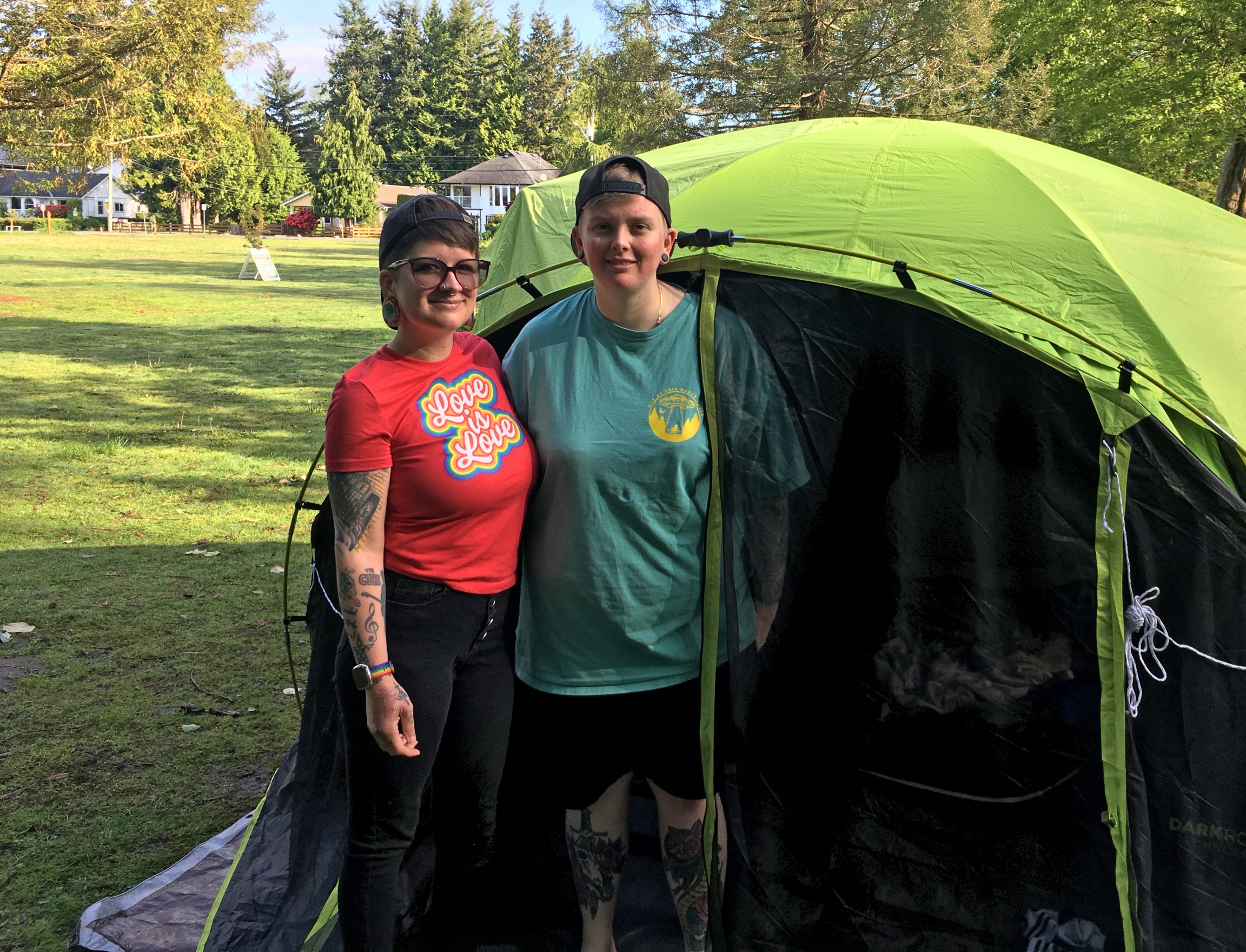 Alexis Gurr (left), of Everett, Washington, and her wife, Katrina Gurr, of Port Moody, British Columbia, pose outside their tent on the US side of Peace Arch Park.

“And to see the complete breakdown of border cooperation in this context has been truly shocking. I think it's created a fairly significant rift between the two countries that is going to be hard to repair.”

It's not just the quarantine requirement in Canada that's causing headaches for families. Because of the pandemic, the US land border is closed, with no exemptions for most families.

That's been a problem for Devon Weber, a US citizen who lives with her toddler son and Canadian husband in Montreal. Her family lives in New York City.

“God forbid something happened with my parents,” Weber said. “They're in their 70s. My husband couldn't drive down with us to deal with that, and it terrifies me. If a Canadian can fly into the United States, for any reason, with a negative COVID test to just go on vacation at Disney World, my husband should be able to cross the land border in our own private vehicle to see our family.”

The US Department of Homeland Security declined to comment on whether there are any plans in the works to reopen the land border. A spokesperson for the Public Health Agency of Canada said in a statement that Canada is exploring quarantine exemptions for vaccinated foreign nationals, but that for now, the current restrictions will remain in place.

Both countries' restrictions are set to expire on June 22. That may seem like just around the corner, but because the restrictions have been extended on a monthly basis 14 times already, many cross-border families are left wondering when life will return to normal.

The Gurrs, who have spent their entire marriage under the pandemic, wonder when they'll get to experience normal for the first time.

“Hopefully, within the next month or two, they have some sort of change,” Alexis Gurr said. “Otherwise, it's going to be another [obscenity] summer at the park.”