This came on the heels of a wave of violent attacks on a Yanomami Indigenous community in northern Brazil, highlighting the disastrous impact of illegal mining for gold in Brazil.

Earlier this month, a video of illegal miners shooting at unarmed residents of a Yanomami village in northern Brazil went viral over Twitter.

In the video, a group of Indigenous women line a hillside. Suddenly shots are fired from a speedboat rushing by on the river below. The women run, carrying babies and pulling along small children. They race off camera toward the trees.

According to reports, the Yanomami responded, firing bows and arrows and shotguns, and wounding several of the attackers. Two children died by drowning during the confusion. Out of fear, many slept in the forest, catching pneumonia. 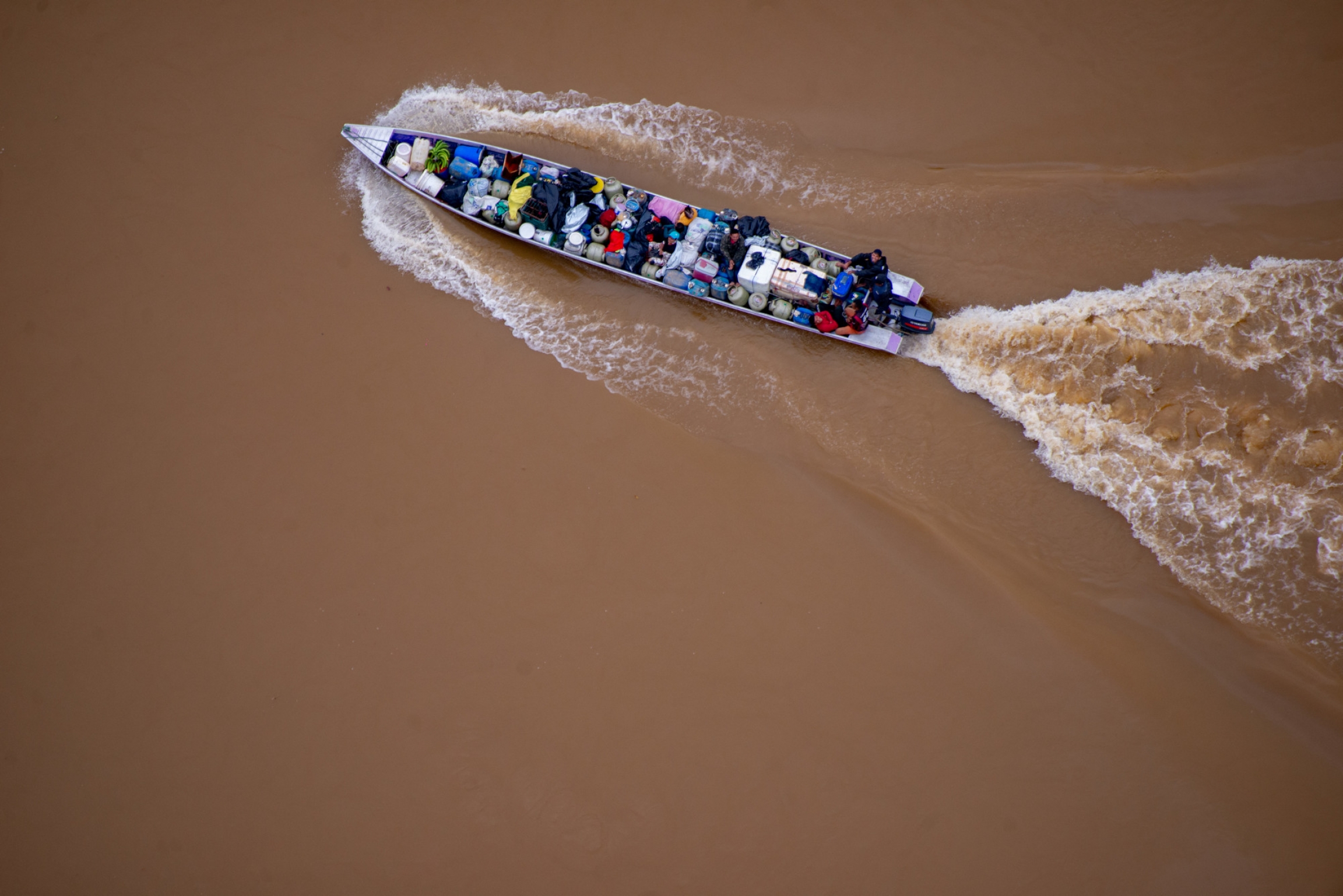 'We just want to live in peace'

The community of Palimiú, where the Yanomami live, is on the banks of the Uraricoera River, along a major route used by illegal miners to reach their mining camps.

Attacks like this have rippled on for days. On May 16, miners in 15 boats fired on the community and threw tear gas bombs.

It’s part of a years-long trend. According to a recent report from the Hutukara Yanomami Association, mining on Yanomami territory grew by 30% in 2020, with nearly 6,000 acres of land deforested.

Images of mining areas there show a wasteland of cleared forest and contaminated pits.

Many blame the government of far-right president Jair Bolsonaro for encouraging illegal mining in the Amazon.

When federal police investigated this month’s attack on the Yanomami village, they also came under fire and responded with their own shots.

“We are very sad. We are angry,” said village leader Tomóteo Palimitheri in a video shared by the media outlet Amazônia Real. He holds a spear and stands in front of a group of village warriors at the banks of the river. “The miners are attacking us day and night,” he said. We just want to live in peace.”

Roughly 29,000 Yanomami and Yekauana people live on Yanomami land in northern Brazil — near the border with Venezuela — according to the Hutukara association, which represents more than 370 communities of the two groups there. It’s the largest Indigenous territory in the country. And it’s under attack.

“In our territory there are more than 20,000 miners, today. This is a threat to the life of the forest, a threat to the lives of people who live in their villages, children, women and [the] elderly,” said Dário Kopenawa, vice president of the Hutukara association.

“Mining kills. It murders people. It destroys the life of Mother Earth.” 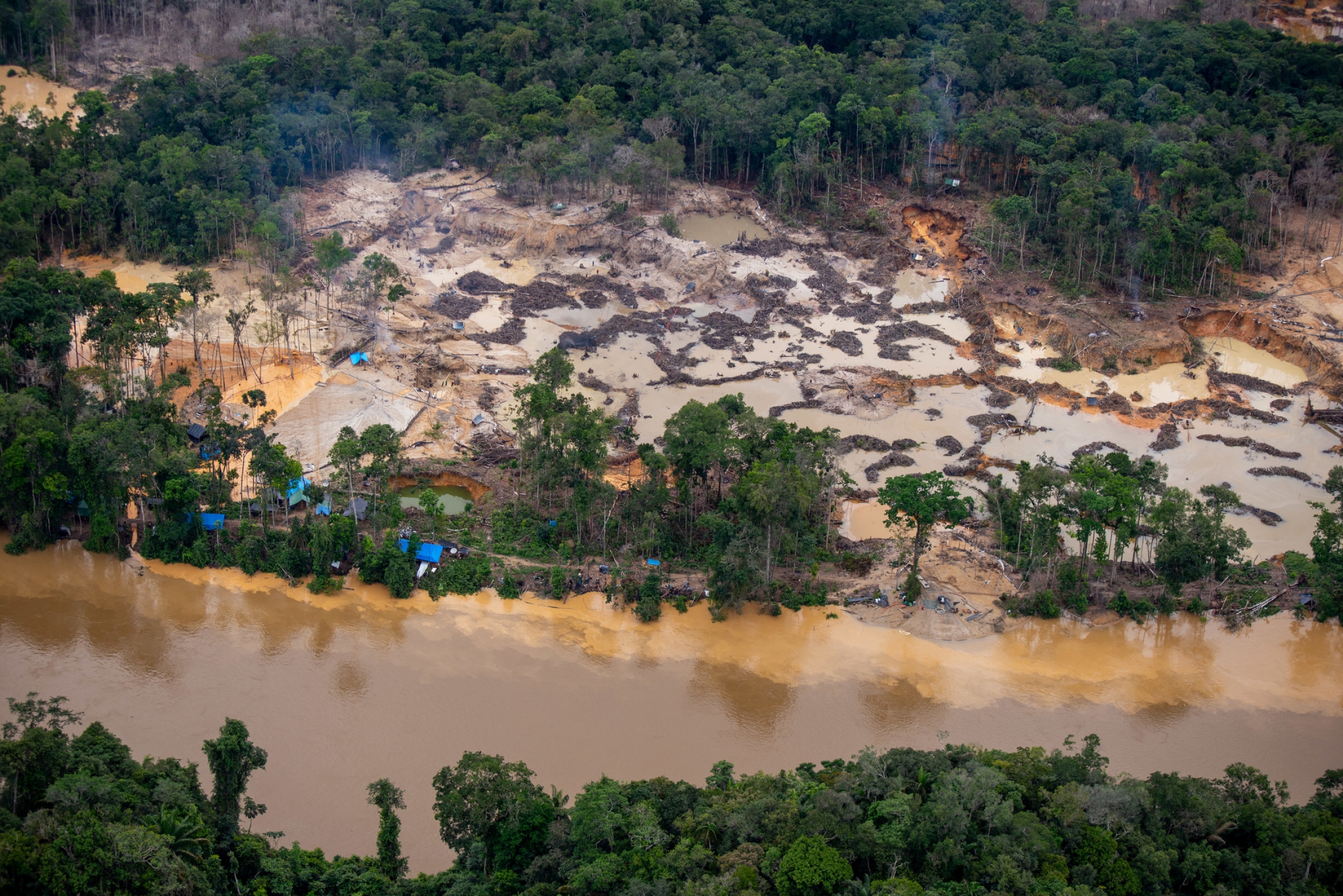 Wildcat mining along the Uraricoera River, in Yanomami Territory.

When The World spoke with Kopenawa last year, he had just met with Brazilian Vice President Hamilton Mourão to demand that the miners be removed from their territory.

The Yanomami had launched a petition and an international campaign. The Supreme Court had even ordered the government to create a plan of action.

“The worrying thing that goes a lot with this wildcat mining — apart from all the social and environmental impacts on Indigenous peoples, like the way they bring in diseases like COVID-19 or malaria — is also the contamination that comes with it. There are very high levels of mercury pollution in many communities, and this is like a silent killer disease, because it’s not obvious."

“The worrying thing that goes a lot with this wildcat mining — apart from all the social and environmental impacts on Indigenous peoples, like the way they bring in diseases like COVID-19 or malaria — is also the contamination that comes with it. There are very high levels of mercury pollution in many communities, and this is like a silent killer disease, because it’s not obvious,” said Fiona Watson, research director of Survival International, a UK-based nongovernmental organization that works with Indigenous communities in Brazil. 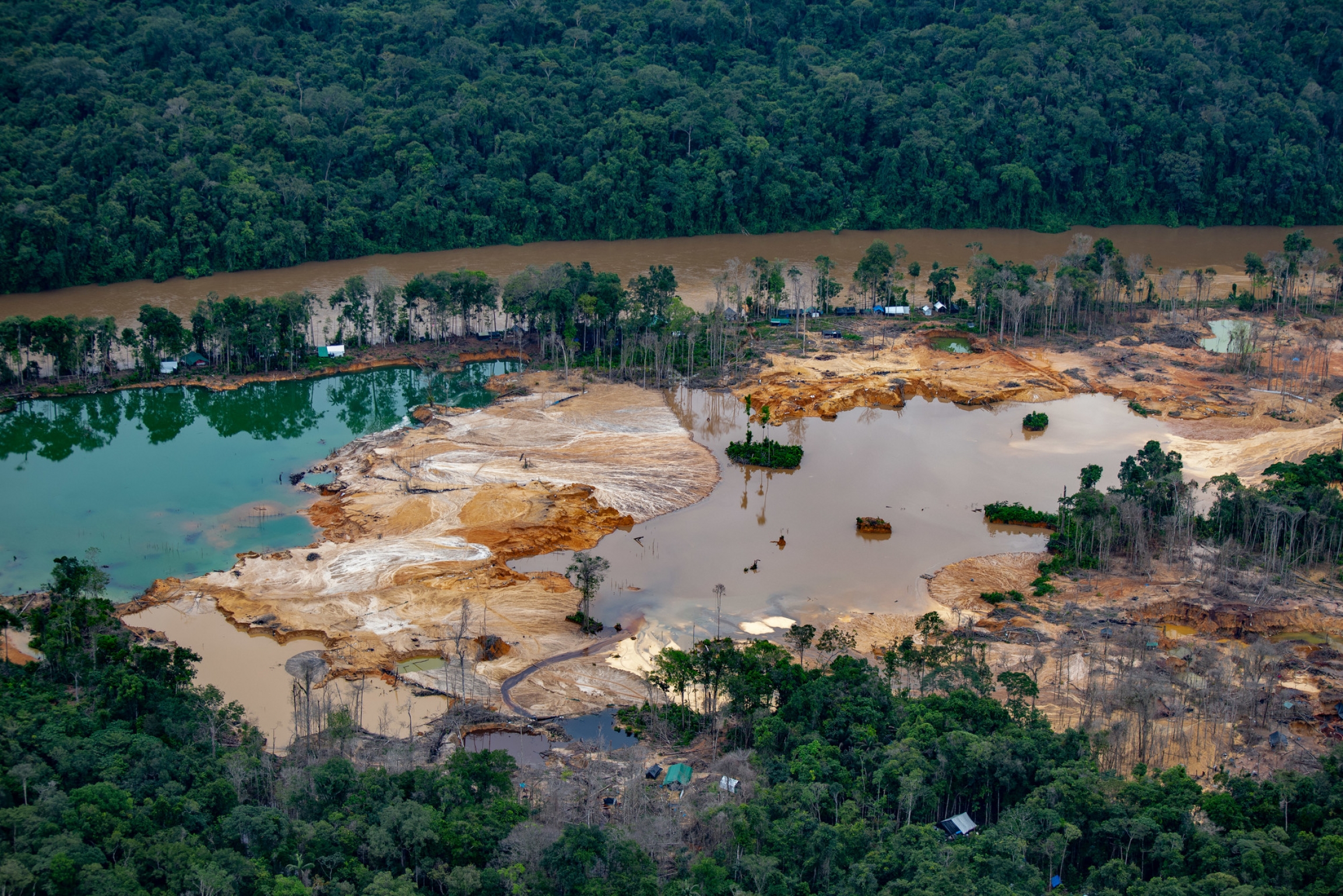 Last week, the Yanomami, together with Brazil’s largest Indigenous organization, APIB, formally requested that the Supreme Court take action to force the Brazilian government to finally remove illegal miners from seven Indigenous territories, including the Yanomami.

“The government has still not delivered concrete measures, and that is why we are again demanding that it is necessary to use all of the state apparatus, the environmental protection agency, police and everyone, to remove the miners,” said Samara Pataxó, an Indigenous legal adviser to the group, during a press conference held online.

“It needs to happen now and not continue to drag the communities through all of this, as if the pandemic and the attacks were not happening and taking lives.”

“Enough of the genocide. Enough of the massacre. ... Enough of destroying our rivers and killing our forest. You need to leave. We are from here. We live here. We can’t leave and we won’t leave..."

“Enough of the genocide. Enough of the massacre,” said Alessandra Korap, a leader of the Munduruku people, whose land near the Tapajos river has also been devastated by illegal mining in recent years.

“Enough of destroying our rivers and killing our forest. You need to leave. We are from here. We live here. We can’t leave and we won’t leave. The Supreme Court needs to do something urgently.”

On Monday, it did.

Supreme Court judge Luis Barroso responded to the request from Native groups and ordered the federal government to “immediately adopt all the necessary measures to protect the life and security of the Indigenous populations living in Yanomami and Munduruku territories, amid the violent attacks and threats from the land invaders.”

He also ordered the government to remove illegal miners from their lands within 90 days — 30 days to develop a plan and 60 days to implement it.

“The presence of these invaders makes contagion from COVID-19 even worse, favored, also from the sickness of the population from malaria, the contamination from the mercury used in the mining, and other preexisting diseases,” Barroso wrote in his ruling.

This came after a federal judge in Roraima state, last week, also ordered the removal of illegal miners from Yanomami land, and imposed a daily fine of $188,000 if Brazilian authorities fail to follow through with a plan to protect Indigenous communities there within 20 days.

It is still unclear if and how the Bolsonaro government may respond, particularly as Bolsonaro has been actively working to open up protected land in the Amazon.

“The Bolsonaro government has been destroying everything that had been consolidated in environmental policy in the last four decades."

“The Bolsonaro government has been destroying everything that had been consolidated in environmental policy in the last four decades,” said Suely Araújo, a senior public policy specialist at the Climate Observatory and the former head of Brazil’s Environmental Protection Agency IBAMA.

“Bolsonaro softened his speech at Biden’s climate summit, but he has no intention of changing the way he acts in relation to environmental protection,” said Araújo. “His world view is that economic growth demands deforestation and environmental destruction.” 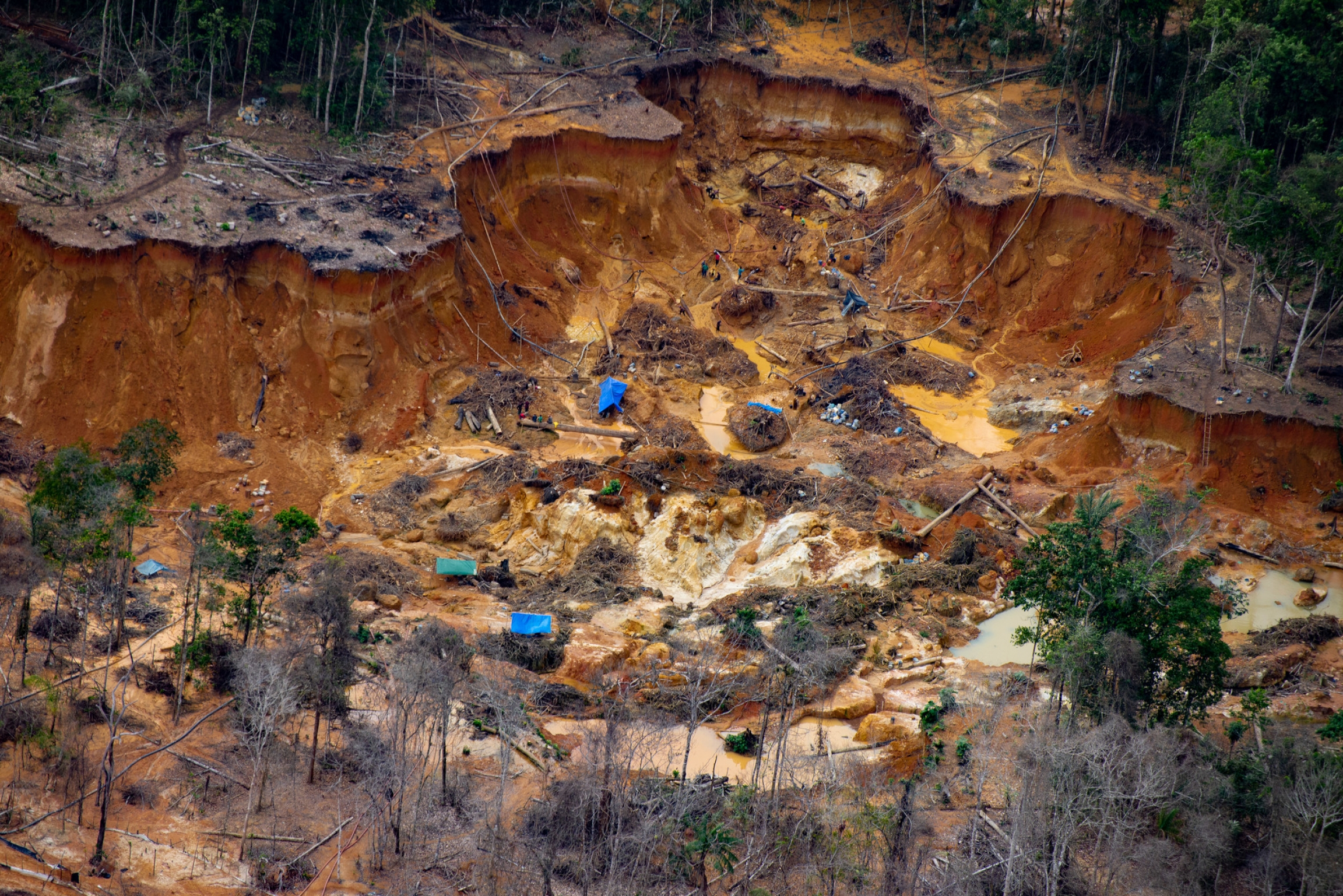 An illegal mining site in the Uraricoera River area of Yanomami land.

Bolsonaro’s government is pushing several pieces of environmental legislation in Congress that, if approved, could be devastating for Indigenous communities. Among them is a bill that would authorize mining in Indigenous territories.

“This is potentially a scenario of Armageddon, completely catastrophic, if that happens,” said Watson with Survival International.

“The case of the Yanomami is a very good example of just how dangerous this mining is. It’s out of control in Yanomami territory. The government has let it get like that, particularly now under Bolsonaro, because he’s green-lighting it and he has voiced his support for these gold miners.”