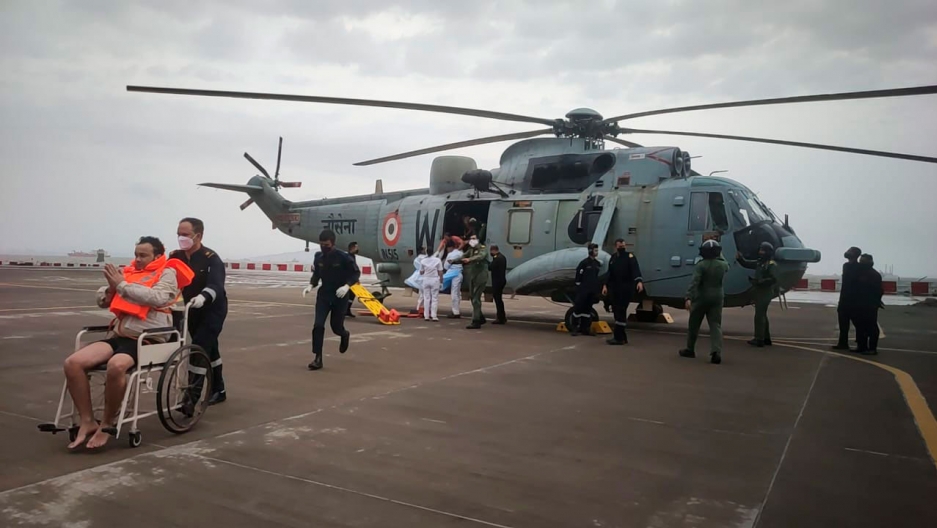 This photograph provided by Indian navy shows, one of the men rescued from the Arabian sea being brought for medical attention at naval air station INS Shikra in Mumbai, India, May 18, 2021.

Cyclone Tauktae, the most powerful storm to hit India's western Gujarat state in more than two decades, packed sustained winds of up to 130 miles per hour when it came ashore late Monday.

The Indian navy is working to rescue crew members from a sunken barge and a second cargo vessel that was adrift Tuesday off the coast of Mumbai after Tauktae struck.

The navy said it has rescued 177 of the 400 people on the two barges in the Arabia Sea. Three warships, maritime patrol aircraft and helicopters joined the rescue operations and were scouring the sea, the navy said.

Both barges were working for Oil and Natural Gas Corp., the largest crude oil and natural gas company in India.

The company said the barges were carrying personnel deployed for offshore drilling and their anchors gave away during the storm.

Four people have been killed in the wake of Cyclone Tauktae's landfall, raising the storm's total to 16.

In Maharashtra, six people were killed Monday but the state's capital, Mumbai, was largely spared from major damage even as heavy rains pounded the city's coastline and high winds whipped its skyscrapers. Over the weekend, the cyclone killed six people in Kerala, Karnataka and Goa states as it moved along the western coast.

The cyclone has weakened, but the India Meteorological Department forecast heavy rainfall for many parts of Gujarat and Maharashtra in the coming days.

Ahead of the cyclone, about 150,000 people were evacuated from low-lying areas in Maharashtra and Gujarat states. S.N. Pradhan, director of India's National Disaster Response Force, said social distancing norms were being followed in evacuation shelters and rescue teams were clearing debris from affected areas.

Both states, among the hardest hit by the coronavirus pandemic, had scrambled disaster response teams, fearing the storm could endanger India's fight against the virus with supply lines cut, roads destroyed and lockdown measures slowing relief work.

Tropical cyclones are less common in the Arabian Sea than on India's east coast and usually form later in the year. Experts say changing climate patterns have caused them to become more intense, rather than more frequent.

In May 2020, nearly 100 people died when Cyclone Amphan, the most powerful storm to hit eastern India in more than a decade, ravaged the region.