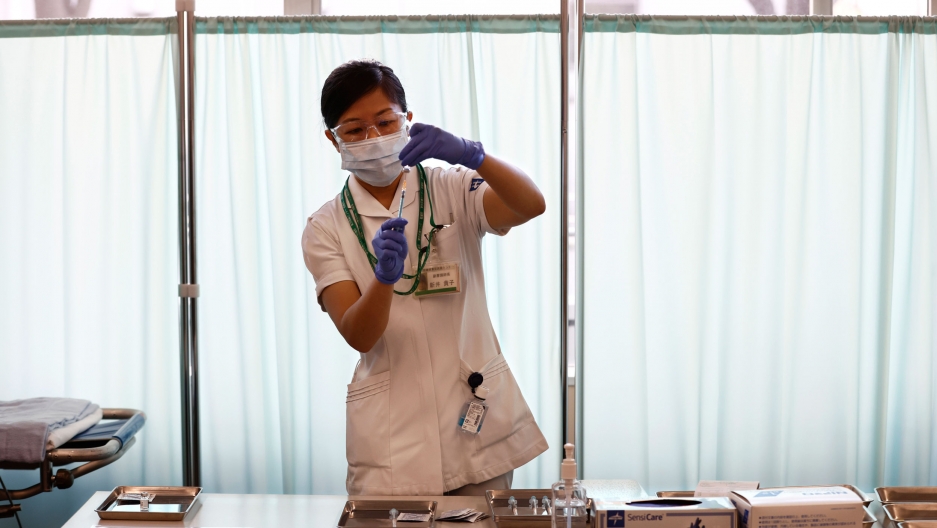 A medical worker fills a syringe with a dose of the Pfizer COVID-19 vaccine at Tokyo Medical Center in Tokyo, Japan, Feb. 17, 2021. Some wealthy nations that were most praised last year for controlling the coronavirus are now lagging far behind in getting their people vaccinated — and some, especially in Asia, are seeing COVID-19 cases grow.

Some wealthy nations are now lagging far behind in their vaccination campaigns after receiving early praise last year for controlling the coronavirus. And some countries, especially in Asia, are seeing COVID-19 cases grow.

In Japan, South Korea and New Zealand, the vaccination rates are languishing in the single figures. That is in sharp contrast to the US, where nearly half of all people have gotten at least one shot, and Britain and Israel, where rates are even higher.

Not only do those three Pacific countries rank worst among all developed nations in vaccinating against COVID-19, they also rank below many developing countries such as Brazil and India, according to national figures and the online scientific publication Our World in Data.

Australia, which isn't providing a full breakdown of its vaccination numbers, is also performing comparatively poorly, as are several other places initially considered standout successes in battling the virus, including Thailand, Vietnam and Taiwan.

That could change as vaccination campaigns gather pace and supplies loosen. But meanwhile, previously successful countries are being left exposed to the virus and face longer delays in reopening to the world.

Japan, for instance, has fully vaccinated only about 1% of its population and is facing a significant new outbreak just 10 weeks before it is to host the already delayed Olympic Games — although without spectators from abroad.

The government last week announced an extension of a state of emergency through the end of the month and confirmed more than 7,000 new cases on Saturday alone, the highest daily number since January.

Bureaucracy has been part of the problem. Countries that faced mounting death tolls from the virus often threw out the rulebook, rushing through emergency vaccine approvals and delaying second shots past the recommended timeline in order to maximize the number getting their first.

In Israel, Prime Minister Benjamin Netanyahu personally negotiated with Pfizer CEO Albert Bourla to get early access to vaccines, and called in the military to get them in people's arms. In the US, some groups handed out doughnuts, free drinks and even marijuana to get people to roll up their sleeves.

Japan went through a more traditional approval process that required an extra layer of clinical testing for vaccines that had already been tested elsewhere and were being widely used.

And once it did start getting shots, Japan faced a shortage of people to administer them. Under the conservative medical culture, people only trust doctors and nurses enough to do so.

Dentists are willing to help and are authorized, but have not been called upon. Getting shots from pharmacists at drug stores like in the US or from volunteers with no medical background other than a brief training like in Britain remains unthinkable in Japan.

New Zealand also went through its own approval process, finally giving a thumbs up to the Pfizer vaccine in February, two months after US regulators had approved it for emergency use.

COVID-19 Response Minister Chris Hipkins last year promised New Zealand would be "at the front of the queue" for vaccines. Now he says the issue is supply.

"We can't move any faster than we can get the vaccines into the country," Hipkins told The Associated Press.

Pfizer declined to discuss whether it could have supplied New Zealand any faster, referring questions back to the government.

Australia has faced its own set of issues. Its plans to use mainly Australian-made vaccines took a blow in December when development was halted on a promising candidate because it produced false-positive HIV results.

Then the European Union blocked a shipment of more than 250,000 AstraZeneca doses to Australia in March, considering the EU's needs greater. Australian regulators also switched from recommending the AstraZeneca vaccine to the Pfizer vaccine as their preferred option for people under age 50, slowing the rollout further.

In South Korea, government officials initially insisted on a wait-and-see approach with vaccines, saying the country's outbreak wasn't as dire as in America or Europe. But as transmissions worsened in recent months, public pressure mounted and officials sped up their negotiations with drug companies.

Worried about possible shortages, South Korea's Prime Minister Chung Sye-kyun and other officials began pointing fingers at measures taken by the US, Europe and India to tighten controls on vaccine exports to deal with large outbreaks at home.

Taiwan has given first shots to less than 1% of its population, after receiving just a fraction of the millions of doses it ordered. It has also been developing its own COVID-19 vaccine, which officials say will be available by the end of July under emergency use.

After it had effectively eliminated the virus, Taiwan this week raised its emergency preparedness and imposed crowd restrictions after finding new and unexplained cases in the community. President Tsai Ing-wen has called on people not to panic.

Helen Petousis-Harris, a vaccine expert at New Zealand's University of Auckland, said there were some advantages to taking a less frantic, more measured approach to vaccinating.

"It's much easier to commit yourself to something after you've seen it be used 100 million times," she said.

And having the luxury of sticking to the three-week schedule for second doses of the Pfizer vaccine will likely result in more people getting those shots, she added. Those facing lengthy waits for second doses were more likely to lose interest or move on with their lives.

Petousis-Harris said that New Zealand and many other wealthy countries that were slow to get going will likely see their vaccination rates rise quickly in the coming months as their campaigns swing into high gear.

By next year, she said, it will likely once again be developing nations that are left behind.