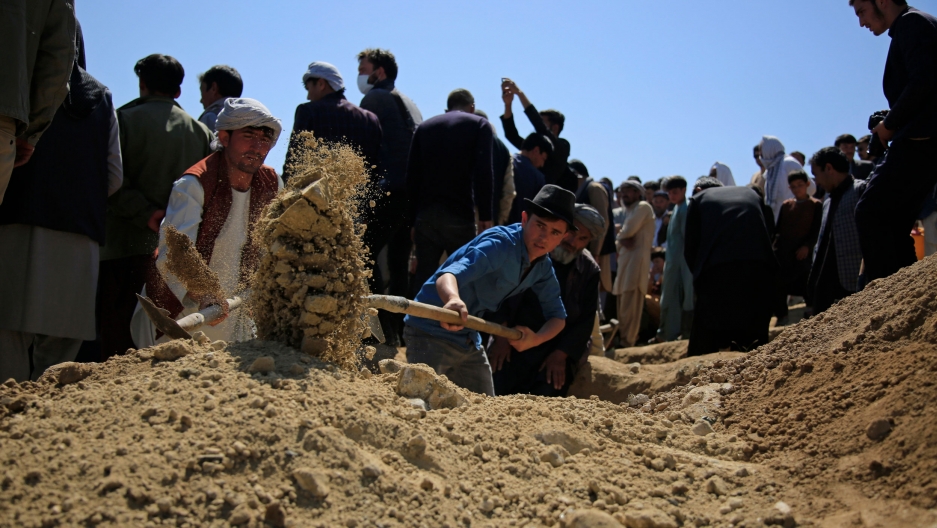 Afghan men bury a victim of deadly bombings on Saturday near a school, at a cemetery west of Kabul, Afghanistan, May 9, 2021.

Just hours after the Taliban on Monday announced a three-day cease-fire for the Muslim holiday of Eid al-Fitr, a roadside bombing killed 11 passengers on a bus in eastern Afghanistan — the latest in relentless violence that has gripped the country.

No one immediately claimed responsibility for the bombing. Responding to the cease-fire announcement, the government in Kabul — which has faced rising attacks as US and NATO troops pull out of Afghanistan — called for a permanent truce. A statement from the presidential palace chastised the Taliban for the increasing violence but said the government would also observe the holiday cease-fire.

The Taliban said the cease-fire would begin on either Wednesday or Thursday, depending on the sighting of the new moon that determines the start of the holiday.

The announcement comes amid heightened violence in the country and follows a brutal attack on a girls' school on Saturday in Kabul that killed as many 60 people, most of them students between 11 and 15 years old. The death toll from the attack still continues to climb.

The Taliban have denied responsibility for the attack, which occurred in a mostly Shiite neighborhood of Dasht-e-Barchi in western Kabul, where past attacks have been carried out by the Islamic State's affiliate in Afghanistan. Attacks in the area are most often claimed by the Islamic State group's affiliate in Afghanistan, but no group yet has claimed the attack on the school.

Just hours after the Taliban announcement, a bus in southern Zabul province struck a roadside bomb, according to Interior Ministry spokesman Tariq Arian. The explosion killed 11 and at least 24 more people on the bus were wounded. Improvised explosive devices litter the countryside and have been used extensively by the Taliban.

Taliban spokesman Suhail Shaheen said Taliban fighters have been ordered to stop all offensives, "to provide a peaceful and secure atmosphere to our compatriots ... so that they may celebrate this joyous occasion with a greater peace of mind."

The US and NATO are withdrawing the last of their military forces from Afghanistan. The final 2,500-3,500 American soldiers and roughly 7,000 allied NATO forces will leave by Sept. 11 at the latest.

Meanwhile, Pakistan's army chief, Gen. Qamar Javed Bajwa, was in Kabul on Monday although no details of his visit were immediately available.

Pakistan has been key to getting the Taliban to enter into peace talks with the Afghan government, as well as a deal that the insurgents signed with the US last year under former President Donald Trump. However, the Taliban-Afghan government negotiations have been in a stalemate for moths now, even as the US has sought to accelerate the pace of the talks.

However, the Afghan government has also complained about the presence of the Taliban leadership in southwestern Pakistan while Islamabad has expressed deep concern about the presence in Afghanistan of another violent militant group, the Pakistani Taliban, which is anti-Pakistan.

By Rahim Faiez and Kathy Gannon/AP