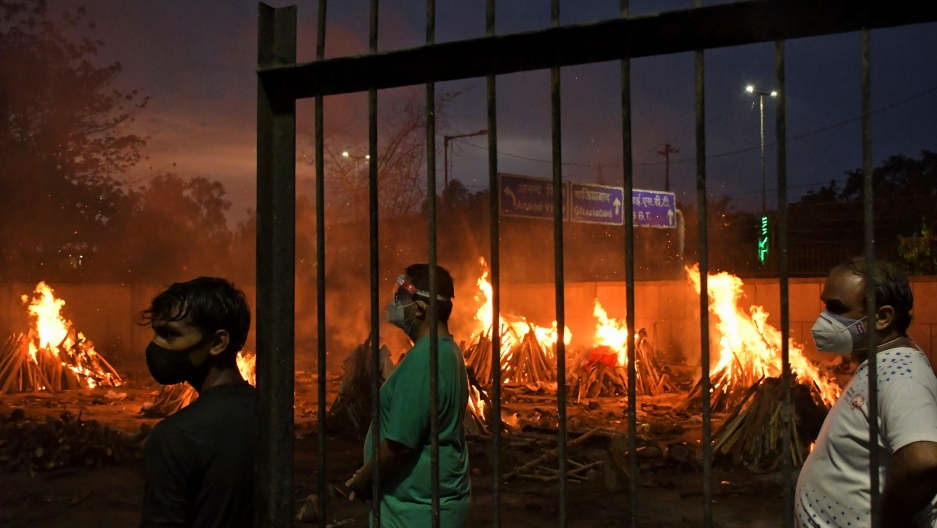 People watch burning funeral pyres of their relatives who died of COVID-19 in a ground that has been converted into a crematorium in New Delhi, India, May 6, 2021.

Medical experts, politicians and even Supreme Court judges are calling for national restrictions, pressuring Indian Prime Minister Narendra Modi to impose a nationwide lockdown, despite the economic pain it will exact, as a startling surge in coronavirus cases that has pummeled the country's health system shows no signs of abating.

Indian television stations broadcast images of patients lying on stretchers outside hospitals waiting to be admitted, with hospital beds and critical oxygen in short supply. People infected with COVID-19 in villages are being treated in makeshift outdoor clinics, with IV drips hanging from trees.

As deaths soar, crematoriums and burial grounds have been swamped with bodies, and relatives often wait hours to perform the last rites for their loved ones.

The situation is so dramatic that among those calling for a strict lockdown are merchants who know their businesses will be affected but see no other way out.

"Only if our health is good, will we be able to earn," said Aruna Ramjee, a florist in the southern Indian city of Bengaluru. "The lockdown will help everyone, and coronavirus spread will also come down."

The alarming picture has gripped the world's attention, just as many developed countries are seeing vaccinations drive down infections and are beginning to open up. India's surge has served as a warning to other countries with fragile health systems  — and also has weighed heavily on global efforts to end the pandemic since the country is a major vaccine producer but has been forced to delay exports of shots.

Infections have swelled in India since February in a disastrous turn blamed on more contagious variants as well as government decisions to allow massive crowds to gather for religious festivals and political rallies. On Friday India reported a new daily record of 414,188 confirmed cases and 3,915 additional deaths. The official daily death count has stayed over 3,000 for the past 10 days.

That brings the total to more than 21.4 million COVID-19 infections and over 234,000 deaths. Experts say even those dramatic tolls are undercounts.

Over the past month, nearly a dozen of India's 28 federal states have announced some restrictions, but they fall short of a nationwide lockdown imposed last year that experts credit with helping to contain the virus for a time. Those measures, which lasted two months, included stay-at-home orders, a ban on international and domestic flights and a suspension of passenger service on the nation's extensive rail system.

The government provided free wheat, rice and lentils to the poorest for nearly a year and also small cash payments, while Modi also vowed an economic relief package of more than $260 billion. But the lockdown, imposed on four hours' notice, also stranded tens of millions of migrant workers who were left jobless and fled to villages, with many dying along the way.

The national restrictions caused the economy to contract by a staggering 23% in the second quarter last year, though a strong recovery was under way before infections skyrocketed recently.

Some who remember last year's ordeal remain against a full lockdown.

"If I had to choose between dying of the virus and dying of hunger, I would choose the virus," said Shyam Mishra, a construction worker who was already forced to change jobs and start selling vegetables when a lockdown was imposed on the capital, New Delhi.

Modi has so far left the responsibility for fighting the virus in this current surge to poorly equipped state governments and faced accusations of doing too little. His government has countered that it is doing everything it can, amid a "once-in-a-century crisis."

Amid a shortage of oxygen, the Supreme Court has stepped in. It ordered the federal government to increase the supply of medical oxygen to New Delhi after 12 COVID-19 patients died last week after a hospital ran out of supplies for 80 minutes.

Three justices called on the government this week to impose a lockdown, including a ban on mass gatherings, in the "interest of public welfare."

Dr. Randeep Guleria, a government health expert, said he believes that a total lockdown is needed like last year, especially in areas where more than 10% of those tested have contracted COVID-19.

Rahul Gandhi, an opposition Congress party leader, in a letter to Modi on Friday, also demanded a total lockdown and government support to feed the poor, warning "the human cost will result in many more tragic consequences for our people."

As the world watches India with alarm, some outside of its borders have joined the calls. Dr. Anthony Fauci, the United States' top infectious disease expert, suggested that a complete shutdown in India may be needed for two to four weeks.

"As soon as the cases start coming down, you can vaccinate more people and get ahead of the trajectory of the outbreak of the pandemic," Fauci said in an interview with the Indian news channel CNN News18 on Thursday.

Still, Modi's policy of selected lockdowns is supported by some experts, including Vineeta Bal, a scientist at the National Institute of Immunology. She said different states have different needs, and local particularities need to be taken into account for any policy to work.

In most instances, in places where health infrastructure and expertise are good, localized restrictions at the level of a state, or even a district, are a better way to curb the spread of infections, said Bal. "A centrally mandated lockdown will just be inappropriate," she said.

Srinath Reddy, president of the Public Health Foundation of India, a public-private consultancy, acknowledged that the intensity of the pandemic was different in each state, but said a "coordinated countrywide strategy" was still needed.

According to Reddy, decisions need to be based on local conditions but should be closely coordinated, "like an orchestra which plays the same sheet music but with different instruments."

By Neha Mehrotra and Ashok Sharma/AP