At sunset, a young, Muslim man with a microphone leads the traditional call to prayer.

Thursday marks the 24th day of Ramadan, the Muslim holy month of praying and fasting. The traditional dinner at nightfall each day is called iftar. It’s usually a chance for friends and family to break fast together. But in Spain, mosques can’t host this year.

Spain's COVID-19 group-dining rules have hobbled restaurants across the country. Spain’s Islamic authorities also recommend that observers limit the time they spend in places of worship to curb the spread of the coronavirus.

The country recorded 2,757 COVID-19 deaths in April, the lowest monthly figure since last September, though some regions were hit hard by the third wave of the coronavirus and saw an uptick, according to El País.

As a result, many of the country’s 2 million Muslims are celebrating iftar alone. But an unlikely ally has emerged to keep the festive tradition alive, at least for some in Barcelona’s Old City: Santa Ana Church, which has a courtyard that accommodates COVID-19 rules. 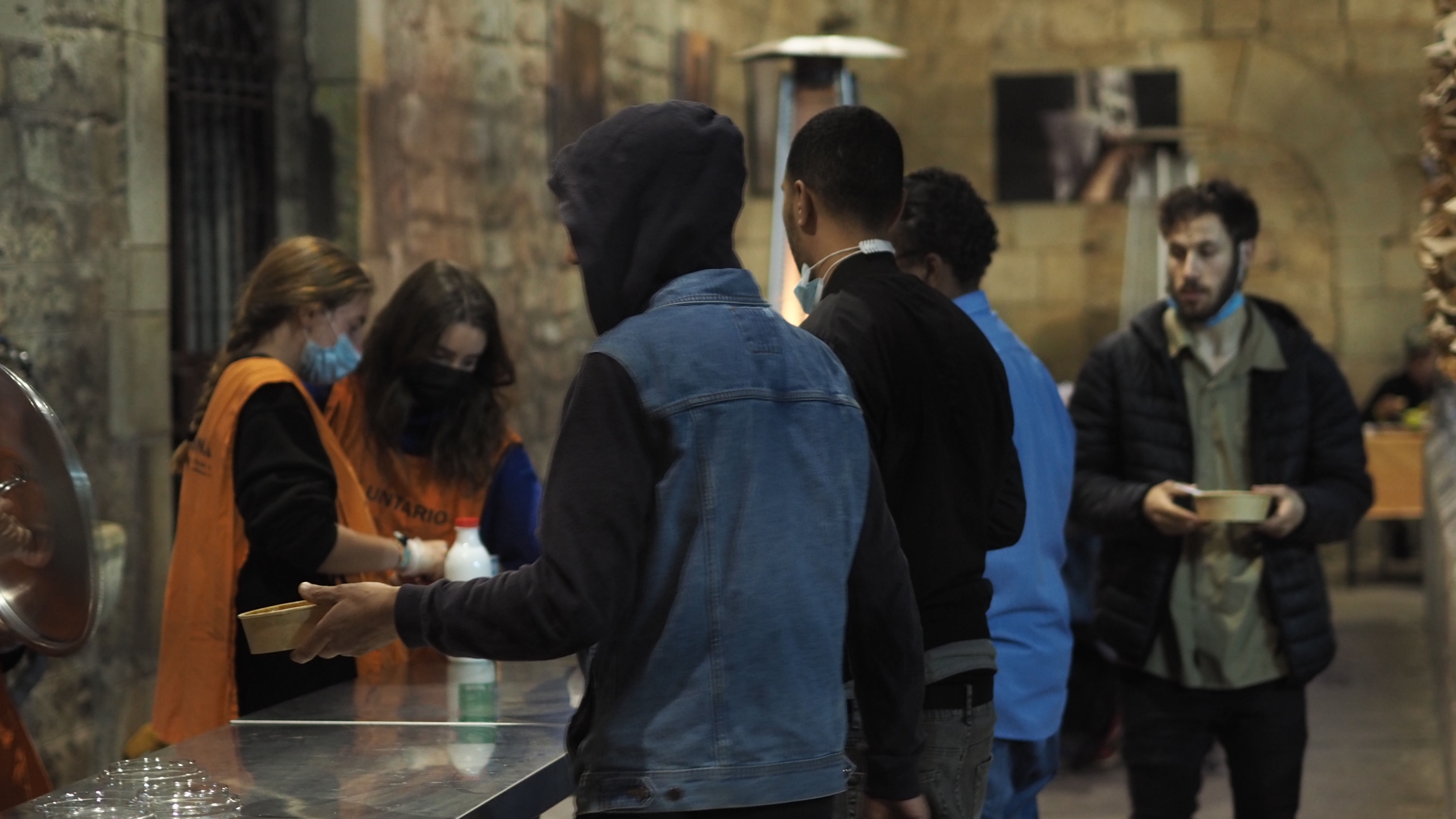 About 60 men show up each night for the traditional iftar meal during Ramadan being hosted by the Santa Anna Church in Barcelona's Old City.

The centuries-old, progressive church hasn’t hosted iftar meals before, but it feeds the poor regularly, even amid the pandemic.

Rector Peio Sánchez looked on during the prayer, dressed in his traditional black priest’s apparel.

“This pandemic has taught us a lot. Pain and difficulties open doors.”

“They say that challenges always create opportunities,” he said. “This pandemic has taught us a lot. Pain and difficulties open doors.”

In this case, the doors to the church’s expansive, open-air cloister — which he sees as a way to stand in solidarity with Muslims.

“This is a gesture that shows that interreligious dialogue is advancing as well as hospitality among the religions. For us, it’s the normal thing to do. When we show hospitality to others we learn from them.”

About 60 men usually show up for evening meals. They eat together at long tables, everyone carefully spaced out, facing a garden and surrounded by stone arches.

Wary of strangers, many of the diners don’t want to give their full names. Among them, Achmed, a 36-year-old homeless Moroccan.

“What am I doing here? he laughs. I’m eating! Eating after fasting all day long.”

On tonight’s free menu, lamb soup with chickpeas, boiled eggs, bread and fruit cooked and served by Catholic volunteers. Call it iftar with Jesus. It’s quite possibly a first, at least for many of the people here.

“Religions are here to unite us, not separate us. Before God, we are all brothers."

The idea came from Faouzia Chati Badou, head of the Association of Moroccan Women in Catalonia. She used to organize iftar dinners in Barcelona, but had to find a new venue due to the COVID-19 restrictions. Having the meals at the church demonstrates that “religions are here to unite us, not separate us. Before God, we are all brothers,” she said.

Related: Under lockdown in Morocco, Ramadan celebrations get a quiet reset

She said that the people who come here are often homeless and on their own.

“Celebrating iftar on the street would be so sad,” she said. “This is a sacred month. A time for family. Here we eat like family as if we were back in Morocco.”

Back in Morocco, if only for a moment. Then it’s back to the streets. And reality.

“There are no jobs so I can’t pay rent anywhere,” said a young Moroccan Berber hunched over his tray.

He also preferred not to give his name. He said he gets by collecting scrap metal all day. But with COVID-19, he said, people are throwing away less and less.

The young man finished up and thanked Rector Sánchez on his way out. He sleeps, he said, under wooden planks in an alley. With one eye open.

“There are lots of bad people out here,” he said. “They steal from you. They’ll take your bag, your coat, everything.”

Then, he was off with a wave and said he’d be back for “Catholic iftar” tomorrow after he hears the call to prayer.