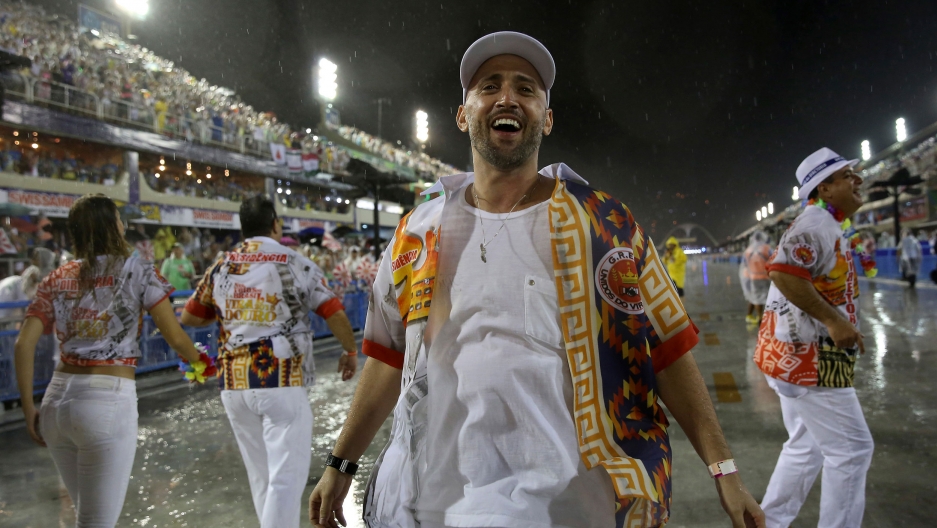 Comedian and actor Paulo Gustavo participates in the Carnival parade at the Sambadrome in Rio de Janeiro, Brazil, Feb. 15, 2015. The popular comedian died in a Rio hospital from complications related to COVID-19.

Paulo Gustavo, a popular comedian whose character Dona Herminia dealt with everyday family and LGBTQ issues in some of Brazil's biggest-box office movies and television shows, died of COVID-19, sparking an outpouring of grief across a country polarized by the pandemic. He was 42.

Gustavo died Tuesday evening in a Rio de Janeiro hospital after spending more than a month in intensive care. Fans had begun a vigil for him outside the hospital.

Conservative President Jair Bolsonaro, who tends to shrug off COVID-19 deaths and has downplayed the disease, tweeted his regret at the death of Gustavo, "who with his talent and charisma conquered the affection of all Brazil."

Brazil's Senate held a moment of silence in Gustavo's memory Wednesday before resuming a hearing into the president's handling of the pandemic, which has killed more than 400,000 Brazilians. Officials now say a more-contagious variant of the virus is spreading across the South American nation.

Gustavo's death at 42 highlighted how the disease is increasingly affecting younger Brazilians. The country is bitterly split between those urging stepped-up vaccination campaigns and lockdown measures and followers of Bolsonaro, who has denounced such restrictions.

"Look at reality. Stop denying the seriousness of this virus," Hellen Calixto, a Brazilian Twitter user, wrote in response to Gustavo's death. "I think that many, like me, did not treat the virus seriously because by the mercy of God it did not reach their family. But let's get serious, people."

The actor's character Dona Hermínia, inspired by his mother, was featured in movies and shows that sold 22 million tickets — making them among the most popular in Brazil's history. He played Dona Hermínia as a loud Rio suburban mother who humorously dealt with her gay son's sexuality in a way many considered helpful to positively presenting families with LGBTQ members.

Gustavo, who had more than 16 million followers on Instagram, represented a vision of a stable LGTBQ family that is still controversial in some conservative sectors of Brazilian society.

He is survived by his husband, Dr. Thales Bretas, and two 1-year-old children, Romeu and Galel, who were born in the United States to surrogate mothers.

Gustavo was hospitalized in mid-March after contracting COVID-19, was intubated a week later for breathing difficulties and eventually needed an artificial lung.

He recorded a video alluding to the disease at the end of last year, urging his fans to take care. He said that while Brazilians have covered their smiles with masks due to the pandemic, "we will not stop smiling or having hope."

Famed Brazilian singer Caetano Veloso shared a photo of himself hugging Gustavo on his social networks.

"The Brazilian people are in mourning," he wrote. "And they must react against those responsible for our vulnerability in the face of the pandemic that took this beloved person from us."