In response, thousands took to the streets in Paris and several other cities over the weekend to protest the decision.

The court’s reasoning: Traoré, 27 at the time, was in a “delirious state” during the attack, aggravated by his consumption of cannabis.

Abraham Nahoum was among the more than 20,000 people who gathered at the Place du Trocadéro near the Eiffel Tower in Paris to demand justice for Halimi.

“So, someone can just smoke a joint, and then go and kill someone? It’s an inappropriate decision,” said Nahoum, a 75-year-old Tunisian Jew who lived in the same neighborhood as Halimi.

“The entire Jewish community is traumatized.”

“The entire Jewish community is traumatized.” 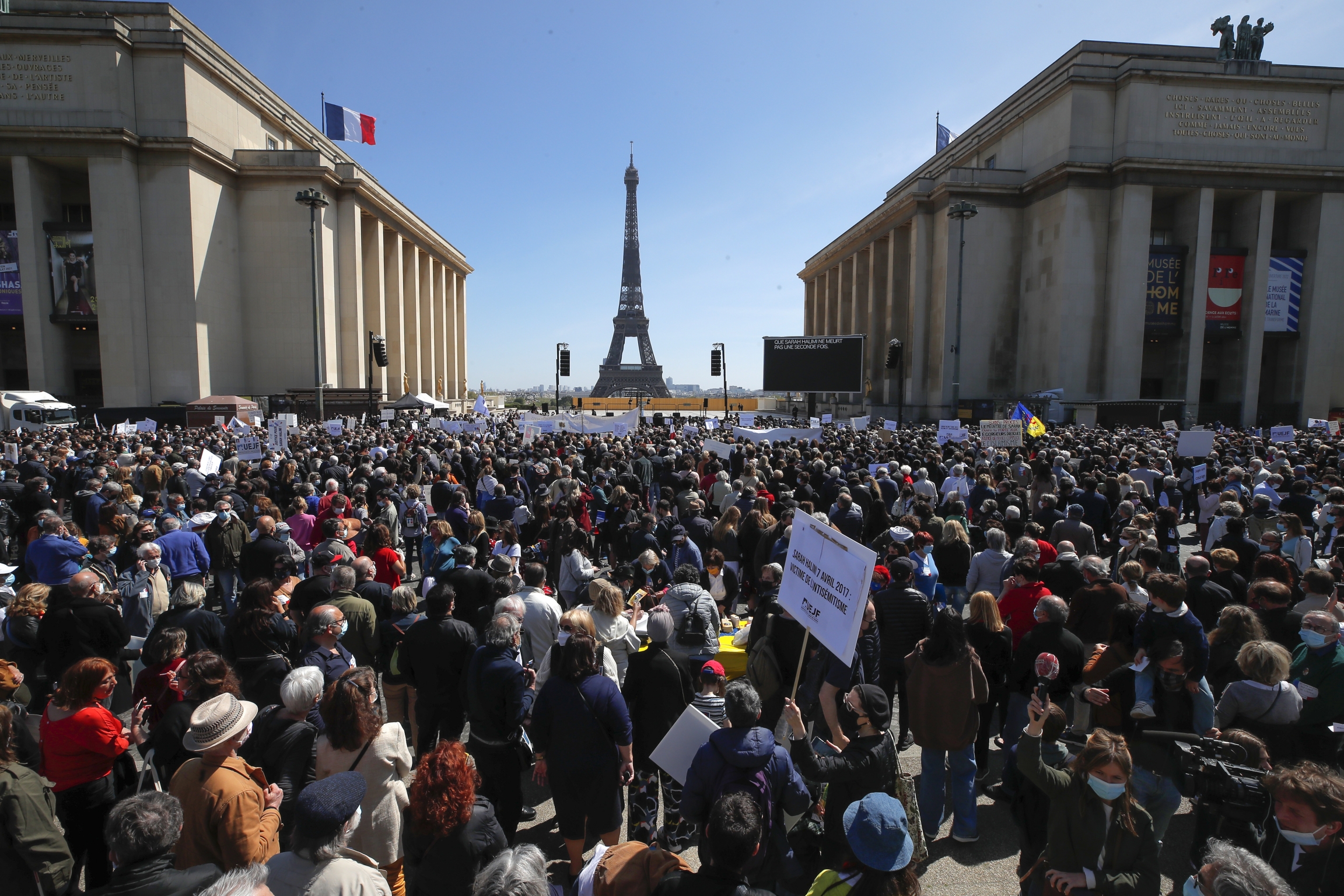 People stage a protest organized by Jewish associations, who say justice has not been done for the killing of French Jewish woman Sarah Halimi, at Trocadero Plaza near Eiffel Tower in Paris, Sunday, April 25, 2021.

Four years ago, Halimi was fast asleep when Traoré broke into her apartment in the middle of the night, tortured her for 20 minutes and then threw her off her third-floor balcony.

During the attack, neighbors said they heard Traoré scream Allahu akbar, the Arabic phrase for “God is great.” He also reportedly shouted, “I killed the devil.”

Traoré confessed to Halimi’s murder, but his lawyers argued that he couldn’t be tried because he was suffering from a psychotic episode after smoking a large amount of marijuana.

A court agreed, and earlier this month, the decision was upheld by the Court of Cassation, France’s highest appeals court. Traoré is currently in a psychiatric institution.

But the country’s Jewish community is still in shock.

“It really shows a lack of courage [on] the part of the highest legal organization in our country,” said Robert Ejnes, the executive director of CRIF, the umbrella organization for Jews in France.

Just before Sunday’s protests, France’s Justice Minister Éric Dupond-Moretti said he would present a bill next month to close a legal loophole that says a person cannot be held criminally responsible if they were “suffering a psychotic episode during the crime which eliminated all discernment or control” over the acts they committed.

If passed, the change would mean the accused could still be tried in cases where a psychotic episode was triggered by voluntary substance abuse.

In an interview with Le Figaro, French President Emmanuel Macron has also expressed support for the change.

“Deciding to take narcotics and then ‘going mad’ should not, in my view, remove your criminal responsibility."

“Deciding to take narcotics and then ‘going mad’ should not, in my view, remove your criminal responsibility,” Macron said.

Defending the court’s decision, Paul Bensussan, one of the psychiatrists who evaluated Traoré, told the French magazine Marianne that the perpetrator’s consumption of marijuana “was the cofactor not the cause” of his psychotic episode, and that Traoré had a history of mental instability. 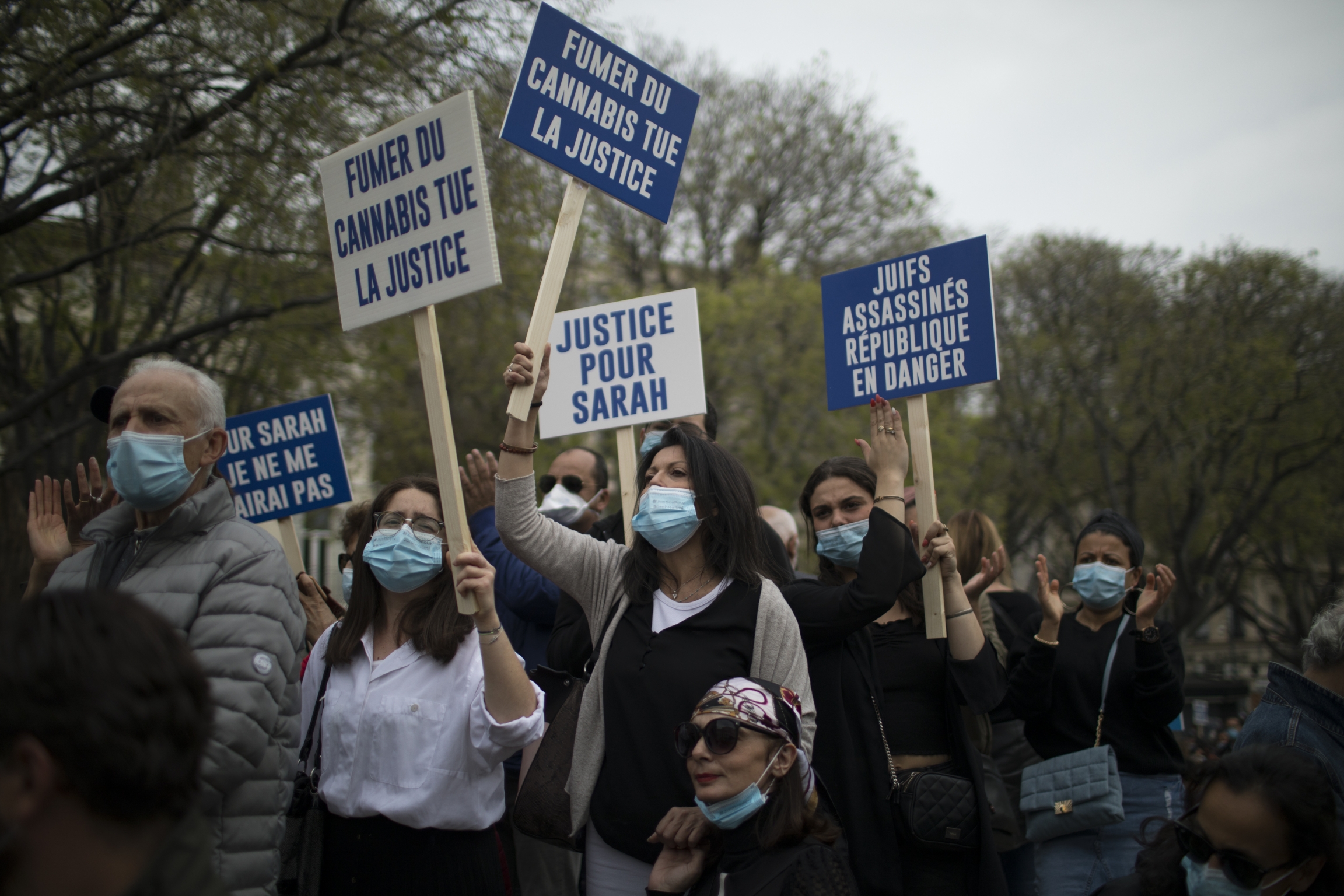 Halimi’s family is now calling for a trial in Israel.

“Israeli criminal law states that when the victim is Jewish and the crime is anti-Semitic, the Israeli justice system can take on such a case,” Francis Szpiner, one of the family’s lawyers told French paper Le Monde.

Critics, however, say they still want justice for Sarah Halimi in France, which they say can only happen if her murderer goes on trial.

“It’s France’s responsibility to seek a fair and proper judgment of this case."

“It’s France’s responsibility to seek a fair and proper judgment of this case,” said Michel Serfaty, a rabbi based in the Paris suburb of Ris-Orangis.

For Robert Ejnes of the CRIF, the need for a judgement in France goes beyond Halimi.

“It’s the judgement for anti-Semitism, Islamic anti-Semitism that has killed 12 times since 2003,” said Ejnes.

He pointed out that all recent anti-Semitic killings in France have come from perpetrators motivated by Islamic extremism — something else the state needs to address.

Related: In Germany, fighting against extremism starts at school

Though he is seeing signs of hope.

He said when Halimi was killed in 2017, only about 200 people — all from the Jewish community — showed up to a local vigil.

But Sunday’s protests were a different scene.

“Seeing the chief rabbi of France with all the leaders of the religious communities — Catholic, Protestant, Buddhist and Muslim — sent a very strong message to the nation."

“Seeing the chief rabbi of France with all the leaders of the religious communities — Catholic, Protestant, Buddhist and Muslim — sent a very strong message to the nation,” Ejnes said.

A message that says Halimi’s murder — and anti-Semitism in general — isn’t just a Jewish problem. It’s a French problem. And it’s time for the state to act on it.