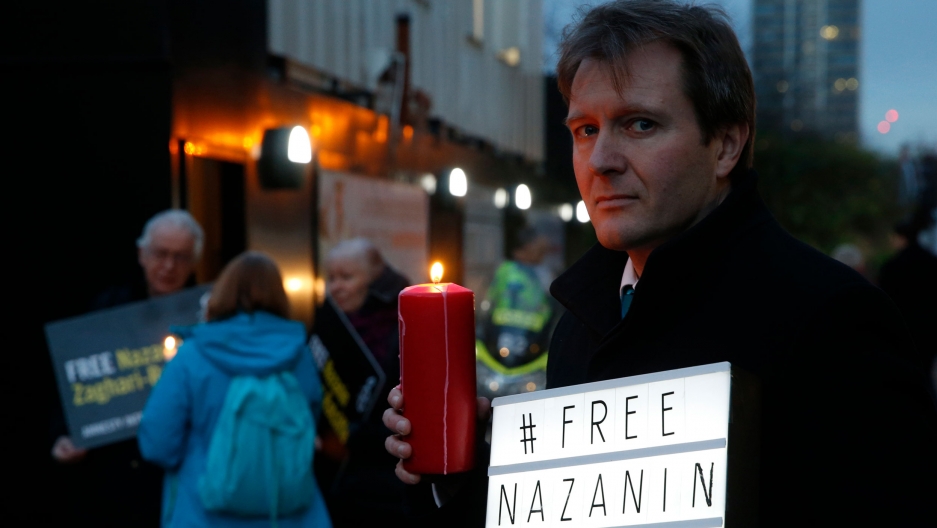 Nazanin Zaghari-Ratcliffe, an Iranian British woman long held in Tehran, was sentenced Monday to another year in prison, her lawyer said.

The sentencing drew immediate criticism from Britain in the high profile case that has prompted international condemnation of Iran.

Zaghari-Ratcliffe has already served a five-year prison sentence in the Islamic Republic. Her new sentence comes amid ongoing negotiations in Vienna over Iran's tattered nuclear deal with world powers and as Tehran seeks hundreds of millions of dollars from Britain from a decades-old arms deal.

Her lawyer, Hojjat Kermani, told The Associated Press that she received the second sentence on a charge of spreading "propaganda against the system" for participating in a protest in front of the Iranian Embassy in London in 2009.

State media in Iran did not immediately acknowledge the sentence, apparently issued after yet another closed-door hearing in her case. Her husband, Richard Ratcliffe, told the AP that her lawyer planned to file an appeal.

"I'm not sure I have much faith in the Iranian judicial system after five years of this, but if it keeps her out of prison until it is decided, then it is a good thing," he said.

"I don't think it is right at all that Nazanin should be sentenced to any more time in jail," he said. "I think it is wrong that she is there in the first place and we will be working very hard to secure her release from Iran, her ability to return to her family here in the UK, just as we work for all our dual national cases in Iran."

Johnson added: "The government will not stop, we will redouble our efforts, and we are working with our American friends on this issue as well." Johnson and his office declined to elaborate on that comment.

"We continue to call on Iran to release Nazanin immediately so she can return to her family in the UK," he said in a statement. "We continue to do all we can to support her."

The latest twist in Zaghari-Ratcliffe's case comes as Britain and Iran negotiate a long-running dispute over a debt of some 400 million pounds ($530 million) owed to Tehran by London. Before the 1979 Islamic Revolution, the late Iranian Shah Mohammad Reza Pahlavi paid the sum for Chieftain tanks that were never delivered.

While Iran has denied any connection to the tank payment, Zaghari-Ratcliffe's family and their supporters have linked the two.

"Nazanin continues to pay a terrible price, reduced to a bargaining chip between two governments," said Antonio Zappulla, CEO of the Thomson Reuters Foundation. "For how much longer must she be denied her liberty, her family and her future?"

Zaghari-Ratcliffe was sentenced to five years in prison after being convicted of plotting the overthrow of Iran's government, a charge that she, her supporters and rights groups deny. While employed at the Thomson Reuters Foundation, the charitable arm of the news agency, she was taken into custody at the Tehran airport in April 2016 as she was returning home to Britain after visiting family.

Rights groups accuse Iran of holding dual-nationals as bargaining chips for money or influence in negotiations with the West, something Tehran denies. Iran does not recognize dual nationalities, so detainees like Zaghari-Ratcliffe cannot receive consular assistance. A UN panel has criticized what it describes as "an emerging pattern involving the arbitrary deprivation of liberty of dual nationals" in Iran.

Authorities had released Zaghari-Ratcliffe from prison on furlough last March because of the surging coronavirus pandemic, and she had been detained in her parents' Tehran home since.