In France, an antique collector has buried two halves of a key that will unlock a golden casket worth nearly $1 million.

The casket could be yours if you can solve a series of nine riddles that will lead you to the keys. The game is called “The Golden Treasure of the Entente Cordiale,” but the story behind this treasure is just as fascinating as the hunt itself.

It begins in London in the summer of 1903, when King Edward VII, a huge Francophile, gifted French President Émile Loubet with a golden chest meant to symbolize a friendship between France and the UK.

“It's a very sort of Edwardian piece. ... It’s not by any means any sort of art-deco minimalism, it's very flamboyant.”

“It's a very sort of Edwardian piece,” said Paris-based historian Stephen Clarke, author of books including, “1,000 Years of Annoying the French.” “It’s not by any means any sort of art-deco minimalism, it's very flamboyant.” 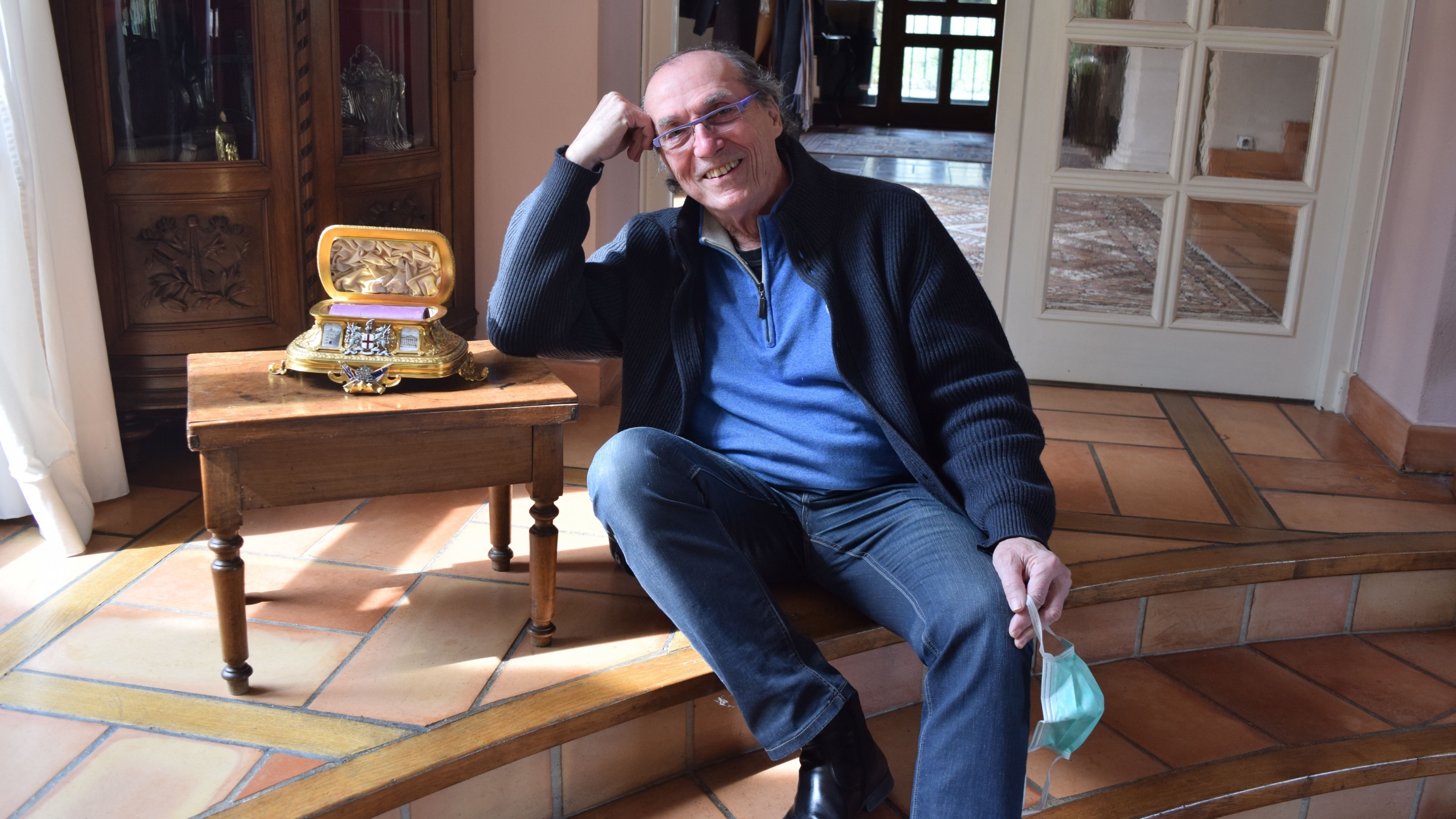 Michel Becker, an antique dealer, sits next to the golden casket featured in his treasure hunt, “The Golden Treasure of the Entente Cordiale."

On top of the casket, there are three figures, an allegory of peace crowning the symbols of France and the UK with laurels.

At the time, Britain and France were not the best of friends. But the two leaders were.

Less than a year after the exchange of this golden casket, Loubet and Edward VII went against their own governments to sign a series of peace agreements known as the Entente Cordiale.

The agreement, which was signed just before World War I, Clarke said, created more of a balance in Europe.

“Without it, it might have been Britain, Germany, Russia against France ... the first world war would have lasted about two weeks,” he said.

The Entente Cordiale is still regularly cited in the history books, but the golden casket associated with it was all but forgotten.

In 2017, the casket resurfaced at an auction where it caught the eyes of Michel Becker, an artist and rare antiques collector.

“The first thing that struck me about this object was that it had fallen into complete oblivion. ... It was shocking to me that so few people even knew of the object’s existence, when it carries such an important symbolism.”

“The first thing that struck me about this object was that it had fallen into complete oblivion,” Becker said. “It was shocking to me that so few people even knew of the object’s existence when it carries such an important symbolism.” 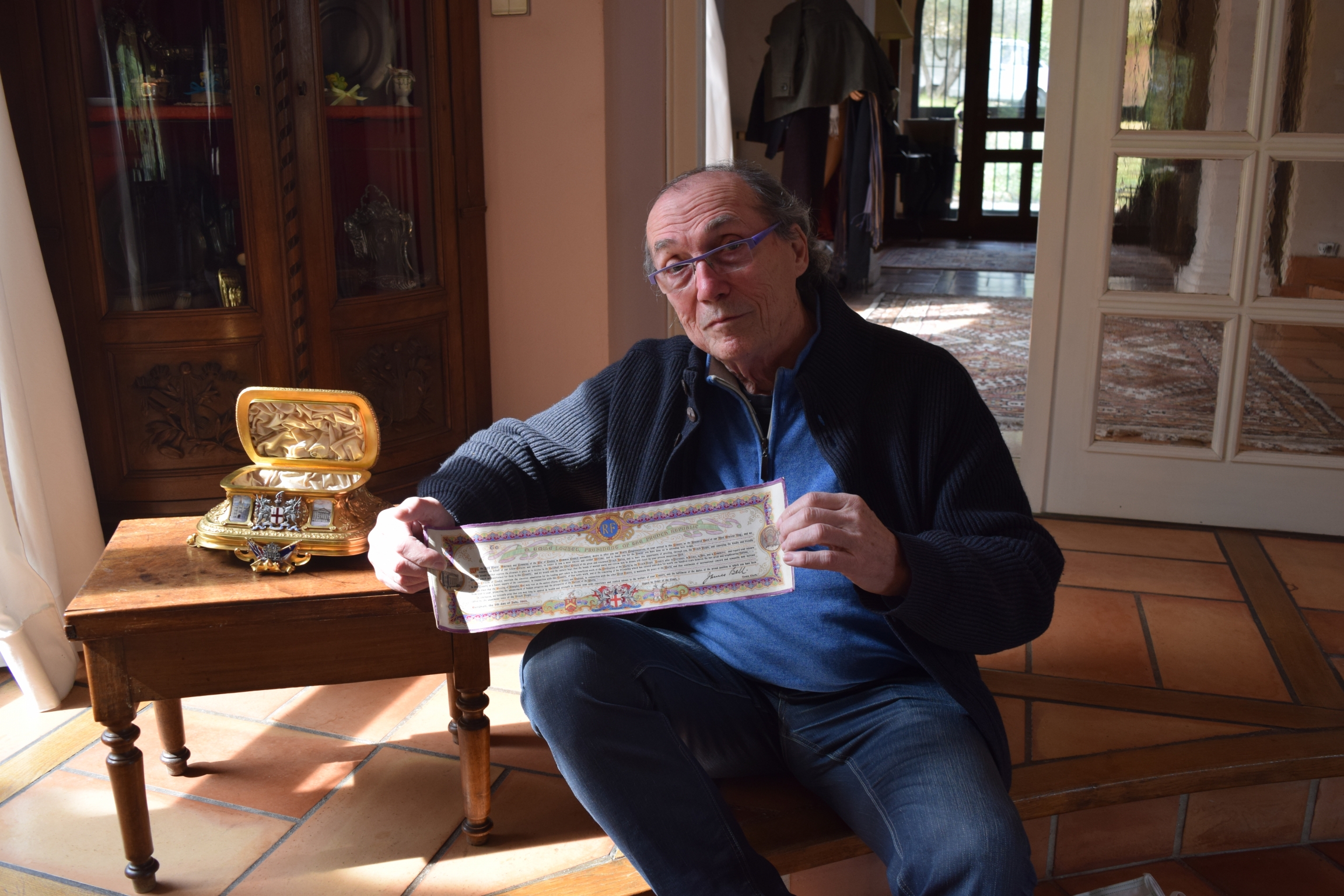 Michel Becker, art collector, sits with the golden chest featured in the "The Golden Treasure of the Entente Cordiale."

Becker is hoping his hunt for "The Golden Treasure of the Entente Cordiale" will change that.

The 70-year-old is no stranger to treasure hunts. In 1993, he created "The Hunt for The Golden Owl." Nearly 30 years later, the buried treasure still hasn’t been found.

The search for "The Golden Treasure of the Entente Cordiale" is more accessible, and the riddles themselves can be solved from the comfort of one’s own home.

“You can do it in a French armchair, an English armchair ... or even from an American rocking chair,” Becker said. “It’s a question of solving riddles, of finding things and of deep thinking.”

All you need is the book of riddles and two special maps, one of France, and one of the UK. 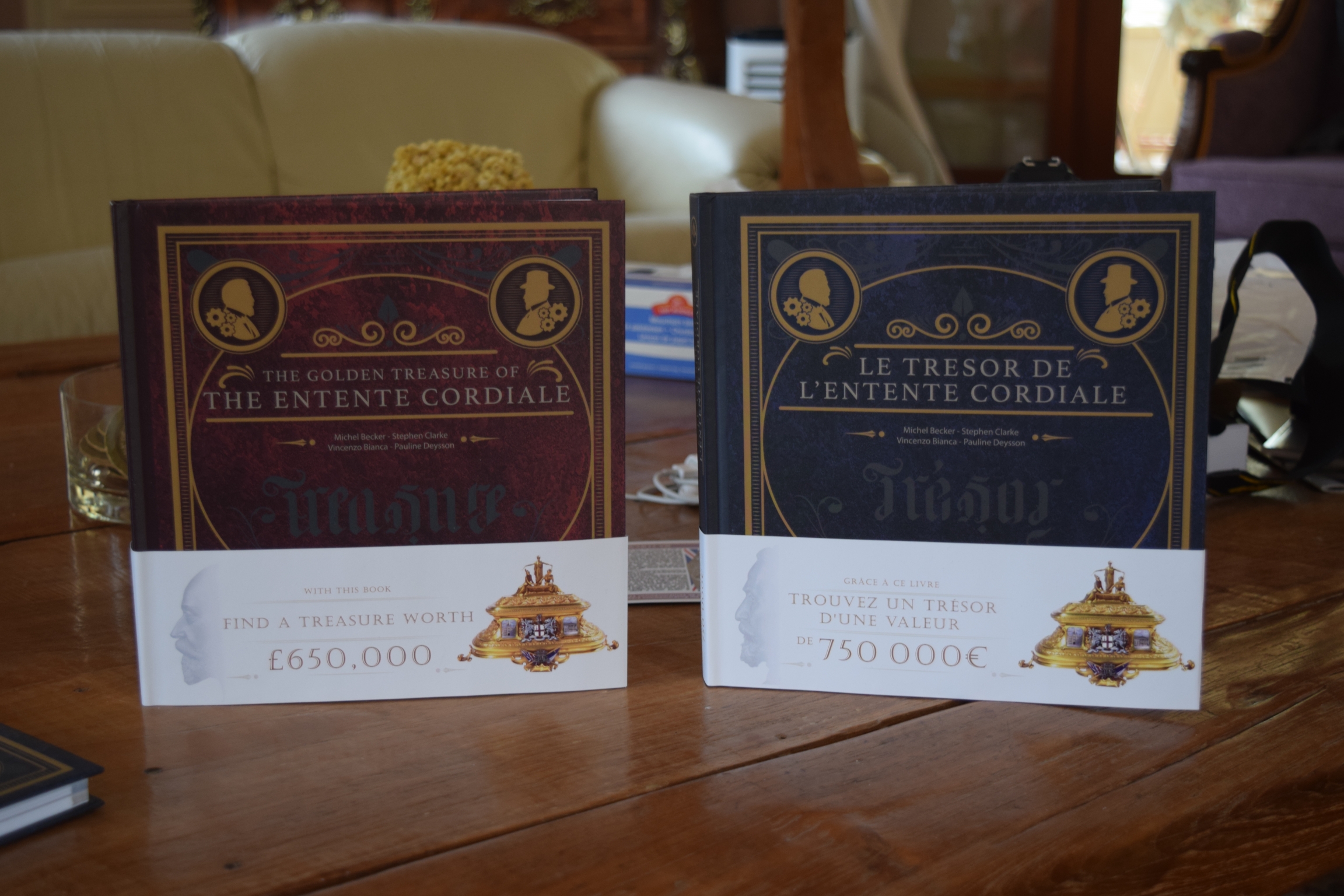 Two books about the "The Golden Treasure of the Entente Cordiale" needed to complete the treasure hunt.

In a few months, the golden casket will be locked up inside a museum in the western town of Rochefort.

Becker himself doesn’t know how to solve the mystery. He hired game master Vincenzo Bianca to design the treasure hunt.

Bianca’s advice: “Keep it simple.” Only once all the simple solutions are ruled out should players “then think for the complicated answer.”

Unlike the "Golden Owl," Bianca expects the hunt for the golden casket to take about one to five years to solve. Once the riddles are solved, players will still have to travel to dig up the keys — it will be easier once travel lockdowns have eased.

If two different people find one half of the key, they’ll split the prize.

It’s a scenario Becker’s actually hoping for — international cooperation honoring the symbolism of the Entente Cordiale.

Historian Clarke agrees. He says this kind of cooperation is needed now more than ever.

“Now [that] the Brits have started causing trouble now with Brexit, we're arguing about vaccines ... there's a lot of political tension,” Clarke said.

But, he adds, the Entente Cordiale shows that this tension is just short term. In the long term, there will always be an entente, an understanding, between France and the UK.

Becker hopes this treasure hunt can serve as a reminder of that.