Leonard Rentiera, a pint-sized rapper and social activist, is often escorted by two bodyguards in a bulletproof car around his city.

The 29-year-old artist from Buenaventura, a port city on Colombia’s Pacific coast, has been under threat for years due to his outspokenness about the violence that engulfs his hometown.

In the last four months, a wave of violence has taken over much of the city, as two criminal groups, Los Chotas and Los Espartanos, vie for control. These groups are splinter groups from the now-defunct La Local.

“People end up saying nothing and suffering in silence. I get scared, but I speak freely and with conviction, because someone has to."

“People end up saying nothing and suffering in silence. I get scared, but I speak freely and with conviction, because someone has to,” he told The World.

Buenaventura, in western Colombia, is widely known as one of the most violent cities in the entire country. Since the start of 2021, 22 people have been murdered and 10 disappeared.

For decades, the city has served as a crossing point for legal and illegal trade. In 2014, the military intervened, providing short-term stability, but the situation has deteriorated again. When seven young people were killed in clashes at the end of December last year, conflict intensified.

Through music, Rentiera expresses his anger about the violence and inequality in his city.

“I started rapping when I was 14, because there were so many things to say about what goes on here and the easiest way to say it was through music, through rap,” Rentiera told The World from a small recording studio in Buenaventura. 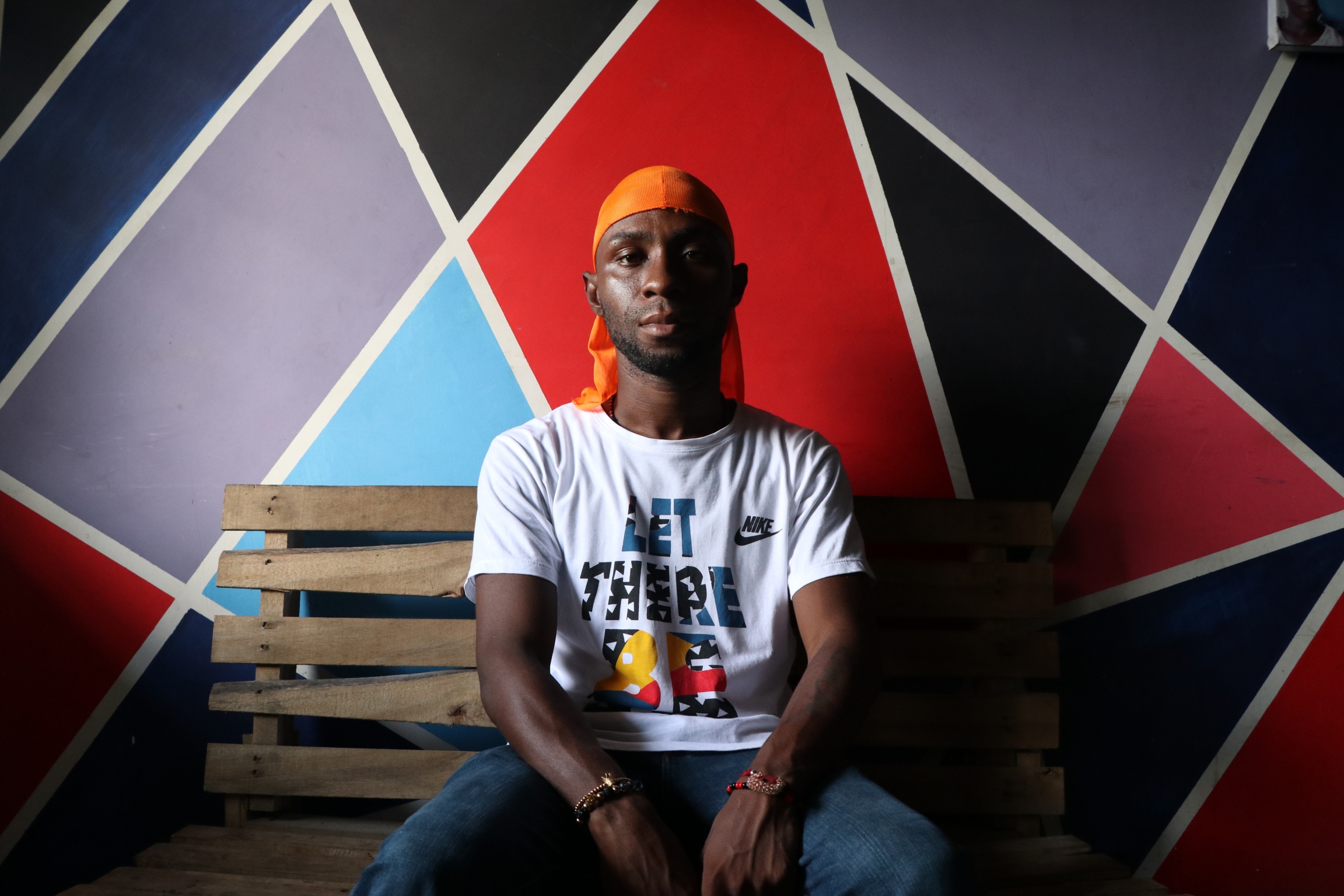 Leonard Renteria, 29, rapper and activist, posed at his recording studio in Buenaventura.

The World spoke to dozens of residents in the city, most of whom were scared to talk about the violence, over fear of reprisals from armed groups. Many said they can not leave their neighborhoods in the evening hours as gunfights are common between the rivaling groups.

Former priest Adriel Galván runs a victims’ memorial center filled with relics and photos of those who have lost their lives to violence in Buenaventura.

“The space is known as the chapel for memory, created as an exercise of symbolic reparation in the face of the violence in the city."

“The space is known as the chapel for memory, created as an exercise of symbolic reparation in the face of the violence in the city,” Galván said.

“Buenaventura has been one of the municipalities where around 80% or more is a direct victim of conflict.”

Galvan also has a security team due to death threats made against him for his efforts to curb the violence. 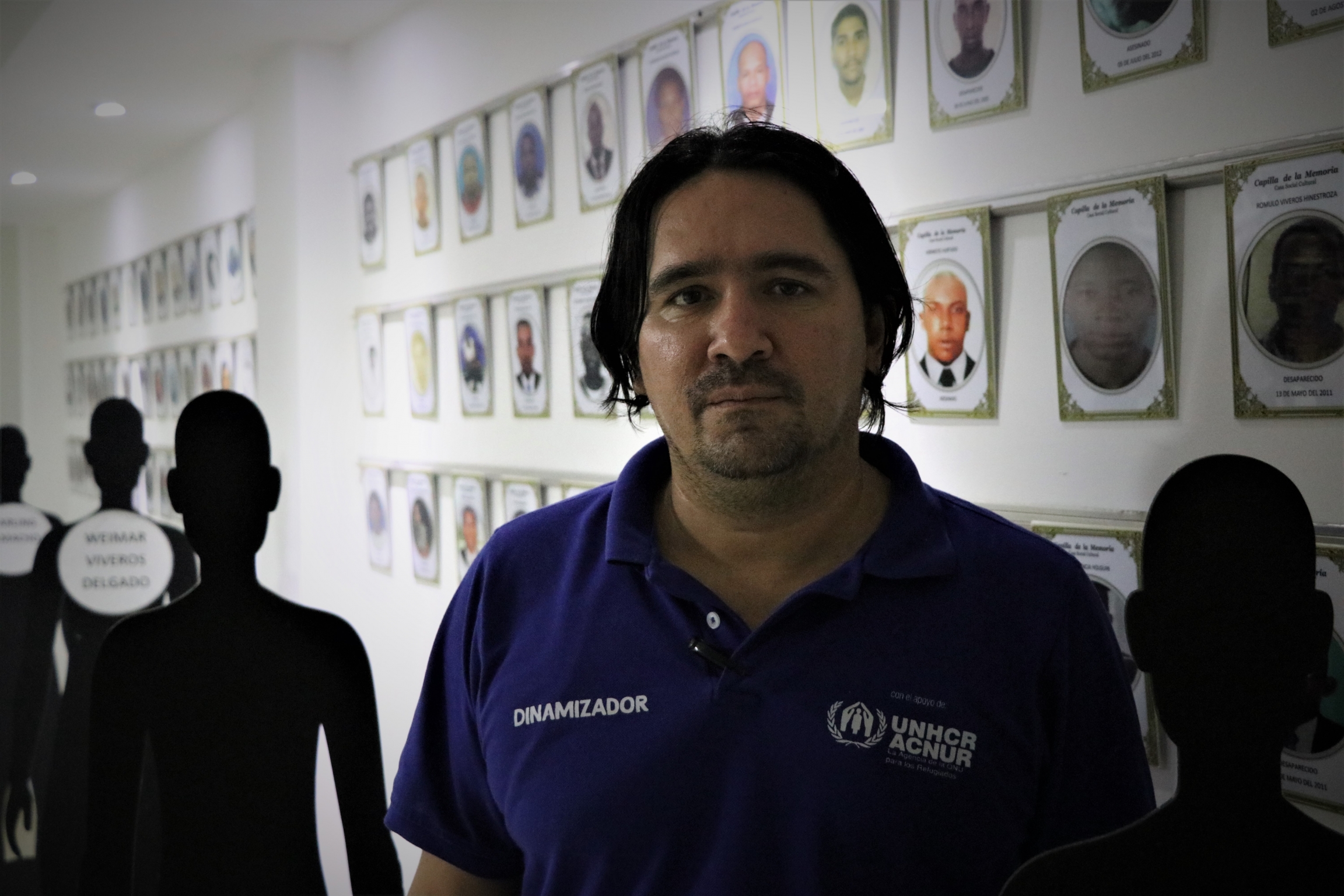 Former priest Adriel Galvan stands at a memorial center for victims of violence.

"Armed groups often recruit young, unemployed men, giving them weapons and economic incentives to help in the city’s huge drug trafficking economy," said Danelly Estupiñan, a local academic who has also received death threats and had to go into hiding for her work looking into corruption at the city’s port.

Locals have been calling on President Iván Duque to come to the city for months, to implement a special security plan to stop the ongoing violence, killings and disappearances in the region.

Last month, Duque sent Defense Minister Diego Molano to announce a plan to deploy more police. But locals say militarization is not the answer and more attention needs to be put on social issues —  like creating job opportunities.

“Unfortunately, I don't think that the government is going to heed the call to take action and do the right thing. Rather, I think the government is going to gloss over the situation and continue to blame the locals and stigmatize them and say that this is a situation of criminality,” said Gimena Sánchez-Garzoli, Andes director for the Washington Office on Latin America, a think tank.

Buenaventura’s port is the biggest and most important in the country. The majority of the nation’s imports and exports pass through it, yet unemployment is sky-high in the majority Afro-Colombian city, and 80% of the population lives in poverty. Many hold long-term resentment and feel abandoned by the government, like 45-year-old resident Ana Mosquera.

“The way they silence us is by killing us.”

“We’re really worried about the situation right now. It’s always been like this, but has now become much more visible because of the recruitment of young people into the armed groups," she said. “The way they silence us is by killing us.”

Mosquera said the only time the government comes is at election time, when they make promises they never fulfill, just to gain votes.

“They come, they do their campaign and they leave,” she said from the patio of a local theater group, where she and others participate in the reenactment stories of violence and displacement in the city. 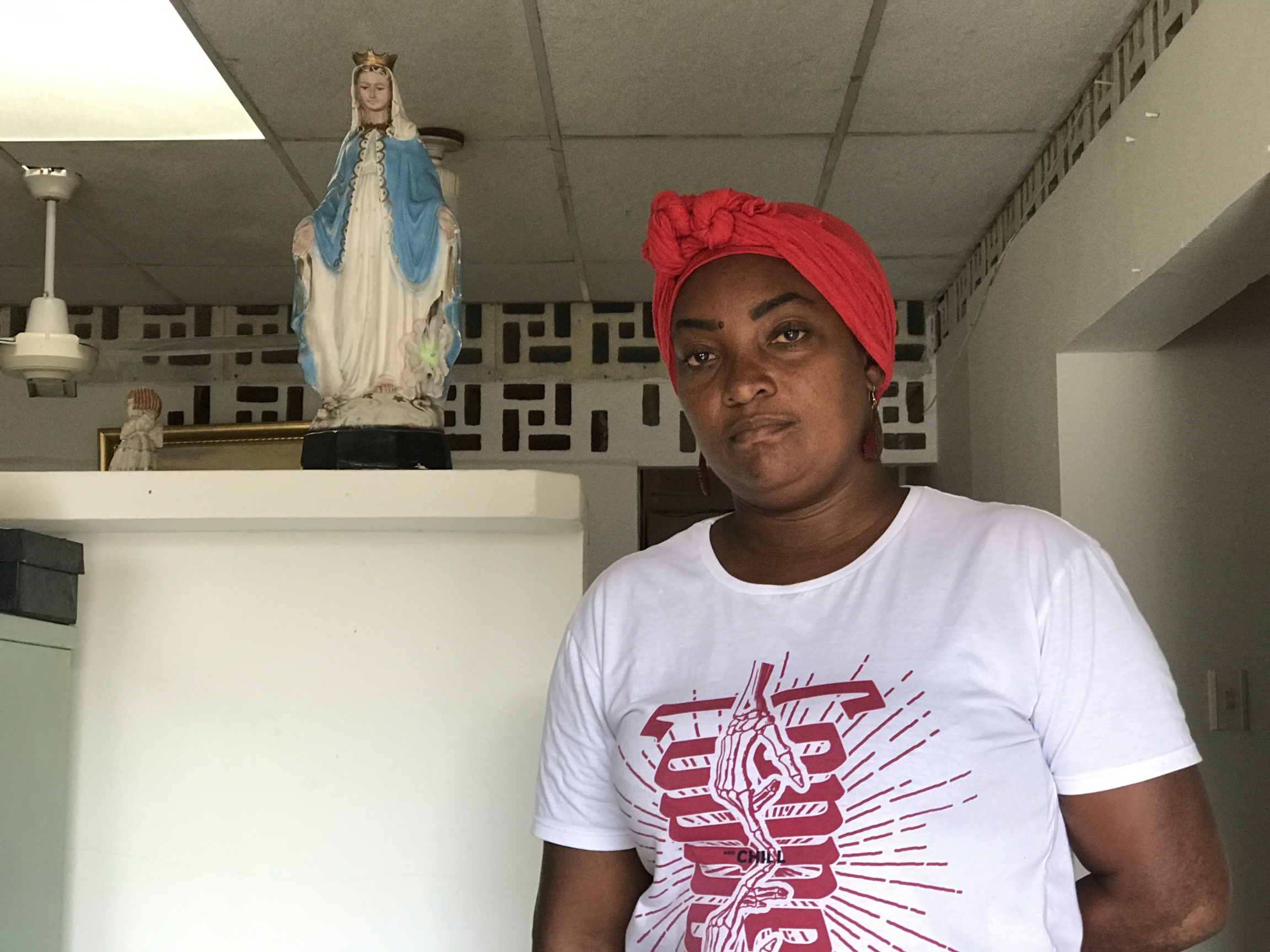 Ana Mosquera, 45, poses for a photo at a local theater group.

For some victims of violence, a neighborhood known as the Puente Nayero humanitarian space provides relative safety, with 24/7 military protection.

The neighborhood, cut off from other parts of Buenaventura, emerged out of a grassroots effort by residents who fought back against the armed groups that used to violently control it. It was the site of gruesome chop houses where armed groups would dismember and dispose of their victims in the nearby sea.

Today, in the scorching heat, children play among the litter and rubble on unpaved paths lined with wooden houses on stilts above water. The air is filled with a potent stench from raw sewage that runs underneath. But it is a relatively safe space compared to other parts of the city.

Resident Nayibe Angulo’s husband disappeared three years ago, and she and her sons had to flee their rural home on the outskirts of Buenaventura. 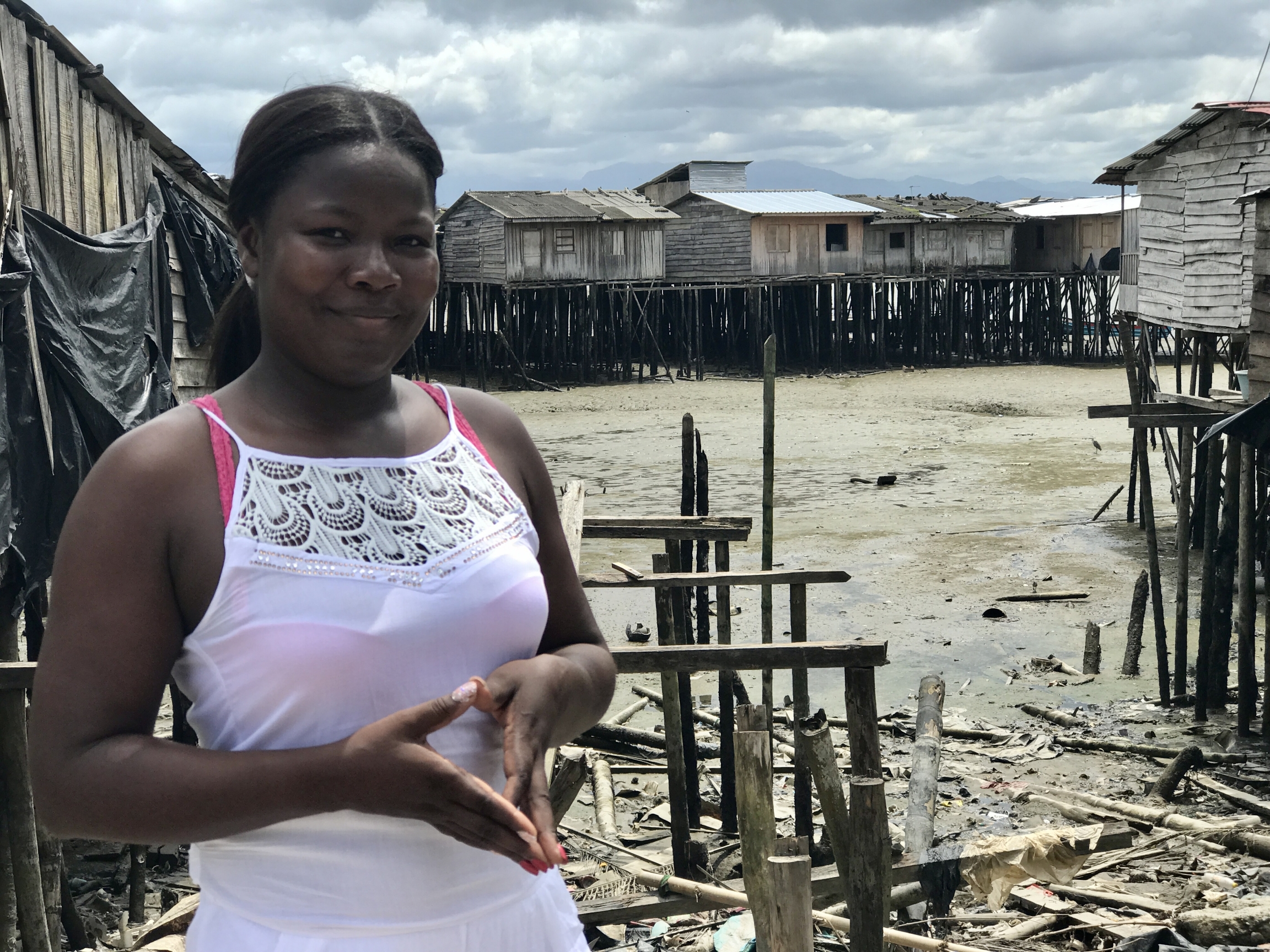 Nayiba Valencia Angulo stands near her house in Buenaventura.

“It’s a profound fear,” Angulo said, who now advocates for victims of displacement, putting her life at risk to do so. She told The World that she and some other activists in the city have recently received threatening leaflets by armed groups.

Brayan Ocoro, 20, also a resident of the humanitarian space, talked to The World from the porch of a wooden shack. He said he was learning English and is focused on his dreams of becoming a business manager, but that opportunities are scant in Buenaventura for people like him.

“Young boys are fighting to get a better future, a better life.”

“The government doesn’t help people here, so that’s why things are as they are right now,” he said. “Young boys are fighting to get a better future, a better life.” 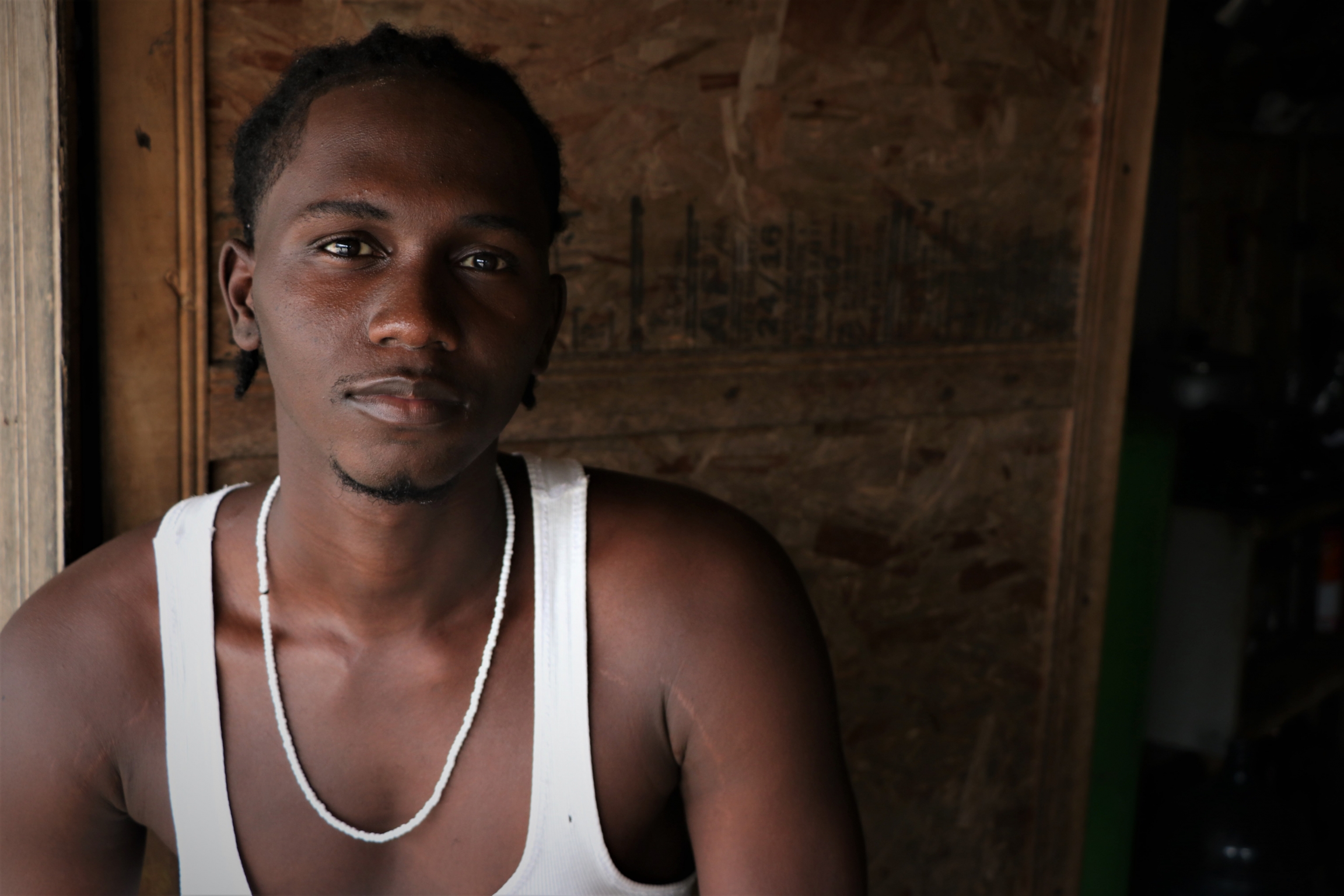 Brayan Ocoro is a resident of the humanitarian space.

As violence rages on and residents wait for their government to take appropriate action, Rentiera, the rapper, sends this message to President Duque on behalf of the “forgotten” Afro-Colombian and Indigenous communities in his region.

“Buenaventura is Colombia, too. We, too, have been part of building this country..." 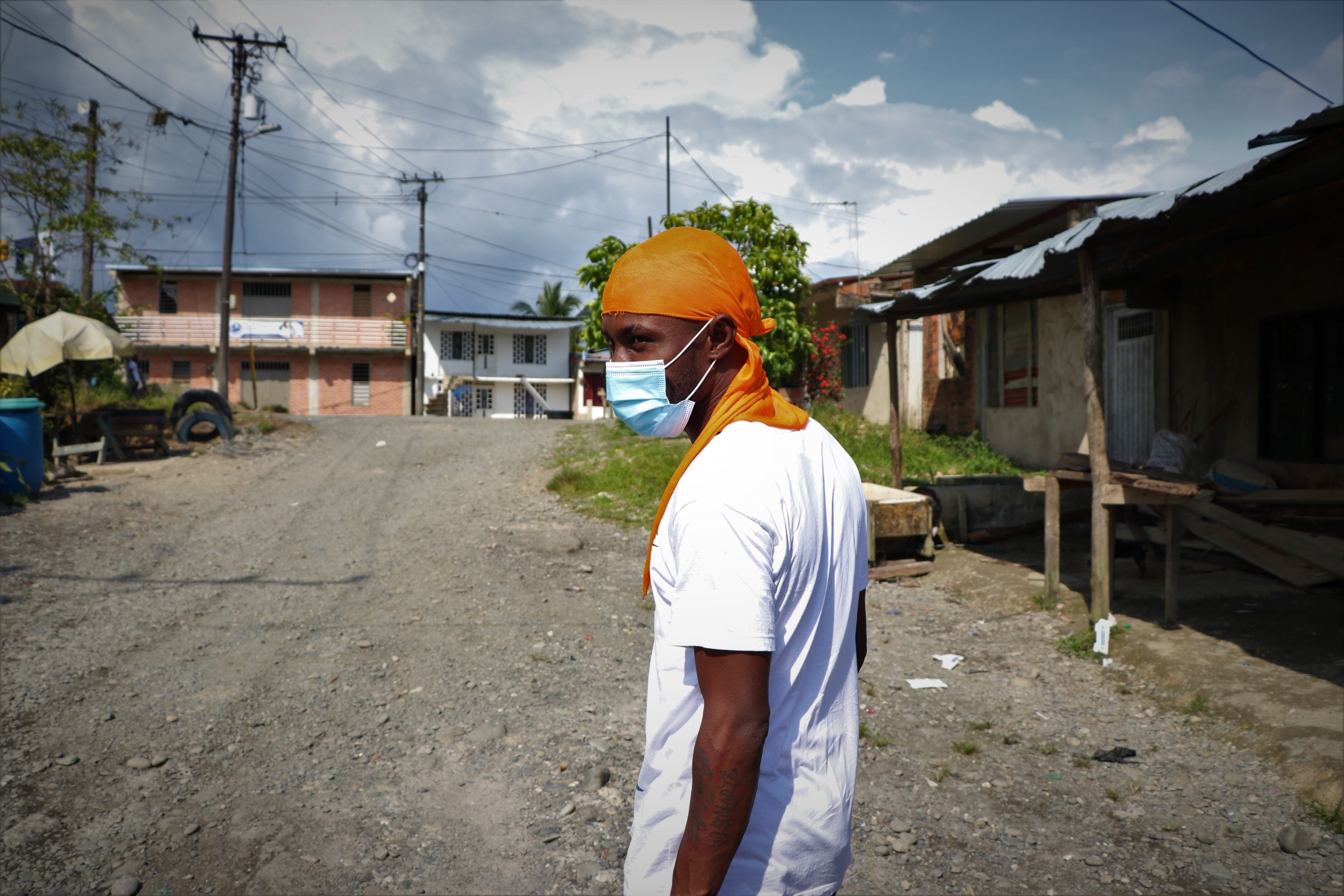 Leonard Renteria, 29, rapper and activist, walks around the neighborhood.

“Buenaventura is Colombia, too. We, too, have been part of building this country, and we’ve fought hard so that this port produces for the country.”