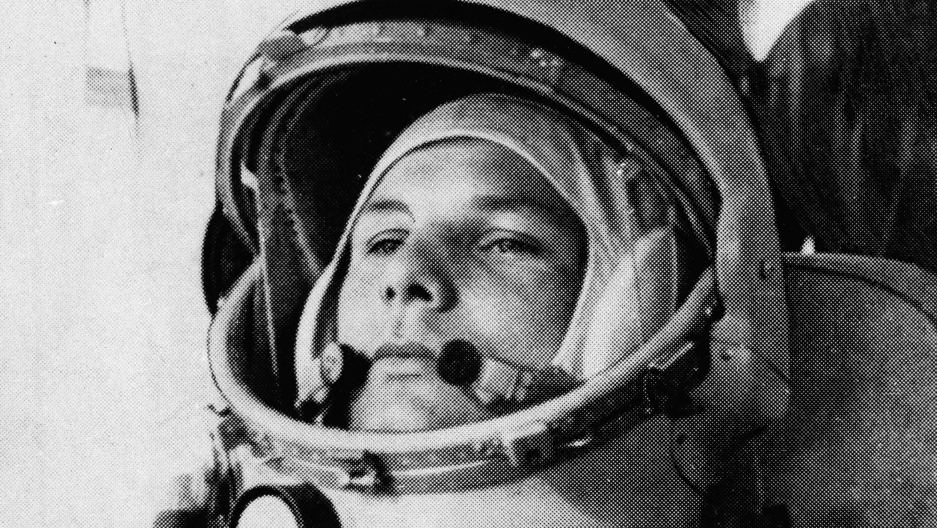 On this day in 1961, Gagarin's space capsule completed one orbit around Earth and returned home, marking a major milestone in the space race. As he took off, you could hear Gagarin's muffled yet iconic "Poehali," which means "Let's go" in Russian.

Gagarin's pioneering, single-orbit flight made him a hero in the Soviet Union and an international celebrity. After putting the world's first satellite into orbit with the successful launch of Sputnik in October 1957, the Soviet space program rushed to secure its dominance over the United States by putting a man into space. Gagarin’s steely self-control was a key factor behind the success of his pioneering, 108-minute flight.

The World's Marco Werman spoke to Stephen Walker, who has just published a book about Yuri Gagarin called "Beyond: The Astonishing Story of the First Human to Leave Our Planet and Journey into Space." 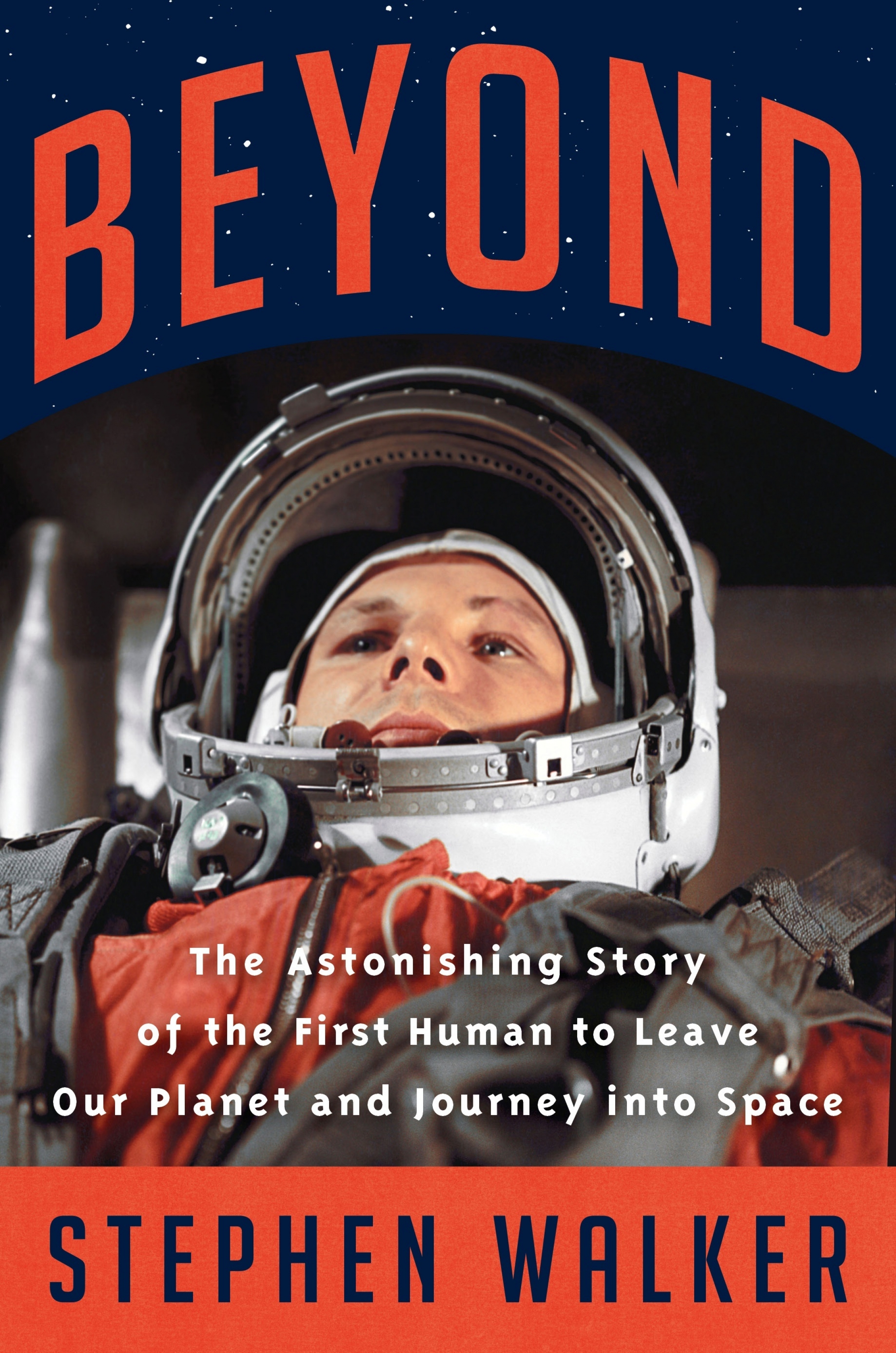 Cover of Stephen Walker's biography on Yuri Gagarin, "Beyond: The Astonishing Story of the First Human to Leave Our Planet and Journey into Space."

Marco Werman: Stephen, tell us a little more about Yuri Gagarin. Before he became known as the first man in space, who was he?

Stephen Walker: Well, it's a really interesting question. He was actually brought up in a little village just to the west of Moscow. And in 1941, Nazis invade Russia, and they swallow Gagarin's village. And something very seminal happens to Gagarin, which I think determines, in some respects, the course of his life. At the age of 7, he is horrified to see that his little brother, Boris, age 5, is being hanged from an apple tree by an SS officer, and he tries to cut his brother down from this branch. But he's very small. He can't do it. So, he races back, yells at his mother, Anna, who comes racing out, rushes across and cuts down little Boris from this tree just in time. And that experience seared Gagarin for life. It gave him kind of an inner toughness and inner resilience, which is why he was able to sit effectively on top of the world's biggest nuclear missile, waiting to be blasted into space.

Right. And as we know, the Americans were stunned when the space capsule orbited the Earth. So, I casually told the story of this day in 1961, earlier, basically the rocket launch; Gagarin went up, did an orbit and then came back down alive. But that doesn't quite capture the intense drama of the day, does it?

Not at all. This rocket — it's called an R-7 — is unbelievably dangerous. The chances of Yuri Gagarin getting back alive were less than 50-50. Almost everything you can think of goes wrong. No one knows what happens to a human being in space. And then, of course, the rocket itself is so dangerous because many of them have blown up. The Russians were desperate to get ahead of America, which means they took risks. So, it's an incredibly dramatic tale of this 106 minutes that sort of changed the world.

What was the mission of the Soviet rocket and what did Gagarin himself think at the time about it?

Well, the mission was basically to see if a human being could survive in space and fly in orbit around the Earth. And there is this secret briefing given by Yuri Gagarin the day after his flight, and he tells the story of what happened 11 minutes after launch. Gagarin separated from the rest of his rocket, and he started very gently to spin. And then, he turned to the little porthole on his right and he saw the Earth. He had escaped the biosphere.

Incredible perspective. How was Gagarin received once he touched down some 90 minutes later?

Well, he actually landed hundreds of kilometers, of course. So, he ejects from this capsule at about 20,000 feet and the capsule lands separately. And Gagarin by parachute lands in a potato field. And there's no one there except an old lady and her granddaughter who were picking potatoes. So, he goes up to them and they run away. They're absolutely terrified. They see this, kind of, orange spacesuit. He manages to convince them he's a comrade, he's Soviet, he's safe, and he says, "I need to get to a phone. Have you got any way of my getting to a phone?" So, they offer him the use of a horse. This guy's been around the world at 18,000 miles an hour. And they're talking about putting him on a horse to get to a telephone. It's just crazy. Just before the horse arrives, some tractor drivers turn up, very curious. They've heard about him on the radio, on the kind of state radio, because it's now being broadcast. And then within minutes, this jeep arrives with soldiers and they all start taking photographs. And there is a photograph of him, which is in my book, and it's just wonderful. He's just been around the whole planet and he's landed in this potato field. And there's this photograph. It's quite extraordinary.

I mean, it speaks of the high ambition and also the low reality of the Soviet Union during the Cold War. The USSR, as you said, Stephen, was determined to beat the US in getting a human into space. What was the reaction in the West when Yuri Gagarin went up and came home, and specifically in the United States?

Absolute shock. I mean, there is a press conference which President Kennedy, remember new in the job, gave that afternoon, and he looks completely and utterly shell shocked. He says he extends his congratulations to Khrushchev, who was the premier of the USSR at the time and also to the man who was involved. He can't even say his name, but it is a real bad moment for him and for the American space program. You're looking at somebody who is on the back foot. And we know this because two days later, Gagarin was celebrated in a, basically, parade that was millions of people, the biggest party really in Moscow's history.

And at the very time that Gagarin was being celebrated and having the hero of the Soviet Union gold star medal pinned to his chest, we know that Kennedy was in the Cabinet Room at the White House with his advisers, and Kennedy is tapping his teeth with his pencil, which is always a sign of nervousness with him. And he says, "What can we do? What can we do to catch up? How do we leapfrog them?" And he comes up with a wonderful line. He says, "Even if the janitor in the White House has an answer, I want to hear that answer." And this is when the moon idea really starts to take hold. And what I hope I have managed to do is to put readers right in the center, in the epicenter, of events, the little fly on the wall, that gives us an often very jaundiced view, but really fascinating inside story of what was really happening and how different that was from the presentation to the world of what was happening.