On Saturday night, downtown Cairo looked like a scene straight out of the movies.

Think dramatic lighting effects, performers in ancient Egyptian costumes and replica horse-drawn chariots and the stars of the show: 22 royal mummies of the New Kingdom from the 17th through the 20th dynasties, according to the country’s Ministry of Antiquities.

As part of the multimillion-dollar event, the “Pharaohs’ Golden Parade,” the 18 kings and four queens were transported from the Egypt Museum in Tahrir Square along the River Nile to their new home at the National Museum of Egyptian Civilization, south of the capital.

The mummies, traveling in special vehicles resembling boats and ordered chronologically by each pharaoh’s reign, were placed in nitrogen-filled boxes fitted with shock absorbers. It was a 40-minute journey, and the road was freshly paved to minimize any bumps.

Once at the National Museum of Egyptian Civilization, Egypt’s President Abdul Fattah al-Sisi oversaw a ceremony that included a live orchestra, singers and dancers. Prerecorded videos played on a giant screen.

The mummies were originally buried around 3,000 years ago in secret tombs in the Valley of Kings and the nearby Deir el-Bahri site. Both areas are near the southern city of Luxor. The tombs were first excavated in the 19th century.

Later, the mummies were taken to Cairo by boats that sailed the Nile. Some were showcased in glass cases, while others were stored. The remains of Ramses II were taken to Paris in 1976 for intensive restoration work by French scientists. 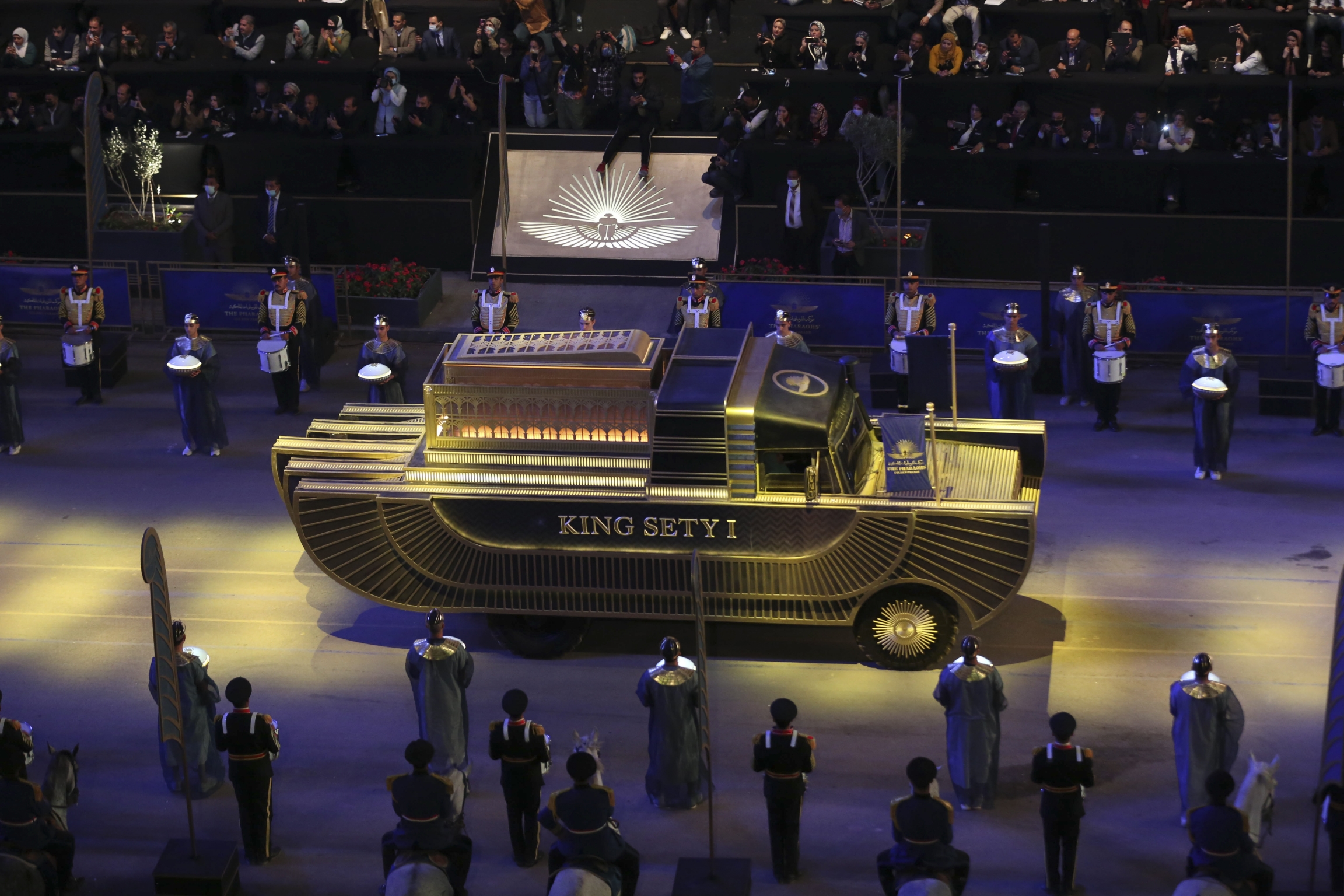 A convoy of vehicles transporting royal mummies is seen in Cairo, April 3, 2021. Egypt held a parade celebrating the transport of 22 of its prized royal mummies from the Egyptian Museum to the newly opened National Museum of Egyptian Civilization.

Radwa Rashad watched the ceremony that was livestreamed from her home in Cairo. She runs a digital marketing business there and calls herself a “big heritage and antiquities buff.”

Rashad said the event’s theatrics were amazing but she feels the historic details about who these kings and queens were got lost in all of the fanfare.

Related: 10 years after the Arab uprisings, Egypt at ‘lowest point’ for human rights

Rashad grew up learning about the mummies and saw them on school field trips. But this event, she says, could have been more educational.

“It was more the Academy Awards than transferring 22 kings and queens from the pharaonic era.”

“It was more the Academy Awards than transferring 22 kings and queens from the pharaonic era.” 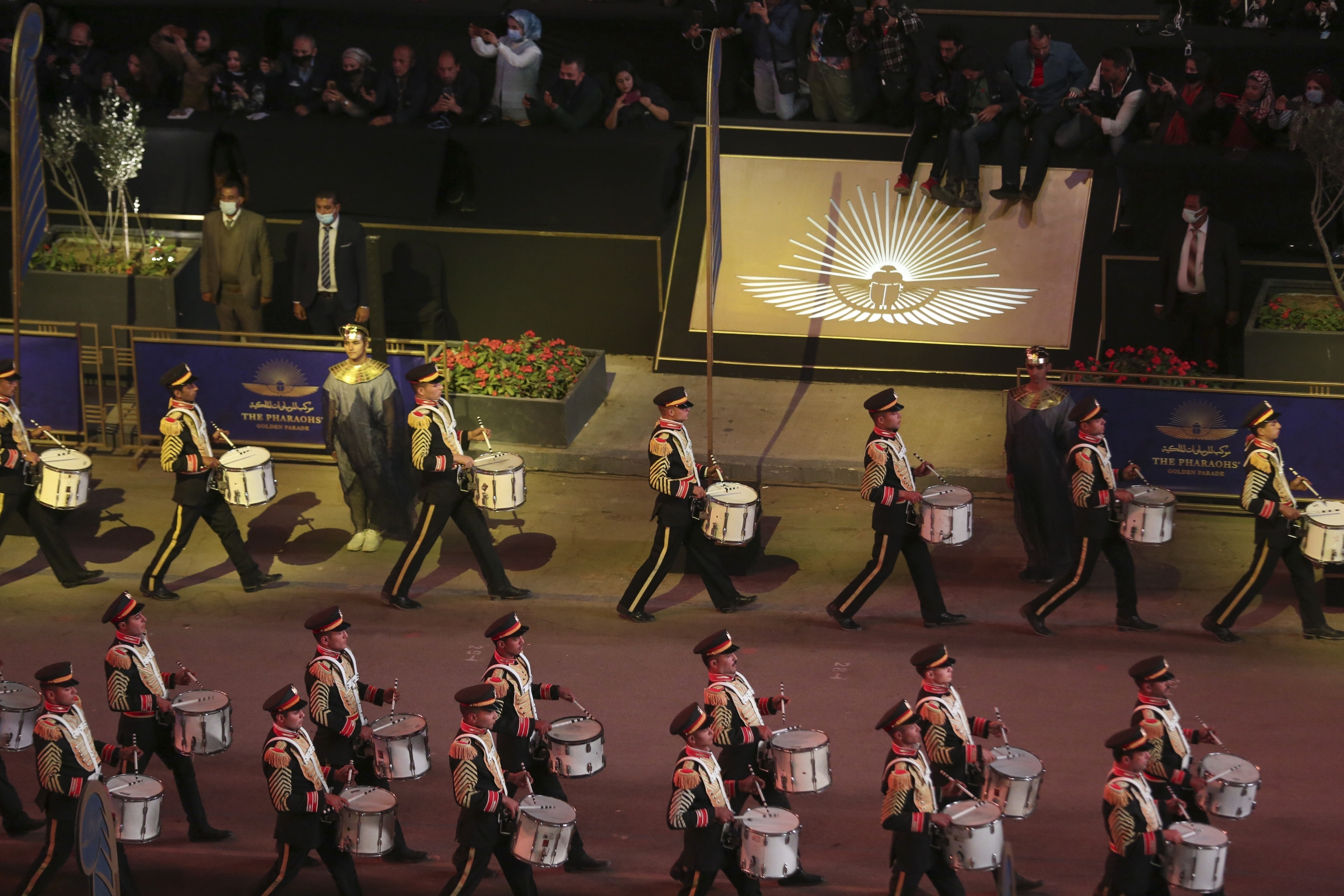 Among them: Queen Hatshepsut, Egypt’s only woman pharaoh — who wore a false beard to overcome tradition requiring women to play only secondary roles in the royal hierarchy.

Monica Hanna is the acting dean at the Arab Academy for Science, Technology and Maritime Transport in Cairo.

“They all have wonderful stories … each and every one of them,” she said.

King Ramses II is the only Egyptian pharaoh to have been issued a passport. That’s because he had to go to Paris in the 1970s for UV treatment, according to Salima Ikram, an Egyptologist at the American University in Cairo. 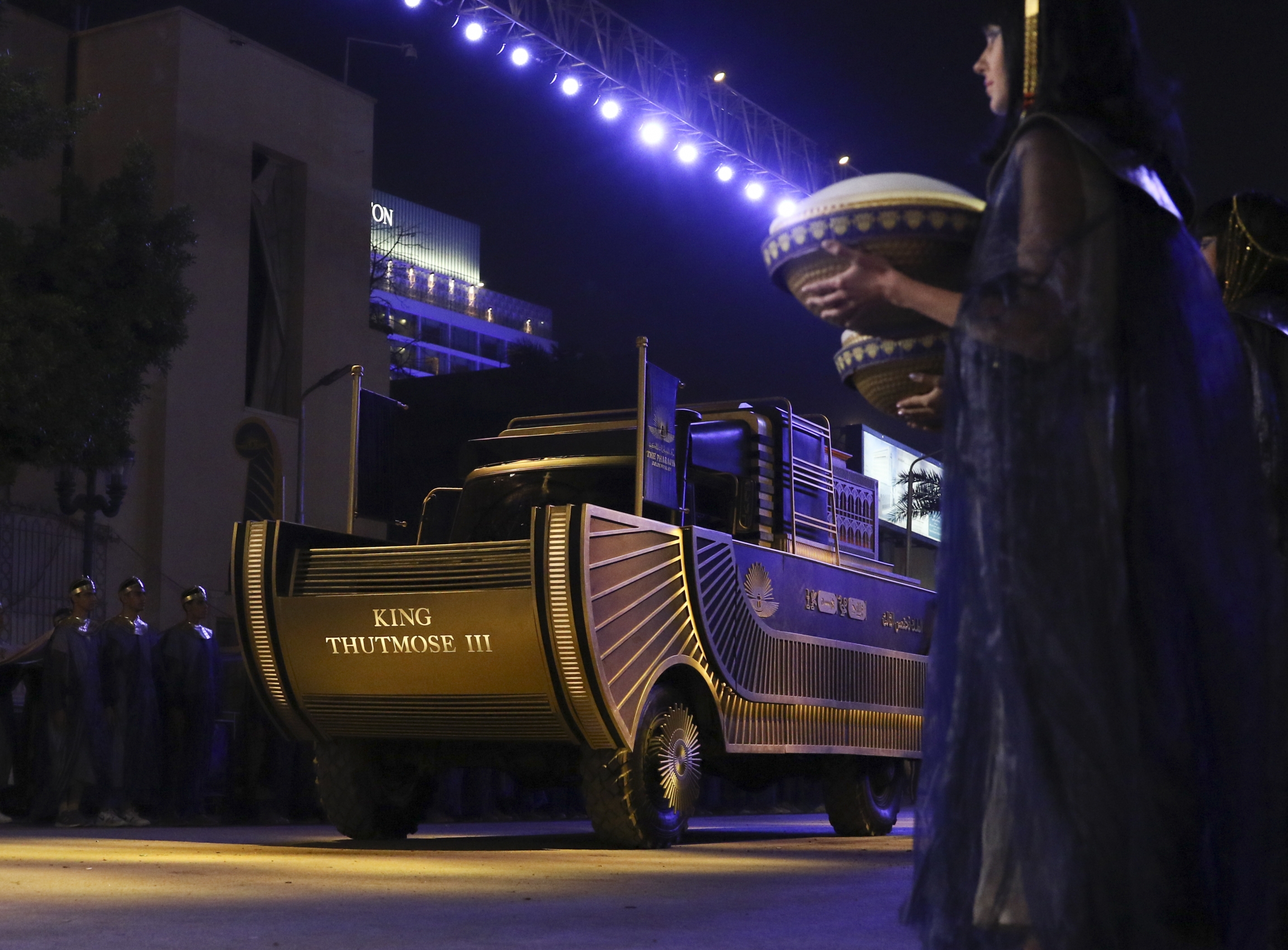 A convoy of vehicles transporting royal mummies is seen in Cairo, April 3, 2021. Egypt held a parade celebrating the transport of 22 of its prized royal mummies from the Egyptian Museum to the newly opened National Museum of Egyptian Civilization.

She explained: He was growing a fungus and “was flown in a special air force jet with his passport, and under profession, it said ‘pharaoh.’ So, that’s quite sweet.”

The mummies have moved around a lot through time — for restoration and display — but this last journey was to ensure their long-term preservation.

“The new display place is actually better, a bit better than the one they were in, it’s more climate-controlled, there’s more space.”

“The new display place is actually better, a bit better than the one they were in, it’s more climate-controlled, there’s more space,” she said.

The mummies will be on exhibit later this month at the museum. The made-for-TV parade was part of Egypt's efforts to attract foreign tourists by publicizing its ancient artifacts. The tourism industry has been reeling from political turmoil following the 2011 popular uprising that toppled longtime autocrat Hosni Mubarak, and more recently, the coronavirus pandemic.

But the show’s critics say it cost too much at a time when Egypt is struggling. They also point to the spectacle as a diversion from President Sisi’s abysmal human rights record.