Cities worldwide have transformed their streets into pedestrian-friendly spaces to encourage cycling and walking during the COVID-19 pandemic. The goal is to make public transport less crowded and reduce the spread of the virus.

London, Paris and Mexico City have all welcomed record numbers of cyclists onto their streets, but Madrid lags far behind the trend. The Spanish capital’s bike-sharing program hit new records during the pandemic, but this was vastly outpaced by the increased use of private vehicles.

Madrid activists are trying to change that with an anti-car movement.

Two groups have formed — Revuelta Escolar (School Revolt) and Revuelta Vecinal (Neighborhood Revolt) — to take back the streets from cars in the form of road-closure protests.

Related: Kids in Spain venture outside for first time in weeks

Revuelta Escolar grew out of the Fridays for Future climate movement and already had significant success in Barcelona before arriving in the capital.

On a recent Friday afternoon in March, families and their kids gathered in front of the Colegio Palacio Valdés. The elementary school sits a few feet from 10 lanes of city traffic on one of Madrid’s busiest boulevards.

“Right now there is a lot of traffic and it is the exact hour the kids get out of school. ... Our aim is to give voice to our children for their future."

“Right now, there is a lot of traffic and it is the exact hour the kids get out of school,” said Yetta Aguado, who organized nine simultaneous school protests across the city.

The authorities gave Aguado part of a narrow street for the Colegio Palacio Valdés protest, and traffic still roared nearby. At one point, roadworks began next to where the children were playing.

“Our aim is to give voice to our children for their future,” she said, as 5-year-olds chanted, “More Unicorns! Less Cars!” 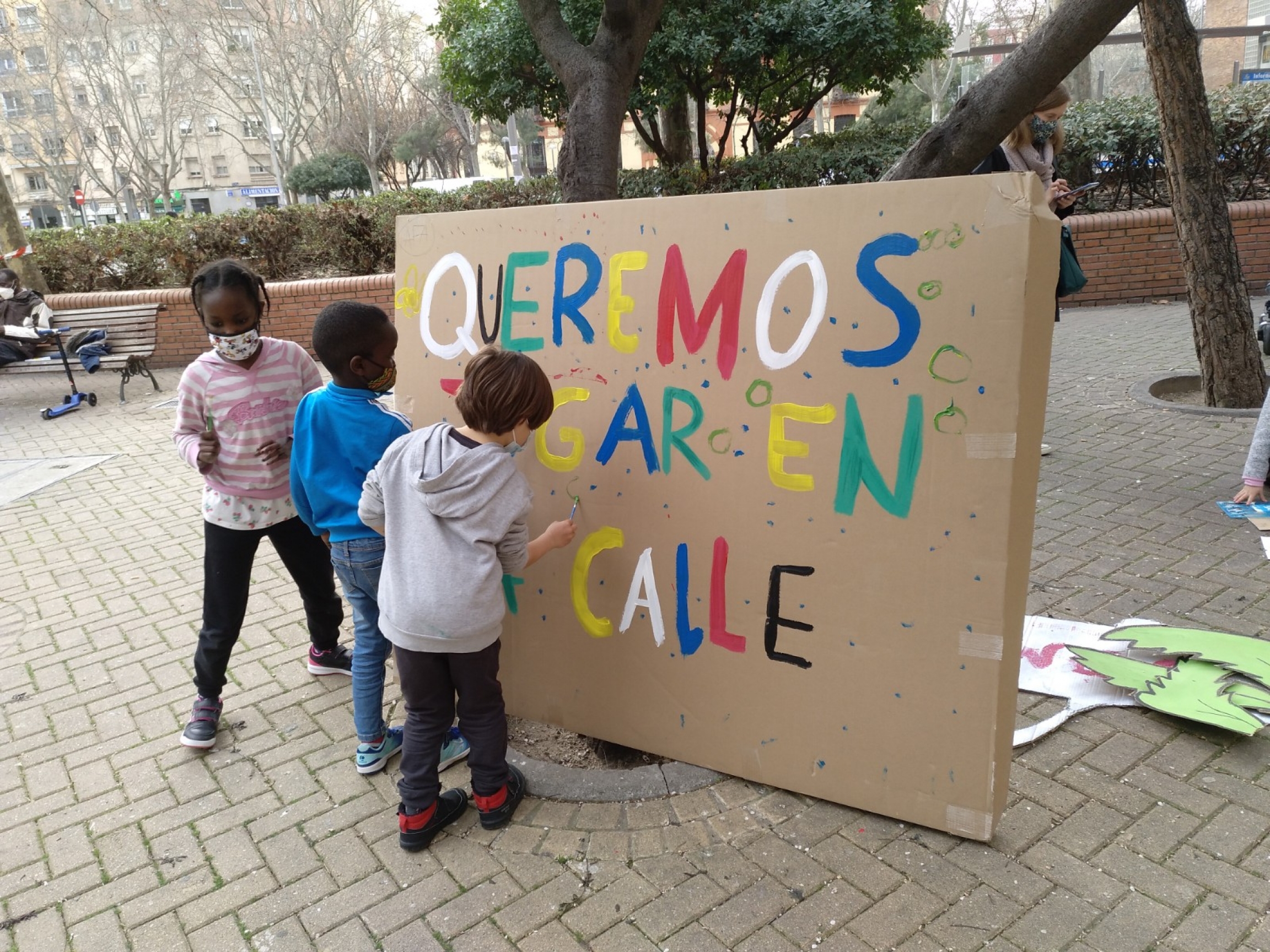 Children and families gather for a Revuelta Escolar (School Revolt) protest near the Menéndez Palayo public school in Madrid.

Spain recently found that children living in its most polluted city neighborhoods weigh less at birth and have a lower life expectancy than their peers in rural areas. Madrid also received the unwelcome accolade of being named the deadliest city for air pollution in Europe based on its levels of nitrogen dioxide.

The opposition to greener transport is led by Madrid Mayor José Luis Martínez-Almeida, who recorded a video of himself stuck in traffic on a motorbike in 2019 as he campaigned to lead the city government. He argued that a largely pedestrian area installed by the previous administration was “impossible” to manage due to the traffic jams it created and proposed scrapping the low-emissions zone.

The mayor promised to allow more vehicles into the city and said his priorities were the shopkeepers and delivery vans that keep Madrid’s economy running.

Mid-pandemic, his party now wants to ban bike parking on the sidewalk.

Esther Gomez, a councilor in the opposition party Más Madrid, believes the pandemic is a missed opportunity for the city to rethink its reliance on gas-guzzling vehicles.

"We are in a battle to achieve more pedestrian space, a need that has grown due to the pandemic, especially around the schools and hospitals.”

“Madrid has a lot of work to do to become a city that’s friendly for cycling and walking — 80% of public space is dedicated to the car,” she noted. “We are in a battle to achieve more pedestrian space, a need that has grown due to the pandemic, especially around the schools and hospitals.”

Although Almeida’s administration did add 7.5 miles of bike lanes during the last year to the streets, campaigners say some sections are unsafe, and the majority of city bike lanes are simply a normal lane of traffic with a bicycle icon and speed limit painted on the road.

The city is now planning to build a giant logistics facility in Villaverde, a southern Madrid neighborhood. Trucks will pass through residential streets to reach the so-called M-40 Logistics Platform. 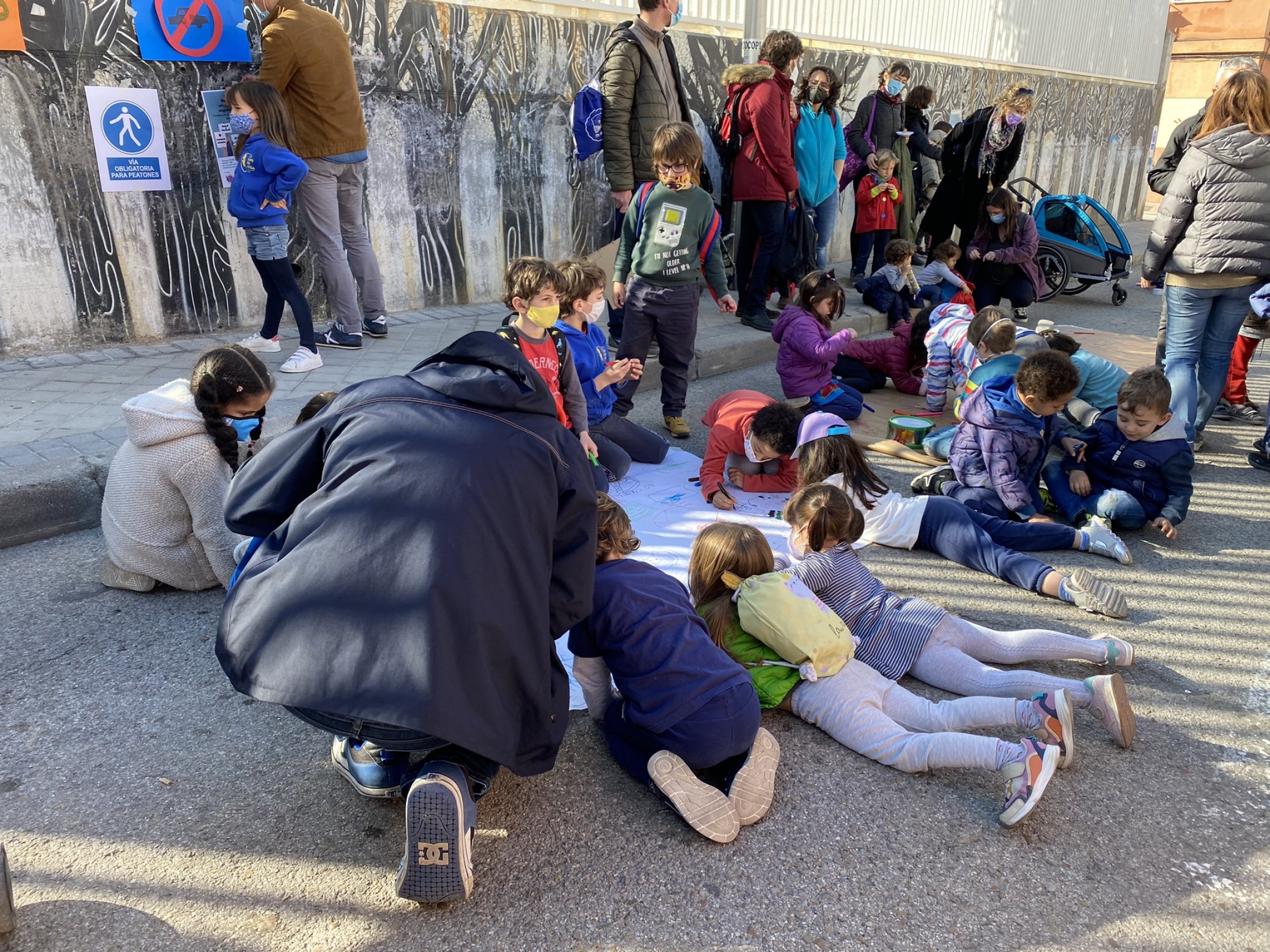 Children and families gather for a Revuelta Escolar (School Revolt) protest in the Carabanchel neighborhood of Madrid.

While School Revolt has taken off, its cousin, Neighborhood Revolt, has already faced opposition from the authorities in its aims to transform very narrow streets into pedestrian zones on weekends.

On one street, Calle Antonio Grilo, Neighborhood Revolt founder Fernando García estimates the pavement is just 2 feet wide, meaning SUVs and trucks often mount the pavement to pass through. In January and February, that road and others nearby were transformed into areas for music, play and food.

“We did this four times successfully, and three other streets with similar problems nearby also joined the movement, and for the last demonstration, we were already five streets,” he said.

Then came a demand he called “absurd.”

“The government ordered us to [protest] just on the sidewalk,” he complained.

The same 2-foot wide sidewalk. The demonstrations, they said, disrupt traffic too much.

The Madrid region announced snap elections last week, and Gomez of Más Madrid is hoping there’s a chance people will make their voices heard on the issue at the ballot box.

“Sometimes, people are more advanced than their political representatives. I really think that the mentality of the people is changing,” she said.

Today, the car is still king in Madrid. But for quite how much longer is anyone’s guess.