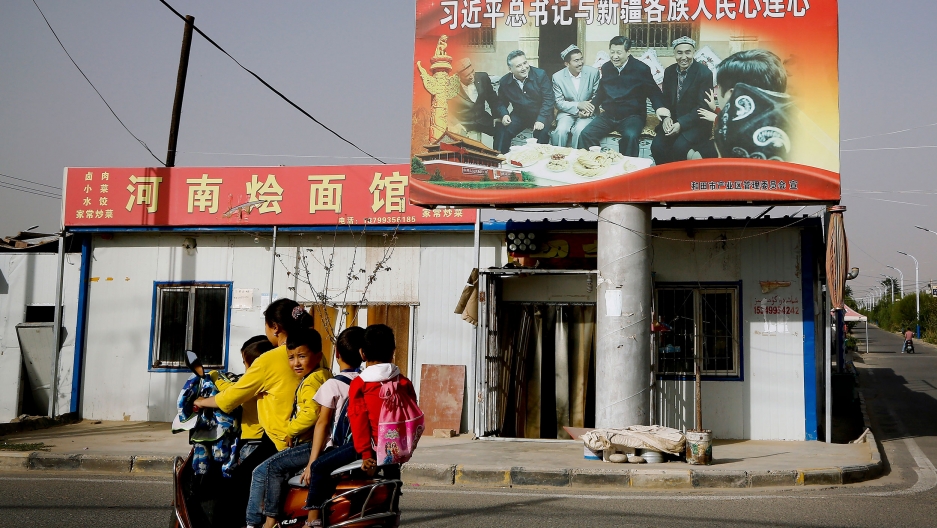 An Uyghur woman uses drives a scooter to fetch school children as they ride past a picture showing China's President Xi Jinping joining hands with a group of Uighur elders, Sept. 20, 2018.

China looked to Europe as an amicable partner as the continent's leaders resisted being drawn into President Donald Trump's conflicts with Beijing over trade, technology and human rights.

On Monday, that image shattered when the European Union joined Washington, Britain and Canada in imposing sanctions on Chinese officials over accusations they abused ethnic minorities. Beijing retaliated by announcing it would penalize four European legislators and a German researcher.

The timing is symbolic. It highlights US-European cooperation two months after Trump, who disdained the trans-Atlantic alliance, was succeeded by President Joe Biden, who wants to form an alliance to confront China.

The penalties are the EU's first against China since Beijing's 1989 crackdown on the Tiananmen Square pro-democracy movement.

"What they have done is a slander and an affront to the reputation and dignity of the Chinese people," said a foreign ministry spokeswoman, Hua Chunying. "They will pay the price for their folly and arrogance."

More broadly, the conflict reflects a decline in China's relations with the West and Asian neighbors including India as President Xi Jinping's government pursues more assertive trade and strategic policies.

The sanctions apply to four senior officials in Xinjiang, the northwestern territory where exiles and human rights groups say more than 1 million people have been forced into detention camps. The officials are barred from traveling in Europe. The EU also froze any European assets of the Xinjiang Production and Construction Corps Public Security Bureau, a paramilitary-style organization that dominates the region's economy.

The Chinese foreign ministry gave no details of penalties against Europeans. But previous sanctions on foreign officials barred them from China, Hong Kong or Macau. Companies associated with them are barred from doing business in China.

The impact is limited, but the public spat is a diplomatic setback for Beijing.

On Tuesday, the Chinese foreign minister joined his Russian counterpart in denouncing the coordinated sanctions. They rejected criticism of their authoritarian systems and accused the United States of interfering in other countries.

"These measures will not be embraced by the international community," the Chinese minister, Wang Yi, said at a news conference with Russia's Sergei Lavrov.

China's dealings with Europe were a bright spot in a diplomatic landscape littered with disputes over Hong Kong, control of the South China Sea and accusations of spying and technology theft. China and India are mired in a territorial dispute in the Himalayas. Beijing has banned most imports from Australia after its government called for an investigation into the origins of the pandemic.

Leaders including Chancellor Angela Merkel of Germany and President Emmanuel Macron of France rejected US tactics after Trump launched a tariff war with China in 2017. They also resisted Chinese efforts to recruit them as allies against Washington.

In December, the two sides finalized an investment agreement despite US objections and European criticism of Beijing's moves to tighten control over Hong Kong. That was widely seen as a snub to Biden and a sign politics wouldn't be allowed to get in the way of business.

It prompted complaints Europe was undercutting its alliance with the United States by giving Beijing a diplomatic victory. Critics called for European leaders to reject the deal. They might if they are antagonized by Beijing's sanctions against European officials.

Europe has long been viewed as more welcoming to Chinese investment following US rejection of a handful of proposed acquisitions on security grounds. Chinese buyers spent billions of dollars to acquire German robot maker Kuka, Swiss agrichemical giant Syngenta and other industrial assets.

That started to change, however, following complaints European countries were losing important technology while most assets in China are off-limits to foreign buyers. Britain, Germany and European Union leaders imposed or recommended restrictions on Chinese acquisitions.

European Union efforts to forge a common China policy are complicated by the conflicting interests of its 27 members.

Germany and France have expressed unease Beijing maybe trying to split the bloc by forming a group with its poorer Eastern and Central European members. Among other potential benefits, Xi promised "vaccine cooperation" during a January video meeting with their leaders.

European governments also are increasingly involved in efforts to challenge Beijing's claim to most of the South China Sea by sending warships through the disputed waters to assert "freedom of navigation."

In February, France sent a nuclear submarine through the sea. Britain says a multinational task force with the aircraft carrier Queen Elizabeth will visit this year. A German warship is due to sail through the region in August.

Relations with Canada have been strained by the arrest of an executive of tech giant Huawei on US charges related to possible violation of trade sanctions on Iran. Beijing arrested two former Canadian diplomats on spying charges in what was widely seen as an attempt to pressure Canada to release her.

The Canadians, Michael Spavor and Michael Kovrig, went on trial Friday and Monday but no verdict has been released.

Prime Minister Justin Trudeau said Monday there was no connection between Canada's support for the Xinjiang sanctions and those cases.

"We understand that we must work together to demonstrate our intolerance in the face of human rights abuses," Trudeau told broadcaster CTV.

Kovrig is a dual Canadian-Hungarian citizen, but the government of Hungarian Prime Minister Viktor Orban has yet to mention his case in public.