Photographer Bassem Khabieh spent time with children in Syria’s rebel-held area of eastern Ghouta, getting to know them and snapping their photos.

In many ways, he tried to stay invisible. Often, he captured them just being themselves: playing in a bouncy castle against the backdrop of a city in ruins. Or, blowing bubbles, looking up at the sky. 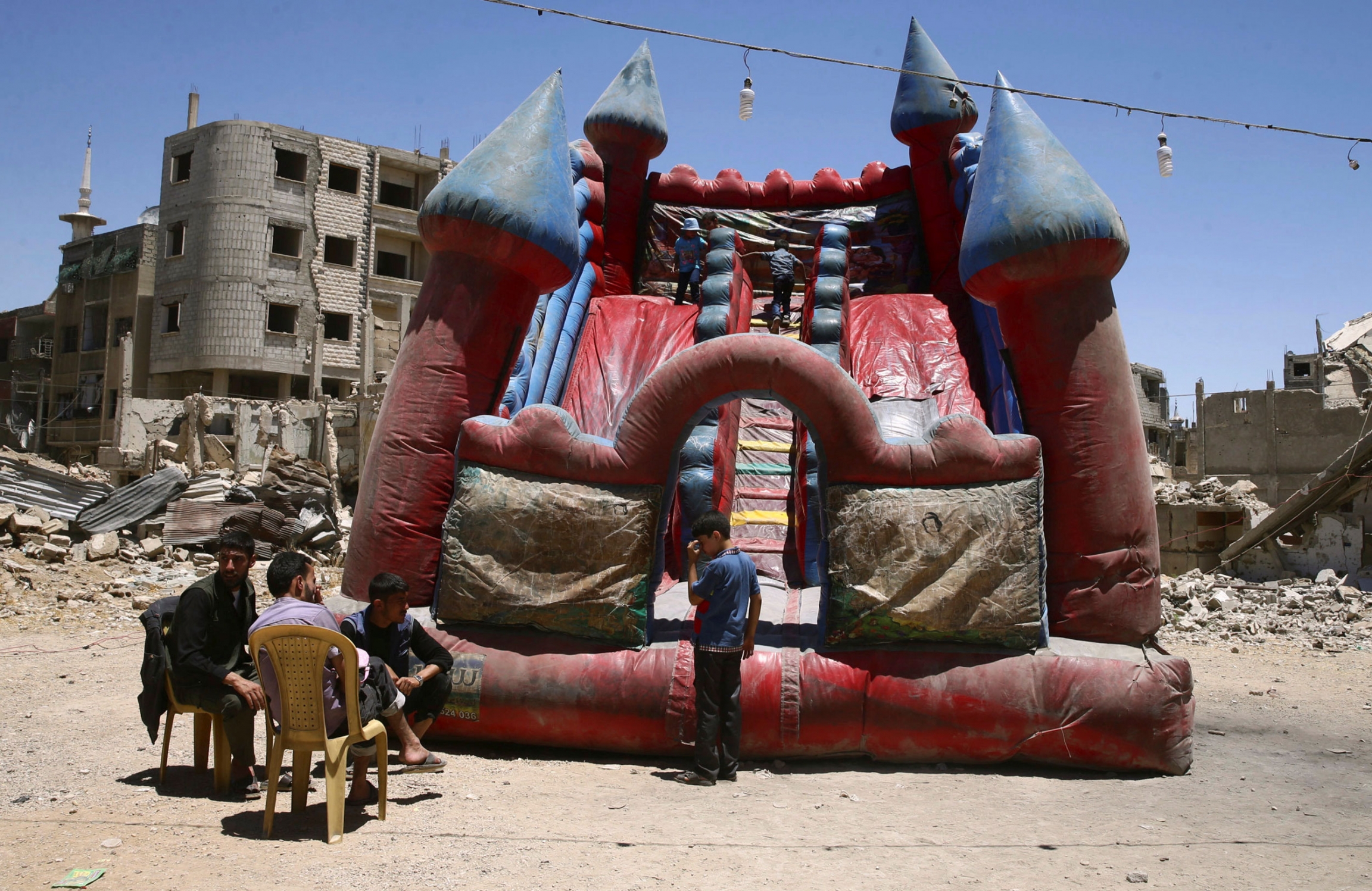 Children play inside an inflatable castle during Eid al-Fitr celebration in the Douma neighborhood of Damascus, Syria, June 26, 2017.

“Children always ask questions,” he said. “They always try to know what I’m holding, about the camera and how it works. They ask me if we will appear on television.”

Those everyday moments — amid small birthday parties and Eid al-Fitr celebrations organized by neighbors or just being at home — were precious to him, and too often, short-lived.

The regime forces and its supporters targeted neighborhoods where families lived, and his photography reflects the violence and atrocities that people have been subjected to in Syria. 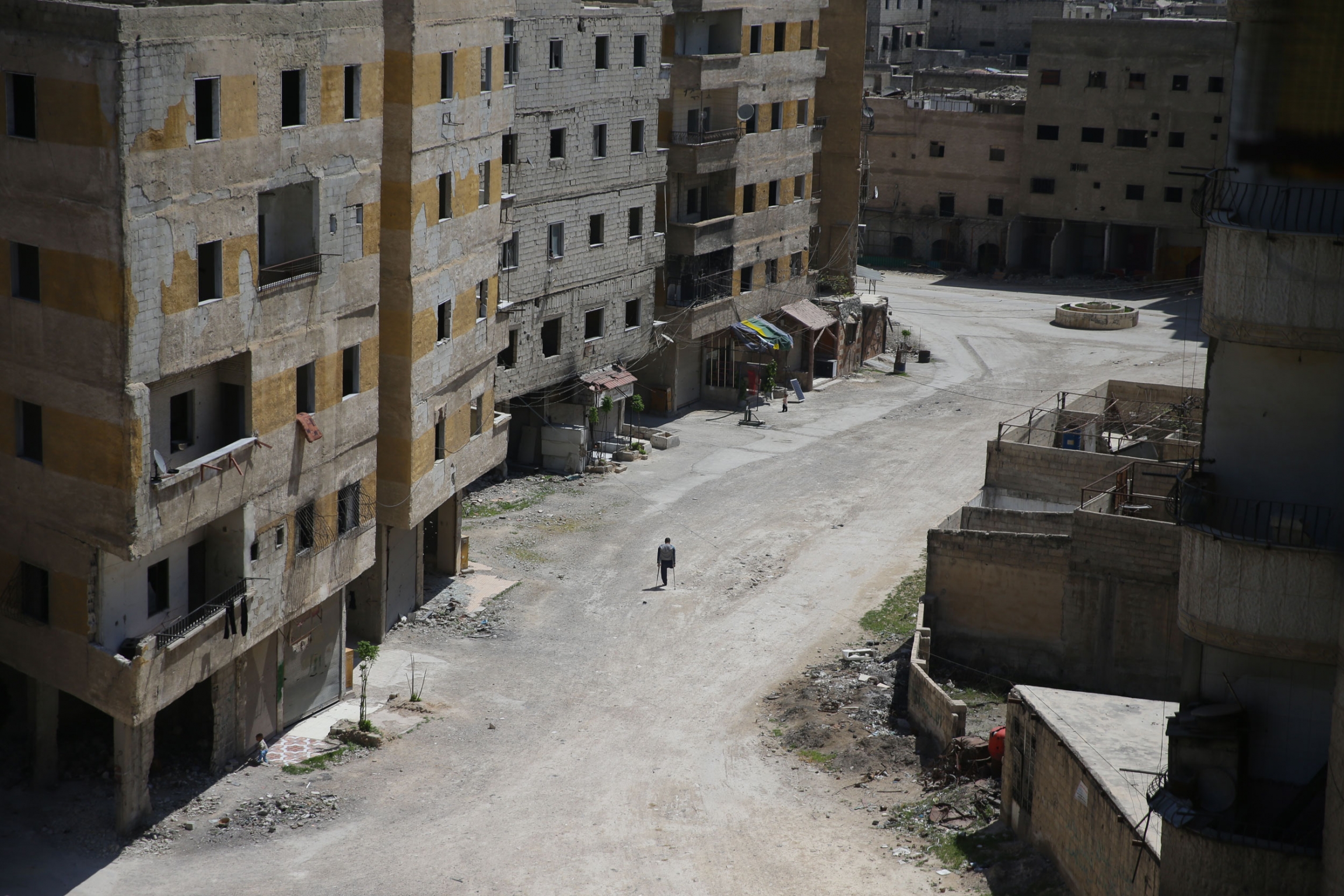 Abu Malek, one of the survivors of a chemical attack that took place in this location in 2013, uses his crutches to walk along a deserted street.

A collection of his photos are now published in a book set to be published this spring, “Witnesses to War: The Children of Syria,” which, through his lens and accompanying text, provides an insider’s account of the impact of the Syrian war on children.

The volume marks 10 years — this week — since the start of the uprising in Syria. More than 380,000 people have died in the war that has left cities devastated and displaced more than half of the population. Hundreds of thousands are missing.

Khabieh’s photos are a window into the war and the unspeakable atrocities that children there have endured.

“We basically owe a debt of gratitude to the work that people like Bassam and several of his colleagues did at the time.”

“We basically owe a debt of gratitude to the work that people like Bassam and several of his colleagues did at the time,” said Alia Malek, journalist, former civil rights lawyer and author of the 2017 book, “The Home That Was Our Country: A Memoir of Syria.”

Malek interviewed Khabieh for the book and wrote the introduction.

Today, Syria is one of the worst places in the world to be a child, according to a report by World Vision International and Frontier Economics.

Children have been gassed, killed, orphaned, uprooted and largely left without an education. Of 600,000 killed, 55,000 were children, and a child’s life expectancy has been reduced by 13 years, the report says.

The charity Save the Children reports that 1 in 3 displaced children in Syria would rather be living in another country. 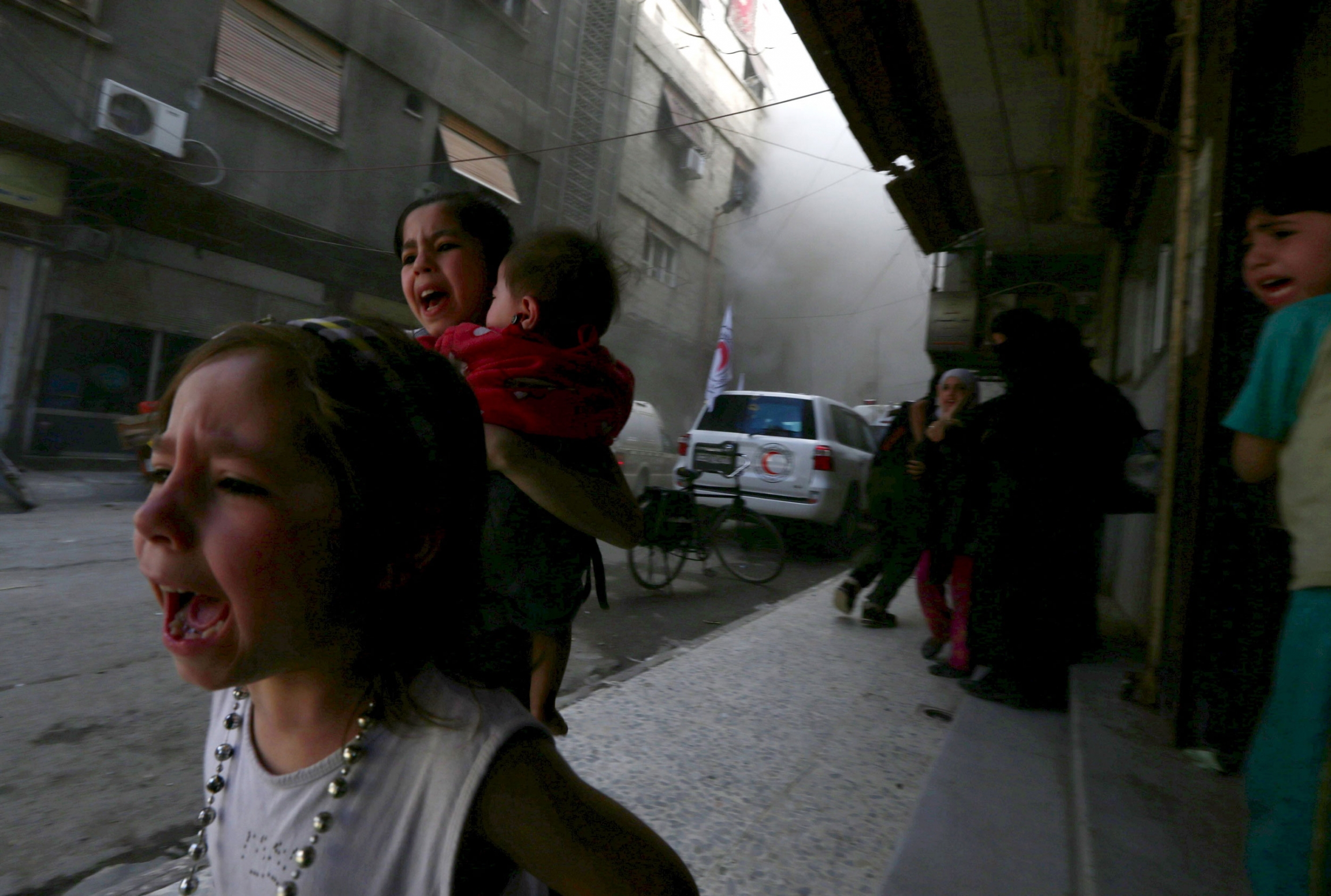 Related: People in northeast Syria are in desperate need of help. Aid groups can’t get to them.

“Month by month, I realized that the most vulnerable in this war are the children,” he recalled.

Some of his photos are hard to look at — such as the ones showing children running out of buildings that had been hit by bombs minutes before; fathers holding their dead children shrouded in white cloth; and the tearful mother who doesn’t have enough milk to feed her newborn, so instead, sticks her pinky in the baby’s mouth to calm her hunger. 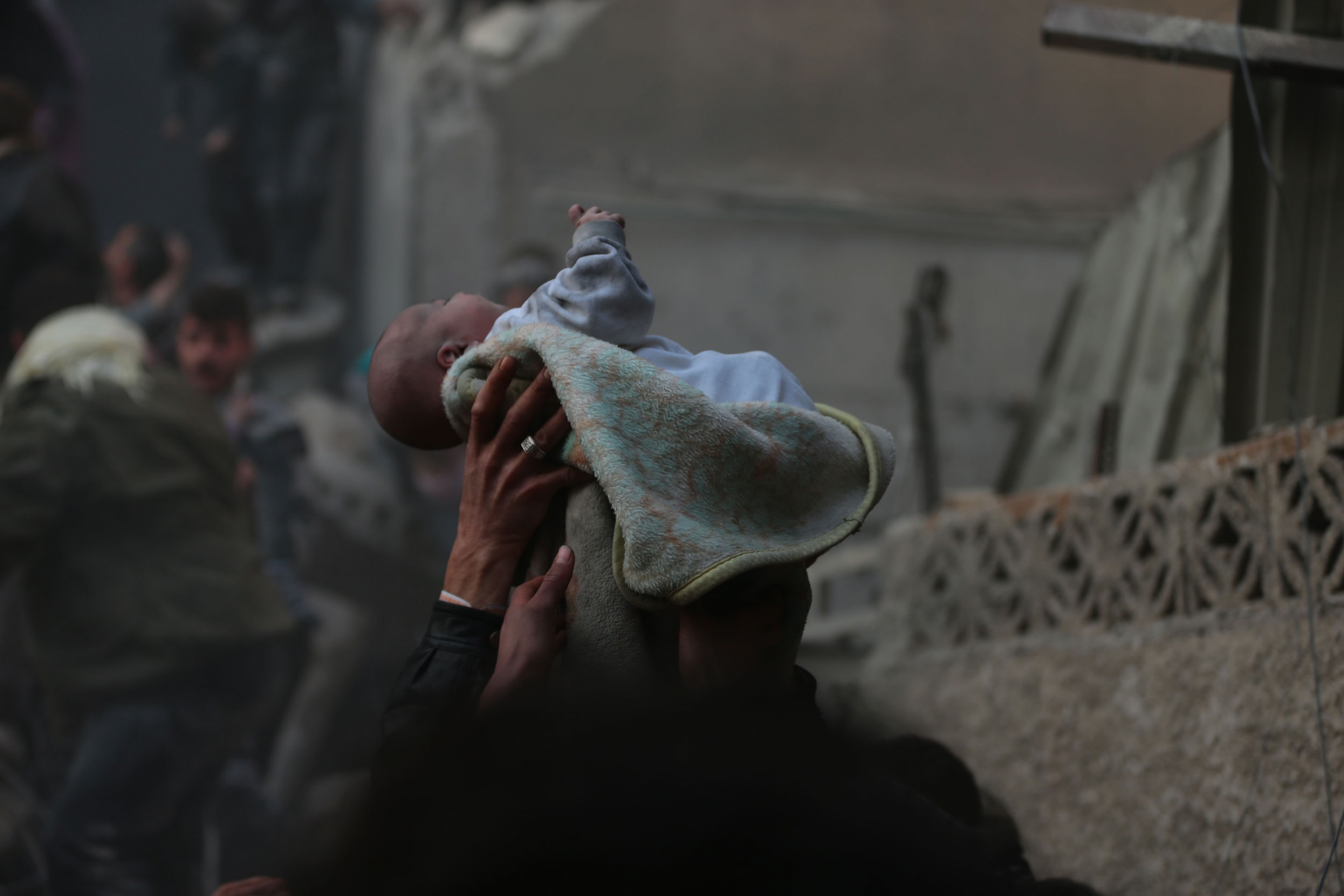 A baby discovered in the rubble after an airstrike is lifted in the air by White Helmets and community members.

But Khabieh didn’t always intend to be a photographer. In 2011, during the early days of the revolution in Syria, he was a computer engineering student in Damascus. People went into the streets, calling for the downfall of President Bashar al-Assad.

Khabieh, using his cellphone at first, took pictures at protests and funerals, making sure not to get anyone’s faces because they could get in trouble with security forces.

“It was very dangerous for anyone to hold a camera, to try to go to the field and report what’s happening in the streets.”

“It was very dangerous for anyone to hold a camera, to try to go to the field and report what’s happening in the streets,” he recalled.

He then uploaded the photos to social media with the hope that the world would learn about what was happening in Syria, he said. 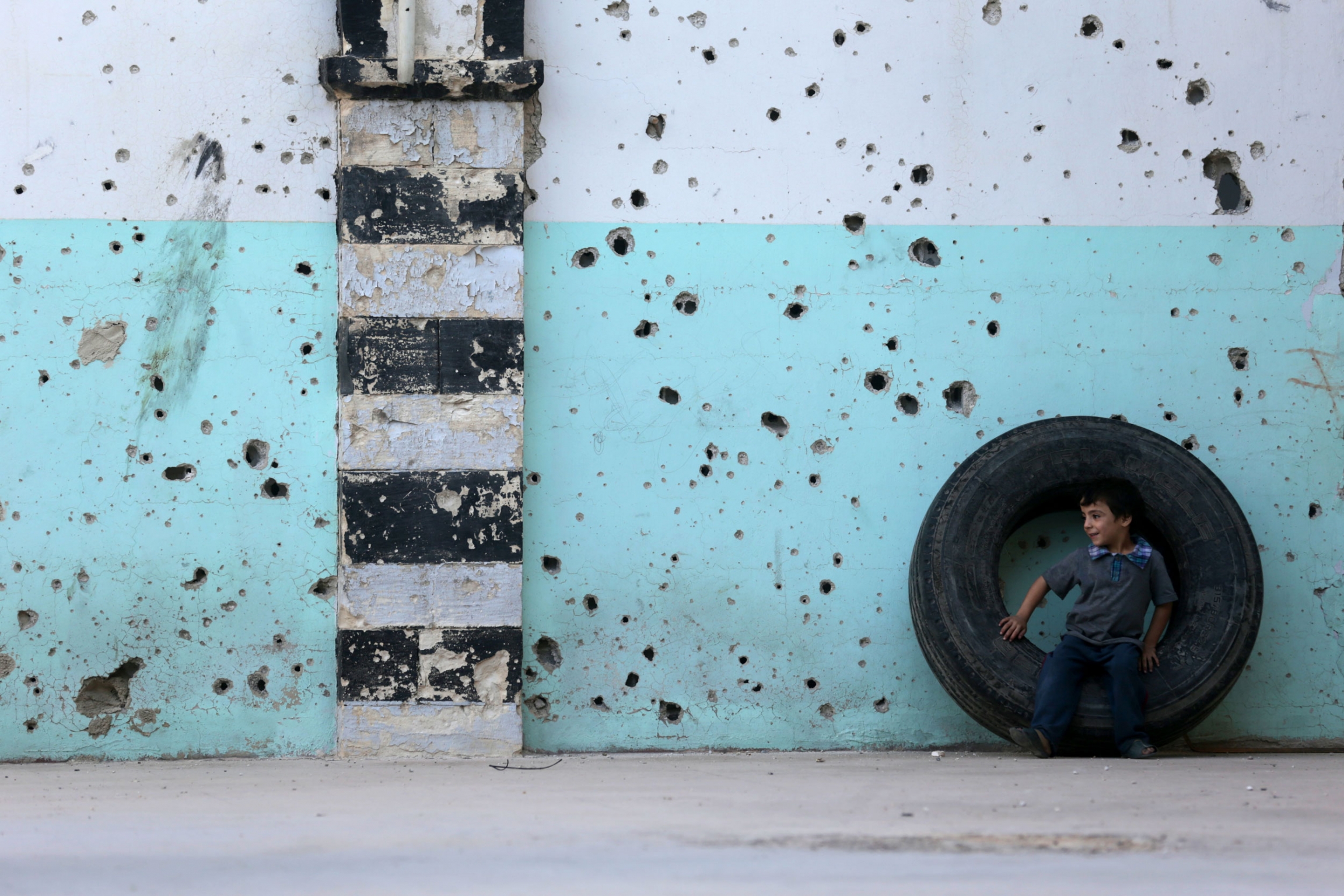 A boy sits on a tire in front of a mosque’s bullet-riddled facade on the first day of the Eid al-Adha holy day.

“I knew how important it is to use photography to document [these] important events for Syrian people,” he said.

Khabieh and Malek both said it’s painful that the world saw plenty of graphic photos and videos coming out of Syria over the years, and yet, decided to look away.

Related: US targets Assad govt and backers with toughest sanctions yet against Syria

By ignoring the atrocities in Syria, Malek said, the world sent a chilling message to protesters everywhere that if they rise up against a powerful dictatorship, they are on their own.

“I think the thing that people don’t realize is that, yes, this specifically happened to Syria but it’s going to become a kind of playbook. In many ways, it’s a playbook for regimes that want to stay.”

“I think the thing that people don’t realize is that, yes, this specifically happened to Syria but it’s going to become a kind of playbook. In many ways, it’s a playbook for regimes that want to stay,” she said. 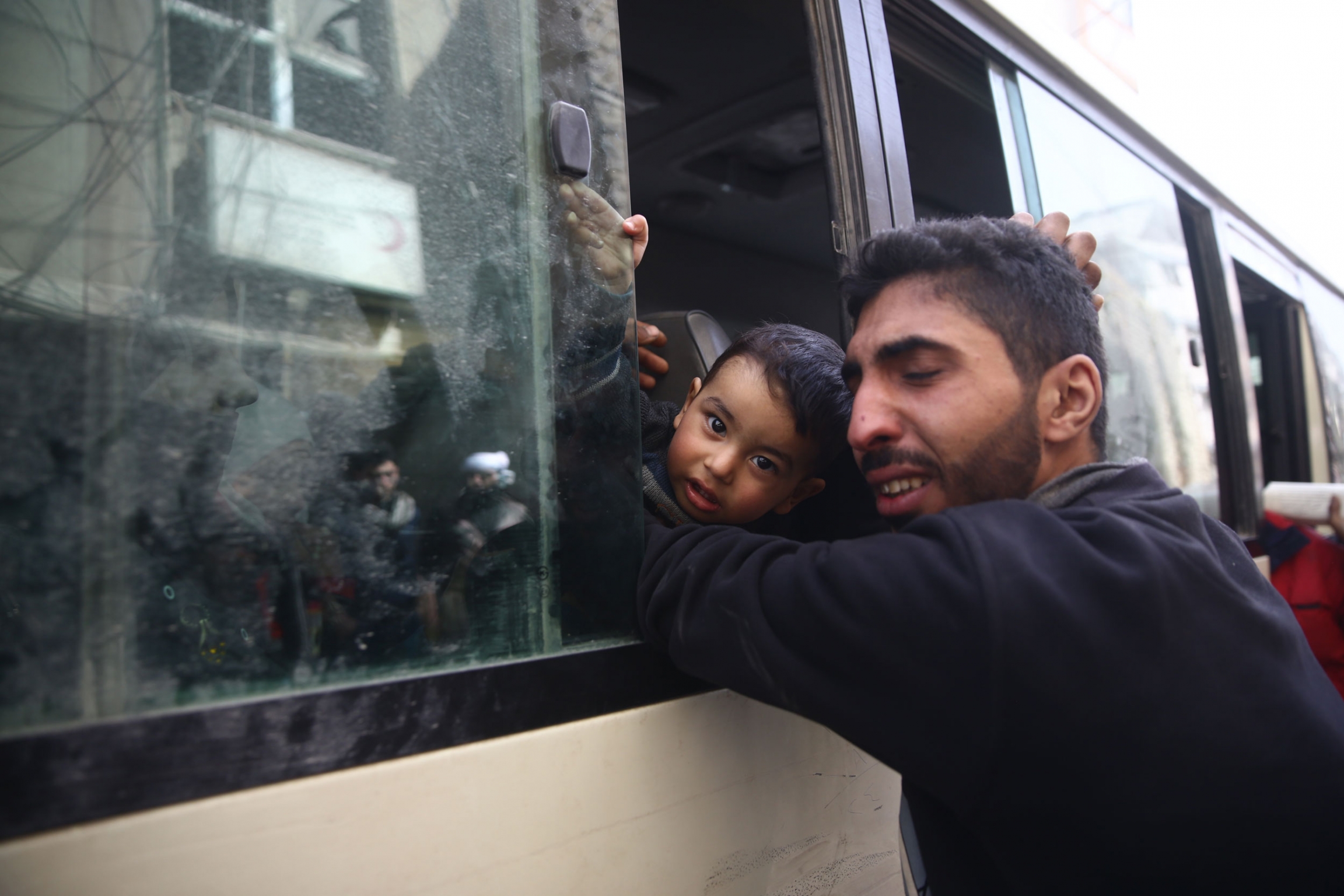 A man hugs his child before the boy is evacuated during a break in the bombing campaign. The negotiations between the government and the rebels holding Eastern Ghouta forced many men to separate from their children and families.

Khabieh left Syria in 2018, after the Syrian regime captured Douma, his hometown. He now lives in Turkey. He couldn’t stay in touch with most of the children he photographed, he said. The war separated them.

But he thinks about them all the time.

“When I look at my pictures, I remember the circumstances and the time and I wonder where are they living now?” Khabieh said.