The Saeki family home in the port city of Ishinomaki, Japan, goes back hundreds of years. Theirs was a close-knit community, and they used to have a beautiful view of the river that flows into the Pacific Ocean.

But all of that changed on March 11, 2011. That day, a 9.0-magnitude earthquake hit Japan — the biggest ever recorded in the country. Tsunami swells reached as high as 62 feet and surged miles inland, affecting an area that stretched 240 miles along the coast.

Related: ‘The Journey Itself Home’: Reflections on moving forward after devastation in Japan

Some half a million people were forced from their homes, many in the region surrounding the Fukushima Daiichi nuclear power plant. Nearly 20,000 died, most from drowning. More than a million homes were damaged or destroyed, and damage estimates tipped into the hundreds of billions of dollars.

Today, some affected areas in the Tohoku region of Japan have been rebuilt and show no signs of the devastation of a decade ago. But the rebuilding effort is far from over.

More than 42,000 people are still displaced, most of them former residents of nine no-go zones in Fukushima, where the government is barring the return of residents due to radiation risks. Cleanup at the power plant is expected to last up to 40 more years.

Ishinomaki was one of the municipalities hardest hit by the tsunami. 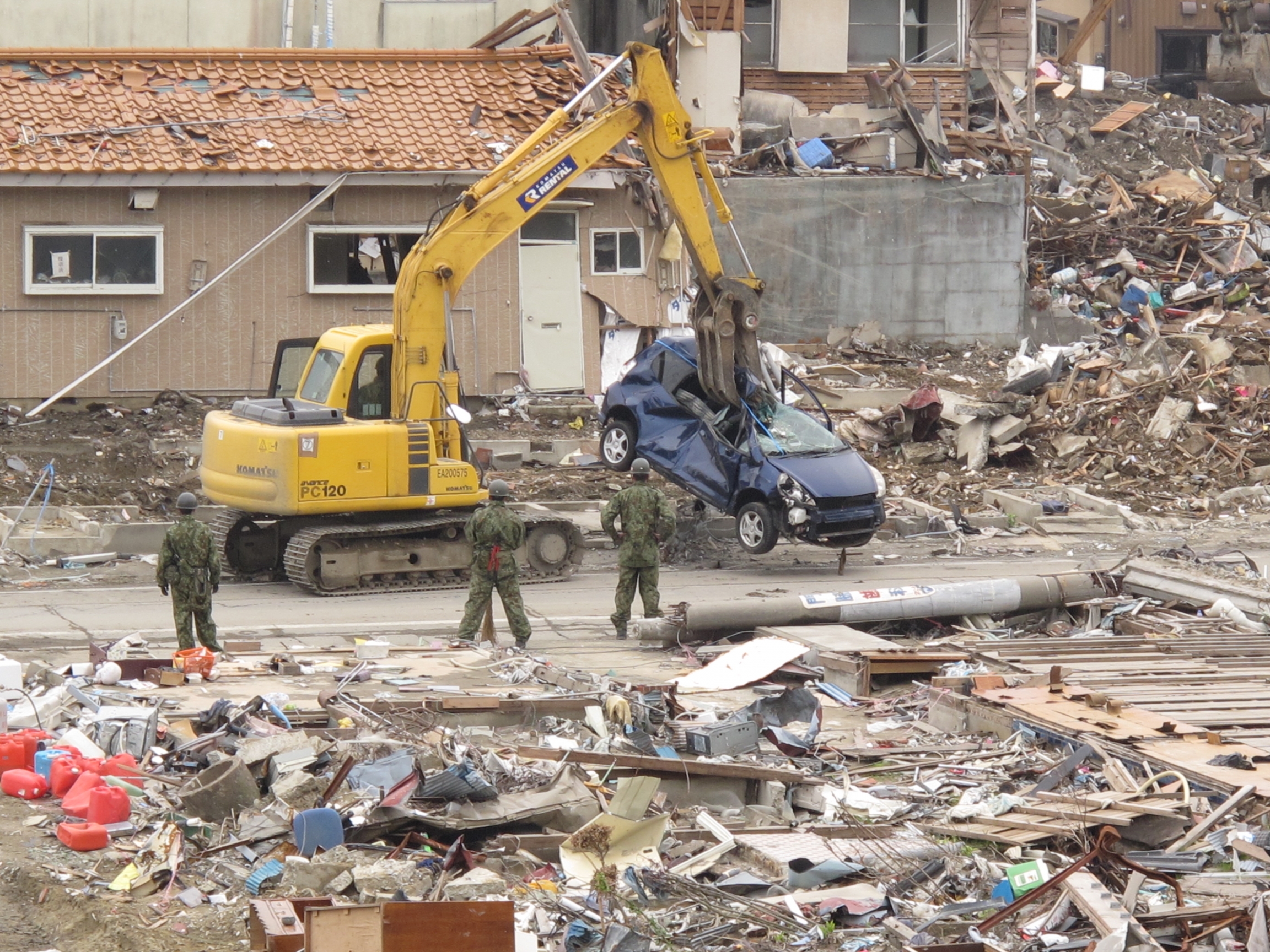 A loader crane moves a destroyed car from the road in Ishinomaki, Japan.

In May of 2011, when The World visited the city, construction crews were at work clearing away parts of destroyed houses and cars that had been crushed by the surging sea. On the ground, still sticky with a layer of mud, details from residents' lives were visible to anyone walking by: old photo albums, record collections, baby monitors. Clocks that stopped the moment the disaster struck.

Back then, the Saekis were processing the immensity of what had happened. They have since returned to their house in Ishinomaki and consider themselves fortunate, but 10 years later, they are still struck by how much the landscape and their lives have changed since that day.

The World revisited their story and also asked them this month about how they continue rebuilding their lives, day by day, even amid the pandemic.

Aya Saeki lived near the ocean in Ishinomaki with her mother and father, teaching piano out of a house their family had lived in for generations.

On the day of the quake and tsunami, they managed to get to higher ground and escape the water. They watched from a nearby hill as their neighborhood got eaten up by the sea.

Related: This group in Japan is on a mission to correct English mistranslations

The piano she taught students on was swept outside by the tsunami and destroyed. It looked like a truck had run over it. 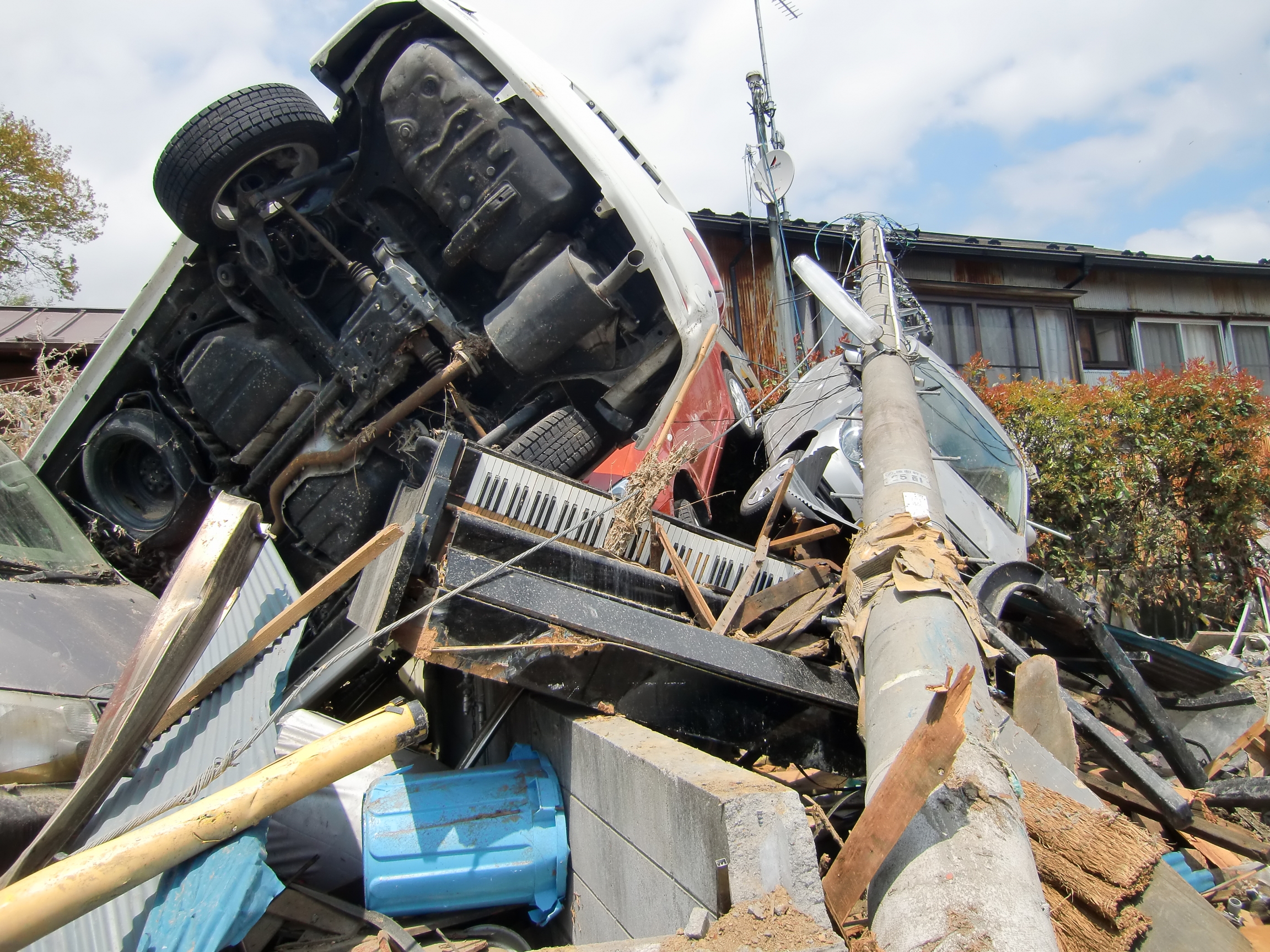 The piano Aya Saeki taught students on was swept outside by the tsunami and destroyed.

Their house was unlivable after water ripped through the first floor. Even months after the disaster, it was unsafe to stay there, but they knew they eventually wanted to return.

“We are a really a tight community, we all get along really well, we’ve all been here from our parents’ generation,” Eiko Saeki, Aya Saeki’s mother, said in 2011.

Coming back to visit their devastated neighborhood in the aftermath back then, she said, “we see our neighbors’ faces, even if it’s two or three people, and we talk. And at first, everyone was wondering if we should come back, but now we all say together, ‘Let’s come back here, let’s rebuild, let’s have a community together.’” 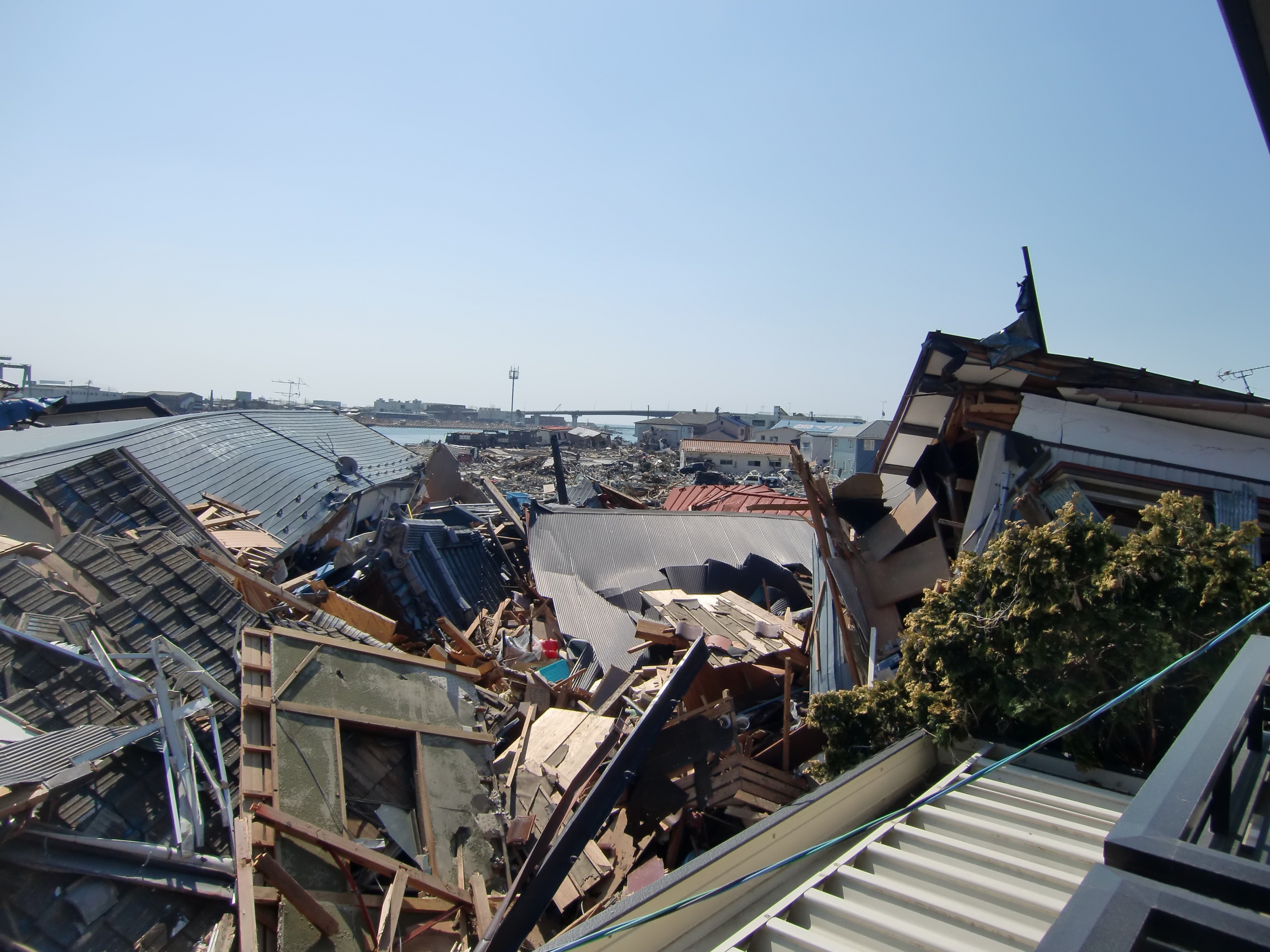 Ishinomaki after the tsunami destroy much of the area, 2011.

In Ishinomaki, where the Saekis live, the population has declined by nearly 20,000 people — to around 140,000 — since before the tsunami.

A whole neighborhood just a few blocks away was completely wiped out and deemed unsafe for return. Immediately surrounding their house, streets that used to be tightly packed with traditional Japanese houses are now half-empty.

'We were there to make each other feel better'

The summer after the disaster, their house still unlivable, the Saekis rented an apartment in town and Aya Saeki started teaching piano lessons again.

Many of her students had lost their parents or grandparents, and she saw the music lessons as an opportunity to “heal some of their scars.”

“I spent more time not just teaching piano but talking about other things. I thought I was sending them home happier, but now that I think about it, there were times that I was the one who was receiving their energy and feeling better. We were there to make each other feel better.”

“I spent more time not just teaching piano but talking about other things,” Aya Saeki told The World in an interview this month. “I thought I was sending them home happier, but now that I think about it, there were times that I was the one who was receiving their energy and feeling better. We were there to make each other feel better.”

Two years after the disaster, the family was able to move back into their home. They gutted and rebuilt the first floor, which had been destroyed by the tsunami. The second floor was kept the same.

“I like Ishinomaki,” Aya Saeki said. “And the Saeki family has lived in this house for over 300 years, so we thought it would be best to return.”

They’re thankful to be back and to be alive. 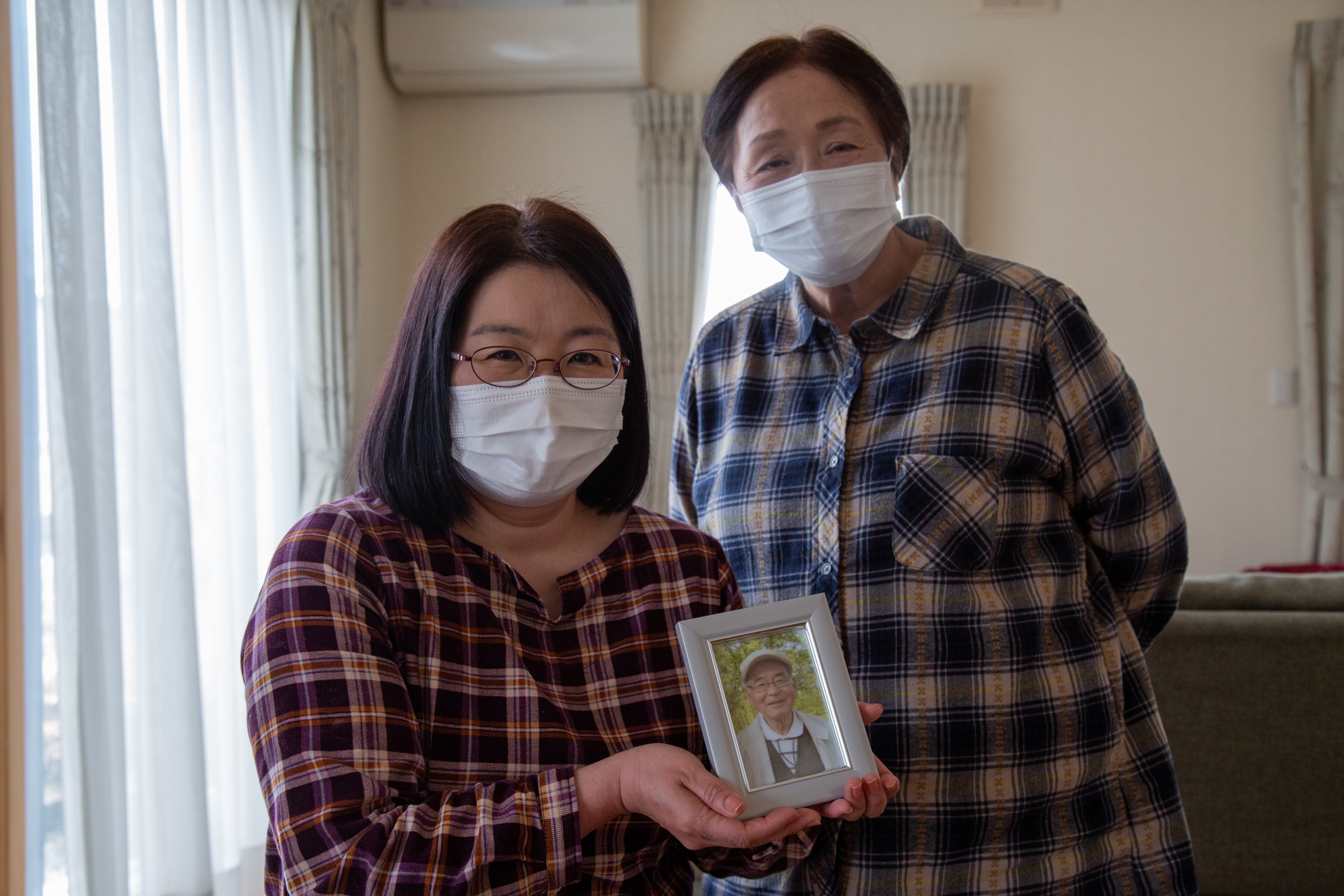 Aya Saeki (L) holds a portrait photo of her father while her mother stands behind her.

More than 3,000 people across Ishinomaki alone did die, and up and down the northeast coast, nearly that many people are still considered missing.

“They can’t be declared dead if the body is not found. I have a cousin whose wife was swept away by the tsunami near the Onagawa River. My cousin became a certified diver to look for his wife. He’s still diving today.”

“They can’t be declared dead if the body is not found,” Eiko Saeki said. “I have a cousin whose wife was swept away by the tsunami near the Onagawa River. My cousin became a certified diver to look for his wife. He’s still diving today.”

The government has spent $295 billion rebuilding the region, and in Ishinomaki, construction provides the constant soundtrack of reconstruction.

A bridge and water pump station near the Saeki home are being worked on, and they can hear the rumble of trucks passing from their living room.

Where they once had a scenic river view, they now look out onto an embankment that’s supposed to protect them from future flooding.

It’s a smaller, inland version of the enormous concrete seawalls that have been built along the country’s northeastern coastline to protect from future tsunamis. They’re up to 50-feet high, and when a section in Fukushima is complete, they will stretch 270 miles.

Critics say the walls cut residents off from the sea. But the Saekis say the earthen river embankment just outside their home doesn’t make them feel much safer.

“I have seen firsthand how nature is more powerful than what humans create, so I don’t feel entirely safe.”

“I have seen firsthand how nature is more powerful than what humans create, so I don’t feel entirely safe,” Aya Saeki said.

The small, tight-knit neighborhoods that had their own identities for hundreds of years, they say, have disappeared.

“There were many old traditional houses, lots of houses all close together,” Aya Saeki said. “Now there are only a few.”

Uphill from the Saeki’s house, where the family sought refuge from the tsunami, there's a park with a Shinto shrine where they sometimes go to reflect on the souls lost 10 years ago.

Near the shrine, an elementary school that caught fire during the earthquake has been standing as it was left on that day, curtains hanging out of broken windows shattered by the earthquake and black soot marks throughout the building.

The ruin is now being turned into an official memorial. 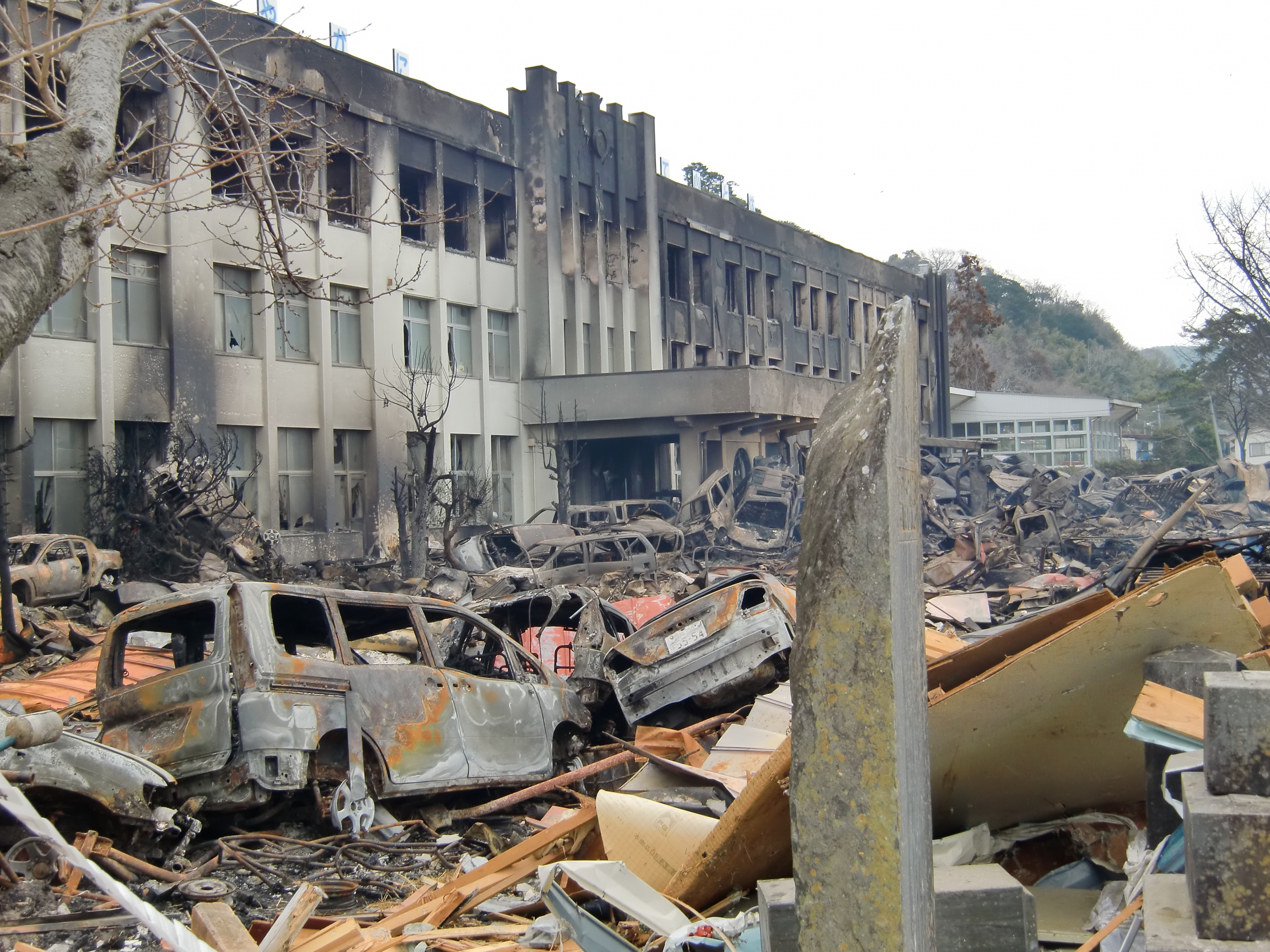 An elementary school in Ishinomaki that caught fire following the tsunami in 2011. 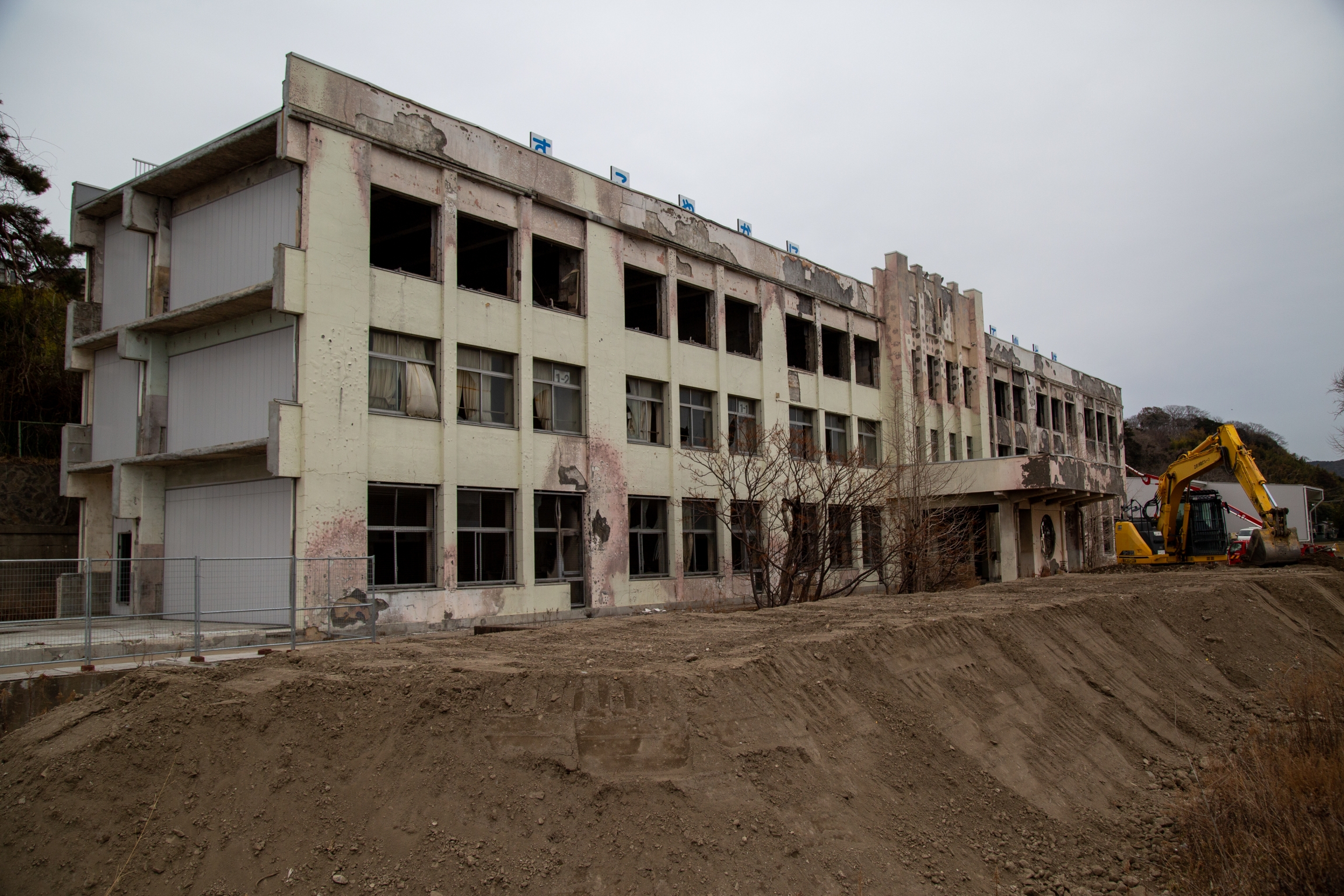 The same elementary school in Ishinomaki is shown in 2021, largely unchanged since a fire destroyed it following the 2011 tsunami.

From the vantage point on a hill, it’s clear how barren this part of Ishinomaki still is.

“There were stores, a hospital, post office, bank and supermarket. There were also a lot of people. The entire town disappeared, so comparing my memories of the town to how it is now makes me miss it and feel sad,” Aya Saeki said while on a visit to the park last week.

“Around this time [of year] is when you’re reminded. Most of the time, you’re busy with everyday life, so it’s not like you think about it all the time.”

“Around this time is when you’re reminded,” Eiko Saeki said. “Most of the time, you’re busy with everyday life, so it’s not like you think about it all the time.”

With the population density much lower in this area, the Saekis say the sense of community has expanded beyond old neighborhood boundaries.

Now, festivals and community activities draw people from a much larger part of the city.

So their community has changed. But, Aya Saeki says, its importance has not.

“After the COVID-19 pandemic hit us, I realized that during the disaster, we were able to laugh, cry and do things together. Now, that’s not possible, and that’s what is difficult,” Aya Saeki said. “So, now that I look back, I can see how it was important that we were there for each other.”

Living through the triple disaster in Japan has given her a perspective on how to survive the slower-moving disaster of the pandemic.

“We have to place importance on what is happening right now and the people we are with right now,” Aya Saeki said.

“The same for tomorrow and the day after tomorrow. Be grateful of the people who have passed and the people who you have in your life now, and that will create the future.”

Additional reporting contributed by David Caprara in Ishinomaki and The Associated Press.