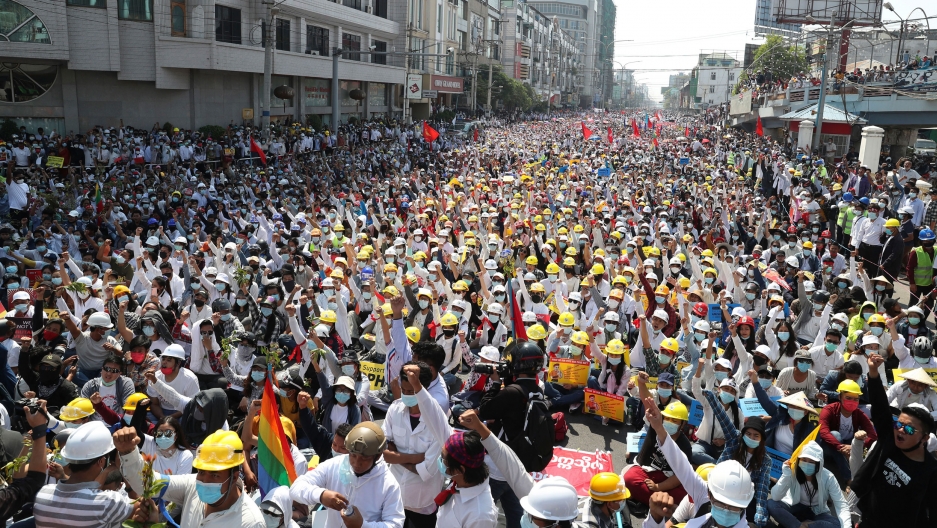 Anti-coup protesters raise their hands with clenched fists during a rally near the Mandalay Railway Station in Mandalay, Myanmar,  Feb. 22, 2021.

A general strike in Myanmar on Monday saw businesses, factories and other workplaces shuttered across the country despite the military junta’s warnings against such a move. The nationwide strike was dubbed 22222, for the five twos in Monday’s date.

Simultaneously, thousands of protesters took to the streets in multiple cities in mass demonstrations against the military coup and in favor of restoring power to the elected government of Aung San Suu Kyi. After a violent weekend, protesters faced off against authorities who used water cannons against them and continue to threaten lethal force. The diverse protest movement continues to defy military leaders who took control of the country in a coup on Feb. 1.

“I am joining the 22222 nationwide protest as a citizen of the country,” said a 42-year-old protester and business owner. “We must join the protest this time without fail. So I’ve closed down my factory and joined the demonstration.”

Iran may be backing away from its threat to sharply curtail access to international inspectors from its nuclear program and instead will offer the International Atomic Energy Agency (IAEA) inspectors “less access” to its nuclear facilities. The move came after IAEA head Rafael Grossi made an emergency trip to Iran for talks that produced a “technical understanding” with Tehran to continue to allow monitoring for three months.

Just one year after the first confirmed COVID-19 fatality in the US, the country is on the verge of crossing a grim milestone: 500,000 lives lost to COVID-19. Globally there has been almost 2.5 million deaths and more than 111 million infections. President Joe Biden will hold a moment of silence at the White House. In Italy, where the virus has killed more than 95,000 people, it’s also been one year since the country announced its first known locally transmitted COVID-19 case — the first in the West. And in China, where the first known cases of the new coronavirus were identified, the World Health Organization is now processing the information of the origins of the Sars-CoV-2 virus following phase I of an investigation in Wuhan. 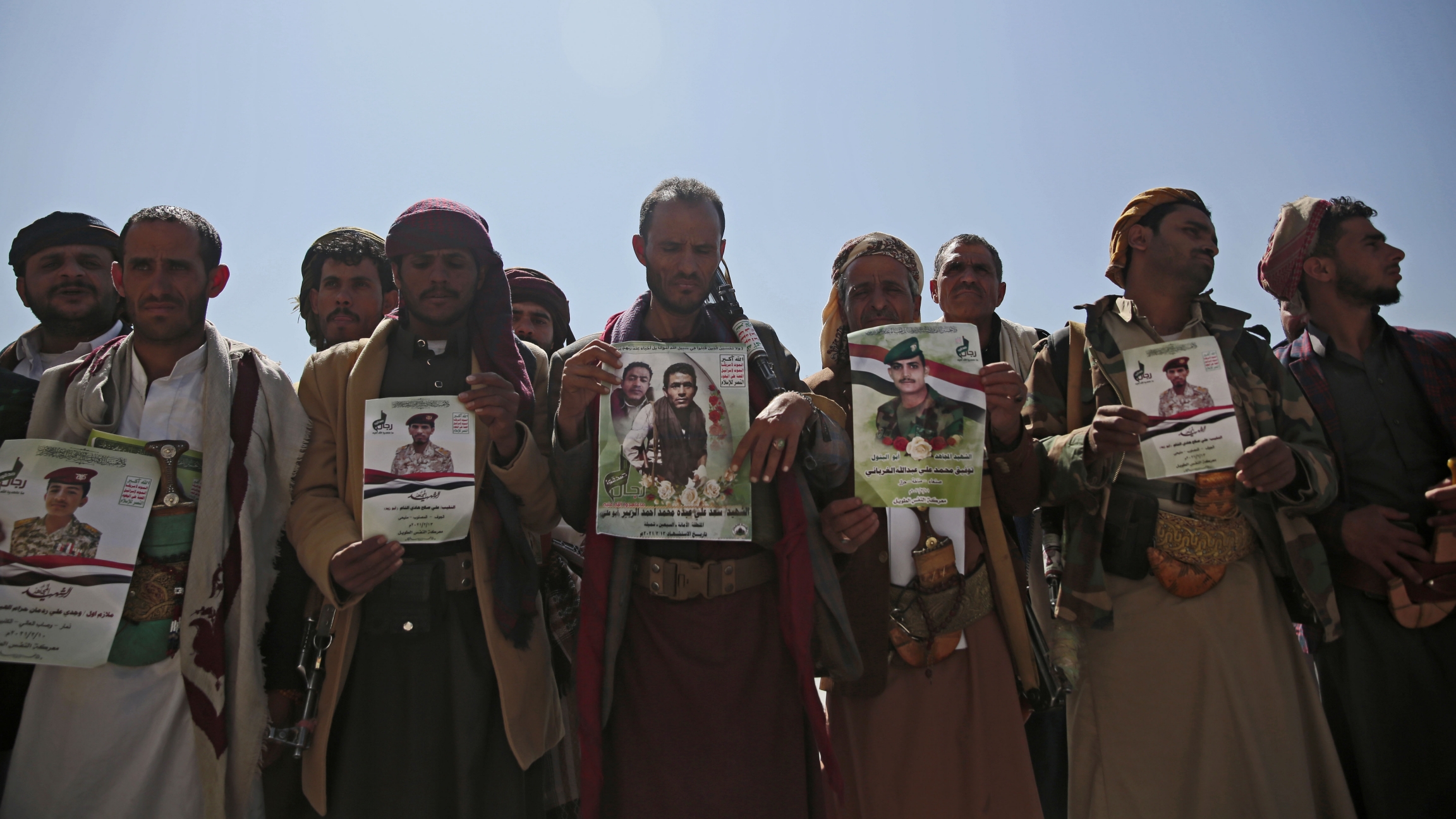 Houthis rebels hold posters of their relatives during a funeral procession for Houthis who were killed in recent fighting with forces of Yemen's Saudi-backed internationally recognized government, in Sanaa, Yemen, Feb. 16, 2021.

The Houthi militias, who control Yemen's capital city, Sanaa, and much of the country, have renewed their military campaign to take over the city, located just 75 miles east of the capital.

Resistance fighters are defending Marib with military support from Saudi Arabia. This is happening just as a change in the White House signals a renewed effort to end the Yemen war — diplomatically.

Nadwa al-Dawsari, a scholar at the Middle East Institute, tells The World what’s at stake with this new push to take control of Marib. 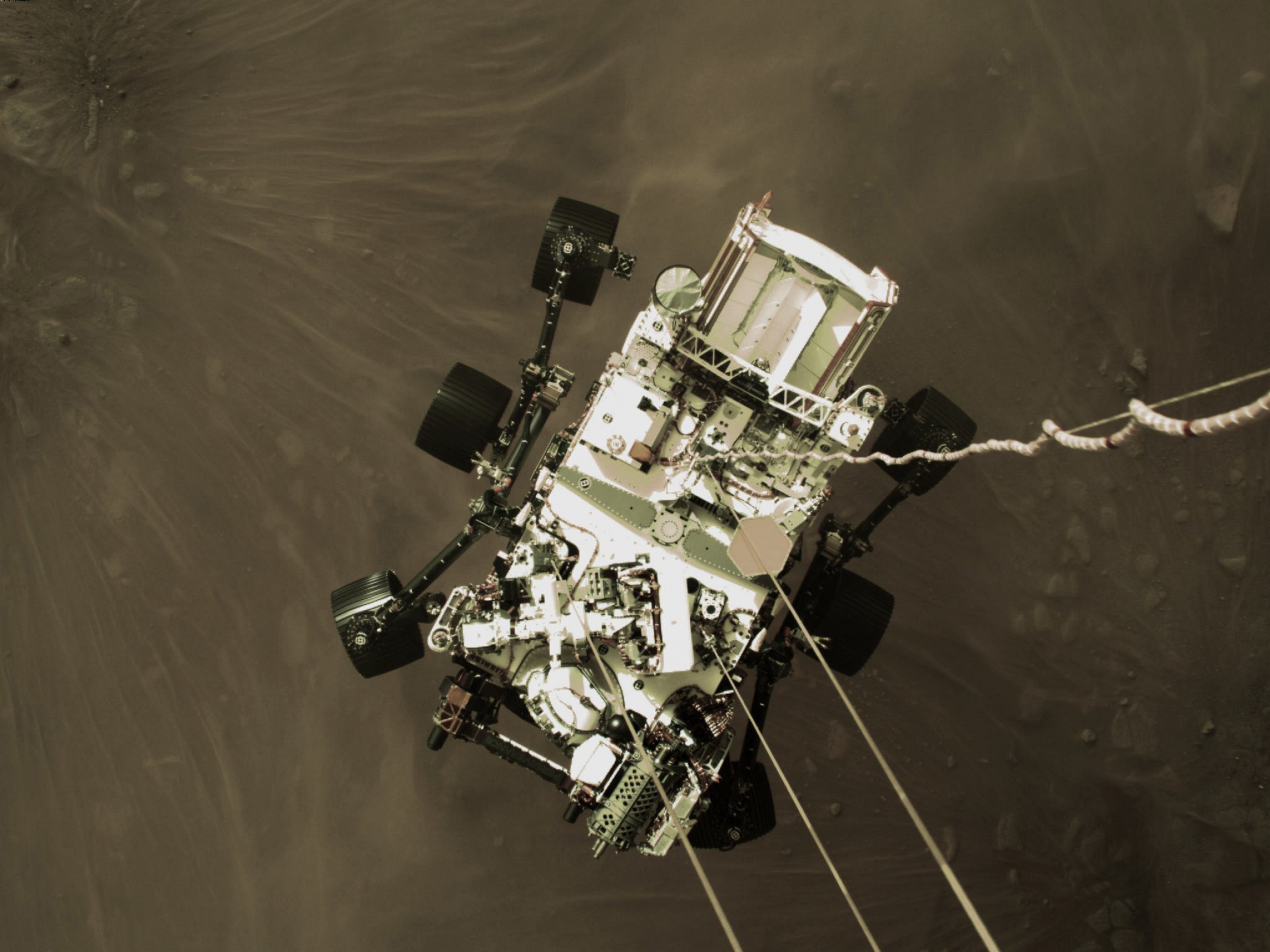 This Feb. 18, 2021, photo provided by NASA shows the Perseverance rover lowered toward the surface of Mars during its powered descent.

On Thursday, humankind witnessed an amazing achievement in space exploration: the landing of NASA’s Perseverance rover on Mars.

The presentation of the mission was also notable: It was accompanied by NASA’s first-ever Spanish language broadcast for a planetary landing. The show was called “Juntos perseveramos,” or “Together we persevere,” and was hosted by NASA aerospace engineer Diana Trujillo.

🥖The French baguette, a skillful mix of flour, water and salt,  could soon join Belgium's beer culture and Naples' pizzaiuolo — the art of  twirling pizza dough and baking it in a wood-fired brick — on UNESCO's representative list of the intangible cultural heritage of humanity.

The Confederation of French Bakers submitted an application to UNESCO, aiming to protect a know-how that has been passed through generations and shield this French craft from alleged imposters around the globe. 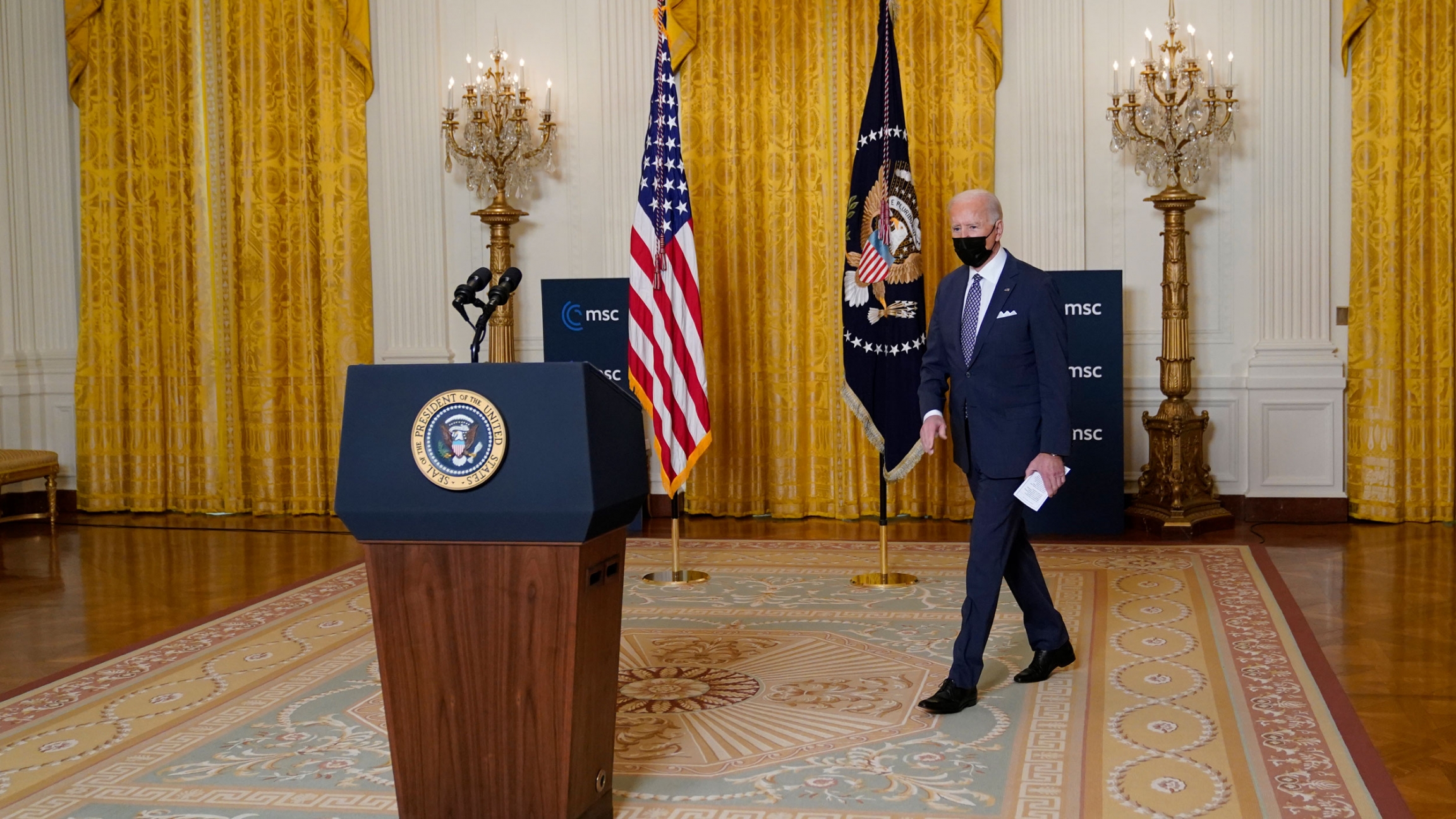 President Joe Biden arrives for a virtual event with the Munich Security Conference in the East Room of the White House, Feb. 19, 2021.

In a break from the previous administration, the White House announced that it is ready to meet with Iran and other signatories of the 2015 nuclear deal. And, getting soldiers and militias fighting wars to lay down their weapons for a vaccine rollout seems unlikely. But Norwegian Refugee Council Secretary General Jan Egeland suggests it can happen, and it can be a first step to ending conflicts. Also, landing of Perseverance rover on Mars was accompanied by NASA's first-ever Spanish language broadcast for a planetary landing.