A new mural going up on the side of the Eighth Street Deli Mini Mart in Astoria, New York, honors the life of Moustafa Kassem, an Egyptian American taxi driver who died in an Egyptian prison.

The art was sponsored by human rights advocacy group, The Freedom Initiative, as a symbol of its renewed commitment to ensuring the US holds Egypt accountable. That’s despite news this week that Egypt jailed several relatives of The Freedom Initiative’s founder, Mohamed Soltan, likely in response to Soltan’s criticism of Egyptian President Abdul Fattah al-Sisi.

Related: 10 years after the Arab uprisings, Egypt at 'lowest point' for human rights

“[Moustafa Kassem's] death sort of revived our reasoning for existence. ... His name will be remembered not just as a failure of US foreign policy, but to remind people that it's not just him.”

“His death sort of revived our reasoning for existence,” Soltan said of Kassem. “His name will be remembered not just as a failure of US foreign policy, but to remind people that it's not just him.”

Soltan said that Egyptian police responding to a sit-in arrested Kassem in 2013 when he was visiting family. He was held in pretrial detention for over five years before being convicted and sentenced to a 15-year prison term as part of a mass trial with more than 700 other defendants; no personalized evidence was ever presented against him.

“It's very similar to stories that happen here especially with the wave of protests we had in June and July. ... I, like probably a lot of people, also thought that this wouldn't be able to happen because he was an American citizen.”

“It's very similar to stories that happen here especially with the wave of protests we had in June and July,” said the mural’s lead artist Brandi Jones, of Black Village Arts, a group that promotes art education. “I, like probably a lot of people, also thought that this wouldn't be able to happen because he was an American citizen.” 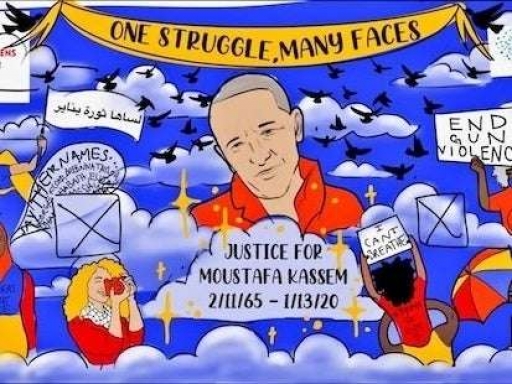 A colorful mural honoring the life of the late Egyptian American Moustafa Kassem.

That’s what Kassem thought, too — that being American meant the US government would eventually see to his release.

“I remember the first time I laid eyes on him,” said Soltan, who met Kassem in an Egyptian prison. “People were like, ‘This is the other American that's in the prison.’ I remember thinking, “What the hell is a man like that doing in a place like this?””

Soltan, an Egyptian American who grew up in the Midwest, remembers Kassem as a small, soft-spoken man with a gentle soul, clad in a white prison jumpsuit. Soltan was also arrested in 2013 for his involvement in protests against the Egyptian government. He was tortured as a high-profile political prisoner. Soltan wrote a letter to then-President Barack Obama that was published in The New York Times, and the administration secured his release in 2015. Soltan had to leave Kassem behind.

“I promised him that I will do everything in my power to try and get him out of prison,” Soltan said.

He started The Freedom Initiative in Washington, DC, and lobbied incessantly. Former Vice President Mike Pence, Secretary of State Mike Pompeo and President Donald Trump all called for Kassem’s release. In December 2019, Soltan said the State Department told him they were close to freeing him. Soltan called Kassem’s family to cautiously share the good news.

But Kassem died before anything could happen. He went on a hunger strike to protest for his release and his body gave out on Jan. 13, 2020. He was 54 years old. Soltan called Kassem’s family again — this time,  to offer condolences.

“And his teenage daughter was rightfully screaming at me. She said, ‘You told us he was going to get released. You told us. You just called us last week. You told us there was progress,’” he said. “And I literally had no words. All I can say is ‘I'm sorry.’” 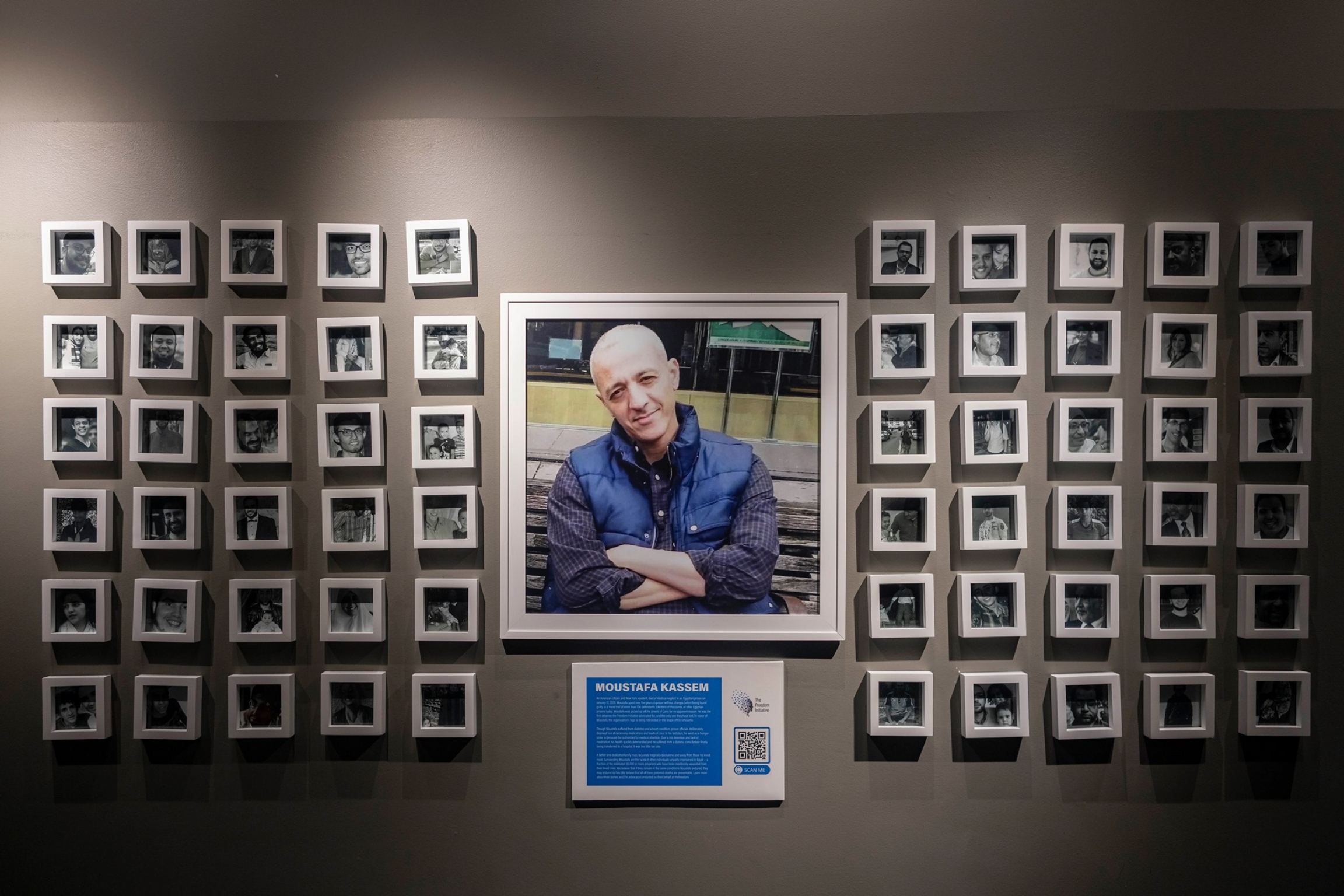 On the one year anniversary of his wrongful death in Egypt’s prisons, Freedom Initiative memorialized Moustafa Kassem, and the thousands that remain resilient in prisons in Egypt with a photo gallery at Busboys and Poets in Washington.

Soltan went into a period of deep introspection and nearly closed The Freedom Initiative. He felt defeated. In Egypt, his father was jailed after Soltan sued former Egyptian Prime Minister Hazem el-Beblawi for his role in torturing Soltan when he was imprisoned in Egypt. 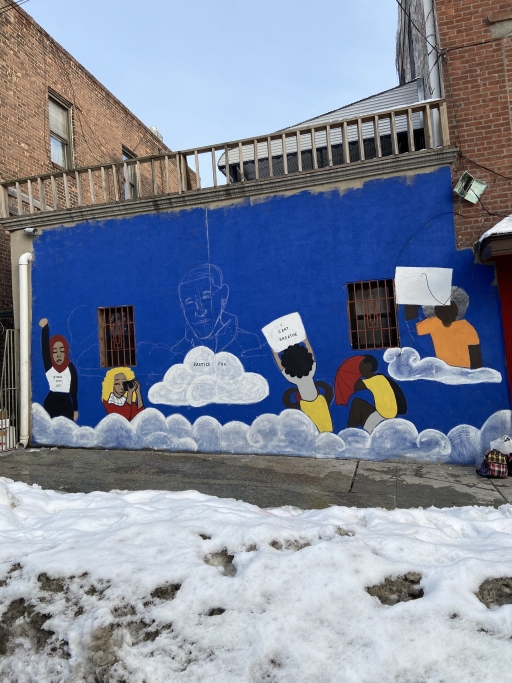 Mural honoring the life of prisoner of conscience Moustafa Kassem in Queens, New York, commissioned by the Freedom Initiative and painted by Brandi Jones of Black Village Arts.

But then Soltan said he remembered that there are tens of thousands of other Moustafa Kassems — prisoners still in Egyptian jails, including a few other Americans that Soltan represents. They relaunched The Freedom Initiative with a new logo that features a silhouette of Kassem’s face. And, they commissioned the mural in Kassem’s hometown, which draws links to human rights causes elsewhere, like the pro-democracy movement in Hong Kong, and the Black Lives Matter movement in the US.

The Biden administration has been critical of the Egyptian government, and there is growing bipartisan support for a tougher stance against the Sisi government. Soltan said the US should use its annual $1.4 billion in aid to Egypt’s military as leverage to hold the country accountable.

Editor's note: A previous version of this audio story referred to a bodega instead of a deli and incorrectly stated that Moustafa Kassem's wife and children are in Egypt.