France faces its second #MeToo wave as several high-profile cases of sexual assault and abuse have bubbled to the surface in recent months.

This time, the movement is focused on incest and child rape in a country with vague age-of-consent laws.

Last week, France’s highest appeals court heard arguments about the case of 20 firefighters who allegedly gang-raped a 13-year-old girl multiple times over a two-year period. A decision is expected next month.

Meanwhile, hundreds of feminist activists have held rallies in support of the girl.

Julie, a pseudonym used to protect the girl’s identity, was 13 years old when she had a seizure at school. A young firefighter was called in to bring her to the hospital. He asked for her number, then shared it with his colleagues, who started contacting her.

Julie says what followed was two years of sexual assault and gang rape by 20 firefighters.

“This is a child who was repeatedly raped by 20 adults who were supposed to be there to save her."

“This is a child who was repeatedly raped by 20 adults who were supposed to be there to save her,” said Julie’s mother, Corinne Leriche, who has been telling her daughter’s story.

Julie fell into a serious depression and made several suicide attempts before she confided in her mom about the ongoing abuse. By then, Julie was 15.

When they pressed charges in 2010, Leriche said the police officers suggested the relationships were consensual.

“The initial reaction from the police was that we shouldn’t believe that Julie was raped ... that she wanted all this to happen to her,” Leriche said.

In July 2019, a judge ultimately took the same position. While three men admitted to having sexual relations with Julie, they insisted it was consensual and never faced any jail time or fines. The judge downgraded the charges from rape to sexual assault.

The other 17 men were never charged.

French law criminalizes sex with a minor under the age of 15 unless the relationship is consensual — creating a gray area in the law that makes it difficult to convict perpetrators.

France faced its first #MeToo wave in 2017. A movement known as #BalanceTonPorc or #SquealOnYourPig garnered mixed reactions — even skepticism.

But this latest wave, centered mostly around cases of child sexual abuse and incest, feels more like a reckoning.

It started last month when Camille Kouchner, a lawyer from a prominent French family, published her memoir “La Familia Grande,” or “The Large Family.” In it, Kouchner accused her stepfather Olivier Duhamel of sexually abusing her twin brother when he was a minor. 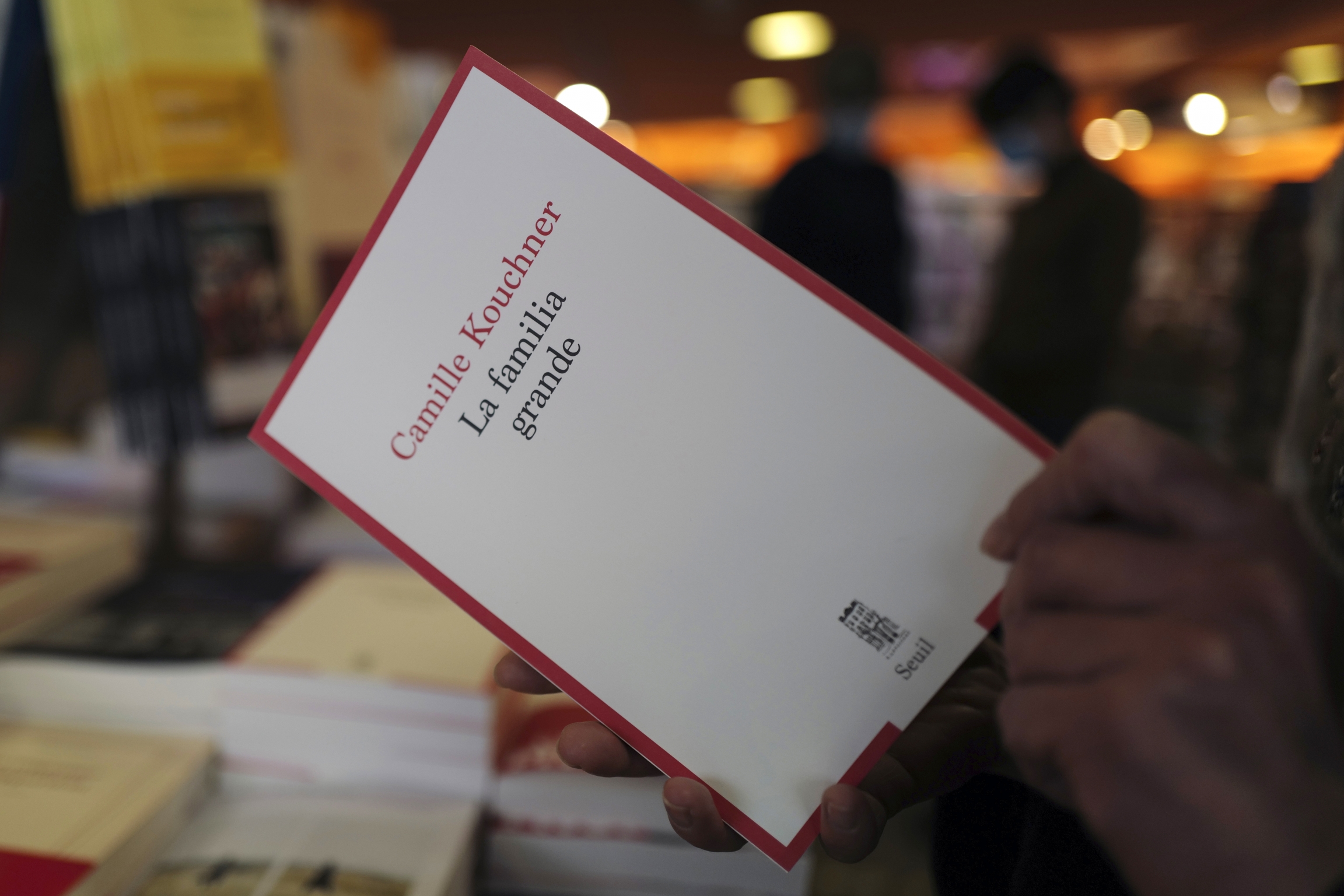 A person holds the book "La Familia Grande," by Camille Kouchner, in a bookstore of Paris, Wednesday, Jan. 20, 2021.

Duhamel, a well-known political scientist and former president of the board that oversees the prestigious Sciences Po university, has denied the accusations but resigned shortly after the allegations came out.

In an interview with French TV last month, Kouchner said her goal was to create awareness.

“There are victims of incest and child abuse all around us."

“There are victims of incest and child abuse all around us,” she said.

According to a November 2020 Ipsos poll, 1 in 10 French people say they are victims of incest.

Duhamel is just one in a series of high-profile politicians, academics and others within France’s elite who have resigned from their posts in recent weeks.

Some have been accused of abuse, others accused of helping cover up the abuse of their peers.

Each story has exposed a common denominator: a culture of silence and complicity in France that has let this kind of abuse continue for years — even decades.

Alice Coffin, a Paris city council member and feminist activist, says the difference today is that the victims are breaking that silence.

“They are starting to get more and more powerful,” Coffin said.

But she said it’s not enough.

“The other way to see it is that the hard structures of power in France are not moving, and I’m talking about the very top.”

Coffin is referring to members of French President Emmanuel Macron’s own cabinet, including Interior Minister Gerald Darmanin, who is under investigation for rape, and Justice Minister Éric Dupond-Moretti who criticized the initial #MeToo movement for going too far.

Last July, Coffin was one of the first to call for the resignation of the former deputy mayor of Paris, Christophe Girard, over his links to the writer Gabriel Matzneff, who last year was charged with pedophilia.

But instead of receiving support, Coffin said she was vilified by a number of her colleagues, even after Girard resigned.

“The resistance of France in all this — and the power of men — is absolutely huge.”

“They made a standing ovation [for Girard] against me,” Coffin said. “The resistance of France in all this — and the power of men — is absolutely huge.”

That’s why Coffin, a former journalist, said there's a need for more women like herself in positions of political power.

While no formal changes to the law have been made yet, France’s justice minister announced last week plans to establish an age of consent at 15 years old.

Any adult having sex with a minor under 15 would be considered rape, with exceptions only made for two consenting minors.

Leriche hopes this will make a difference for her daughter, Julie.

“These firefighters transformed my daughter into a sexual object, they dehumanized her,” Leriche said. “Now, the French justice system needs to give our daughter back her dignity.”

If the court refuses to charge the 20 firefighters with rape, Leriche said she plans to take the case to the European Court of Justice.

Only then, she says, can Julie’s voice truly be heard.