Trump's attorneys sought to halt the trial on constitutional grounds, but lost that bid on Tuesday. Their arguments were meandering at times, leaving Trump fuming over his lawyers' performance and allies questioning the defense strategy. Some called for yet another shakeup to his legal team.

House Democratic prosecutors are seeking to link Trump directly to the riot that left five people dead, replaying videos of the rioters trying to stop the certification of Democrat Joe Biden's victory and Trump's statements urging them to fight the election results.

Senators, many of whom fled for safety the day of the attack, watched the graphic videos of the Trump supporters who battled past police to storm the halls, Trump flags waving. More video is expected Wednesday, including some that hasn't been seen before.

Trump is the first president to face an impeachment trial after leaving office and the first to be twice impeached. The riot followed a rally during which Trump urged his supporters to "fight like hell," words his lawyers say were simply a figure of speech. He is charged with "incitement of insurrection."

"That's a high crime and misdemeanor," Rep. Jamie Raskin, D-Md., declared in opening remarks. "If that's not an impeachable offense, then there's no such thing."

Security remains extremely tight at the Capitol, fenced off with razor wire and patrolled by National Guard troops.

"Joe Biden is the president, he's not a pundit, he's not going to opine on back and forth arguments," she said.

The House impeachment managers described police officers maimed in the chaos and rioters parading in the very chamber where the trial was being held. Trump's team countered that the Constitution doesn't allow impeachment at this late date.

That's a legal issue that could resonate with Senate Republicans eager to acquit Trump without being seen as condoning his behavior.

Lead defense lawyer Bruce Castor said he shifted his planned approach after hearing the prosecutors' emotional opening and instead spoke conversationally to the senators, saying Trump's team would denounce the "repugnant" attack and "in the strongest possible way denounce the rioters." He appealed to the senators as "patriots first," and encouraged them to be "cool headed" as they assessed the arguments.

Trump attorney David Schoen turned the trial toward starkly partisan tones, arguing the Democrats were fueled by a "base hatred" of the former president.

Republicans made it clear that they were unhappy with Trump's defense, many of them saying they didn't understand where it was going — particularly Castor's opening. Louisiana Sen. Bill Cassidy, who voted with Democrats to move forward with the trial, said that Trump's team did a "terrible job." Maine Sen. Susan Collins, who also voted with Democrats, said she was "perplexed." Sen. Lisa Murkowki of Alaska said it was a "missed opportunity" for the defense. 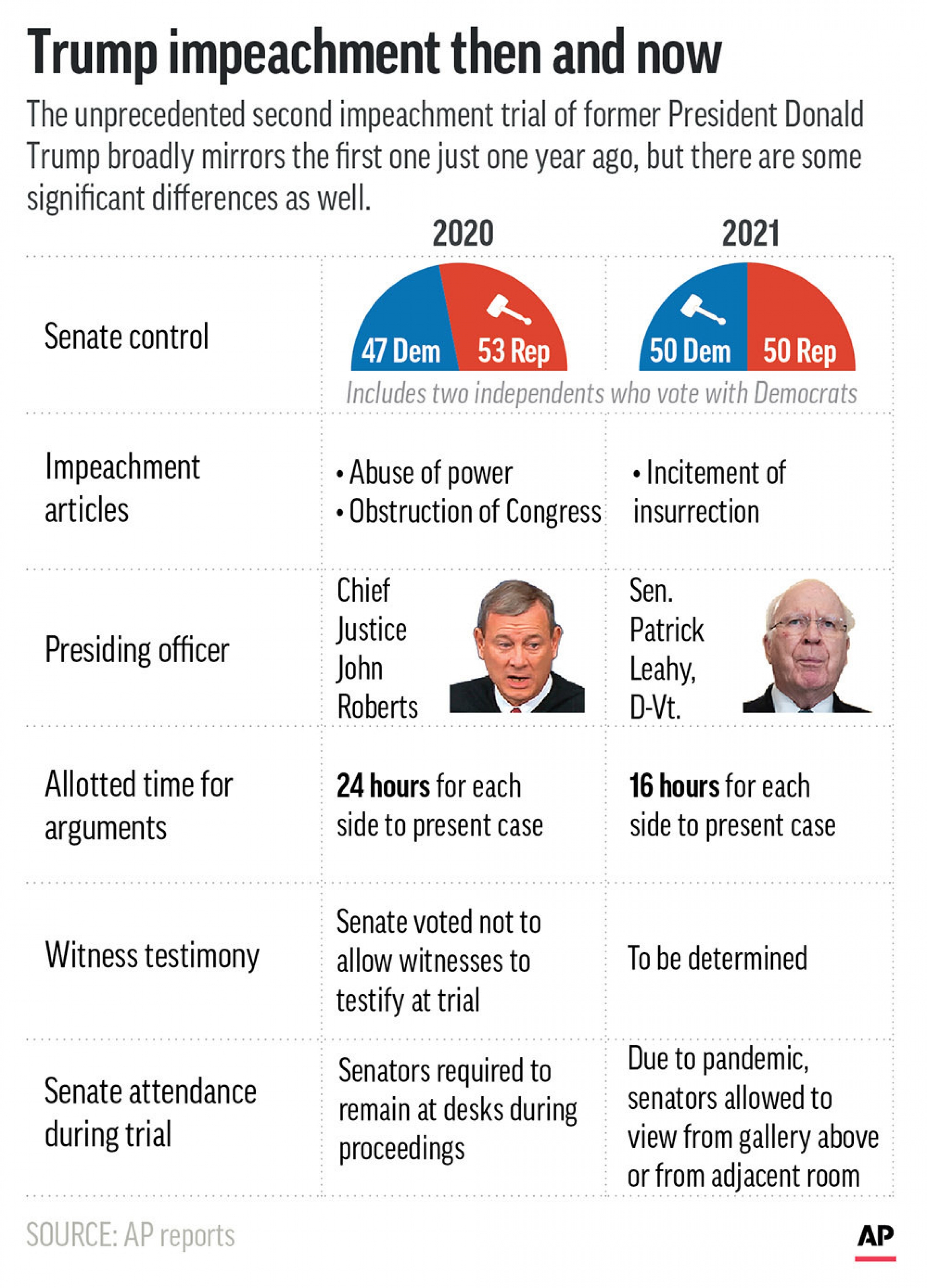 Six Republicans joined with Democrats to vote to proceed with the trial, but the 56-44 vote was far from the two-thirds threshold of 67 votes that would be needed for conviction.

At one pivotal point, Raskin told his personal story of bringing his family to the Capitol that day to witness the certification of the Electoral College vote, only to have his daughter and son-in-law hiding in an office, fearing for their lives.

The House prosecutors had argued there is no "January exception" for a president to avoid impeachment on his way out the door. Rep. Joe Neguse, D-Colo., referred to the corruption case of William Belknap, a war secretary in the Grant administration, who was impeached, tried and ultimately acquitted by the Senate after leaving office.

If Congress stands by, "it would invite future presidents to use their power without any fear of accountability," he said.

It appears unlikely that the House prosecutors will call witnesses, and Trump has declined a request to testify. The trial is expected to continue into the weekend.

Trump's second impeachment trial  is expected to diverge from the lengthy, complicated affair of a year ago. In that case, Trump was charged with having privately pressured Ukraine to dig up dirt on Biden, then a Democratic rival for the presidency.

This time, Trump's "stop the steal" rally rhetoric and the storming of the Capitol played out for the world to see.

The Democratic-led House impeached the president swiftly, one week after the attack.