Throughout the pandemic, TikTok has spawned a number of viral food trends. Billions of videos from around the world have taught users about growing scallions on windowsills, whipping up South Korean dalgona coffee and efficiently folding tortillas.

Now, “foodie TikTok,” as it’s called, has rallied around a West African dish called fufu. Nigerian chef Joyce Etim said fufu — a soft, spongy, stretchy dough — is one of the most common foods in the region.

“Fufu goes with any soup — with okra, with vegetable soup and even with spinach,” Etim told The World.

The carb can be made from cassava, white yams or plantain and is eaten with lunch or dinner. But making it can be a laborious task.

“It’s elbow work. ... Whether you’re using cassava or plantain or a combination of both, they have to be steamed. And then, you have to work the dough.”

“It’s elbow work,” Ghanaian American chef Eric Adjepong said. “Whether you’re using cassava or plantain or a combination of both, they have to be steamed. And then, you have to work the dough.” 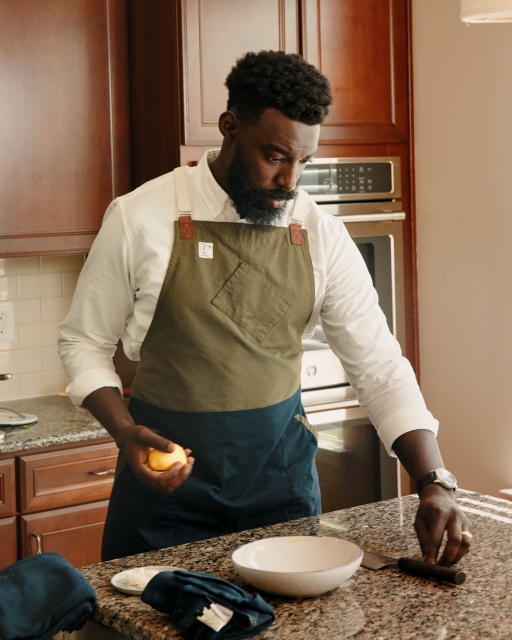 Ghanaian American chef Eric Adjepong is known for incorporating West African cuisine into his dishes. On Bravo’s "Top Chef," he made fufu and egusi soup for the judges.

Adjepong, who brought West African cuisine to Bravo’s “Top Chef” stage, said mashing and pounding the dough into a thick consistency can take up to 10 minutes with the help of a few people. Some people on TikTok say the finished product looks like mashed potatoes. But you don’t eat fufu with a spoon; instead, Etim said fufu becomes the spoon.

Using your hands is integral to the fufu-eating process, Etim said, along with swallowing stew-filled fufu whole.

“Some people who are not familiar with it — they’re the ones that chew it,” she said.

TikTok videos tagged #fufu have been watched more than 310 million times. All this attention on such a staple dish is something Nigerian chef Lola Osinkolu never expected.

“Of all dishes — we have our rice meals, we have beans, we have everything — it’s fufu that’s trending,” Osinkolu said.

Related: Combining and fermenting grains can help nutrition in Africa

The fufu trend is surprising, Osinkolu said — and welcomed. Born and raised in Nigeria, Osinkolu moved to the United States about 10 years ago and said her American friends oftentimes aren’t familiar with Nigerian dishes.

“Oftentimes, you know, the knowledge about African food is limited when you leave Africa. ... So, I’m glad [it’s trending] because the beauty of African food is coming out there to the public. And people are seeing and appreciating it. It gladdens my heart.”

“Oftentimes, you know, the knowledge about African food is limited when you leave Africa,” she said. “So, I’m glad [it’s trending] because the beauty of African food is coming out there to the public. And people are seeing and appreciating it. It gladdens my heart.”

Most TikTok fufu reviews are positive. Users gush over its consistency and taste, while also showing excitement for finding local West African restaurants. But fufu can be an acquired taste, Osinkolu said. Some recipes require a fermentation process, and the dough can taste sour or sweet.

Related: This is the world's only sourdough library

Cameroonian Keith Atowo, one of the most-watched fufu connoisseurs on TikTok, said he’s seen videos of people spitting it out and scraping their tongue.

“It’s OK not to like food, but there’s a difference between not liking food and disrespecting it.”

“You know, that’s not only demeaning, but that’s disrespectful to a culture,” said Atowo, who goes by @keitheats_ on TikTok. “It’s OK not to like food, but there’s a difference between not liking food and disrespecting it.”

If you taste fufu and don’t like it, there are a lot of other West African dishes to try.

Adjepong added that traditional dishes like jollof rice, peanut butter soup and light soup top the list of what he’d like to see Americans try next. Recipes for more West African meals will be included in Adjepong’s forthcoming book, “Sankofa,” which highlights how a lot of US foods originated from Ghana and other countries in the region. Adjepong also offers virtual classes to bring West African dishes to a global stage.

No matter what dish you choose, Etim in Nigeria said she’s thrilled for this focus on West African cuisine.

“Our food — our local food — is becoming very popular. It’s getting attention,” she said. “It makes me really happy and I’m so proud of it.”