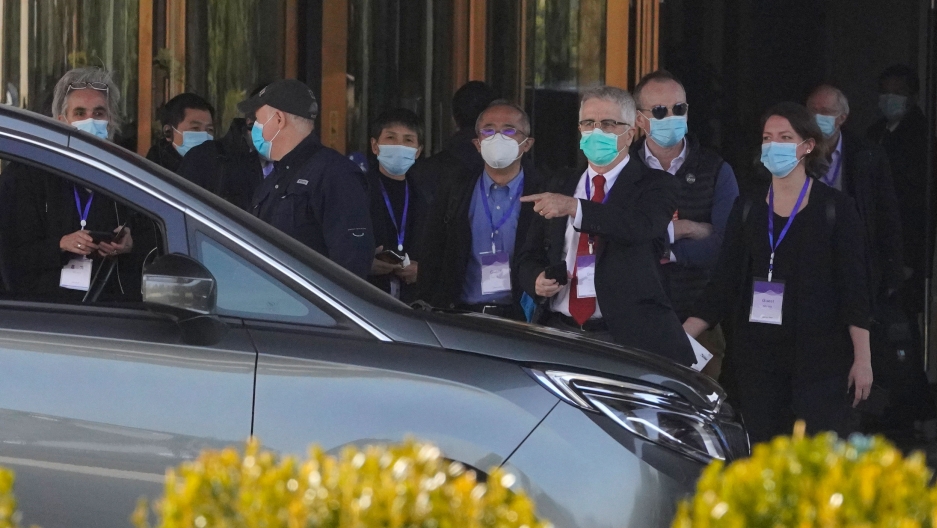 Members of the World Health Organization team of researchers prepare to leave on a field trip in Wuhan in central China's Hubei province Friday, Jan. 29, 2021.

As part of a long-awaited fact-finding mission on the origins of the coronavirus, a team from the World Health Organization visited a hospital in Wuhan on Friday where China says the first COVID-19 patients were treated more than a year ago.

The WHO team members and Chinese officials earlier had their first in-person meetings at a hotel ahead of field visits in and around the central city of Wuhan in the coming days.

"First face to face meeting with our colleagues. Correction: facemask to facemask given the medical restrictions," Dutch virologist Marion Koopmans tweeted in the morning.

She said they were discussing their program of visits and Chinese team leader "prof. Wannian" was joking about some technical glitches, an apparent reference to top Chinese epidemiologist Liang Wannian, who has been a leader of China's response team.

"Nice to see our colleagues after lengthy Zoom meetings," Koopman tweeted. The visiting researchers held video meetings during 14 days of quarantine after their arrival in China. They came out of quarantine on Thursday.

Members of the team left the hotel by car, and a short time later entered the gates of the Hubei Provincial Hospital of Integrated Chinese and Western Medicine. According to China's official account of its response to the initial outbreak, Dr. Zhang Jixian first reported cases of what was then known as "pneumonia of unknown origin" at the hospital on Dec. 27, 2019.

WHO said earlier on Twitter that the team requested "detailed underlying data" and planned to speak with early responders and some of the first COVID-19 patients. It also planned to visit markets such as the Huanan Seafood Market linked to many of the first cases, the Wuhan Institute of Virology, and laboratories at facilities such as the Wuhan Center for Disease Control.

The team's mission has become politically charged, as China seeks to avoid blame for alleged missteps in its early response to the outbreak.

"All hypotheses are on the table as the team follows the science in their work to understand the origins of the COVID19 virus," WHO tweeted.

Confirmation of the origins of the virus is likely to take years. Pinning down an outbreak's animal source typically requires exhaustive research including taking animal samples, genetic analysis and epidemiological studies.

One possibility is that a wildlife poacher might have passed the virus to traders who carried it to Wuhan. The Chinese government has promoted theories, with little evidence, that the outbreak might have started with imports of frozen seafood tainted with the virus, a notion roundly rejected by international scientists and agencies.

A possible focus for investigators is the virology institute in the city. One of China's top virus research labs, it built an archive of genetic information about bat coronaviruses after the 2003 outbreak of Severe Acute Respiratory Syndrome, or SARS.

The first clusters of COVID-19 were detected in Wuhan in late 2019. China has since reported more than 89,000 cases and 4,600 deaths, with new cases largely concentrated in its frigid northeast, where local lockdowns and travel restrictions were being imposed to contain the outbreaks.