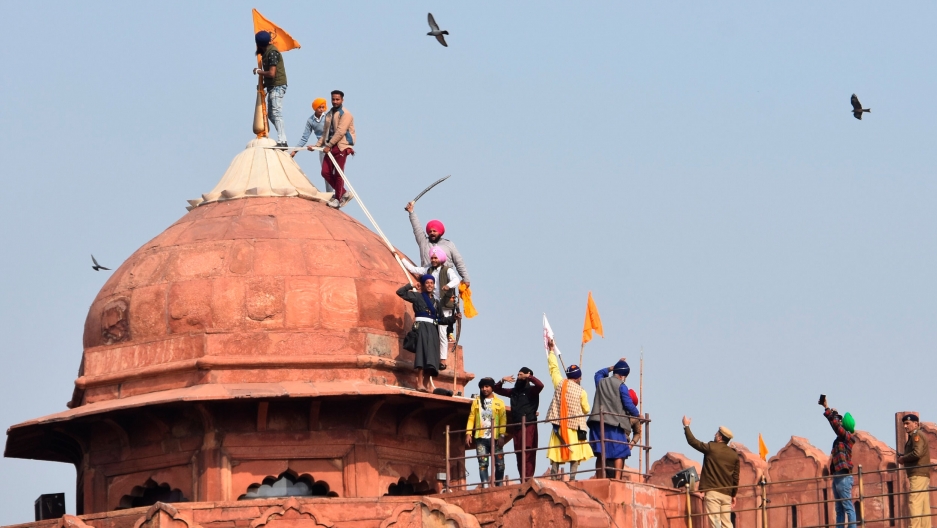 Protesters hoist a Sikh religious flag, on a minaret of the historic Red Fort monument in New Delhi, India, Jan. 26, 2021.

In a symbolic demonstration, thousands of farmers took to the streets of India’s capital on Tuesday — the country’s Republic Day — breaking through police barricades with several storming the historic Red Fort in New Delhi. The demonstration — seen as the biggest challenge to Indian Prime Minister Narendra Modi's government — is part of nationwide protests against agricultural laws that farmers say put their livelihoods at risk.

At least one person has died as the protests turned violent and security forces tried to stop the farmers by firing tear gas. But, farm union and religious flags waved as the farmers marched and drove tractors through the streets, as part of a long-running protest for nearly two months.

“We want to show Modi our strength,” said Satpal Singh, a farmer who drove into the capital on a tractor along with his family of five. “We will not surrender.”

And, new variants of the coronavirus found in the UK and South Africa have caused widespread alarm over the efficacy of the vaccines designed for earlier variants of COVID-19. With a bit of relief, scientists from Pfizer-BioNTech and Moderna have now said that they believe their coronavirus vaccines are still effective, although perhaps not quite as well against the variant in South Africa. Moderna announced the development of a new booster shot that could be used for the South African variant. 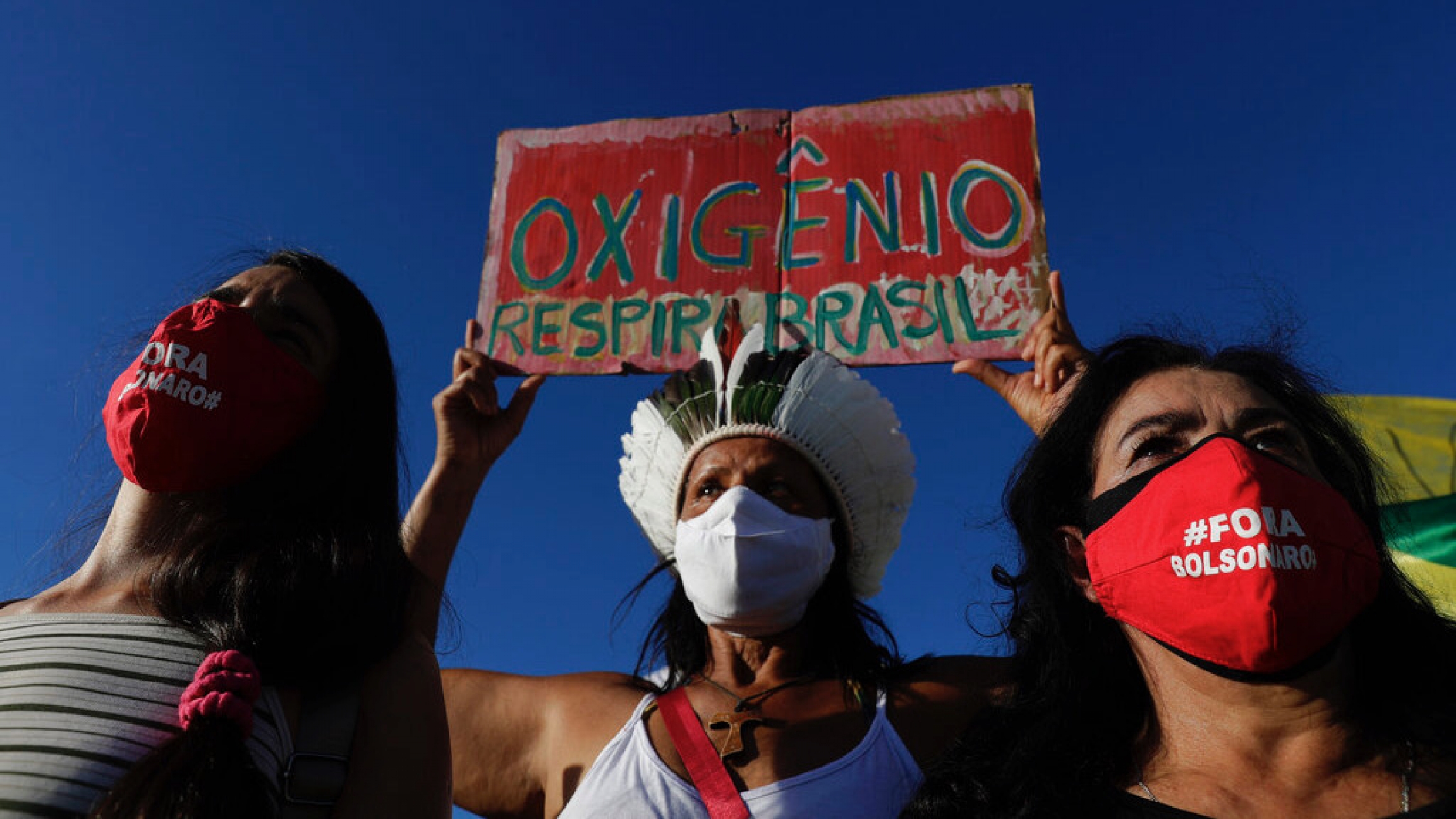 Demonstrators wearing masks with text written in Portuguese that read "Bolsonaro out," and a sign with the phrase "Oxygen, Breathe Brazil," protest against the government's response in combating COVID-19 and demanding the impeachment of Brazil's President Jair Bolsonaro, in Brasília, Brazil, Jan. 24, 2021.

People took to the streets in car caravans in Brazil this past weekend, calling for President Jair Bolsonaro’s impeachment for failing to protect people’s lives during the pandemic. Dozens of caravans were organized not only by Bolsonaro’s longtime adversaries on the left, but also by some of his former allies.

Brazil is one of the countries worst affected by COVID-19, along with the United States and India. More than 215,000 people in Brazil have died from the coronavirus and the infection rate doesn’t seem to be showing signs of slowing down. 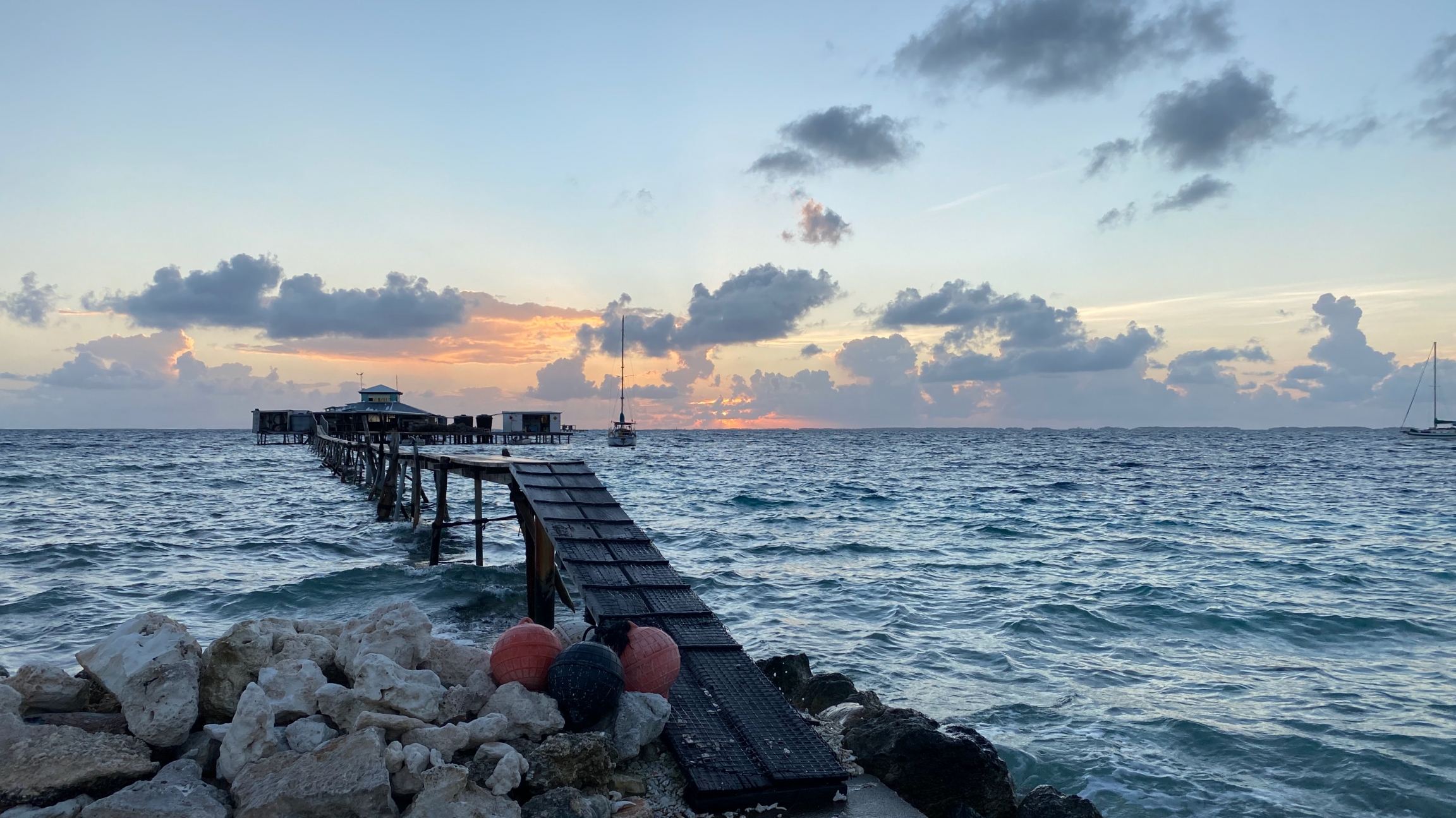 The sun sets on Kamoka Pearl Farm, located on the Ahe Atoll, about 300 miles away from French Polynesia's main island, Tahiti. Owner Josh Humbert says that being environmentally has always been important at this small, family-run pearl production operation.

Pearls cultured in the lagoons of the many islands and atolls that make up French Polynesia are world-renowned for their unique and illustrious colors.

Tahitian pearls, as they are commonly known, are found in many different colors: black, pink, green, blue and brown, with shades in between. Before the coronavirus pandemic set in, the gems accounted for a majority of the French Pacific island territory’s exports — making pearls the second-biggest driver there, after tourism.

But some pearl producers in French Polynesia are contributing in another major way: by implementing innovative sustainable farming practices that help ensure the oceans in which they work stay healthy and thriving.

If you're living in the northern hemisphere, then you might have a growing fatigue of gray, overcast skies, cold temperatures and general winter gloom. Well, geologist Mike Bowers might have the perfect bright spot to start your day. While on a research trip in Brazil, Bowers opened up a volcanic rock and found the very likeness of Sesame Street's Cookie Monster. Om nom nom nom.

Me no geologist, but me think dat rock look a lot like me... https://t.co/444KeOrAbi 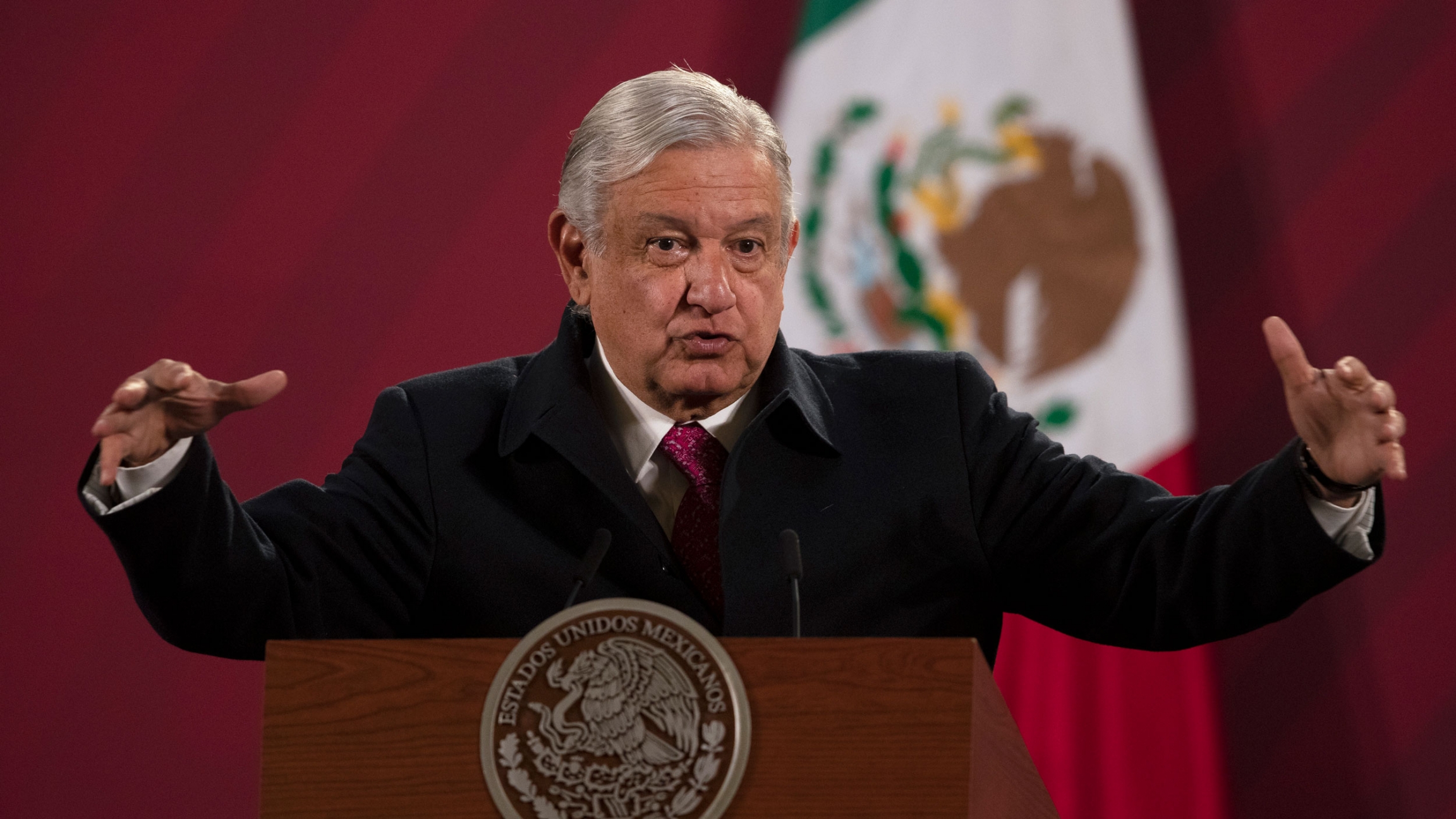 Mexican President Andrés Manuel López Obrador is shown at a news conference at the presidential palace in Mexico City, Dec. 18, 2020.

Mexican President Andrés Manuel López Obrador — known to flout wearing a mask — said Sunday that he has tested positive for COVID-19 and was receiving treatment for mild symptoms. And, civil rights groups are raising concerns about moves by the US Congress to strengthen laws to investigate and charge domestic terrorists suggesting it could result in the targeting of Black and other diverse communities. Also, after being inspired by South Korea's K-pop genre, a band named Ninety One pioneered "Q-pop," or Qazaq-pop, in Kazakhstan.